Posted by Kel
There aren’t many games that will prompt me to not only pre-order, but pre-load as soon as is permitted so I can get down to playing at the first opportunity. If you’ve been reading here for a bit, it’ll come as no surprise when I say that the Sid Meier Civilization franchise is one of the few exceptions. Ever since the guys at Firaxis debuted the trailer for Civilization: Beyond Earth at PAX East earlier this year I’ve been counting down to release day and trying desperately to not let expectations get the best of me. 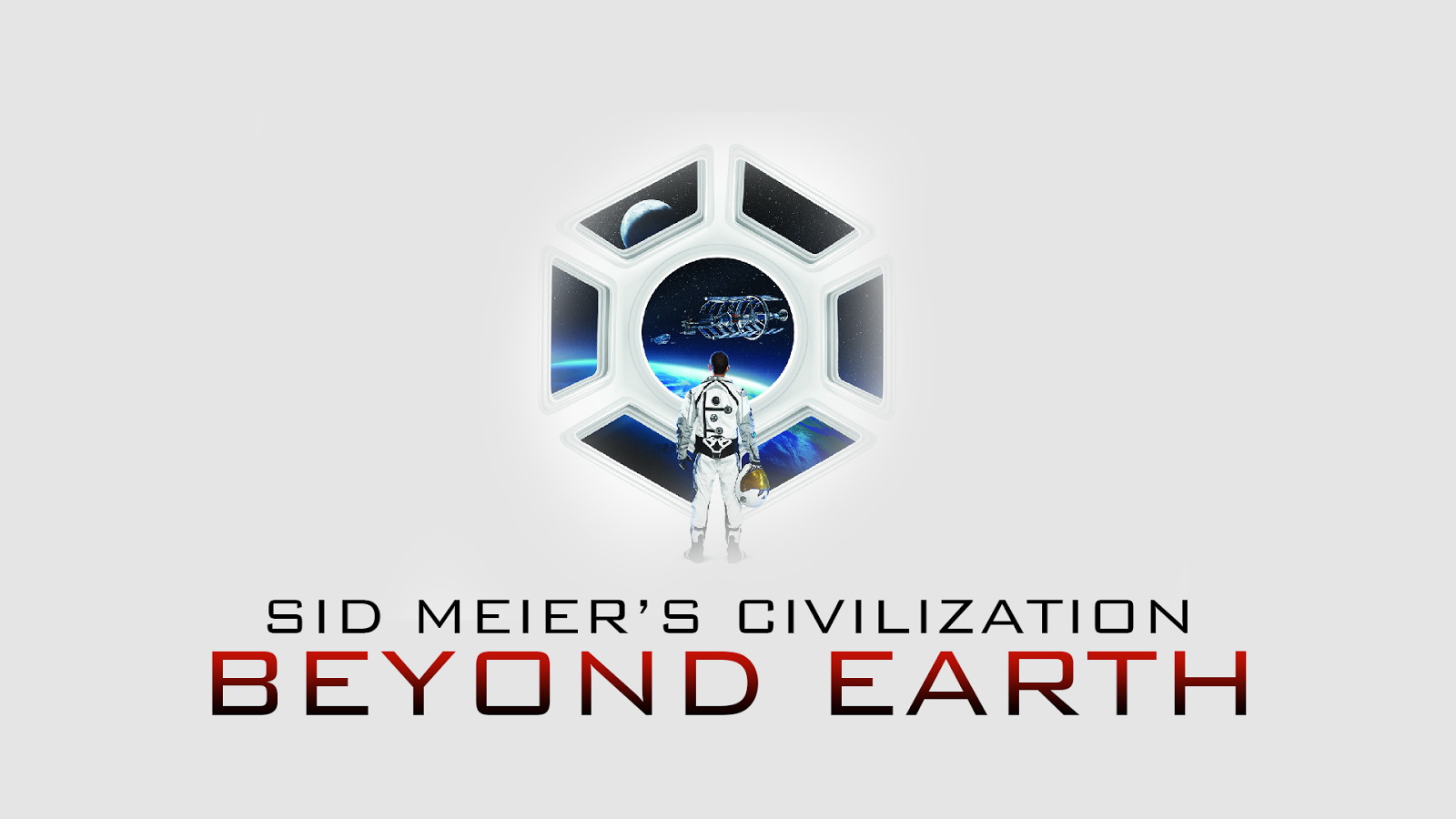 Really? It just kind of looks like Civ in space.

From what I’ve heard and read, the number one cause of disappointment amongst those who have played Beyond Earth is that the game doesn’t resemble other Sid Meier games closely enough. It’s a lot of, “But it’s not like Civ 5,” and/or, “It’s not like Alpha Centauri.” Both of those statements are accurate, but, by the same token, both statements do not take into account what Firaxis had been saying about Beyond Earth throughout the latter’s developmental cycle. The title was not meant to be a re-skin of Civ 5 nor was it meant to be a reboot of Alpha Centauri. Beyond Earth is its own game meant to exist in its own right, so you’ll automatically risk dampening your own experience if you go in expecting it to be an updated clone.

Conversely (and paradoxically), the other commonly held position is that Beyond Earth is too similar to Civilization V, with some gamers going so far as to say that the former plays like a mod for the latter. This vantage is a bit more understandable, as Beyond Earth does draw substantially from its predecessors. The base engine is identical to that which powers Civilization V and the behavior of several units mirrors those from either Brave New World or Civilization IV. This is not entirely surprising given that a considerable portion of the development team also worked on either Civ 5 or Alpha Centauri. The overarching premise is that of your standard 4x and there’s nothing in Beyond Earth that revolutionizes that time-tested format.

The true beauty of Beyond Earth is not a heap of new, shiny features but, rather, is an efficient streamlining of the mechanics that made previous installments of the franchise so beloved. That smoother, less granular playing experience not only prevents frustrations that characterized certain facets of other Sid Meier games, but also serves to bolster the narrative of Beyond Earth. For example, as your civilization earns Affinity points (which we’ll go into momentarily), you are given the opportunity to select Affinity-specific upgrades for your military units. A few clicks simultaneously applies these upgrades to the entirety of your army, effectively preventing the scenario of realizing that you’re still fielding an archer 200+ turns into your game and saving you from having to click on each individual unit in order to modernize them. This feeds into the notion that, as a fledgling colony of humanity in a strange, alien world, you, as the chosen leader, would seek to act with the utmost efficiency.

That narrative is very well conveyed and unflinchingly applied. Some five centuries from now humanity pools its resources in a desperate attempt to flee the dying Earth and gain a fresh start amongst the stars. You can choose to play as one of eight supranational entities, or expedition sponsors, each with their own advantages and drawbacks. Aside from those civ-specific traits, any additional differentiation between you and your competitors comes directly from how you choose to play the game. 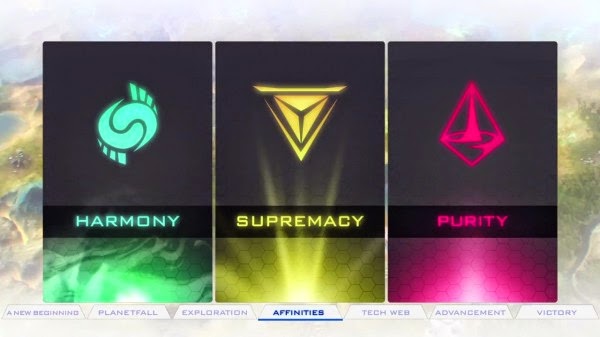 This brings us to the aforementioned Affinities. Depending on which of the five available victory conditions you’re aiming for, you may need to tailor your play in order to align your civilization with the appropriate Affinity. There are three such Affinities: the humanocentric Purity, the extraterrestrial sympathizer Harmony, and the cybernetic Supremacy. Your civ earns points, and thus aligns itself more with an Affinity, by completing quests and researching certain technologies. So, for the first time, you have victory conditions that are at least partially derived from the game’s narrative. Each successive earned Affinity point conveys certain benefits in addition to blanket military upgrades and three of the five victory conditions require a minimum Affinity score in order to actually win.


Quests appear in their own menu throughout the game and vary in complexity from something as simple as “build X number of Y type buildings” to the more involved “carry out high-level espionage missions in Z colony.” Some quests require only that a decision be rendered on set of binary options with that choice having enduring effects throughout your civ. While some of these assignments are the same in each playthrough, others vary based on your Affinity, your conduct within the game, and the other decisions you’ve rendered to that point. That blend creates a nice mix of predictability and randomness and deepens the amount of customization that’s available to players.

The third major driver of customization, and arguably one of the biggest drivers of Beyond Earth as a whole, is the revamped technology system. The neat, linear progression available in the Civilization games is replaced with a literal web populated with ‘stems’ (primary technologies) and ‘leaves’ (secondary related technologies). Selecting the order in which these are researched is semi-free-form and at least partially dependent on in-game events. As a result, you may find yourself occasionally having to research technologies reactively, which will feel decidedly unfamiliar to veteran Civ players. The web format underscores the precarious nature of your existence on your new chosen planet: progress is not a given and the relationships between the mysteries that are deciphered are often complex. 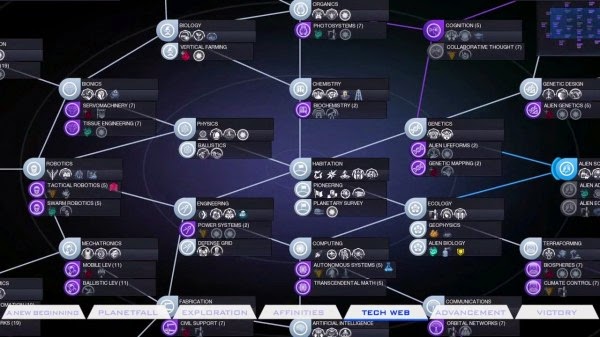 It wouldn’t be a sci-fi game without at least a few aliens, and the creatures that you encounter in Beyond Earth can shift the course of your civilization’s development. Though the extraterrestrials traverse the map in a way that will have you recalling the roving hordes of barbarians from earlier games, their movement and initial introduction to the game is about where the similarities between the two come to an end. The aggression level of the aliens is not a given. They may attack unprovoked, defend themselves only as necessary, or scurry away from your incursions into their habitat. Your interactions with the native fauna not only color how the aliens will treat your units, but shapes your relationships with the other human colonies. Depending on your decisions and your treatment of the aliens, you may end up with a number of them in your army and having command of giant manticores and sea dragons is incredibly fun.


The game certainly addictive (the GIR and I played in a multiplayer game with a friend for nine straight hours during Extra Life), but it’s definitely not perfect and falls somewhat short of being truly impressive. My overall impressions of Beyond Earth are as follows:

- It effectively takes the drudgery out of many facets of the earlier Civ games (e.g. upgrading army     units en masse)
- A Solid, consistent narrative that blends seamlessly into the mechanics for an immersive                 experience. Nearly everything about the game ties back to the concept of
- A very solid multiplayer. The lack of a stable multiplayer option has been the bane of more than one incarnation of Civ, but this seems to have been soundly remedied in Beyond Earth.
- The mechanics do a good job forcing the player to think creatively. Many of the strategies that would work beautifully in other Civ games will not work the same way in Beyond Earth (namely rapid expansion, as your civilization’s total health [the equivalent of happiness in other Civ games] can be quite volatile and must be carefully maintained).
- Diplomacy is considerably less irksome when compared to other Sid Meier games, as each competing civ is similarly struggling to eek out an existence on the new planet. Transactions may involve the usage of favors, which may later serve as leverage, currency, or both.

- The AI, while much better than other Civs, is still prone to stupidity. While there’s definitely fewer instances of suicidal aggression, there’s also plenty of aimless unit movement and headshaking obstinacy.
- The end game is extremely slow, particularly when compared with the brisk pace of the first 100 turns. It’s similar to the base version of Civ 5 where, once you set up your economy/culture/rampaging death army, winning is a simple matter of maintaining the status quo and running out the clock.
- If you're a fan of culture victories, then you will likely find Beyond Earth disappointing. While culture is present, it's substantially pared back when compared to other Civs and serves more of a supporting role than a direct route to victory.

Beyond Earth is an effective successor to Civilization V. It enhances the best parts of its predecessor and makes overall play smoother, leaving the player to focus on building the best possible strategy. The no-frills features, repetition of some quests, and player-driven civilization development can give some gamers the impression that the title is bland. Long-time players of Civilization V may join the ranks of their peers in saying that Beyond Earth is too similar to its forebear. That said, both Civilization fans and fans of turn-based strategy stand an equally likely chance of finding Beyond Earth very enjoyable. It's clear that Firaxis left a bit of room for an expansion and/or DLC which, if they keep to the schedule they've kept with other titles, will be out within a year or so.

It's a must-buy for Civilization aficionados, but everyone else will be served just as well waiting to see if Beyond Earth is featured in the Steam Winter Sale.