Ahh. This whole not having the Doom of Damocles-esque thesis defense lofted precariously overhead is kinda brilliant. The hours previously spent parsing through notes can now be spent on posts that were at least partially written earlier in the year, but were crudely shunted aside by the thesis and an occasional elder hydra. The following was one such circumstantial victim but this will be corrected post haste!

Back in early July, Firaxis Games released Brave New World, the second expansion for the Civilization V base game. While long time fans of the series likely cued up their PCs to begin their pre-ordered downloads from Steam right at midnight the day of release, other gamers have been content to sit back and wait either for a price drop or for affirmation that the new addition would be worthwhile. That skepticism was largely founded in the belief that, akin to previous incarnations of the Civ franchise, expansion packs could be highly variable in quality. Where some expansions provided considerable upgrades in gameplay, others were simple bolt-on additions of new civilizations and their accompanying special units. This reticence is more than understandable. So, if you're in the latter camp and are waiting for a Steam Spotlight weekend or the somehow-already-forthcoming Winter Sale/holiday season, consider the following.

Brave New World is assuredly not just a handful of new playable societies, though nine new civs, eight new wonders, two social policy tracks, two playable scenarios, and twenty new units do come with the game. The new volume is quite literally an expansion of nearly all aspects of the game and specifically addresses some of Civilization V's major shortcomings, not least of which is the infamous endgame stage. More on this in a moment though. The overarching theme of Brave New World is 'make all aspects of playing more active' and the title definitely achieves that goal via these additions/improvements:

Trade - Before Brave New World, the economic portion of the game was largely dependent on city positioning and sheer luck. Either you happened to get a starting location in the vicinity of gold-producing commodities or you laid claim to said goodies from other areas of the map by tactical expansion, conquest, or befriending well-supplied city-states. While the methodology for laying claim to commodities remains much the same, the ability to generate gold no longer hinges on said goods. As you develop your chosen civ, you'll be presented with a new kind of unit: a caravan. This cadre of camels (yes, it's actually a trio of camels) can be sent from your capital to one of several nearby cities or city-states. Hovering over the potential destinations in the accompanying drop-down menu will give you a summary of what the resulting trade route will generate for you each turn. Trading with foreign cities will provide a regular stream of gold and will also act as a conduit for information, in this case scientific research and the tenets of your chosen faith, should your civ practice a religion. As you can imagine, this channel can often be something of a double-edged sword, as your civ will be similarly influenced by its trading partner.

Establishing a route between two of your own cities can allow you to spread resources more evenly throughout your empire and gain a new element of city-level control, as a domestic caravan can transition gold, food or production between cities. Eventually, certain scientific discoveries will allow you to build cargo ships and create overseas trade routes as well. The initial range on trade routes is not great, but the income they provide is substantial. The trade units are defenseless and are vulnerable to plundering by hostile forces, but often such an act is more an inconvenience than a legitimate loss. Active trade routes last for 30 turns, after which they may be renewed and reconfigured and each civ may only build and utilize a set number of trade units (that number being dependant on technological advances and the developmental era).

The trade units make the economic process seem much more vibrant and active. Aside from providing a welcome source of income, trade routes are themselves a new method of control, allowing you to facilitate conversion, hasten research, bestow favor, and send enemies into crippling debt.

Tourism/Great Works - Culture was another facet of the game that had been a largely passive process. You built certain buildings, these generated culture, you synergized that production with certain polities, and so on. Victory by culture was laying the structural foundation to crank out as much culture per turn as possible in order to buy more social policies than your opponents. This victory condition is still one of the more passive options available, but attaining it is now more nuanced and complex. Culture itself remains largely unchanged (i.e. it's a resource generated at a given rate per turn) but Brave New World introduces a new component, Tourism, to the mix. Tourism is essentially aggressive culture, produced solely in order to gain influence over your opponents. Certain structures produce Tourism, but far more can be generated via Great Works. Occasionally your civ will generate a Great Person, either a Great Artist, a Great Writer, or a Great Musician. These specialized units can be deployed locally, putting their talents on display in an opera house or museum, or they can be dispatched to another civ to sow awe amongst the rival populace. A high rate of Tourism generation will also allow your civ to be viewed more favorably by the rest of the world. A well-regarded civ makes for more lucrative trade arrangements and easier diplomatic relations. Other civs often won't realize the extent of your cultural influence until their constituents are speaking your language and have adopted your fashions.

Artifacts - One method for generating Tourism is the excavation of artifacts. Once the 'Archeology' technology has been researched, your civ can build archeologist units that may traverse the globe in search of artifacts, which are reveled on the map akin to new resources. The archeologists are similar in function to workers, but are limited to only one ability: excavate. Once an artifact has been successfully unearthed, it may be displayed in one of your museums and will generate Tourism. The recovery of these precious items can be somewhat thorny, as other civilizations may be irked if you put their relics on display.
Diplomacy/World Congress - Diplomacy was a more active, but often inefficient and unreliable as an actual method for winning the game. The process takes on new life in Brave New World, particularly during the last few eras of play. Instead of sitting half-asleep, writing notes for your RPG between opportunities to click 'Next Turn', you'll find yourself engaged often until the very last click. As you progress through the successive eras, the World Congress will be founded. This new legislative body will provide civs with a tool by which they may foster influence and goodwill or punish their erstwhile neighbors. Civs put forth proposals to the Congress ranging from 'let's build and host a World's Fair' to 'let's enact a standing army tax to make one warmongering civ's economy entirely unsustainable.' Civs are awarded votes based on their civ score, the current era of play, and the number of city-states that count themselves as your allies. As such, city-state relations take on a whole new level of importance. Additionally, your individual voting record can have long-lasting repercussions with other civs, particularly if you helped nix what they felt was an important proposal. 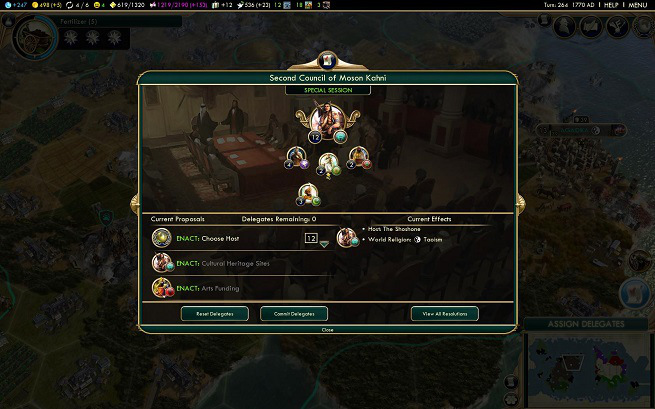 Ideologies - Another manner by which angst or goodwill may be fostered is your choice of ideology. After your civ reaches the Modern Era, you can select an ideology in lieu of a social policy. Each ideology comes with its own benefits and even proprietary wonders you can build. Other civs that choose the same ideology will relate to yours more easily, while civs that choose other belief structures will tend to be aloof, ornery, and easily angered.

Brave New World builds upon Civilization V in such a way as to make the latter a richer, deeper, more enjoyable experience.

Wait, what about multiplayer? That was one of your big qualms about Gods & Kings!

Ah, yes. Someone at Firaxis must have heard my kvetching, because the multiplayer seems to be much more stable and, with the diplomatic enhancements, much more fun.

Speaking of Gods & Kings, do I need to buy that in order to play Brave New World?

No. Brave New World is entirely separate and contains all the critical elements of Gods & Kings, minus the civs that came with the earlier expansion. You do not need to buy one in order to play the other and vice versa.

The AI in Civ 5/Gods & Kings drove me crazy. Is it better in Brave New World?

It's definitely better. Are the cues governing its logic still pretty obvious? Yes. Are you going to mistake it for a human player at any point? No. Is it parsecs removed from the AI in any other Civ game to date? Very, very yes.

This expansion is legitimately impressive and definitely worth a try, even if you've never played any Civilization games before. It's good to see that the guys at Firaxis are still willing to listen to us, the gamers, and are striving to improve on their already impressive product lineup.

And there are 60 new achievements to be had! Woot!