Whether you're a cosplay veteran, an eager-to-learn noob, or just a fan of awesome costumes, we have something for you. Check out the procedurals and discussions that have been featured on the blog, or venture over to our Facebook, G+, or Pinterest pages to access our photo albums or check us out on Instagram to peek at pictures of costumes-in-the-making.
Aayla Secura
Procedural for the vest, belt, headpiece, and wraps
Body Paint lowdown
All About Lekku

Dr. Mrs the Monarch (The Venture Bros.)
Procedural for the Costume

Henchman (The Venture Bros)
Procedural for the Costume

Merida
Procedural for the Costume 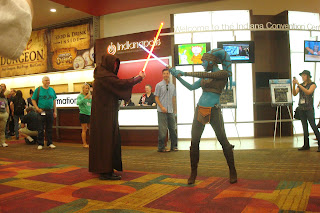