Posted by Kel
We are almost done with our series on the making of Steampunk Hawkgirl. Only a couple pieces of the costume remain in the proverbial un-posted-upon dark, but there's a good reason for the wait: I wanted you guys to have the most comprehensive explanation for how the 'bones' of the wings came together, as they were the most challenging part of this project.

The 'bones' themselves were the result of two phases of construction, the first of which took place not in my little nerdy abode, but, rather, all the way out on the West Coast. My extremely talented cousin and fellow cosplayer, Mel, and her friend, James, generously lent their skills during the early parts of the build. Mel is joining us today to describe how she and James turned some strips of metal into the foundation for Hawkgirl's wings. So, without further ado, here's Mel! 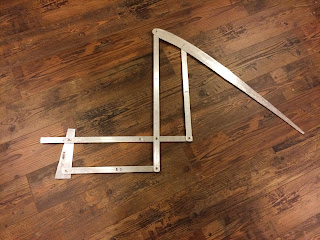 Hi Nerds! I’m Mel and am here to share my contribution to Kel’s amazing Hawkgirl cosplay with you.

I love cosplay. The pride of figuring out how to make something new and the joy of participating in my favorite fandoms is such a rewarding experience and just plain fun. For me, cosplay is at its best when it becomes a team effort. I am lucky to have fellow makers in my life that will go down the costume rabbit hole with me simply to figure out if we can pull it off. Every costume we do usually presents us with a new skill to master and we try to help each other achieve a level of craftsmanship we couldn’t approach on our own. It also keeps things fun when faced with the more frustrating and tedious tasks that costume making comes with. Enter Kel’s latest adventure: Steampunk Hawkgirl!

Kel called me up to debate her construction options and I jumped at the chance to pitch in. First, Steampunk Hawkgirl is just awesome, especially when part of a group Steampunk Justice League cosplay. Second, the particular conundrum of articulating wing construction is something I couldn’t resist. One of my cosplay partners in crime, James, has always loved the idea of making articulating wings, and I just wanted an excuse to run around the house pretending I could fly. Kel had done a ton of research, which you can read all about in her previous post, and was debating which material to use: PVC pipe, wood or aluminum. All three would work, but they each came with challenges. Ultimately, we agreed that aluminum was the best route as it would be lightweight, durable, easy to operate, and aesthetically complimented her desired wing shape. The problem was that Kel lacked workspace and the necessary tools to get these done.

Having done some aluminum work with James on a pair of holster buckles for a Rule 63 Han Solo costume I'd put together for SDCC 2014, I decided to volunteer our assistance. James has completed a great deal of metal work out of his garage over the years so he could save Kel the cost of acquiring tools as well as the headaches associated with the trial and error of learning how to work with the material. As Kel and I live on opposite coasts, we agreed that she would send me her design details and James and I would make the structural components of the wings for her.

Kel’s design was great! She had not only researched and developed a working mechanism for the wings but she built a full-scale mock up out of cardboard to test operation, shape and size. I completely agree with Kel’s advice to do a small and full-scale test of complex cosplay elements out of cheap material that you can work with quickly. This is the stage where you can really refine the design and anticipate any major problems before you put your time and hard-earned cash into the real deal.

Kel passed along photos and the dimensions of her wings, which I used to draw a set of templates using Adobe Illustrator. James and I made our own cardboard mock-up so we could understand exactly what we were doing and what Kel needed.

James did some material tests and determined that we could slim down a number of components so save weight. If we were doing this out of wood the original size and shape of Kel’s design would have been perfect, but aluminum is much stronger so you don’t need the extra material. Since one of Kel’s goals was to keep the wings under 7 pounds, we trimmed wherever we could. After a thorough evaluation, we determined that we could slim down all but the largest piece (the large curved bone at the top of each wing), which gives the wing its awesome shape when extended.

We headed to our local hardware & metal store for materials. Here is what we picked up:

Back at the garage we pulled out the following tools:

After tracing our template pieces onto the aluminum with a Sharpie, James began clamping the aluminum to a worktable and cutting the straight pieces with a jig saw fitted with blades specifically for cutting metal. (General reminder: make sure you wear eye protection! The last thing you want is a metal shard in your eye. There are lots of awesome characters with eye patches, but I don’t think you want to cosplay them everyday.) James cut slowly and steadily to avoid dulling the blade too quickly, but you do want to change the blade often. Metal work will chew right through sharp blades in a surprising amount of time. Buy lots of them and don’t be afraid to toss them frequently. Blades are relatively inexpensive and cutting with a dull blade can ruin your aluminum edges, putting you at greater risk for injury. 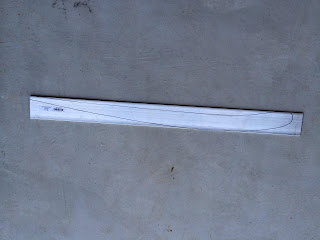 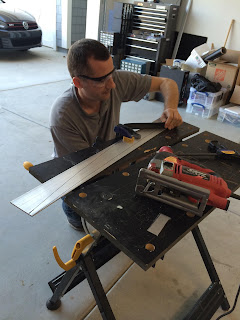 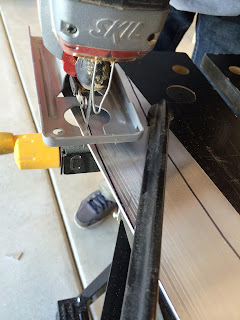 Next up, James cut the largest piece, which has a very distinct curved shape. For this he popped in a fresh blade and cut the piece out staying a little bit out from the marker line. This gave him some room to maneuver if he had a hard time going around a tighter curve or accidentally went off track a bit. Mistakes can happen when you are free-handing this stuff, so give yourself some room to course correct. 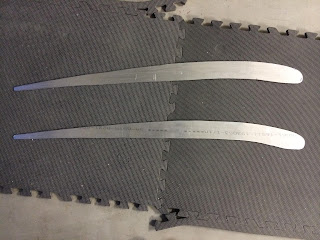 While James cut I began using the angle grinder on the rough-cut pieces. First, I rounded the corners of the straight bar pieces with the angle grinder and made sure there were no sharp edges. Doing this makes the pieces safer to handle and decreases the odds of the corners getting caught on any costume materials when the wings open and close. Second, I used the grinder to shave off that extra bit of aluminum that James left around the curved piece. This got the edge right to the marker line, ensuring an accurate shape. I then used some metal hand files to remove any lingering sharp edges. 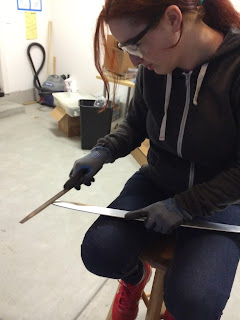 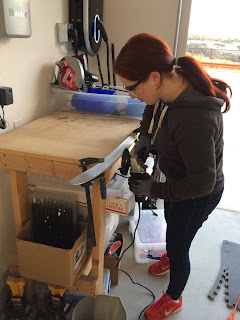 After all of that, I marked where we needed to drill holes for fasteners and James took care of them with his mini drill press (a hand drill would work just fine as well but, hey, if you have a drill press use it!). 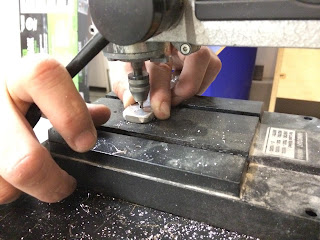 James did some thesis-level research on fasteners. Seriously, I think he could give a full dissertation on how to fasten two moving parts now. This is important because you don’t want to throw a typical screw and a nut on there just to find out that they will unscrew themselves every time you deploy your wings! This is exactly what would happen, by the way. The motion of those two rotating pieces will twist your fastener with it resulting in, surprise, disassembly on the convention floor!

James originally thought he could use nylon-coated screws, as they are known for being a good solution for this type of application, but they, too, failed us. After much googling he determined that a combination of pop rivets and collars would do the trick. We identified which joints would stay fastened forever, which got pop riveted, and then cut a short piece of aluminum rod that is long enough to connect the two aluminum pieces with a collar on each side. Make a little divot on the rod where you want the collar screw to stop and you now have a temporary fastener that allows you to remove them later with an allen wrench. The reason for this is so the wings can completely collapse for storage.

After deploying them a number of times… for science… they got packaged up and made the journey to Kel. Because I was probably just as excited for Kel’s cosplay as she was I made sure I could personally present the wings to her on a most appropriate day, Christmas. 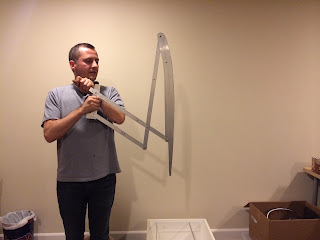 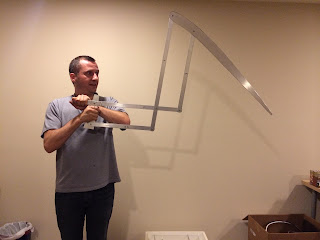 And there you have it. Since Kel did the heavy lifting by figuring out how the wings would work we only needed two afternoons in the garage to make them. This project is a classic example of how cosplay is a whole lot of planning and then relatively quick execution, so do your research and go make something great!