Posted by Kel
And just like that Gen Con 2015 is over. Seriously? It's already over? < 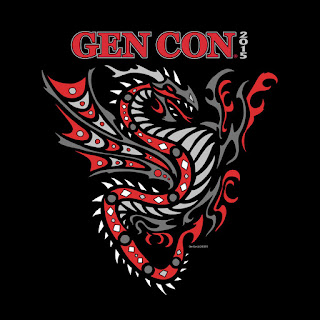 Perennial powerhouse Fantasy Flight occupied their customary spot right in front of the main doors of the dealer hall and their merchandise booth seemed to be permanently ringed by an endless parade of eager gamers. That commercial success, among other things, was confirmed during the annual In-Flight Review. After the powerhouse lineup of new games presented during last year's con, it was unsurprising that much of the 2015-2016 FFG pipeline consists largely of expansions and enhancements to their existing titles.

The publisher's two best-selling games, Armada and Imperial Assault (with the former actually outselling the latter in this calendar year), will both be getting new miniatures. Imperial Assault will also be bolstered by the addition of not one, but two expansion sets. The first such add-on, Twin Shadows, will focus largely on the fringe elements of the Star Wars universe, specifically bounty hunters and elements that were heavily featured in the Edge of the Empire RPG. Twin Shadows is set to be released sometime in September. The second expansion will be the very robust Return to Hoth, which will feature not only new miniatures and missions, but new mechanics for the core gameplay. Return to Hoth is forecasted to be available for purchase sometime during the fourth quarter of this year.

The insanely popular X-Wing will also get more miniatures and a few expansions. Wave 7 of these forthcoming miniatures will include an imperial raider (made with direct input from LucasFilm) and an imperial assault carrier from the animated series Star Wars: Rebels. Rebels will feature heavily in Wave 8, which will include a Mist Hunter and a Ghost.

One of the most highly sought-after games of the year, Forbidden Stars, remains completely sold out and is expected to be on back-order for much of the rest of 2015 as more copies are printed and distributed. More than a few con-goers were disappointed that FFG was not even offering demos of the Warhammer 40K-based title during Gen Con.

While we're in a Warhammer state of mind, FFG offered a bit more exposition on Warhammer Quest: the Card Game. The still-in-development title is said to be a challenging (potentially cooperative) campaign-based card game.

Descent will be getting an expansion, titled the Mists of Bilehall, late this year. Three new lieutenant packs are also in line to be released for the game in the fourth quarter of 2015.

Mission: Red Planet, a resource-management title inherited from Asmodee, has been updated and will be re-released under the FFG banner. You can pre-order copies of the game here. Interestingly enough, aside from a few high-level remarks concerning distribution at the incept of the In-Flight Review, this was the only explicit mention of FFG's blockbuster merger with Asmodee.

Fantasy Flight's single most-requested reprint, Runebound, is going to go beyond the printhouse and get a brand new incarnation. Aside from the title and a few core mechanics, this iteration of Runebound will bear no other resemblance to other games that have borne the same name. FFG has painstakingly re-imagined the title and is slated to bring it to market in time for the holiday season.

Speaking of releasing in time for a holiday, the third edition of the classic Fury of Dracula will hopefully be hitting the market just before Halloween.

The Lovecraftian Eldridge Horror will get a new expansion: Strange Remnants. The add-on was designed to effectively gameify the use of the expansions without the game itself taking up the entirety of your gaming table. The title will be available for purchase during the third quarter of 2015.

One of the most sought-after demos of Gen Con 2014, Shadows of Brimstone, continued to be a powerful draw for Flying Frog. The publisher garnered additional attention via an intricately painted 3D board depicting the worldscape of the expansion Swamps of Death.

Some of the most sought-after badge swag at the con came from the demo table for Nefarious: the Mad Scientist Game. This fast-paced card game pits the sinister machinations of the world's most dastardly villains against one another. Players seek to out-invent, out-scheme, and out-maneuver one another as they attempt to take over the world. Nefarious can accommodate 2-6 gamers and is designated as being appropriate for ages 13 and up.

Wizards of the Coast (WotC)

The 5th edition of Dungeons & Dragons continued to reign over much of the convention. WotC allowed gamers to partake in the first scripted adventures associated with the Rage of Demons Adventurers League season that will be available at your friendly local game store beginning this September.

As in previous years, the vast majority of my Gen Con trip was spent with small and independent game developers. Also akin to other years, those developers put forth some truly innovative and impressive offerings. The following titles definitely succeeded not not only providing a memorable playing experience, but lingered long after the dealer hall had closed.

Aetherium (Anvil 8 Games) - This was my very first demo of the con and it set the bar pretty darned high. Take many of the core mechanics from Imperial Assault, add in several fun tactical twists, and set it all in a phenomenally well-imagined cyberpunk universe. It was one of the most satisfying and fine-tuned miniatures games that I've had the pleasure to play. Do yourself a favor and check out the website.

Campaign Trail (Cosmic Wombat Games) - This clever game runs players through, as the name suggests, the run-up to a presidential election. Careful resource management will allow you to level up from basic grassroots campaigning to call upon a mighty war chest that will bring you to the Oval Office. The title can be played head-to-head or co-op with teammates taking on the role of Vice Presidential hopeful. This game will be the subject of its own Kickstarter beginning on September 14th.

Tesla vs Edison (Artana Games) - The end product of one of the most successful Kickstarter campaigns of the year, Tesla vs Edison generated quite a bit of convention buzz despite being tucked away towards the back of the dealer hall. As the name suggests, Tesla vs Edison allows players to shape the course of electricity development in the United States via the invention of new technologies and ruthless business practices. It's marketed as a 'medium-level' strategy game, which is a pretty spot-on descriptor, and will appeal most to fans of euros and those gamers who can't get enough Power Grid. Fair warning, if you're a person who doesn't like stock market or bidding mechanics in your games, this title probably isn't for you. That being said, Tesla vs Edison does an admirable job with its theme and, if you're into its mechanics, is absolutely worth a try.

Zephyr (Portal Dragon) - This competitive tabletop game continually surprised throughout the course of the demo. Set in a beautifully crafted steampunk universe, Zephyr was as satisfying to play as it was on the eyes.  Players captain, outfit, and equip their own airship in the hope of successfully resolving the missions set before them. Zephyr is a wholly modular experience that can appeal to both board game novices and seasoned veterans alike. The game is set to be featured in its own Kickstarter during the fourth quarter of this year.

The Indianapolis Convention Center definitely seemed more crowded this year, and that sensation was validated when Gen Con released attendance figures. 61,423 unique con-goers graced the halls, a 8.49% increase over 2014's turnout. While that increase is markedly smaller than what we've seen in previous year-over-year periods, the fact that we're now dealing with over sixty thousand con-goers was palpable. It'll be very interesting to see what future years will look like given that the infrastructure in and around the ICC is already highly strained.

As for costume news, our steampunk take on the Justice League was very well received. It was the first time many of my friends had ever cosplayed and they all really seemed to enjoy the experience. Seeing them having so much fun gave me all sorts of happy feels. Maybe we'll make this whole group cosplay a regular thing for Gen Con. We costume up pretty nicely, don't you think? 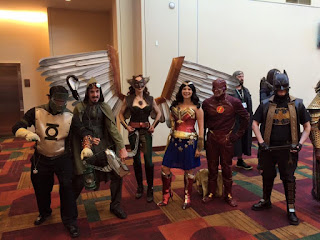 I'll go into all the details about the individual components of Steampunk Hawkgirl via updates on the tutorial posts. On the whole, not gonna lie, it was simultaneously the most rewarding and most frustrating costume I've ever done. A lot of things went wrong at the last possible minute, resulting in a handful of components going unused. Similarly, a few of the functions of the costume weren't behaving as they were supposed to on Cosplay Saturday, so they were effectively shelved. That being said, the final product didn't turn out too badly.

Until next year Gen Con!