Cosplay: I Believe I Can Fly

Posted by Kel
Oh man, I’ve wanted to chat about this with you guys for weeks now but, given the sheer number of cosplay posts that were published over the course of the summer, it seemed like a mini-sabbatical from the subject was in order.  Normally that sort of hiatus would come about naturally, much same way that you’d probably take a few weeks off from running after completing a marathon. This year, however, is very different; there was no exhausted pause, only a rush of planning amidst a deluge of SQUEEs.

Yeah, I almost certainly do, but this obsession very early stage planning is for an extremely good reason: I’m making wings!

Ok, let me back up a bit. It’s the last day of Gen Con; the GIR and I are perusing the dealer hall with a group of our friends searching for last-minute deals and creative ways to coax additional storage space from our luggage. The GIR comes across a stunning steampunky leather vest emblazoned with the Green Lantern insignia and, in a it’s-close-enough-to-your-birthday move, I buy it for him. The transaction is enough to convince our friend, who’d been eying a similar piece with a Batman theme, to go ahead and make his own purchase. As the boys marveled in their new finery we were collectively stricken with inspiration: what if we did a group cosplay as steampunk Justice League?
That, my friends, is exactly what we’re aiming to do for Gen Con 2015. Now I’m not normally big into steampunk, but I do enjoy the Justice League and the premise of finally getting to do a group cosplay with our friends. In the weeks since then roles have been selected, ideas have been brainstormed, and concepts have been drafted in both physical and digital form. It’s still pretty early, but, given the added complexities of coordinating a group venture, the extra time will likely come in handy down the line.

Exactly. I’d initially considered revamping my Mera costume to make it steampunky, but honestly I like it too much as it is right now. The characters of Hawkman and Hawkgirl provided the GIR and I with some of our initial bonding-over-comics moments back in the early days of our courtship and they play a significant role in Blackest Night. So Hawkgirl had been in the back of my mind as potential cosplay fodder for years but the prospect of recreating her beautiful trademark wings always seemed to invoke a bit of anxiety.

As we talked about a little while back, it’s no secret that making wings is one of the few almost universally agreed upon Majors in the costuming world. Even the simplest set of wings is rife with complications that you wouldn’t normally consider when building or wearing a costume. It’s added steps to your construction process, more parameters for your day-of logistics, and potentially more things that can go wrong. They can end up weighing quite a bit and, even if they’re light, you’re almost assuredly less agile while wearing them, particularly in a large crowd.

And yet, despite all that could go wrong, there are few more impressive things than a set of wings done right.

When I first dipped my toes into the proverbial cosplay waters some ridiculous part of me whispered through the post-convention exhaustion: Hey, one day it would be amazing to make wings. Several years and nearly a dozen costumes later with 11 months of potential crafting time, that opportunity has arrived. So over much of the next year there’ll be periodic updates about this undertaking as well as separate posts about the other components of the Hawkgirl costume.

Construction actually began about two weeks ago, so there’s already been some progress on the wings that we can chat about. Before you set about doing research, it can help to ask yourself the following questions:
Your answers will help narrow the scope of your subsequent planning.  Once you’ve got a rough idea of the look, scale, and maneuverability that you’re aiming for, you can start to get a feel for what sorts of frameworks will best suit your project.


Frameworks, sometimes referred to as skeletons, are the base for all your future wing-y goodness. For stationary projects, frameworks can take on just about any shape or be supported by any variety of things like, say, a 3-ring binder that’s been gutted for parts. Articulating wings, or wings that will be able to move via one or more joints, tend to take on one of a handful of tried-and-true frameworks: single hinge, extending arm, or fan blades.

Single Hinge Wings are exactly what they sound like. The height of the wings comes directly from a pair of stationary ‘bones’, one per side, which are each connected to a respective set of secondary ‘bones’ that reach out away from the wearer via a single hinge point (usually near the top of the primary bones). Wings built in this style to be inexpensive, versatile, and capable of impressive wingspans but they can also be heavy and, if they’re made with too much stress on the hinges, can bend or even break. The video below is a great example of single hinge wings.
Extending Arm Wings basically use the same weight redistribution principles that you see in some desk lamps or clothes drying racks. It’s also a structure that’s similar to the anatomical makeup of an actual bird’s wing. Extending arm wings do a very effective job at distributing the stress associated with the weight of the wings themselves and have the benefit of being able to fold down, thus allowing for easier crowd navigation. They are also more complicated to build compared to their single hinge brethren and, with more moving parts, may have a greater probability of something going awry. 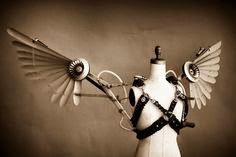 Fan Blade wings are a more complex version of their single hinge counterpart. Think of a paper folding fan; there’s the initial pull on the lead ‘bone’, which transfers the motion to several successive blades via a connected cord or membrane (in this case the paper portion of the fan). These types of wings are often very visually striking, but are arguably the most complex in terms of what goes into their construction. Additionally, fan blade wings have the most moving parts of the the varieties we've talked about and, since all these parts depend on a single component, have the highest likelihood of a catastrophic break.

Of course, there are definitely more types of wing frameworks than the three presented here, but these are solid starting points and each can be easily modified to suit the needs of your particular project.

After a bit of research and more than a bit of math, I decided that extending arm wings are the way I'm going to go with the Hawkgirl costume. There is one readily available tutorial on how to make a basic set of these, but, just a heads up, there are a few holes in that procedural and the recommended materials aren't be quite strong enough to be load bearing. Still, it's a decent enough foundation and a great way to familiarize yourself with how extending wings work.

Once you've selected a framework, it's a very, very good idea to do a test of it on a small scale. Since wings can require a lot in the way of time and resources, you'll want to nail down exactly what works and what doesn't before sinking your hours and cash into the project. I built this 1/3rd scale mock up out of a few brass paper fasteners and old cardstock we had lying around. 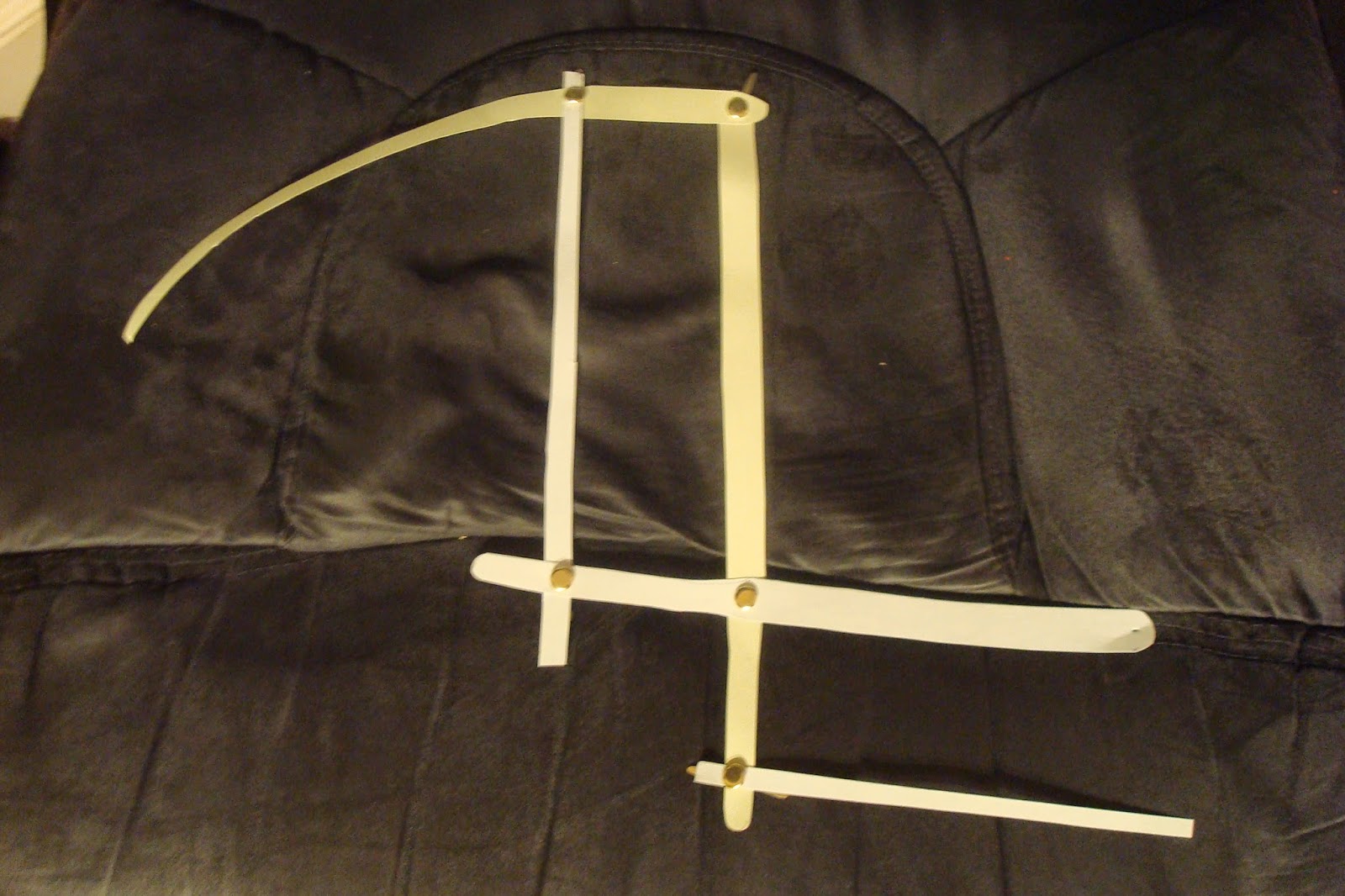 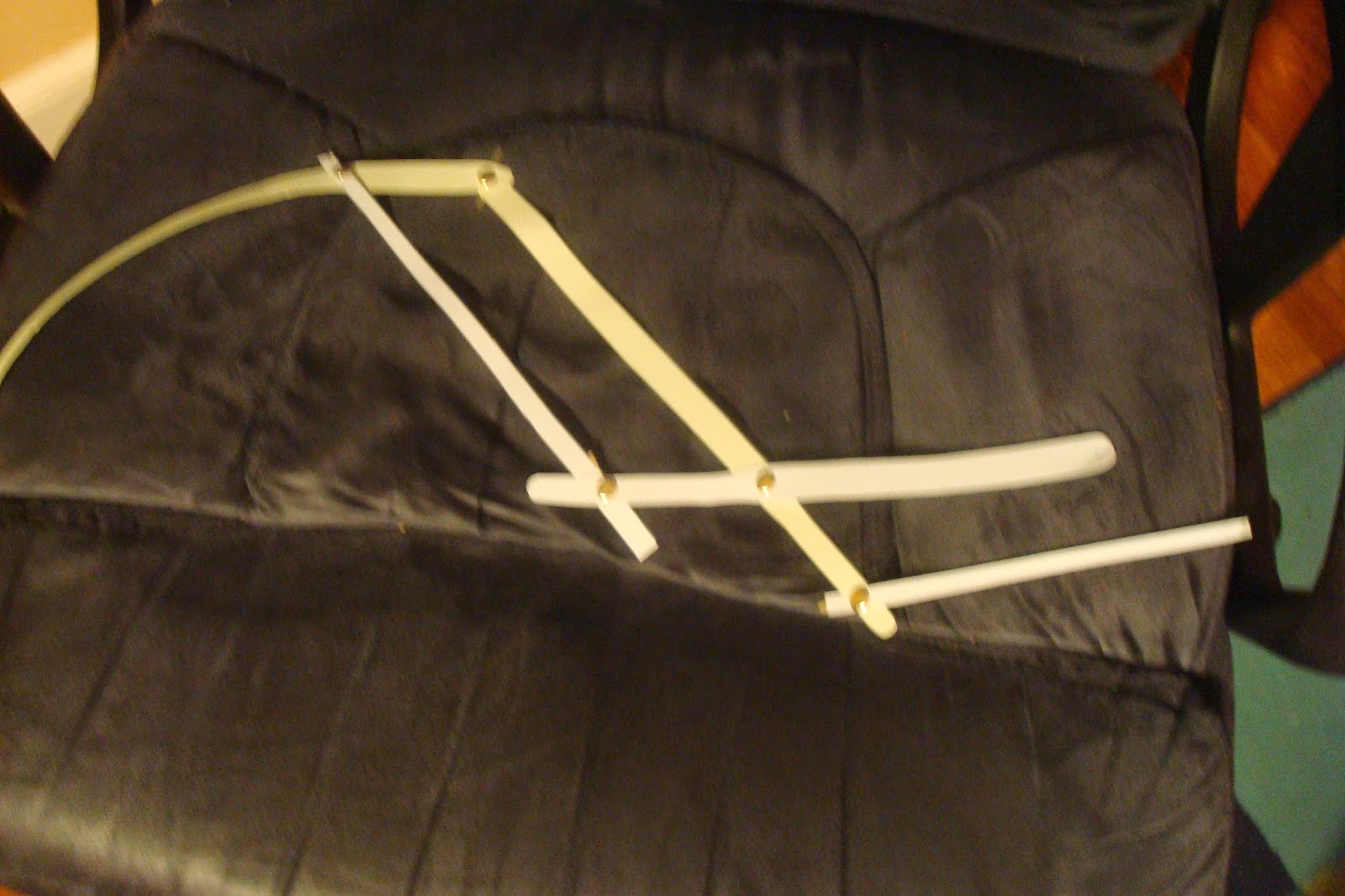 Test #1 was a success and opened up a few possibilities with the design that I played with in subsequent tests (namely that I wanted to see if connecting the bottom horizontal bone and the leftmost vertical bone would give the wings more structural stability; it didn't).

After this I built a full-scale mockup of the wings out of cardboard and more of the brass fasteners. Once it was clear that yes, they moved and worked as I hoped they would, I mounted them onto a corset for more testing goodness and got them to extend via pull 'cables' made out of fishing line. I'll provide all the steps and measurements I used for the skeleton in the post that will cover the final version of the framework. So, until I get that finished, I'll leave you with some pictures from Tests 3-6 (Test #2 was such a colossal failure that it merited no photos, just laughs). 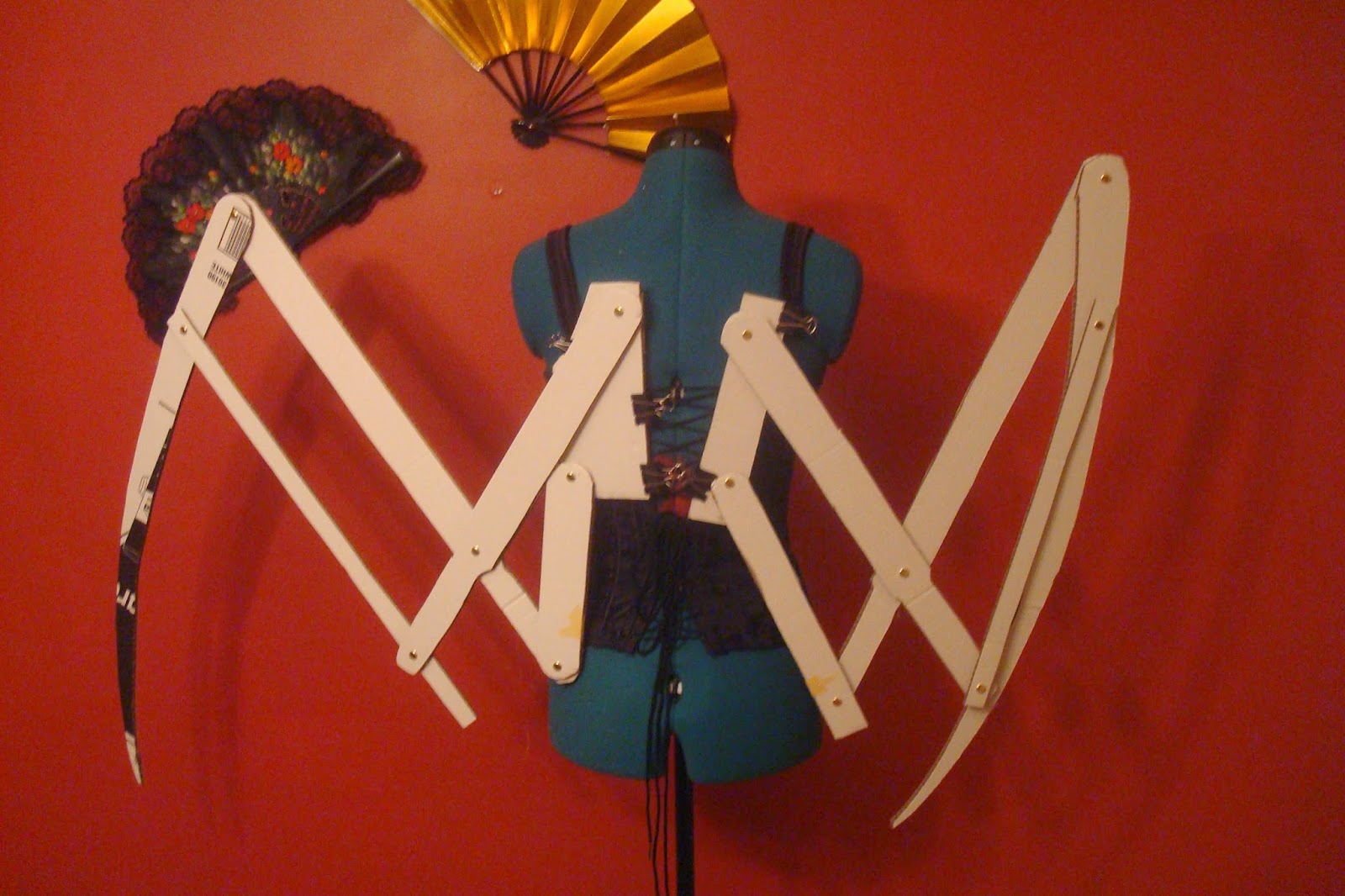 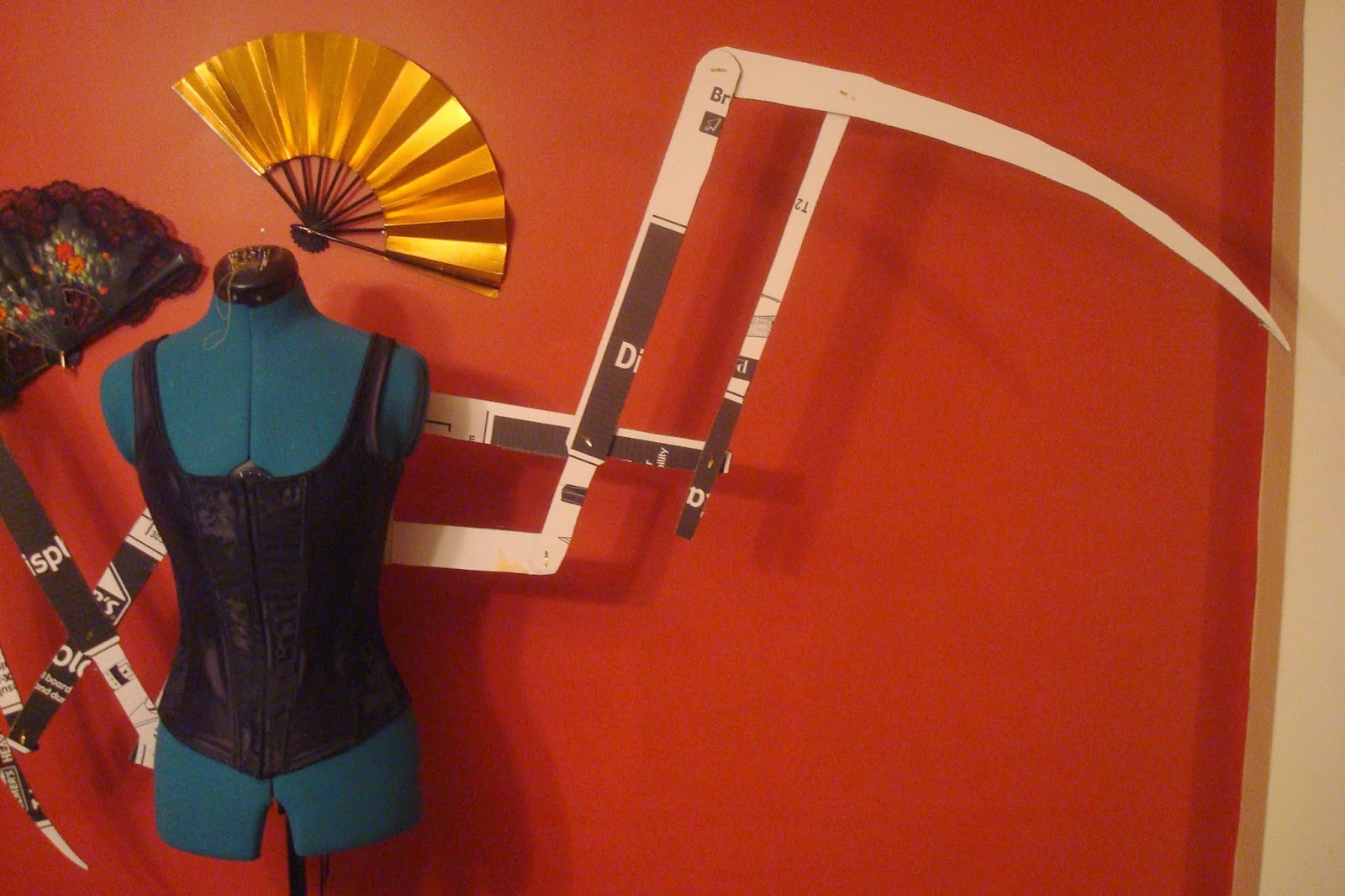