Nerd Life: the 1UP of One-Upsmanship

Posted by Kel
Maybe it’s just how the timing of Gen Con worked out this year or perhaps it’s just lingering con-happy, but these past couple of weeks have been such an all-around excellent unofficial end to the summer. Don’t get me wrong, making all the costumes was definitely fun, but after putting together four of them this year, it’s nice to just be able to tinker around without a deadline looming in the periphery.

Another benefit of this post-con hush is having the time to go back over the heap of notes I’d scribbled down at one point or another and trying to parse through them. In the corner of one notebook I’d jotted, “Why do we constantly try to one-up each other?” There was no surrounding context, but that single line caused whatever other investigation I’d been doing to grind to a halt.
Defensiveness set in almost immediately. We don’t constantly try to do that. Other social groups probably engage in one-upsmanship with the same frequency… And then the memories and the stereotypes poured in. Well, maybe that’s just my perception of a behavior. I'm clearly too close to the source material here. To the scholarly journals! 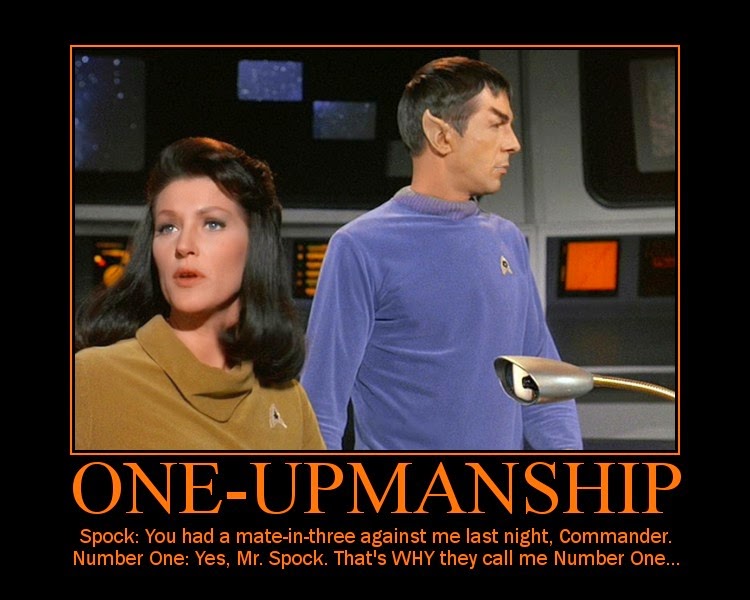 This impromptu and highly unscientific data rustling still managed to yield some basic facts for us to work with (largely due to the fact that highly competitive behavior has been studied extensively as it pertains to group dynamics and various emotional disorders ). Competition as it is expressed between two or more parties as direct social contests is often related to low or fragile self-esteem, narcissism, and/or the cumulative impact of being in a competitive environment for a prolonged period[1].  Additionally, individuals behave more competitively towards one another when the number of competing parties is small[2]. Both of these sets of phenomena feed directly into another related behavior called social comparison. The name pretty much encompasses the entirety of the mechanism: it’s that semi-conscious thing nearly all humans do when they stack themselves up against features and accomplishments of another human. And it literally is nearly everyone that does this, even when the act of comparing would yield no useful information to the person doing the comparing[3].

So given all this we can begin to extrapolate a bit into the roles social comparison and direct social contests play into our games of nerdy one-upsmanship. Let’s start with the first of the major characteristics from the above paragraph: low or fragile self-esteem.

It’s no secret that many of us had a difficult time interacting with our peers during our formative years and that we often carry the resulting scars for quite some time. That shared experience of shame, bullying, and isolation lies like a bitter foundation beneath our subculture. It’s one of the myriad reasons why some of us react with hostility when we encounter newcomers as those would-be neophytes are assumed (correctly or not) to have grown up having avoided our widely held childhood fate. Correspondingly, many of us have constructed a large portion of our sense of self from the body of knowledge we’ve built up in the pastimes that sustained us through this turbulence. These hobbies sustained us, at least in the figurative sense, and we often respond to that by giving ourselves over entirely. Any subsequent challenge (or anything that is perceived as a challenge) to that body of knowledge is translated as a threat to the identity we’ve constructed for ourselves. Since the challenge is in an arena that we’re deeply experienced in, the fight-or-flight response often ends up with the ‘target’ nerd selecting the former of those two options.

That’s usually how one-upsmanship comes to pass in the context of standard self-esteem. However, a growing body of research suggests that there is a wide variety of self-esteems or, probably more accurately, states in which self-esteem exists[4]. People with fragile or otherwise unstable visions of self-worth often tie their self-esteem directly to their last accomplishment or whom they are able to impress. “When these individuals are doing well, they feel great or even superior to others, whereas when they encounter setbacks, they tend to feel shame and self-doubt.”[5] So, in a community rife with individuals with low self-esteem AND who characterize themselves upon the level of knowledge held on a variety of shared, lauded topics, one-upsmanship seems like an almost natural reaction. We can’t all know the most about Star Wars or Marvel or Lovecraftian lore. The closest we come to détente is compartmentalization within our respective circles of immediate friends. There’s a wordless understanding of, “Person X is our D&D expert and Person Y is our go-to for physics.” Everyone gets to be a specialist in something and thus everyone can feel confident in their personal body of knowledge. This model functions so long as membership in the friend circle is stable and tends to degrade if a new member is added or the circle encounters another circle. Then it becomes, “Well all my friends know I’m the biggest Trekkie there is and you, rival Trekkie, will have to be put in your place. There’s only room for one of us.”

That last set of statements is what professional psychologists call the Scarce Resources Model. I like to call it the High Noon Saloon Model: there’s only room in this here saloon for one of us. Under this schema we feel jealous and/or threatened when another nerd exhibits more knowledge or skill because we (erroneously) believe that There Can Be Only One. The only way to prove that we are the best or most knowledgeable is to publicly prove how superior the functionality of our cerebral matter is OR instill doubt in the other geek’s purported skill. Hence one-upsmanship. 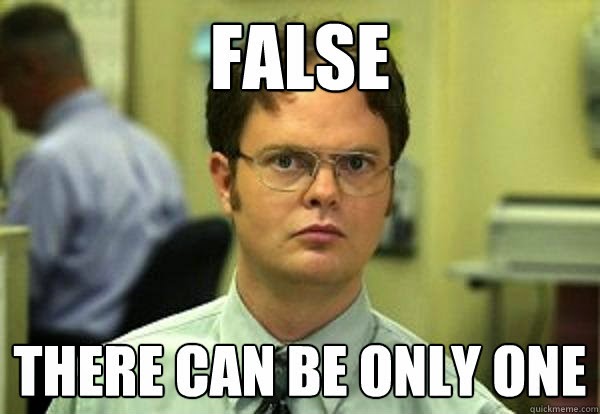 Sometimes the response we just talked about isn’t derived from insecurity or poor self-worth, but rather from the polar opposite. Narcissistic or highly self-centered nerds, “…do not see others as separate human beings, but more as an extension of themselves, a source of admiration for their accomplishments, a potential threat to their own success, or as an object to use or manipulate in order to meet their own needs.”[6] In this case the one-upsmanship is rooted in the notion of There Can Be Only One, but the key differential is the motivation behind that model. Narcissists believe that they are inherently the best and thus are the natural or even rightful deserving One. Aggressive intrapersonal competition in this case is often a combination of adverse reaction to reality being different than what the narcissist holds to be true followed by a desire to bring the opposing ‘combatant’ low via one-upsmanship as an attempt to restore what the narcissist believes to be the natural order of things. While I’ve separated these motivations for one-upsmanship into separate categories I have a feeling that they’re not binary and instead likely exist on a sort of self-esteem spectrum, but that’s just a semi-educated guess based on personal experience.

So we have one-upsmanship derived from poor/fragile/inflated self-esteem. We, as a subculture, also routinely arrange ourselves in groupings that, as mentioned earlier, foster the most intense degree of competition (instances with small numbers of competitors). Lastly, we tend to do one other thing that may help explain why we sometimes act the way we do: we regularly put ourselves in situations rife with competition. Though cooperative board games make up a considerable and arguably growing portion of their respective market and most tabletop RPGs are inherently co-op, the vast majority of both board and video games are competitive in nature. The aggressive feelings that are conjured up in gamers during the course of the game have been shown to dissipate following the game’s conclusion[7], but there is a growing academic consensus that repeated exposure to the sometimes severe spikes in aggression may have consequences for our social skills later down the line. Having our competitive switches flick to 'on' at the drop of a hat after a lifetime spent playing against one another seems like a probable contributor to our sometimes aggressive behavior.

Oh man, I do, like, all of this stuff. Ok, maybe not all of it, but enough that I'm concerned. What do I do about it?

Like many of our other less savory behaviors, a good solid dose of self-reflection is a great place to start. If you think you've engaged in this sort of one-upsmanship, maybe ask yourself why you've done that. If you feel it's become an unwanted habit amongst your circle of friends, perhaps bring them in your thoughts and brainstorm ways to take some of the sting out of these exchanges. One of the most effective things to do with a person who feels they always need to be the smartest/craftiest/best is to provide gentle reminders that they're among friends. A simple, "hey, we're all friends here and we know who to turn to about [subject Z]," can go a long way.

None of this is to say that competition is a bad thing. Far from it. The difference lies in the intent behind the behavior. There's a world of difference between a good, healthy show of skills and compulsive one-upmanship rooted in how we value ourselves. Let's aim for more of the former and exponentially less of the latter.