Posted by Kel
Sorry for the mini-gap in posts this week guys. The GIR and I are enjoying a post-convention respite and are aiming to make the most of the summer before it comes to its unofficial end tomorrow. Ugh, that last clause was so disheartening to write. How is the summer over already? Anyhow, there's plenty in the way of geeky news to distract ourselves with, so let's get down to it.

In news that makes my inner 5-year-old squeal: in celebration of her 30th anniversary, She-Ra will be returning to the world of comics. The Princess of Power will be joining the ranks of the Masters of the Universe this October.
After 75 years of playing the love interest to the Man of Steel, Lois Lane is getting her own moment in the proverbial sun. Next January the intrepid reporter will star in her own young adult novel (which is already available for pre-order on Amazon).

The past two weeks have not been at all accommodating for proponents of equality in video games. Editor of Games.On.Net Tim Colwill composed this excellent breakdown of the events and his edict for readers of the site.

In an effort to combat the ubiquitous misogyny, racism, and bullying that has defined it's player community, Riot is in the process of rolling out an insta-ban system for League of Legends. The feature will premiere on the game's European servers first to allow Riot to discern if the system causes the desired effect.

Team Meat, the 2-person studio behind the infamously difficult semi-eponymous platformer Super Meat Boy has decided that enhancements to their trademark game, namely bringing it to mobile gaming platforms, will be their focus for the short-to-medium term. This is sad news for those of us who'd been waiting for their absurdist mad science cat-breeding sim Mew-Genics. While Team Meat was quick to assure their fans that Mew-Genics has not been cancelled, it'll be a while before we can create ourselves the perfect diabolical feline companion.

Not-entirely-surprising: a career in eSports can pay more than an entry-level finance job.

Add the Tick to the growing roster of prematurely cancelled TV series given new life by digital streaming platforms. Amazon confirmed on Friday that they will be producing and hosting a fresh season of the cult-hit superhero parody and that original lead Patrick Warburton will reprise his starring role.

It was a busy week for Amazon. The online mega-retailer pounced on the game-streaming site Twitch after Google balked at purchasing the service.

While one show gets new life, another is sent off to the great database in the sky. Wil Wheaton and the Syfy Network have both confirmed that the Wil Wheaton Project has been cancelled after a 12-episode run. The Syfy Network has yet to state which show will fill Wheaton's time slot.

A cadre of Star Trek cast members were on hand at last week's Wizard World Chicago Comic Con and they took advantage of their communal attendance with this group picture: 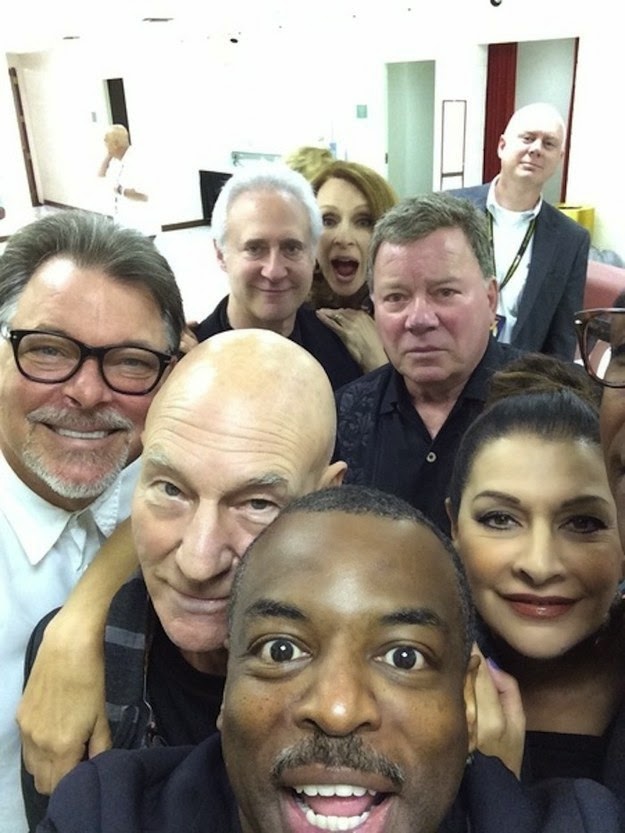 There's no question that the runaway star of this summer's biggest movie is a miniature Ent with a vocabulary only slightly more nuanced than that of Hodor. Groot is beloved, imitated, and replicated as an adorable desk toy, but is it possible for this sentient flora to exist beyond the confines of our communal creative processes? Daniel Chemovitz of the Manna Center for Plant Biosciences aims to find out.

The interwebs have given us countless ways to interact, express ourselves, and even make a living. Check out these internet-based careers that you may not have known existed.

Samsung is desperate to escape the vast reach of the Google ecosystem. Ars Technica details exactly how difficult such an endeavor has become.

It's a question that scientists have grappled with for decades and have met with sometimes contradicting conclusions. Is alcohol consumption actually good for you?

While we're on the subject of ingestible molecules with surprising health benefits, scientists at the UA Steele Children's Research Center believe that you should add curcumin to that roster. Their research indicates that curcumin, one of the components of the cooking spice tumeric, may play an important role in hindering the development of colon cancer.

The latest issue of Nature details the efforts of researchers at the Riken-MIT Center for Neural Circuits have found a way to alter memories in mice, changing previously traumatic or otherwise bad recollections to good, happy ones.

Superradiance is a well-known effect in quantum mechanics, but the forthcoming edition of Nature Communications provides what may be the first demonstrable evidence of the limits of its counterpart, superabsorption.

ALS has its Ice Bucket Challenge. Now Michael J. Fox and Intel introduce these Pebble Watches in an effort to increase awareness of Parkinson's Disease.

The science behind scientific assumptions.

Voyager 2 has provided us with this amazing footage of its flyby of Neptune's largest moon, Triton.

What does the moon smell like? The crew of the Apollo missions has an answer for that.

Dave MacLean of the Center of Geographic Sciences has put together this interactive map that lets users browse through over 650 photographs taken by astronauts on the International Space Station.

It's not quite R2-D2, but it's likely to be the closest we get in the foreseeable future. Meet the robo-caddy.

Did you ever want a jet fighter cockpit in your living room? If you answered 'yes', Lukas Homola has a Kickstarter that is definitely relevant to your interests.

A cafe in Bristol, UK has gone to impressive lengths to attract fans of Dr. Who. The cafe features this replica TARDIS as its restroom.

Behold these incredibly mesmerizing GIFs that each demonstrate a fundamental mathematical concept.

As always, I hope you all have an excellent week ahead and best wishes for a happy con to those presently attending Dragon*Con and PAX Prime!