While some folks may claim pop culture has reached Peak Zombie, I feel it’s difficult to find a better genre to hang an isometric, story-focused survival game on. Dead State is brought to you by the fine folks at DoubleBear Productions. As an early adopter of Dead State through its Kickstarter (which posted some pretty nice numbers: 10,096 backers, $332,635 pledged of a $150,000 goal), I’ve been able to follow along with the game's steady development to the moment of its somewhat surprising full release last week. Maybe I should start over though because, while survival is your goal, Dead State really is more of an RPG than anything else. 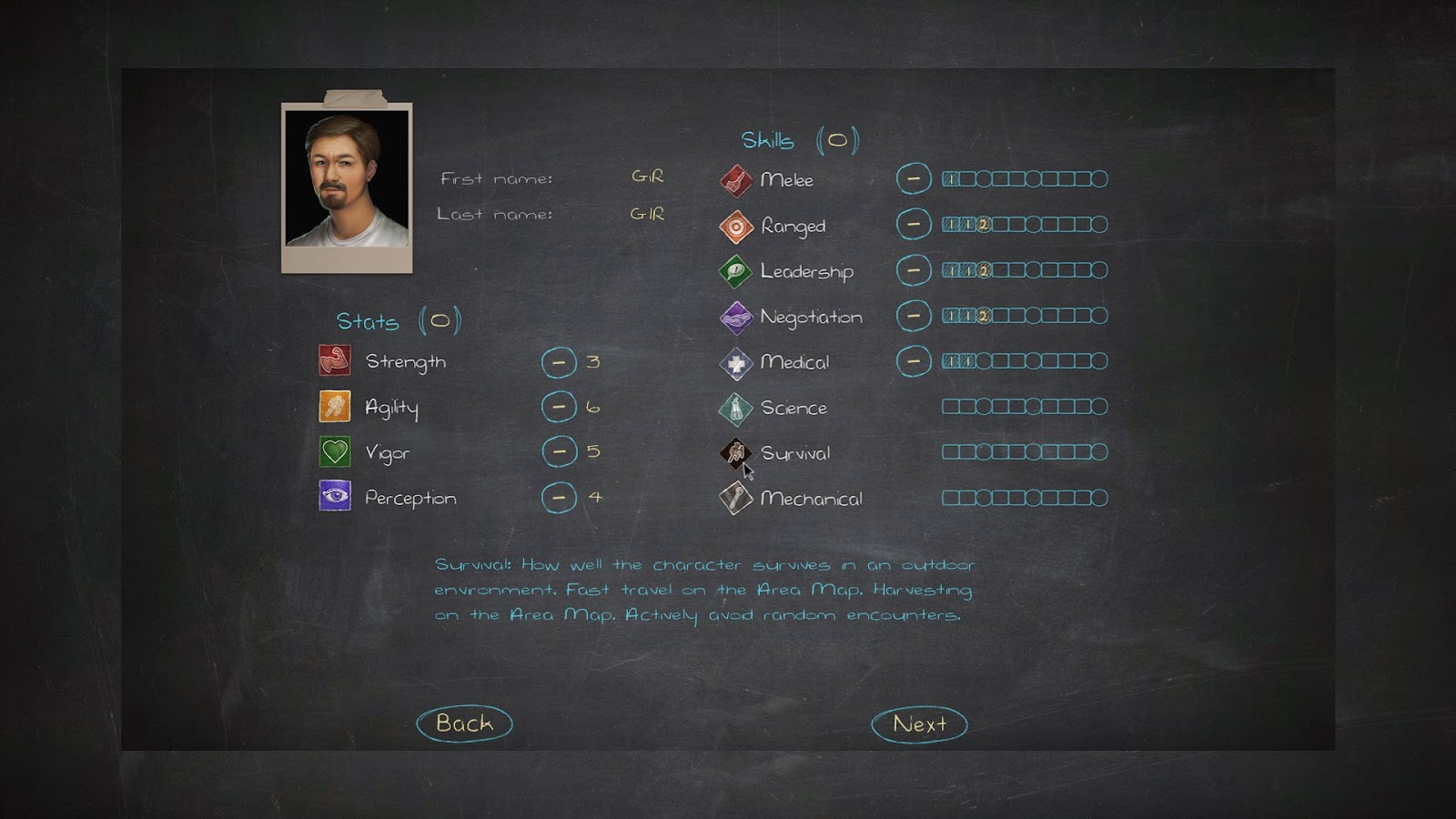 After building your protagonist via a fairly typical character creator screen, the game deposits you in a fortified Texas school after a plane crash. As you begin to explore dialogue trees with various NPCs around this initial shelter, you discover that, low and behold, the Zombie apocalypse has struck. The player’s job is to help manage the other survivors, maintain and upgrade the shelter, and, ultimately, survive. That last point is achieved either by escaping Texas or establishing a community strong enough to endure.

The graphics and audio are not exactly pretty, but that’s honestly not what the game is trying to sell you on. If you want AAA production values with quality voice acting, lens flares, and fancy cut scenes, go check out Far Cry 4. If you want over 10,000 lines of branching dialogue with fully fleshed-out NPCs like Fallout 2, shelter and resource management like classic X-COM (1994), old school turn-based combat on a square grid like Jagged Alliance 2, Dead State might be your new favorite thing. 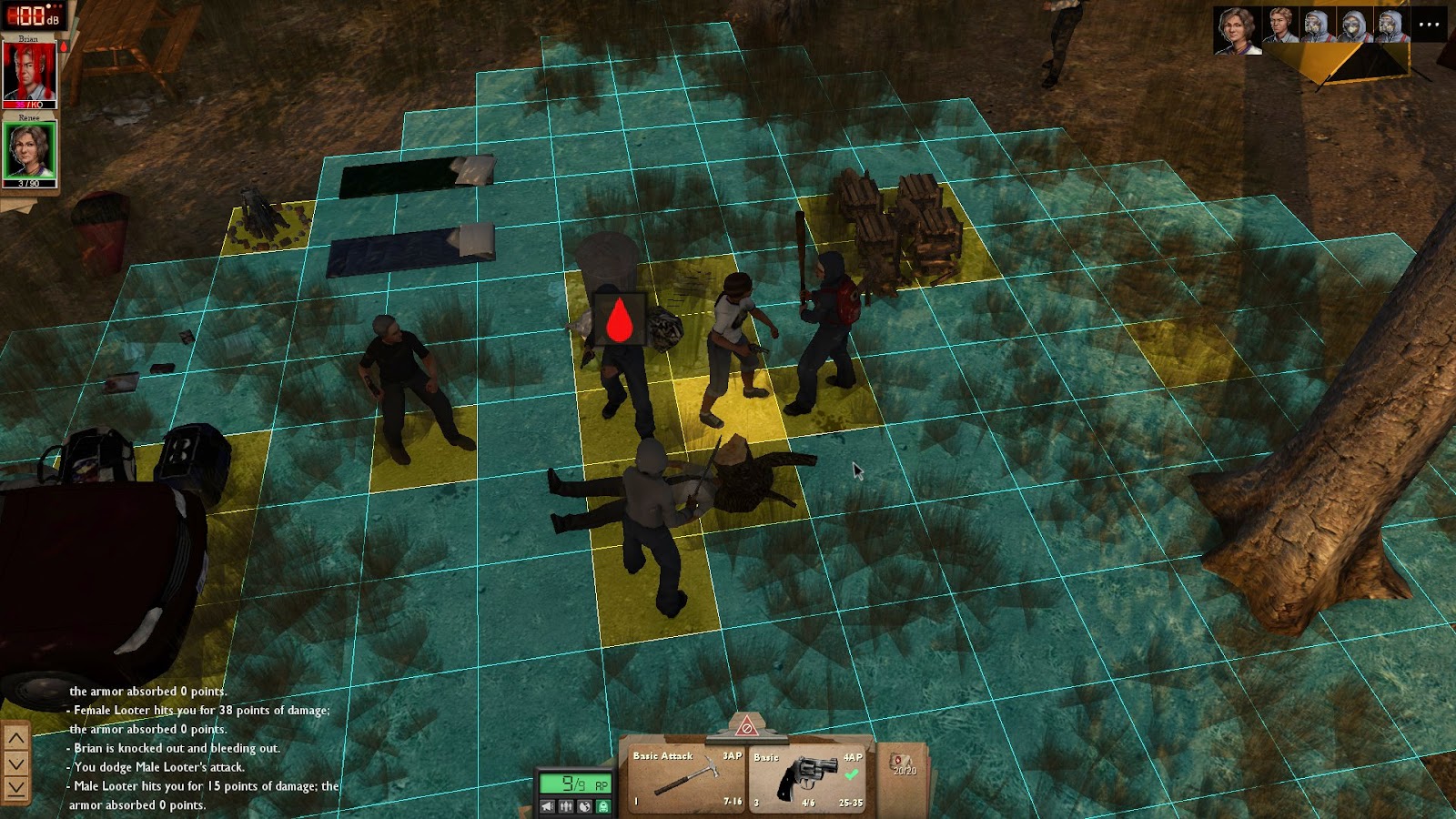 Dead State does a great job easing you into the mechanics that will eventually allow you to thrive or die. Your first mission is a simple supply run to a hardware store to get construction materials to fix the fence around your shelter. While you’re at it, finding some food probably wouldn’t hurt either, as Food is the ticking clock that will doom you all. Every day, no matter what you do, Food is being consumed at a frustratingly rapid rate (frustrating because rationing, while possible, isn't particularly straightforward or simple to implement).

The pressure the Food resource puts on the player is most acute when weighing the benefits of saving lives and adding survivors to the shelter versus leaving them out in the cold. Being no stranger to the genre, I tried to implement a strict policy that anyone we let into the shelter had to fill a role or otherwise provide some sort of expertise to be worth the drain on our already meager reserves. This had some unexpected consequences when I found an ex U.S. Marine but who refused to return to the shelter unless we also admitted a 13-year-old asthmatic with no survival skills to speak of and a confused elderly woman who didn’t speak English. If I hadn’t just lost a key member of my team on a recent supply run I probably would have said 'forget it'. In the end I relented and all three come back with us, but boy did I regret it. Current residents of the shelter flipped out upon learning that I hadn’t consulted them before bringing home three more hungry mouths to feed and no fuel for our generator. Let me be clear about the legitimacy of their concern: death is for real in Dead State. There are no revives, medicine is extremely difficult to come by, and building an actual infirmary takes a staggering amount of resources when you could be building a well for fresh water or a greenhouse for a renewable safe food source with those same materials. 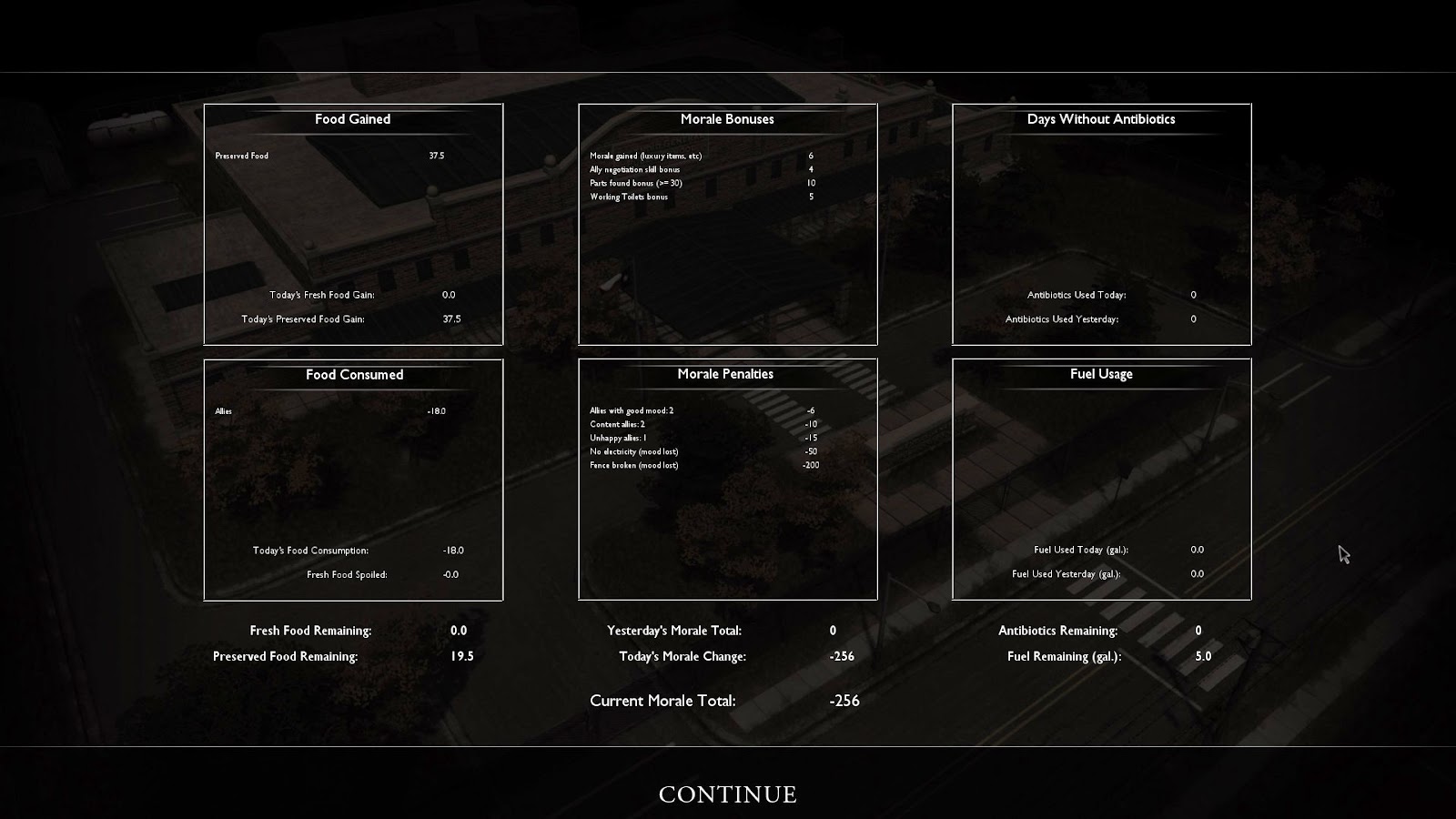 Forgive me; I am both getting side-tracked and ahead of myself. Aside from interacting and talking to NPCs with the main character, everything in Dead State centers around a white board where you assign fellow survivors Jobs. These jobs can consist of everything from “Repair Shelter Fence” to “Scavenging Party” to “Cheer People Up.” Tasks like building shelter upgrades or repairing fences will tell you how many hours it’ll take to finish with this number being adjusted based on the number of people you assign to it and the skills of those involved. Some Jobs have limits on how many people can be assigned to it, while others do not. Some Jobs have skill level requirements, while others do not.  Dead State does a good job of letting you approach things how you want. Would I rather put a skilled mechanic to work building a watch tower for 4 hours, or assign two unskilled workers to the tower and have the mechanic fix a truck I found so I can range further out for supplies? Or even assign only 1 unskilled worker to the tower and have it take twice as long? You can certainly get bogged down in optimization, but I found that, in most cases, taking the time to get the most out of my survivors was well worth it in the long run. 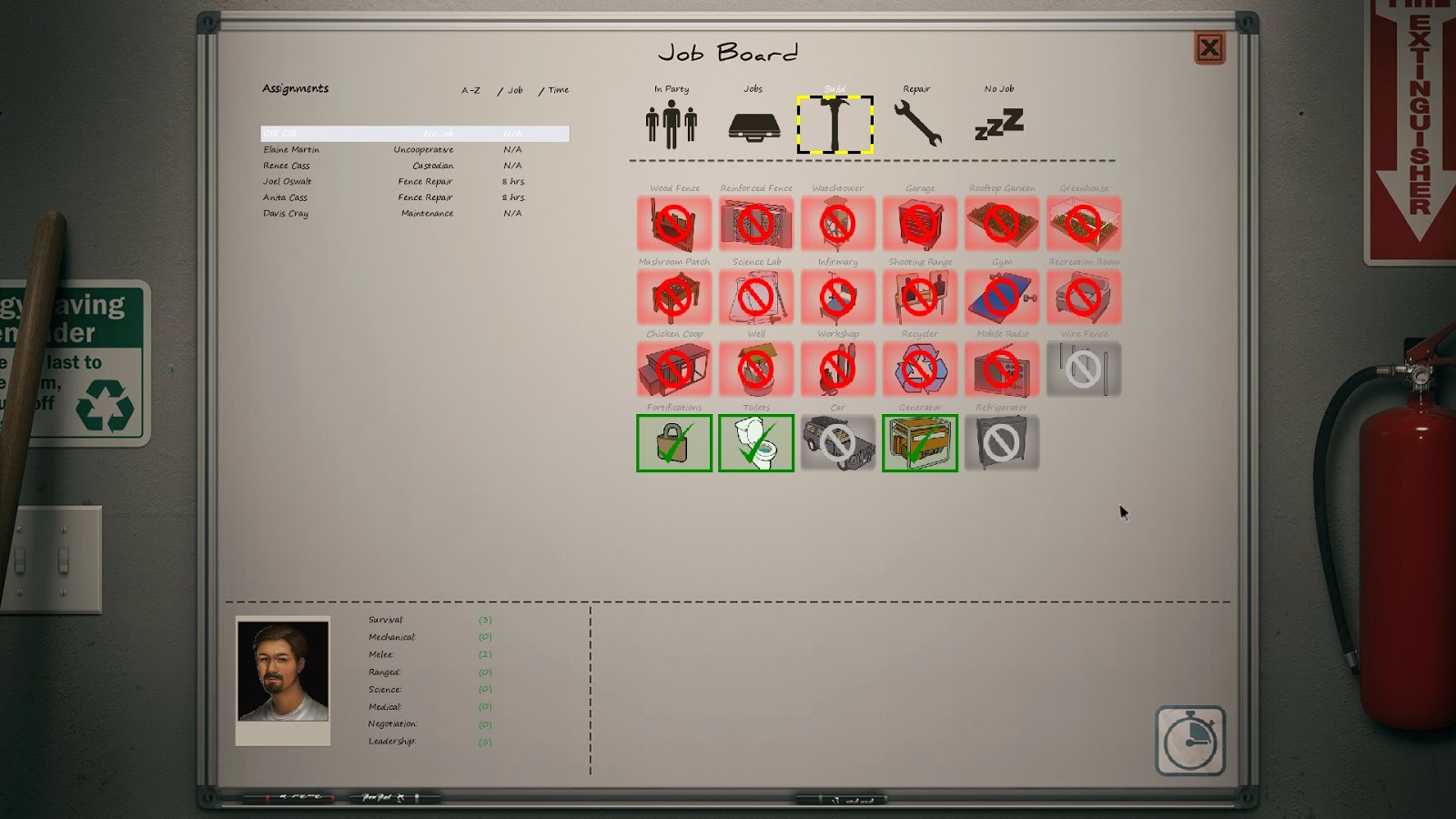 The most flexible, and arguably the most vital job on the board, is “Scavenging Party. You may assign up to four survivors to form a team which you can then send out to explore on the World Map (this covers a large part of Texas). When you travel around you start on foot but, as you continue to range, you will eventually get, and need, horses and cars. The complications there being that horses require precious food and cars use fuel you might otherwise want for a generator to provide power for various shelter upgrades. Traveling on the World Map uses up the one resource you can never replenish: time, which is tracked by a digital watch display. Let’s just say not being able to get back to the shelter by nightfall is bad and leave it at that. I don’t want to say spending the night in the open isn’t survivable just because I haven’t been able to accomplish it yet, but honestly I’m not sure how. The few times I tried it, even at the later stages of the game, I was swarmed to death by the Dead. As you travel the map there are random encounters with an assortment of bandits, other survivors, zombies, and wildlife that will feel familiar to those veterans of this genre. These encounters, similar to when you reach actual marked locations to explore, bring you back into the isometric grid map. Movement will be real-time until you actually alert someone to your presence or deliberately click to start combat, at which point the game become an Action Point, turn-based affair. 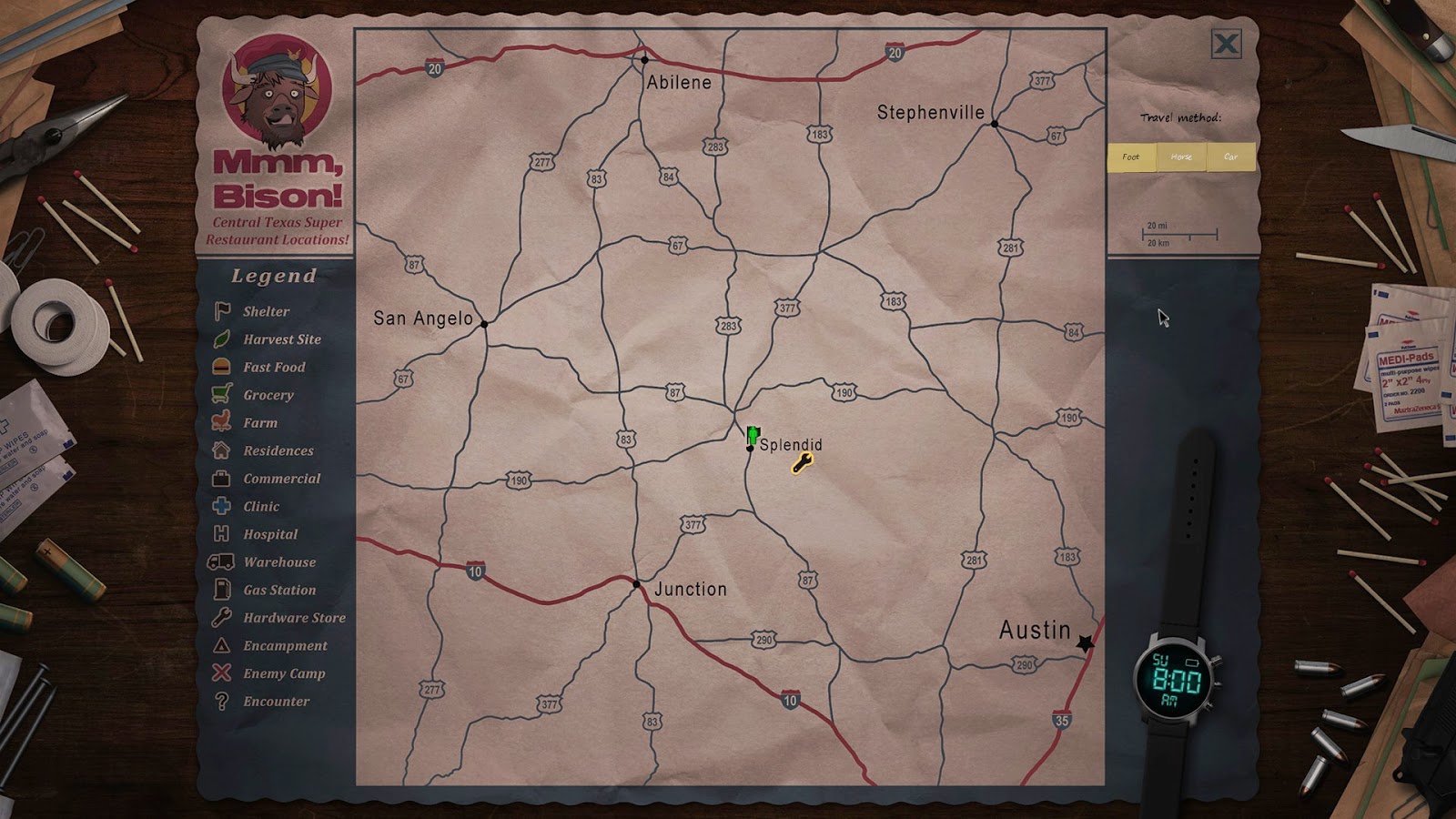 You might notice I said alert a moment ago, which leads to what I felt was a fairly interesting mechanic not too many games can pull off well. In Dead State “Noise” is just one more resource you’ll need to keep an eye on. Whether it’s using a sledgehammer to break down a door, or unloading a shotgun into a zombie’s face, your party members generate noise. The higher the decibel level the more likely you’ll not only alert enemies on the map, but also lure in more zombies from the surrounding areas (which will start to trickle in spawning at the edges of the map zone you happen to be in). If you aren’t careful that trickle can become a flood. Ammo is NOT universal and can end up being pretty scarce for certain weapons. These two elements, along with inventory weight management, nicely encourage players to actually ponder the benefits of melee versus ranged weaponry beyond  your standard picking whichever has the highest damage rating. 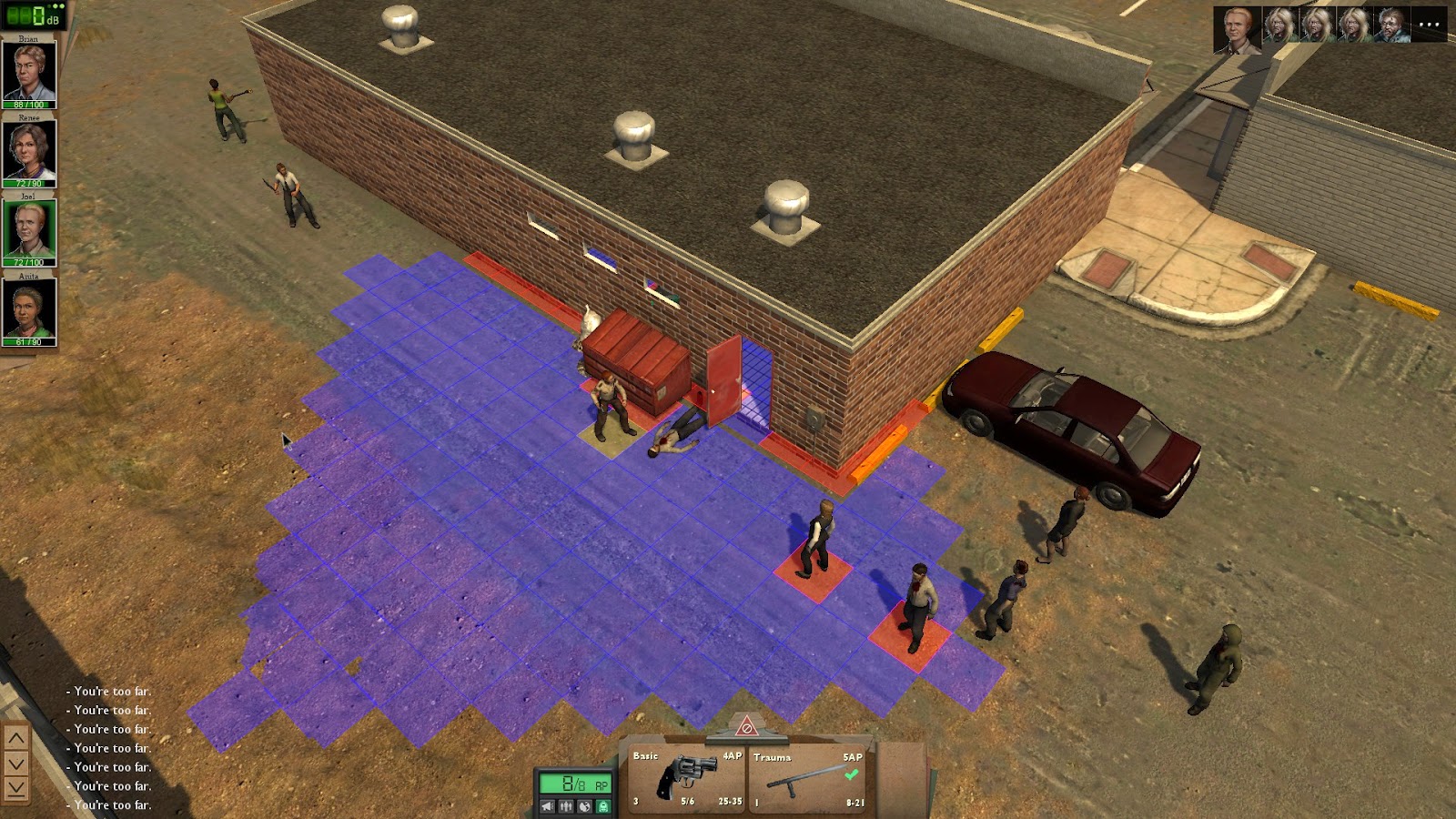 Sadly, the living enemies who you’ll encounter may not share your caution and it can be irritating how reckless the enemy AI can be in terms of wasting ammo and their lives. Conversely, I tended to debate the value of the bullets in my gun and peaceful resolution versus the can of food the bandit wants. More often than not, living AI enemies will just charge my entire party, firing madly at me and alerting every zombie in the county to our presence. I mean, why should they care if they run out of ammo or die? They are just a random encounter after all; it’s not like they have any concerns beyond the screen they spawn on. I think I find it especially frustrating because the world is otherwise very well crafted. There ARE bandits who are scripted to talk to you and not just commit suicide by charging you with an empty gun. The issue is the inconsistency in the application of logic and lack of identifying information to tell the player which bandits they can actually speak with, as opposed to those who just want to watch the world burn.

While I’ve certainly been enjoying my time with Dead State so far, I do feel the need to issue a complaint, though it is a complaint that is certainly not unique to this particular game. Way back at the beginning of this review I noted I was surprised that DoubleBear announced the game was fully released and no longer Early Access. This is because, after playing several iterations of the game: Alpha, Demo, Beta, and Early Access, I honestly can’t tell what qualified the current build for “Full Release.” Many bugs and inconsistencies that I went along with in Early Access are still present.

Now let me be clear; DoubleBear ran an excellent Kickstarter campaign: delivering on every feature they promised, providing monthly updates on progress and constant patches. They have done far better than most Kickstarted games in the press recently, and I do consider the game feature complete. It's just not exactly working as intended in all areas. My hope is, based on the level of communication and dedication DoubleBear displayed through their Kickstarter, they will eventually squash the remaining issues. But it makes me wonder: why not leave it in Early Access to give the polish it deserved and needed? This isn’t AAA; there are no arbitrary deadlines set by demanding overlords and, from where I sit, it seems the hasty removal of the Early Access label hurt Dead State's release more than it helped. I know lots of games have Day 1 patches, even major titles like Dragon Age Inquisition. DoubleBear certainly is not working with the same level of resources as EA and Bioware, but how did this become an industry standard even for Indies?
Before I go back to boarding up the windows and stockpiling canned goods along with other non-perishables, I want to stress that I DO recommend picking up Dead State. Don’t let my remarks in the paragraph above drive you off from what I feel is a worthwhile game. While most zombie games are about action or horror, ultimately Dead State is a narrative-heavy game that is as much about how pockets of humanity can cope with disasters on a scale they can’t possibly control as it is about killing zombies and making experience bars go up. Dead State is currently available on Steam for $29.99 USD I encourage you brave survivors to go check it out. Good luck, and don't get bitten.