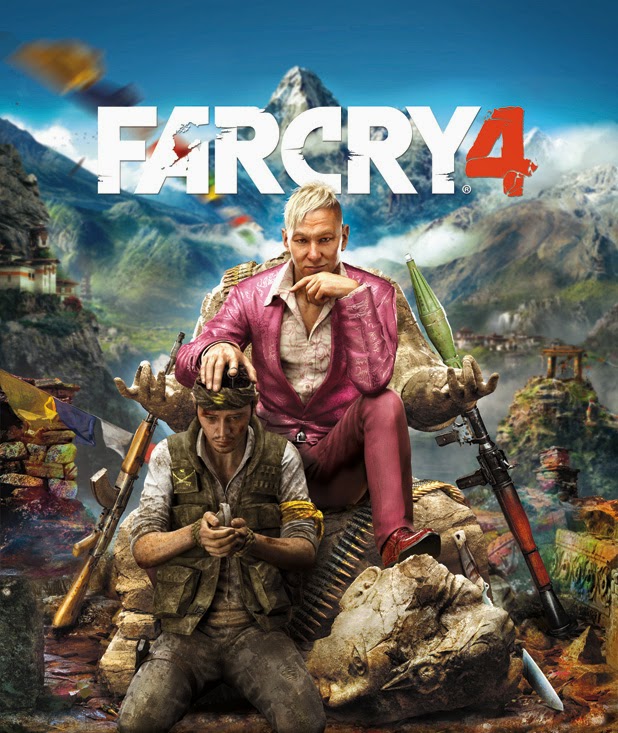 I know it's been a while since the last review and for that I apologize. Between work and the holiday season kicking into full gear I haven't had much time to play games, let alone write about them. But I have returned to bring you my thoughts on Far Cry 4, aka Ubisoft's attempt to make you forget the abomination of a release that was Assassin's Creed: Unity. 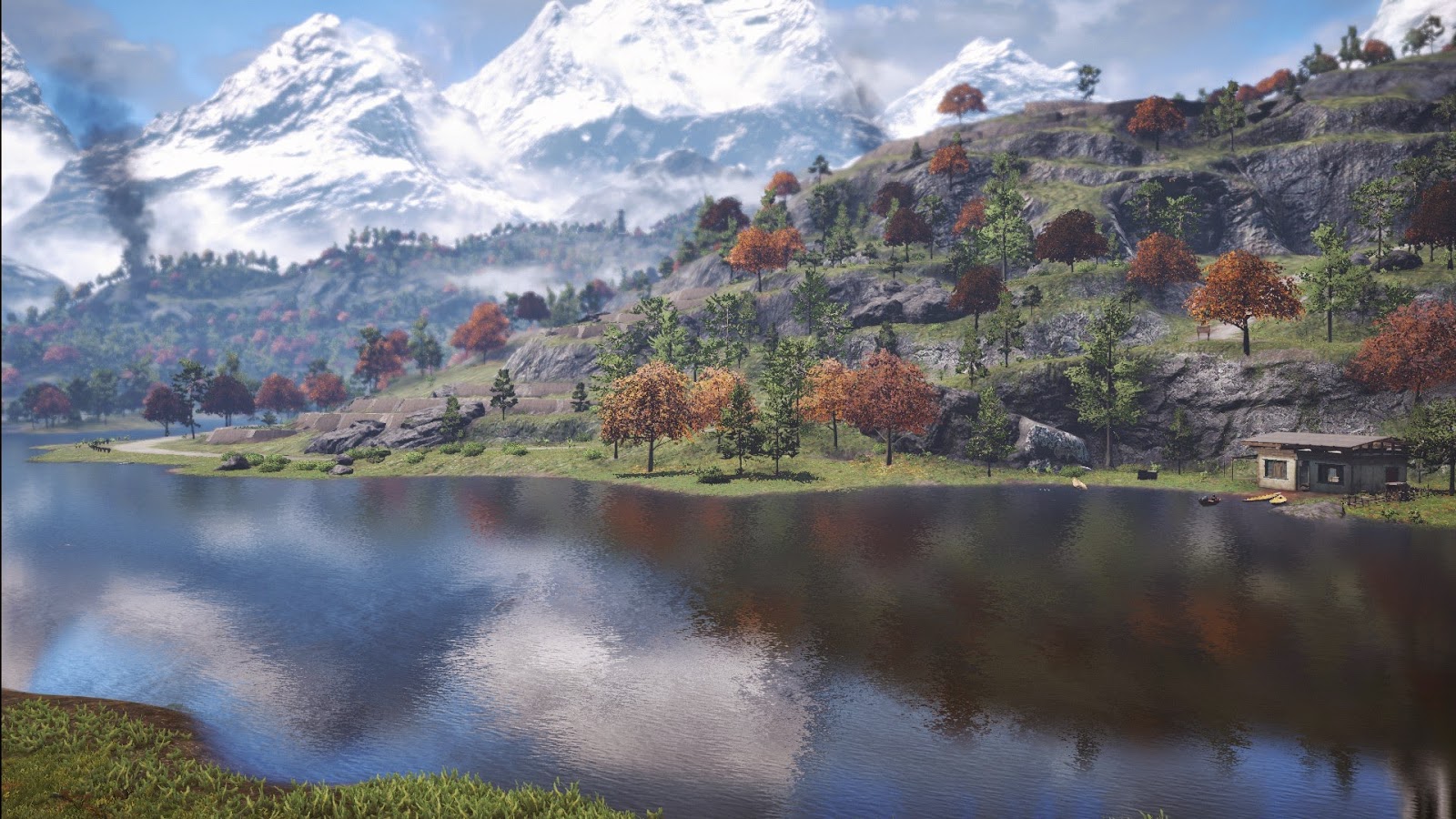 Greetings from Kyrat readers! Wish you were here - but also not. That may sound confusing but hopefully I can clear things up in short order. Let me start by saying Far Cry 4 is essentially Far Cry 3 but refined to cut out what didn’t work, and expand upon what did. Nestled in the Himalayas, the nation of Kyrat covers a truly impressive area and is loaded down with everything you’d expect from the Far Cry franchise: radio/bell towers to climb, animals to hunt and be hunted by, outposts and fortresses to clear, natives to help, and collectibles to gather up.
One of the first and most obvious improvements have been to the plot and protagonist. Where many players felt a jarring disconnect from Far Cry 3’s Jason BROdy (a.k.a. Xtream to the MAXX White Boy adventurer whose main goal was to party as much as possible), Far Cry 4 makes it much easier to slip into Ajay Ghale’s shoes. Ajay fled Kyrat’s civil war as a child with his mother. His father was the founder of the rebel movement Golden Path and who struggles against the land’s self-proclaimed dictator, Pagan Min. Ajay has returned to Kyrat to scatter the ashes of his mother in the homeland which she loved and he’s presently estranged from. Unlike Jason on Rook Island, Ajay has an authentic and more natural reason to be in Kyrat. This connection makes your mission and goals feel that much more plausible and, thus, generally more engaging. Also setting Far Cry 4 apart from its predecessor are the behaviors of the native inhabitants both among themselves as well as how they treat Ajay. It’s  refreshing to see that Ajay is self-aware enough to recognize his outsider status, yet retains a genuine desire to help. Rather than put forth an arrogant attitude of, “I’m here to fix the mess you ignorant savages have made of your country,” Ajay seems to take a more humble approach, consulting with one of two Golden Path leaders and offering to carry out their orders. This leads to one of Far Cry 4’s fun new mechanics where, depending on who you support, the leadership and mission structure of The Golden Path changes. 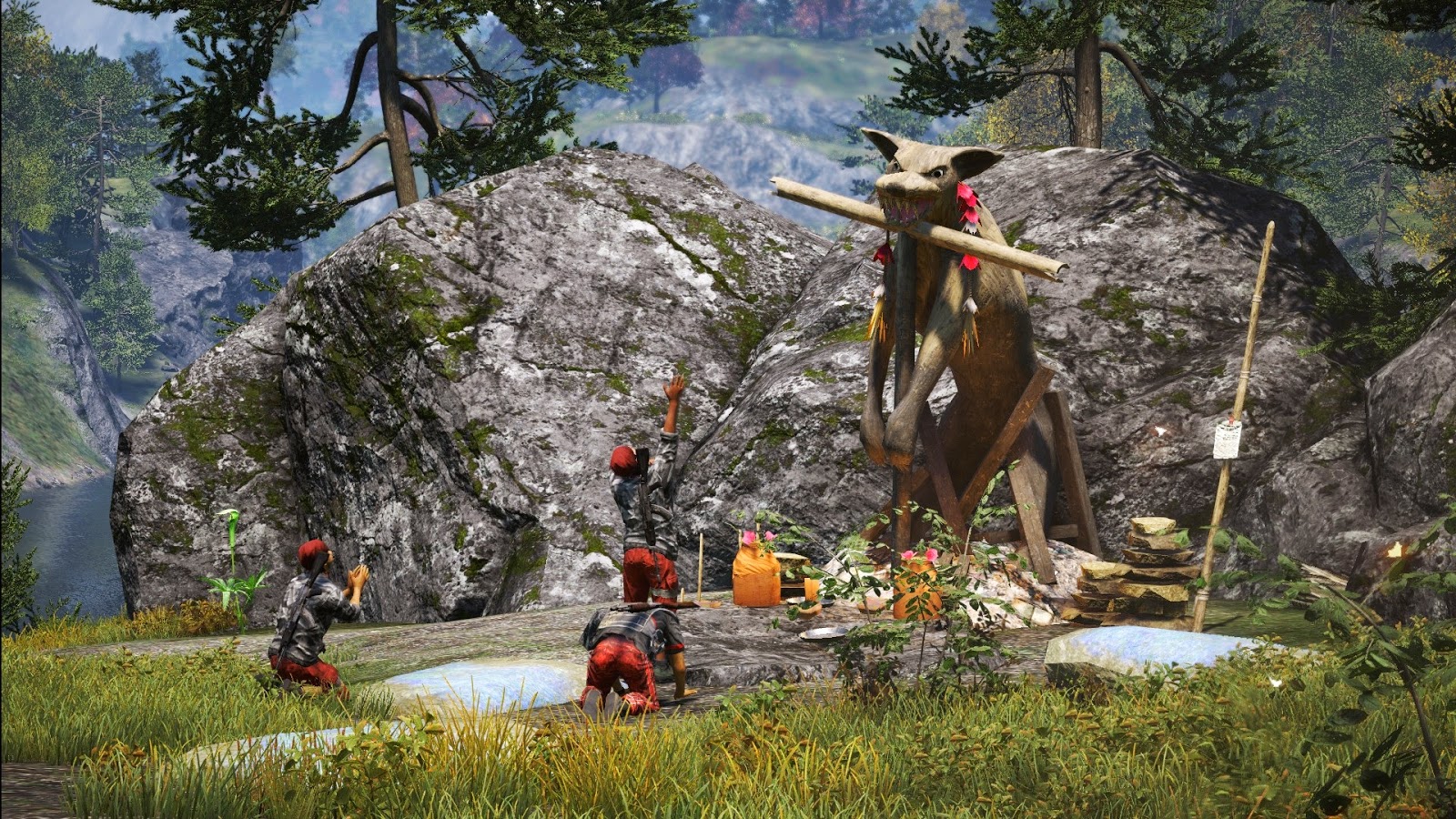 But it wouldn’t be a Far Cry if the game took itself too seriously, and there certainly are more than enough opportunities to experience wackier and over-the-top cinematic exploits in Kyrat, which can be found the further you stray from the main story quests and which, frankly, I’d rather not spoil here. Let’s just say it would not be unreasonable to assume at some point one might: drive an ATV off a cliff to jump into an airborne plane, ride a rampaging elephant into battle like Tony Jaa armed with a grenade launcher, or get into a fist fight with an eagle while dangling precariously from a grappling hook line attached to a gyrocopter held together mostly by duct tape and prayers. Oh yeah, did I not mention the gyrocopters? They're just one of dozens of new vehicles Far Cry 4 offers up to players along with airboats, Tuk Tuks, the usual assortment of cars, jeeps, trucks, and elephants. The only way Far Cry 4 could have been better in this aspect would have been by letting players ride tigers too, though this may be a personal preference.
That said, beware. The wildlife is so deadly and filled with such hatred for all mankind I would almost claim they are more dangerous than Pagan Min’s army. I know some reviews have claimed the combat difficulty and enemy AI has been kicked up a notch as compared to FC3, but personally I think I’ve died at least twice as often to eagles, rhinos, tigers, crocodiles, bears and honey badgers (yes you read that correctly), than I have to anyone with a gun.
Between great game play, gorgeous graphics, wonderfully immersive sound, and animation diversity all bundled around familiar mechanics it's easy to say, "Wish You Were Here!," but now we get to the why you may not want to visit.

Far Cry 4 has changed up how it handles co-op play considerably. Instead of a stand alone mini campaign with linear mission structure, you have to advance the Single Player game far enough along in the story to invite a friend to simply drop into your world. Only the host gets credit for completing open world quests and events. Loot, XP and Karma are shared but that's about it for communal spoils. This wouldn't be such a big issue for me if the actual process was more reliable. Aside form Ubisoft's terrible Uplay interface not always functioning as it should, even once we were tearing outposts up together we would run into hilarious but ultimately game-breaking bugs like invisible vehicles, forced player teleportation, rubber-banding into lethal situations (particularly with the knife animations; silent takedowns & skinning), and missing player heads. While I know the forced teleportation isn't a strictly bug, it may as well be. For example, at one point my partner took off in a gyrocopter leaving me behind (I had missed my chance to grapple aboard) and I soon got a prompt that I would be teleported if we didn't bring our PCs closer together. I had just finished reading this when I was warped to my partner alright, directly UNDER the copter. As for  the knifing examples I mentioned, in the first I was skinning a fish and the animation dragged me out of the lake, but not up on shore. The effect was such I was swimming through the rocky mountains of Kyrat until I 'swam' too deep and feel through the bottom of the map and died. In the second, I performed a silent take down on a guard only to fling him bodily to the Moon when the animation finished up. Ultimately it depends on your tolerance for that sort of thing. While its fun to laugh at the first few instances, it can quickly become tiresome when it prevents actual progress from occurring. It just seems like the co-op was never fully tested, that Ubisoft bolted the feature on to say that the game had it and hoped that the amusing nature of some of the glitches would be enough to keep the angry gamers at bay.
There's also a competitive multiplayer called Battles of Kyrat. It's an asymmetric mode where a team of Golden Path soldiers are pitted against bow-toting Rakshasa warriors who are able to summon beasts and turn invisible. I didn't play much of it and wasn't terribly impressed with the standard map types and objectives.

Bottom line: I strongly recommend picking up Far Cry 4 if you've been considering it and holding out. My co-op qualms aside, it's one of the few AAA titles of the year I would say that is well worth it's current price tag of $60 USD. The single player alone is well worth it and, as long as you can tolerate some bumps in the road for Co-Op, you'll certainly find the game more chaotic and potentially hilarious with a partner.