Posted by Kel
We've got a special guest post on our hands. After years of helping behind the scenes at the Care and Feeding of Nerds, the GIR is stepping out from the shadows and putting his thoughts to paper...er...html. In the following he tackles the Early Access incarnation of one of the most sought after demos of PAX East 2014: Invisible Inc. The game has already come a long way since its appearance at the BCEC, but is the Early Access worthwhile? Lets find out. 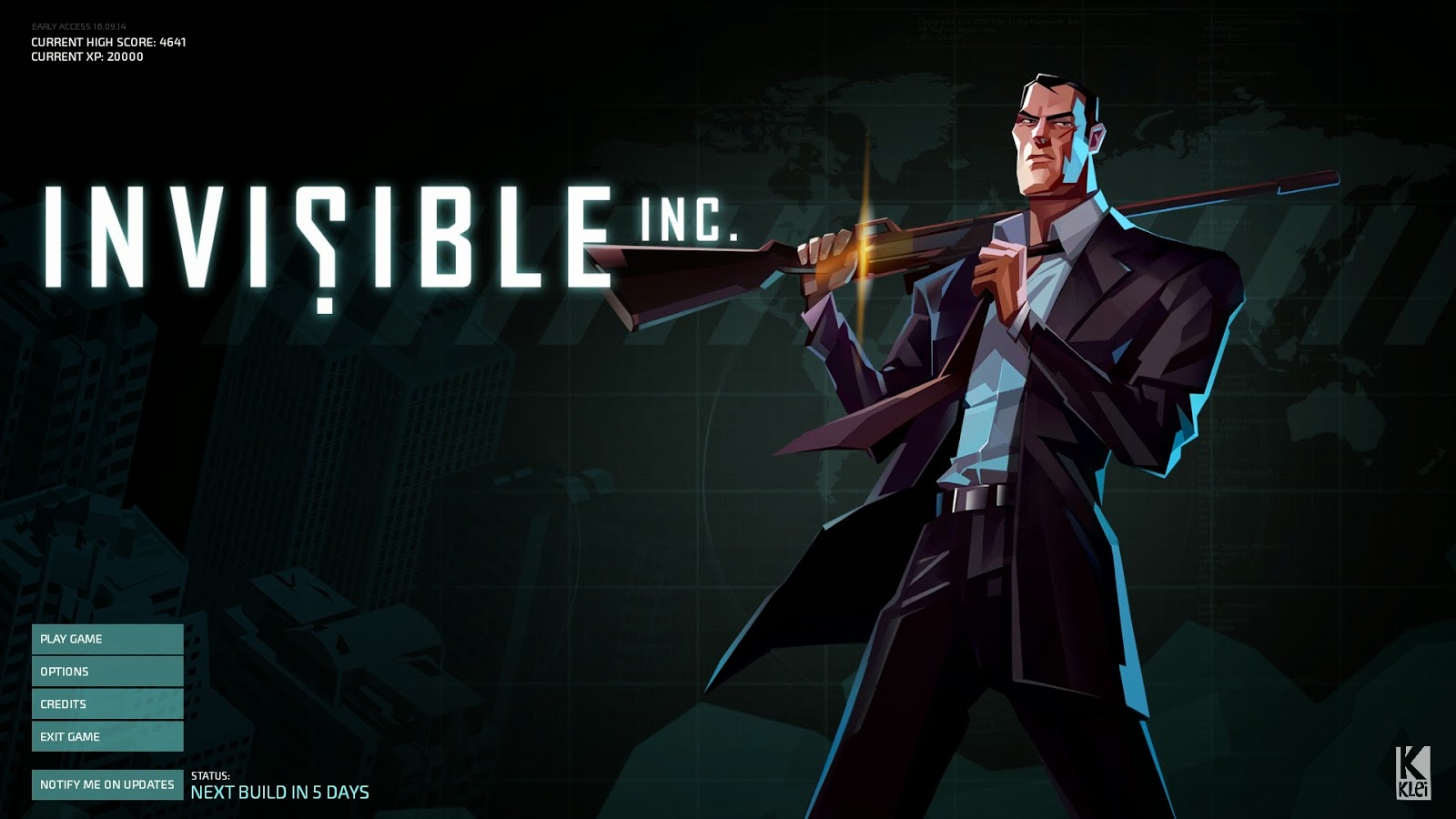 Invisible Inc., the latest offering from Klei Entertainment, may still be in Early Access but that doesn’t mean you should overlook it.  While the label of Early Access is applied more and more liberally every day, Klei has done it right with a substantial chunk of playable content right off the bat and reasonably frequent updates.  Personally, it was an easy decision to buy in and check it out as they are still operating off the good will garnered from previous excellent titles like Mark of the Ninja and I was pleased with what I found despite some obvious quirks which I chalk up to the Early Access aspect.

Essentially a turn-based tactical espionage game, you are given control over a team of Operatives, each with their own specialties (Sneaking/Hacking/Etc.). Your goal is to Infiltrate, Hack, and Steal your way through the infrastructure of various corporations in order to gather enough resources to complete a penultimate mission given to you by the game’s narrator, the mysterious Central. Each safe or guard you successfully burgle yields secret files that can be used to level/power up your Operatives, granting them new abilities or enhancing existing ones.

To best, if not the simplest, way to describe Invisible Inc. is that it seems like Klei made a smoothie out several other games:

It's a combination that might make you raise an eyebrow at first but I have to say it tastes delicious.
At first there isn’t much roster variety with only 2 Agents at your disposal, but as you take on various missions via the World Map, you’ll be given opportunities to rescue more. Your new charges then become available for future operations, or at least until your run ends but we’ll come back to this point in a bit. 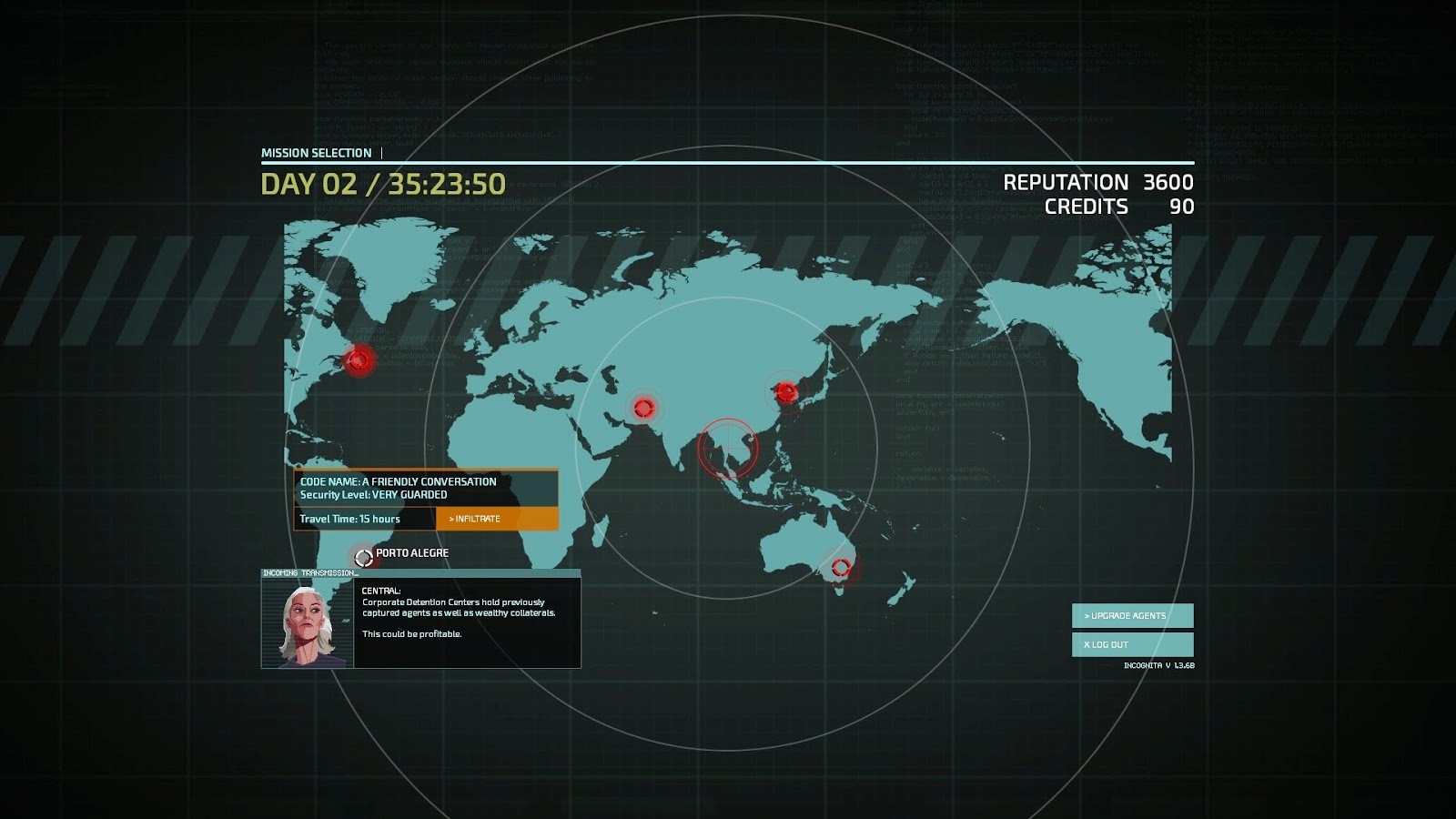 Here is where we see the first flavors of X-COM.  On the global map, several locations of interest will pop up each indicating the following: The Corporation you are targeting, The Mission type you are undertaking, and the Degree of difficulty.   It’s important to review all your options because, as you’ll see the deeper we dive into this game, the fundamental mechanic at work here is every decision will have consequences, be they intended or not.  Target too many vaults to grab cash for upgrades and you might find yourself forced to use only 2 Operatives the whole time. Conversely, target too many Detention Facilities to free additional Operatives and find yourself perpetually broke with no money to make them powerful enough to survive.  There are even some apparently rare special missions that afforded an opportunity to steal prototype technology which provided unique and powerful benefits not only to your Operatives but the Incognita System itself.
The what system?  Right, so after selecting a mission your agents will be dumped into a procedurally generated series of rooms full of guards, safes, and computer terminals which represent the complex you’ve chosen to infiltrate.  Using an action-point-based system with a standard square grid you set about trying to complete your objectives without being caught and killed.
The Incognita System, which had once been the title of the game, is the tool that allows you to hack the various security cameras, turrets, and safes you come across.  Doing this though requires a resource PWR(power...I see what you did there) which is obtained via hacking Terminals.  Once again we see the fundamental mechanic of Risk/Reward at work. Do I hack the camera to help track a guards movement, disable to turret to run down a hall or open a safe to get cash for upgrades?  So many choices, so little PWR, so little time. That’s the other thing constantly working against you in Invisible Inc. Once you've embarked on a mission a gauge in the upper right corner of the screen that represents the Security Forces’ awareness starts ticking up.  The longer you stay the more security cameras activate, and more guards flood the building to hunt you down.  It’s up to you how long you want to stay before you make a mad dash for the elevator that allows you to escape.  I myself was forced to cut my losses on more than one occasion and chose to fail a mission rather than throwing an Operative to the wolves, but be warned an Operative left behind stays behind! Unlike X-COM, there is no way to “recruit” new Operatives and, while you can revive someone during a mission with special items, once that specific mission ends, unless you got them to the elevator alive, they are gone from your roster until your next play through. 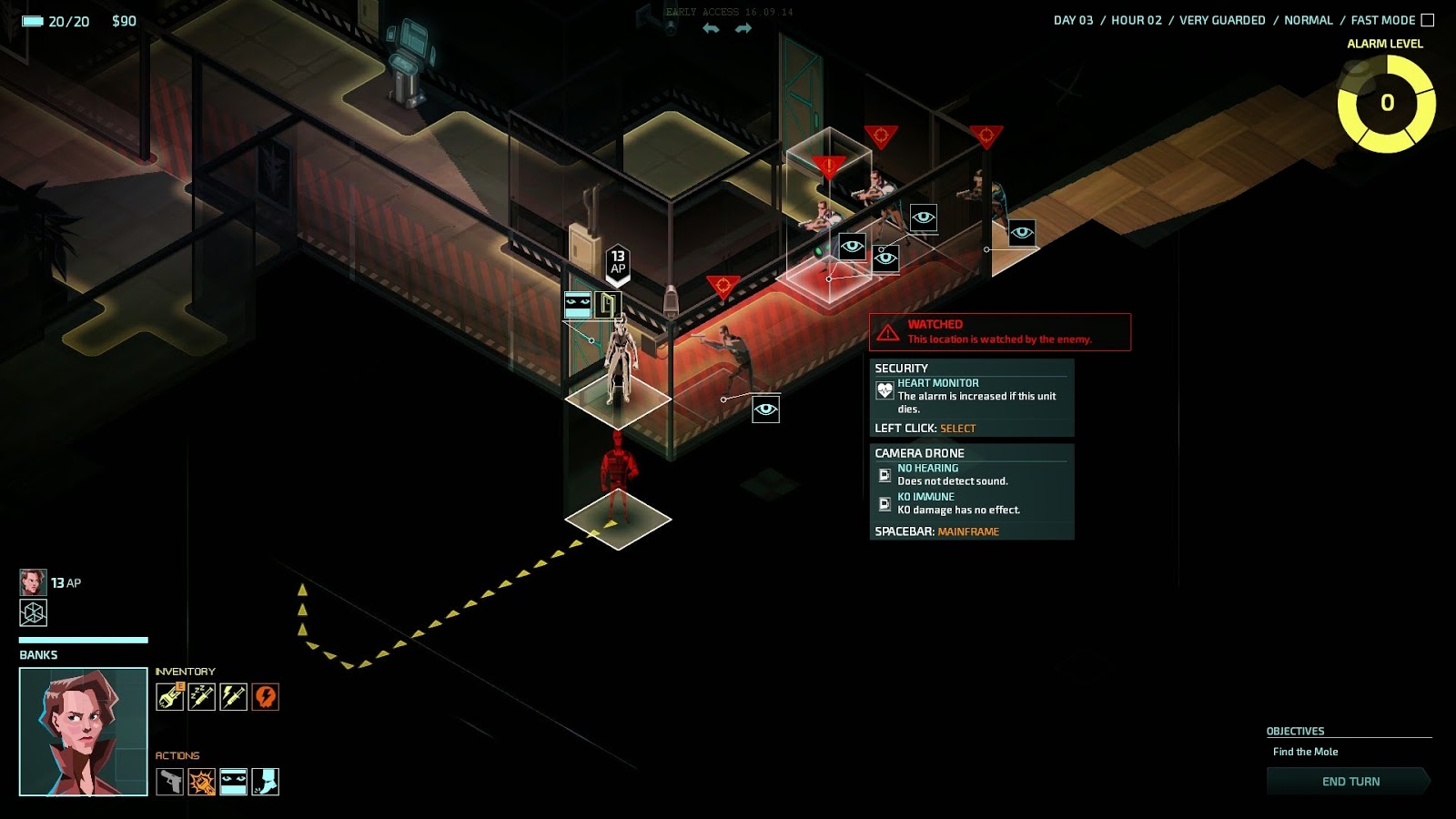 While this is primarily a stealth game in terms of you needing to hide behind cover objects to break line of sight, there ARE ways to combat the guards in the form of tasers, and one un-lockable operative even comes with a sniper rifle(with a clip size of 2).  The tasers don’t raise the alarm but only knock guards out for a limited number of turns, the rifle can kill but this often causes a rapid escalation in difficulty in terms of what the Security forces begin to deploy to stop you. The overwhelming force Security can bring to bear and the perma-death features ensure you will likely fail at some point and end up with a TPK.  But all is not lost!  As noted earlier in the review the game is meant to be Rogue-like or rogue-lite even in that you gain long term experience which unlocks new starting gear permanently in the form of Incognita functions or new Operatives.  You still only start with 2 but you can at least begin with say, the Sniper and the Safe Cracker as opposed to Generic Stealth and hacker. It's similar to how you would unlock different ship hulls in FTL. 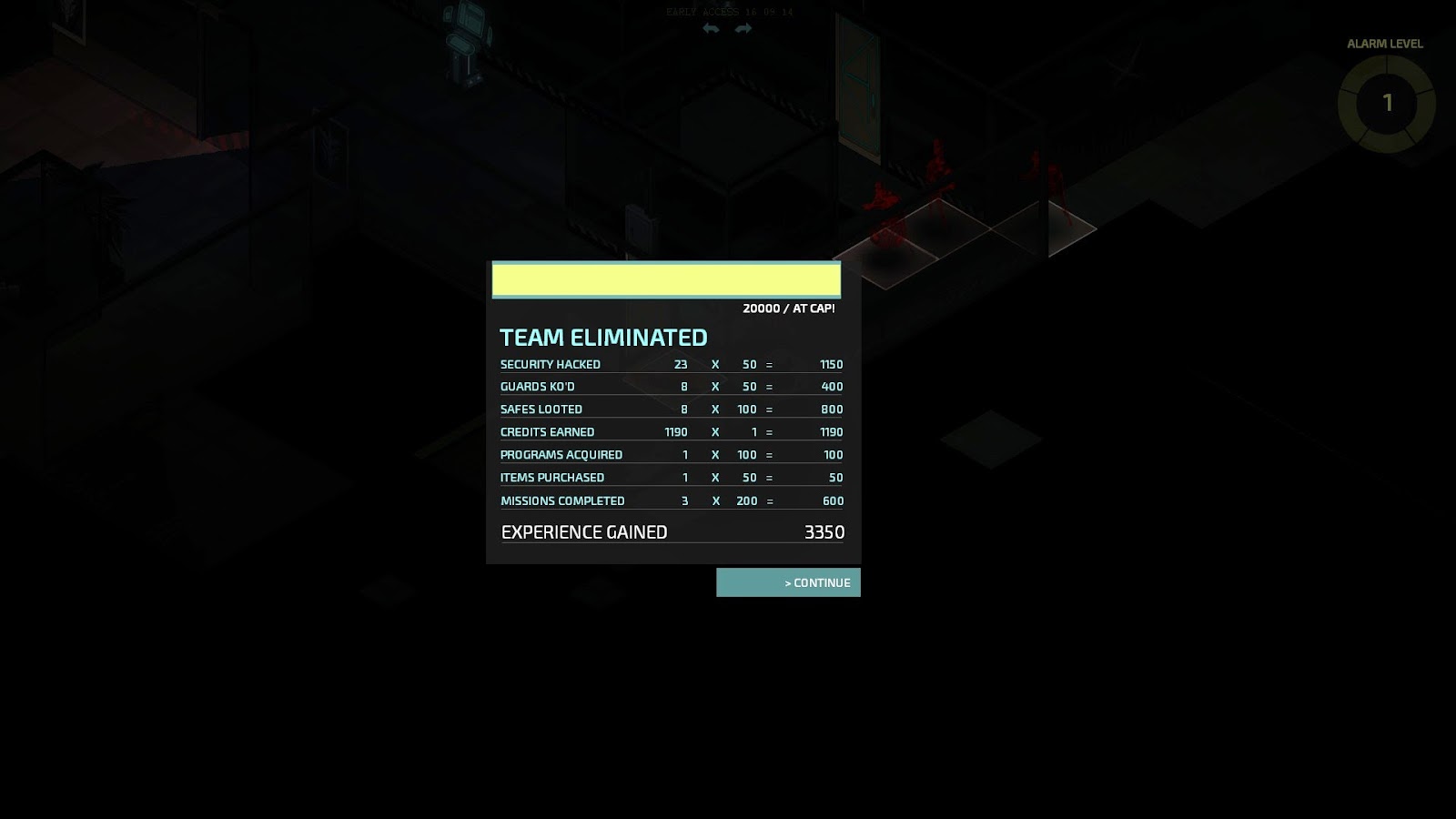 So in theory you should do a little better each run though you’re still primarily at the mercy of the procedurally generated layout.  If I’m honest I did find it frustrating that the very first mission labeled “Lightly Guarded” could be twice as difficult as an end game mission labeled “Very Secure” simply due to the layout offered up by the procedural generation, but hey if you've ever played ANY game with that as a feature you should know what you’re getting.
Bottom Line, TL/DR: Considering Klei's history of high quality AA titles I feel confident recommending this as a solid purchase. Per the Klei FAQ via the Steam Store Page the core set of content will be done in early 2015 at which point the current of $15.99 will increase to $19.99.