Posted by Kel
It seems that writing for the blog just might suit the GIR, because he’s back with another game review for us. Woot for his second entry and also for what seems to end of this year’s new video game drought! (Also, for more PC gaming goodness, please feel free to join our Steam Group)
The remake of the classic arcade game Gauntlet has finally arrived courtesy of Arrowhead Games Studios, the same folks behind the much beloved Magicka.  While I myself never played much of the original Gauntlet, despite its appearance in so many arcades, I did log plenty of hours on the N64 version: Gauntlet Legends.  For the uninitiated, the Gauntlet series follows a fairly simple formula typical of the hack'n'slash and beat'em-up genres. 1-4 Players chose from the classes available, in this edition the Warrior, Elf, Valkyrie, Wizard, and battle hordes of monsters while collecting loot inside a dungeon.

Each of these heroes has a fairly distinct play style with a unique move set and control scheme.  Let’s look at them individually.
The Warrior -  He uses an axe that has a basic slash, a Bullrush to knock down groups of enemies (which can eventually be upgraded into a leap attack), a whirlwind cleave that grants limited invulnerability during execution, and a high damage but irritatingly precise overhead chop.

The Elf - Has a rapid fire auto-attack that does low damage, an escape roll to weave through waves of onrushing attackers, a charged up high-damage skill shot, and a bomb he can plant for some AOE/crowd control.

The Valkyrie - I've spent the majority of my playtime with this champion. She has a basic sword attack, a penetrating spear thrust which not only carries her through enemies but often drops them with a single hit(on normal in any case), and, best of all, a shield which blocks any projectile or normal attack. Eventually this last ability upgrades to not only block but reflect incoming projectiles and finally morphs into a Captain America-style shield throw(which can be wildly unpredictable when it ricochets). Throwing the shield disables the blocking function until it returns to you. 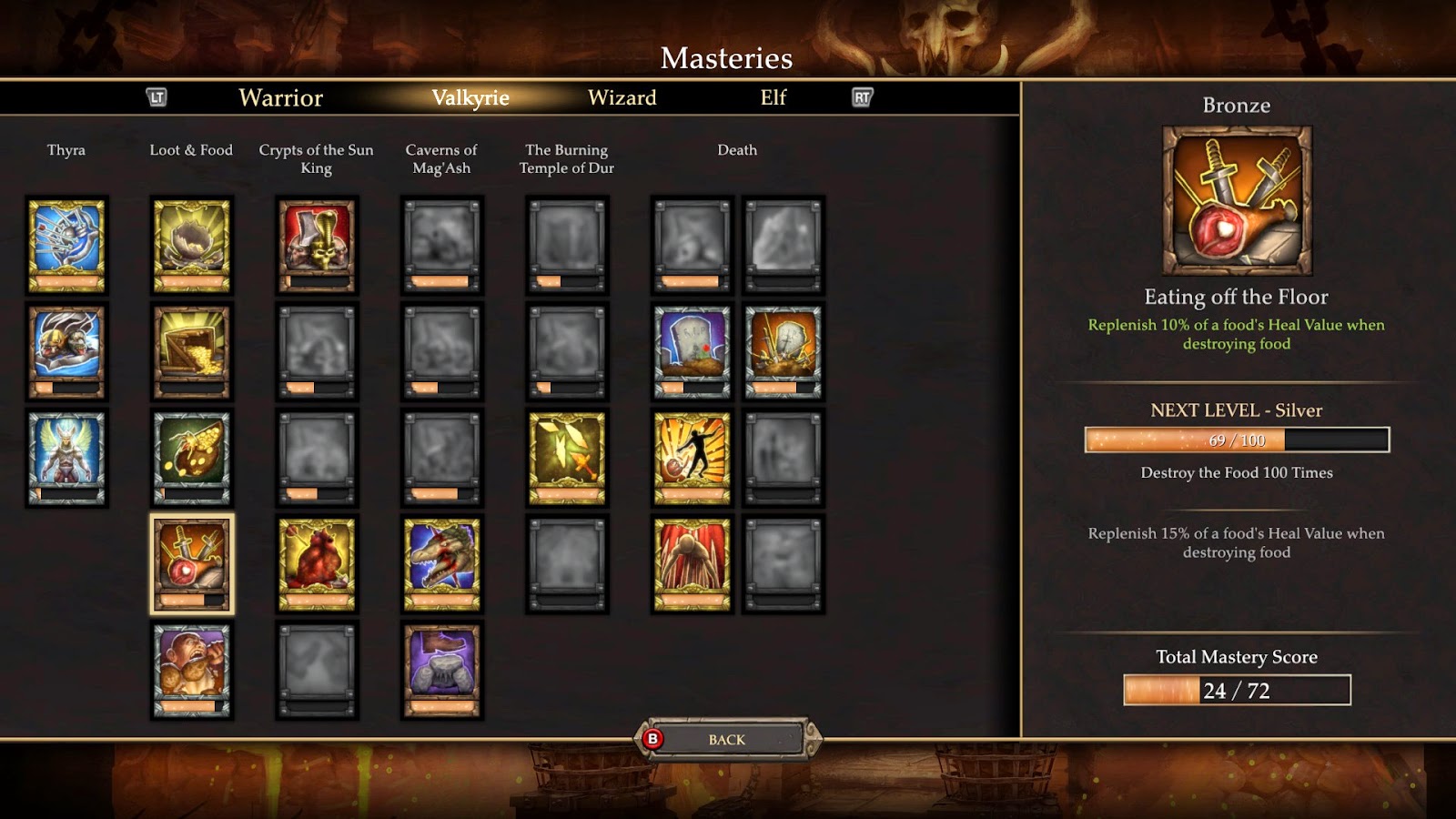 The Wizard – Last, but certainly not least. This class will feel distinctly familiar to those who have played Magicka.  Each of your buttons represents an element; push two then the cast button to unleash effects as varied as chain lightning, ice beams, fireballs (lobbed for aoe or on a direct line for single target), and several more combinations.  While there aren't nearly as many combinations as you’d find in Magicka, there are more than enough to keep things from getting repetitive as you forge your path through the dungeons.

Additionally, each of the heroes can unlock and purchase upgradeable relics which provide myriad effects such as a freezing nova, a rapid burst of speed, or even the ability to turn an enemy into a succulent turkey leg. Mmmm…turkey leg. You'll power these relics through the use of potions that you discover in the dungeon alongside the food you will inevitably shoot and gold you will inevitably loot. This brings us to an important point. The nicest new feature I've found so far is that, while hunting your food is a classic staple of the Gauntlet games, in its newest incarnation there are now masteries which provide benefits for accomplishing certain goals over the course of your playthrough. Yes, even shooting the food.  So while it might suck to lose out on that sweet, sweet meat when you desperately need it, do it often enough and you'll actually unlock a mastery so that destroying the food will grant you a portion of life back regardless. This is true for things like dying as well. In their effort to make you less afraid of failure, Arrowhead has found a way to soften the various blows enough to keep even the most reckless or clumsy of players having fun and engaged in the act of progressing through the adventure with plenty of objectives to chase.  That said, I'm not trying to imply the game is easy or made for casuals. Arrowhead included several levels of difficulty which will challenge even the most veteran players and reward them with Vanity gear to customize the look of their chosen champion. 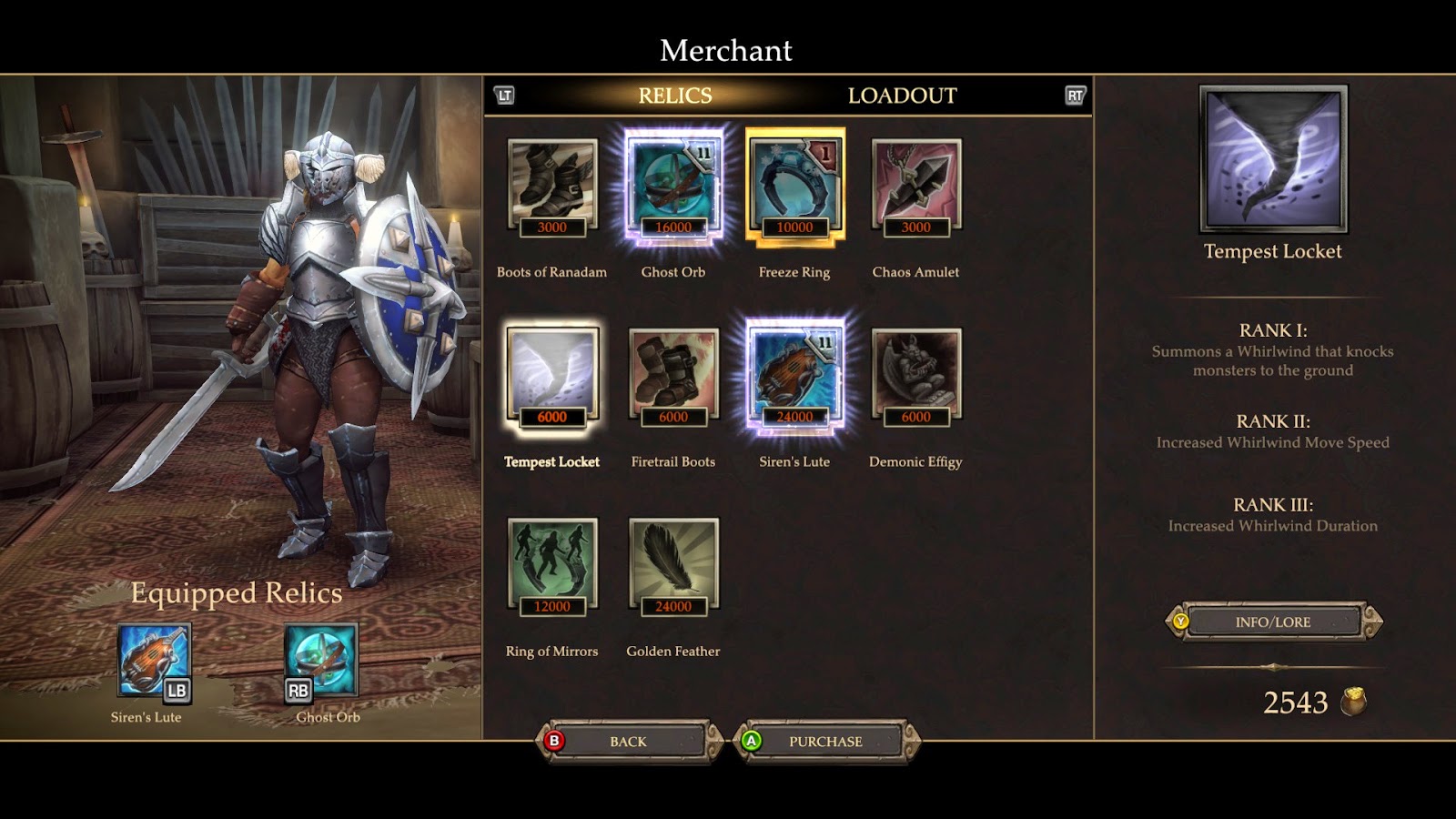 But what about the actual gameplay?

Honestly? There isn't a whole lot of variety in the types of monsters you face and with 3 Zones, 4 Doorways per zone, you're only looking at about 4-5 hours of playtime for a single run-through on normal. I think that Arrowhead expects most people to beat it once with each class or grind away at the higher difficulties, which isn't an unlikely outcome if you have a solid group of friends to tackle these with. Gauntlet has always been best with friends and the same remains true of its newest incarnation. The game, while technically possible on single-player, isn't really enjoyable on the easier difficulties. It's grueling slog through room after room of either kiting massive trains of guys hoping to take a few swipes here and there or just brute-forcing your way through in a war of attrition with food.  I'm sure some folks out there could manage it, but I found the solo experience to be pretty miserable.

On the flip side, it's one of the best Co-Op experiences (You can play Co-op either local or online) I've had all year and I can easily see myself wanting to try out each class at least once.  Skillfully chaining special moves and herding the hordes of the baddies hunting you down in order to kill them in the most efficient way possible is a real blast and the 70/30 cooperative/competitive split is a hallmark for the Gauntlet franchise. Let me take a moment and explain for those again not familiar when I mention the 70/30 split.  While you are all working together to get through the dungeon alive, there's also a strong incentive for each player to be the one with the most gold at the end of each level.  Arrowhead has even added a fun little twist where each level has a special crown; kill the monster wearing it and it drops to the floor. The first player to snag it and put it on their head can try to wear it out of the level, but take a single hit and it goes flying for someone to snag the rebound. It's always an amusing moment when half the group is trying desperately to kill the spawning towers that generate monsters and the other half is just making a mad dash to collect all the gold in the room.  Or, better yet, when the jerk with the crown needs food badly and you manage to snipe it right before they can get to it. Hey maybe if you wanted the food so bad you should have let me get the crown!

So all in all I'd say check it out, if not right away then for sure during one of Steam's many Sales. It's a good time if you can get at least one friend to tag along and great with a full party of 4.  Despite the relatively short run time the price is right at $20 and it's out on Steam now.

Assorted final thoughts:
- Some sort of gamepad controller (vs. your keyboard) is highly recommended.
- If you do want to give it a shot solo I strongly recommend using the Warrior or Valkyrie.
- It's got Steam Trading Cards and Achievements if that sort of thing matters to you.
- The Leaderboards seem to be broken or easily exploited so you’re best off not getting too invested in them.

Gauntlet is rated M for mature gamers ages 17 and up. This review was drafted using playtime with the Windows PC version of Gauntlet. The game is slated to be released on iOS and Linux later this year.