Round Up: Boston FIG

Posted by Kel
Four posts in four days...what is this sorcery? This is apparently what happens costume construction is slow and there are games to be given away.

On Sunday there was a brief mention that the GIR and I had ventured out to the Boston Festival of Indie Games (a.k.a. Boston FIG) this past weekend. Boston FIG has been this semi-elusive for us for the past couple of years. Every time PAX East would roll around we’d see a flyer emblazoned with a giant fig leaf and say something like, “What a great idea, we should totally go,” only to have something else invariably interpose on our schedule. This year the proverbial foot went down: we were going and that was that; so we trekked up to the campus of MIT and took in all Boston FIG had to offer.

Overarching Impressions of the Con:  Yes, I know. In all other convention round-ups this little synopsis would be the last part of the post but, since many of the games featured at the FIG are self-published or were actively searching for a publication deal, our usual methodology would have been tough to follow.

Boston FIG is a con still in the very early stages of development (2014 was only its third year), so it wasn’t surprising that the setup of the event was fairly simple. However, simple did not in any way equate to boring. After participating in the jam-packed spectacles of PAX East and Gen Con, it was so nice to be able to navigate the halls without forcibly becoming intimately acquainted with fellow attendees. On that note, there was something deeply appealing about an event filled with up-and-coming developers. As we’ve discussed, some of the most beloved gaming conventions are now straining under their own weight so it was profoundly refreshing to sit down with innovators and fellow game lovers to assist in the creation of brand new games. Authentic. That probably sounds at least a little hokey, but it felt very authentic and true to the avocation of gaming as a whole.

Of course there were a few hiccups, namely the disparity in preparedness between exhibitors, but overall Boston FIG was a very welcoming and fun experience. To break down the highlights from Boston FIG, I’ve divided the rest of the post into Digital and Tabletop sections. Let us away to the games!

Digital – While the offerings amongst the video games were quite diverse, retro-themed pixelated graphics, zombie-heavy premises, and physics-based puzzle games were the most common themes on the digital floor. We were able to try out a whole heap of games and these guys were the titles that made the biggest impressions.

Catlateral Damage - There's been much ado about goat simulators in the past year or two, but if you're more inclined towards felines, then Catlateral Damage is probably the game for you. Billed as the 'premier first-person cat simulator', Catlateral Damage allows players to indulge their inner kitteh, mostly by wrecking havoc on various domestic settings. The game fully funded its Kickstarter back in July and will soon be available on both PS4 and Steam. Check out the playable demo here.

Prismata - A product of MIT's own Lunarch Studios, Prismata is a thoughtfully crafted hybrid of Starcraft-esque resource management and Hearthstone style head-to-head combat. Two players are presented with a roster of units (this roster varies with each matchup), some that provide resources while others that have offensive/defensive capabilities. Each combatant must manage both aspects of their roster, quickly building a viable microeconomy while also engaging in iterative combat with their opponent. Lunarch is currently looking for beta testers and you can learn more about Prismata here.

Red Survivor - Mustachio Games presented this turn-based strategy game and, though it was still in pre-alpha, it garnered considerable attention. In the midst of the Russian Revolution, those recently slain in the conflict suddenly rise from their graves to pose a new threat to those still living. Players control groups of survivors struggling to re-create a rudimentary society amidst the devastation. The game featured most of the 4 components of your standard 4X game and hopes to have all 4 of those Xs, as well as a heaping helping of historical narrative, in place by the time they've finished with development. Sound interesting? Sign up to be a beta tester/get early access here.

Tumbleweed Express - This title, by the Dirigiballers, aims to combine all the best parts of the railshooter and tower defense genres. Set in an alt-history Industrial Era, players ride, manage, and defend the eponymous train from the aeronautical forces of greedy businessmen and corrupt law enforcement. There was also a surprising amount of narrative depth and strategy from something that initially presents as a steampunked shooter. You can access the same demo we played at the con here and learn much more about both the game and its creators on the Tumbleweed Express Kickstarter page.

Tabletop  -  The demos offered in the tabletop section alone could have kept us occupied for hours. Like the Digital section, there was a broad range of offerings in tabletop, but evil minion-centric themes and build-as-you-go boards made repeat appearances throughout the hall. 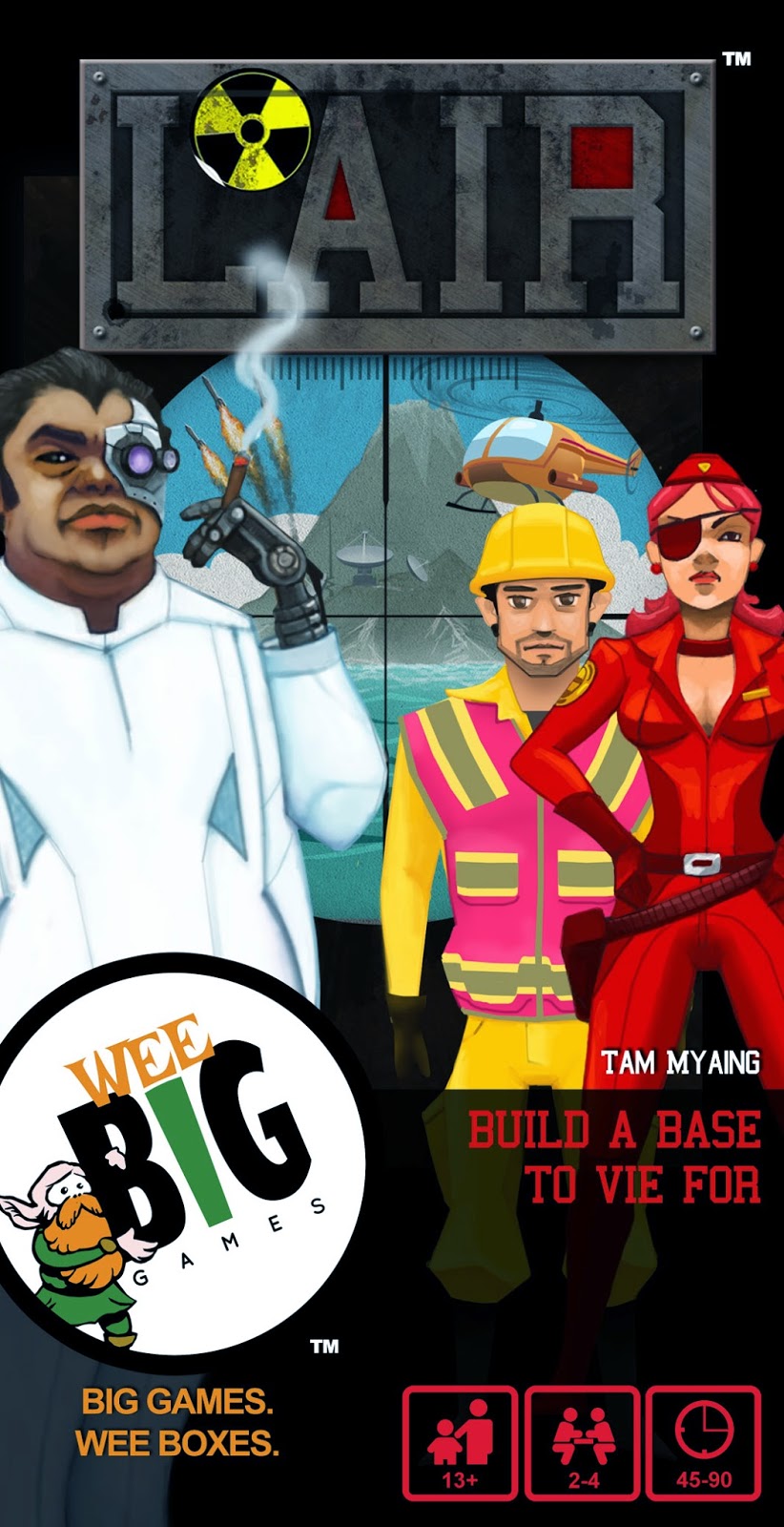 Lair - Wee Big Games touts itself as 'deep strategy in a small box' and Lair lived up to every bit of that claim. 2-4 players are each trying to curry favor with Big Boss by building out a secret underground base (and undermining the base-building efforts of their peers). Despite having few components, Lair felt like a legitimate Euro game and, though there's an immense amount of modularity available in the game, we all felt pretty comfortable with it after a round or two of play.

Moonquake Escape - A Pair of Jacks Games had one of the most eye-catching booths and one of the most hotly contested demos on the floor (with Lair drawing an equally large crowd). Players find themselves desperately attempting to escape a high-security prison facility on the lonely planet of Zartaclaton as the latter is slowing giving away to collapse. The game is in the very early stages of development and we look forward to seeing more from this interesting premise.

Moriarty's Machinations - Think Avalon or Resistance with a Sherlock theme and a bit more structure to the deductive process of the players (in the form of personalized narrative information). Moriarty's Machinations is currently in the midst of a Kickstarter campaign if you're keen to learn more about this game.

Phoenix Covenant - A beautifully rendered melange of Magic: the Gathering and Final Fantasy Tactics, Phoenix Covenant will be a deeply satisfying play for lovers of both CCGs and strategy games. The title boasts not only stunning artwork, but also an immense array of in-game lore. Players can also select between head-to-head combat and and a player-versus-environment mission-style mode. It was very clear that Phoenix Covenant was a carefully crafted labor of love from the brothers behind Hikari Games and we look forward to seeing more from them.

Pleasant Dreams - Fresh off their successful Kickstarter campaign, Aerjen Games was keen to display their new artwork for this 2-player psychological thriller. Participants face off, beginning in a state of peaceful slumber and descending quickly into a nightmarish state. Featuring quick, but profoundly tense and often unsettling rounds, Pleasant Dreams will leave you wanting another go.

After such a great experience, the GIR and I are looking forward to visiting Boston FIG every year!