Cosplay: Rage of the Red Lanterns

Posted by Kel
And just like that October is staring us in the face. Seriously, where did this year go? I know I say that a lot, but it’s continually astounding that each successive year seems to pass more quickly than the last. Just crazypants.

Anyhow, with the onset of October we begin to see the preparations for Halloween kick into high gear. Or, rather, actually seasonally appropriate gear since we’ve been seeing Halloween paraphernalia all over most retail outlets since mid-July. Bleh and fie on holiday creep. A couple years ago I described that, despite centering around costumes, Halloween does not hold any special appeal for me. At this point in the year I’m usually borderline burnt out on costume-making and see the holiday as more of an opportunity to eat all the noms and watch all the animated Halloween TV specials. This year I’ve been game to at least make a few new pieces, if only to indulge my addiction have fun and get practice with certain techniques that’ll hopefully be of use in other ventures.

So for Halloween I’ve made a variant on the Mera costume I wore for Gen Con. The first version was standard/pre-New 52 Mera; the new iteration will be Mera as she was depicted during her brief tenure in the Red Lantern Corps during the Blackest Night arc. Mera’s Red Lantern garb is similar to what she’s usually drawn in, but has a decidedly more predatory feel. Her green scalesuit is swapped out for a red one and there are distinct alterations in her accessories. 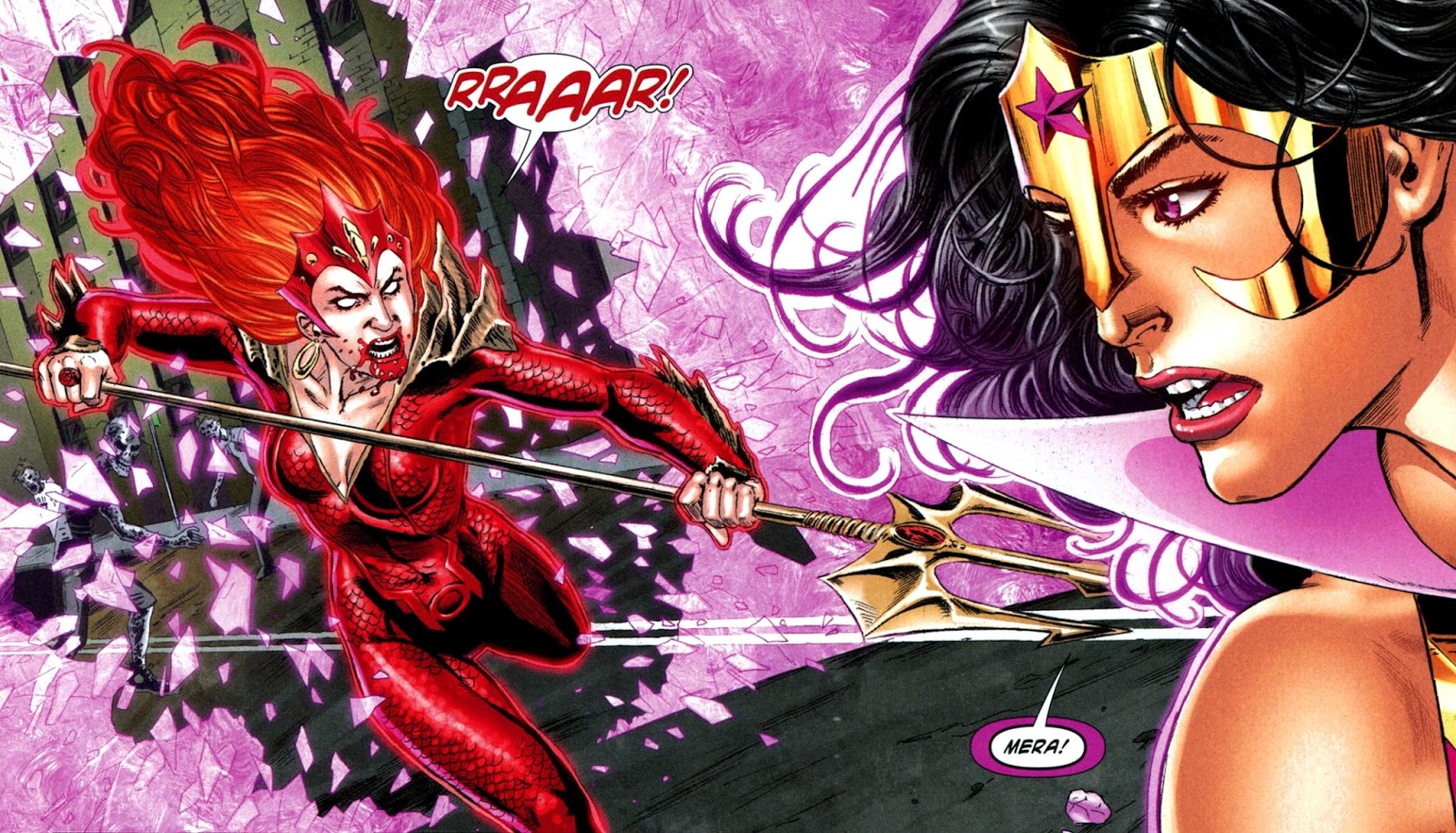 To make the scalesuit I used this shiny fabric and the same basic pattern from the green suit. Besides the fabric, the one other change I made between the two suits is that I moved the zipper from the back to the front. Though doing so makes the suit easier to wear, I don’t think I’ll make that a fixture in any future catsuits as the suits tend to present better with the zipper hidden away. 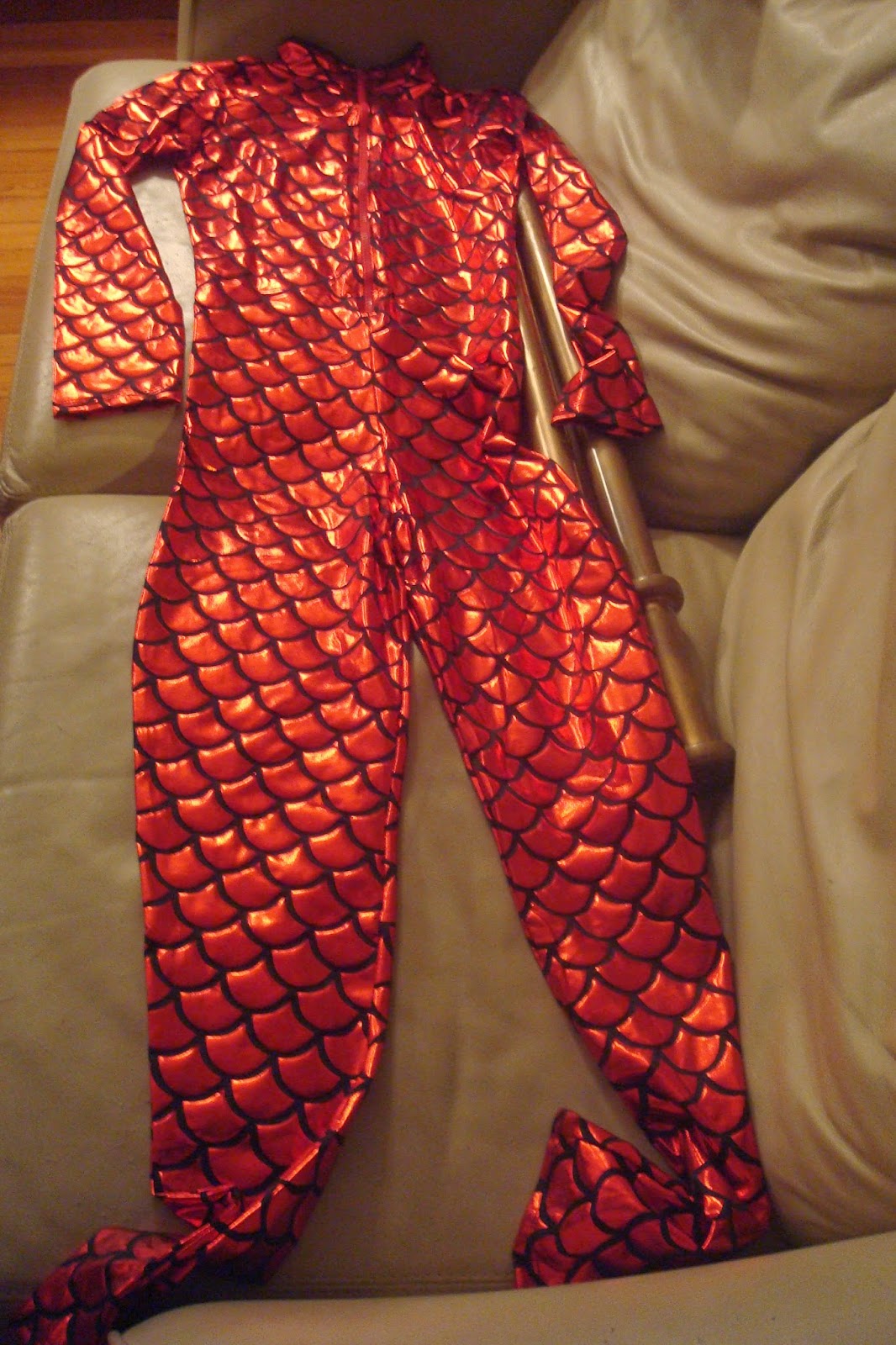 The Red Lantern version of Mera’s suit has a few other features that her green suit does not, namely shoulder/wrist spikes and a stylized Red Lantern insignia that begins on her abdomen and extends up towards her shoulders. Both the wrist and shoulder spikes ended up being made from fabric (red Lycra and a plain white cotton respectively) that I shaped with some hot glue and floral wire. The spikes may end up being remade if this costume makes its way to a convention, but this quick-and-dirty method is perfectly fine for a Halloween party.

During her stint with the Red Lanterns, Mera wields a trident that features a large red stone in the center of the main crossbar. It’s different from the five-pronged weapon that Aquaman usually carries and, were this for a con, I’d have made a replica. However, since this is for Halloween I’m going to try and get some more use out of the trident I had commissioned for Gen Con. The poor trident was a little worse for wear after its outing in Indy. Between being handled for hours and making the thousand mile trip back home its paint has lost most of its luster and I’ve had to reinforce the two outermost prongs. A little Gorilla glue, a few passes with some 800 grit sandpaper, and this Krylon spray paint has given the trident new life.

That leaves the crown and accessories. The shoes and earrings that saw use in the green suit Mera outing will get to make another appearance. The Red Lantern ring is this (borrowed from the GIRs collection). The crown, however, needed to be made from scratch as it’s quite different than the standard crown of the Queen of Atlantis. Per the comics, the headgear is broad tiara that simultaneously rests on the wearer’s hairline and also frames the face while coming to a point at mid-forehead. Foamstock (a.k.a. craft foam) is a good choice to attain this unorthodox shape while also being very lightweight.

Foamstock is one of those much-lauded crafting materials in the cosplay world, and for good reason. It’s cheap, lightweight, extremely pliable, and plays well with most other craftables. It’s also a member of a very large family of synthetic materials called thermoplastics. We’ve talked a bit about other types of thermoplastics earlier this year during the construction of the Transistor and, since hard acrylics like plexiglass and foamstock are plasticy cousins, some of the tactics we used to work with one will function similarly with the other. The biggest similarity between hard acrylics and foamstock is the thermo part of thermoplastic. Heat not only gives each of these synthetics their initial shape, but can be used to reconfigure them into something new. One of the more significant differences, however, is the amount of heat that you can safely expose each to. Foamstock has a much higher combustion point than hard acrylics and it responds more quickly to a heat source.

Why is that? Is it because there are air bubbles in the foam?

That’s a big part of the difference. Though there are air bubbles in both types of material, there are definitely more in foamstock than there are in any of the hard acrylics. Those bubbles (which are usually carbon dioxide that’s been forced into the plastic) are what make foam light and pliable. Correspondingly, those bubbles are the primary differentiator between the two major types of foamstock: open cell versus closed cell foam. Open cell foam is usually what you find sheets or rolls of in a craft store. It gets its name from the type of bubbles, or cells, inherent in the foam itself. They are ‘open’ in that they frequently merge or share ‘walls’ with one another, leaving very little actual plastic in the finished foam. The bubbles in closed cell foam, however, do not share walls or merge with one another; each bubble is completely self-contained within the plastic. This causes closed cell foam, like Sintra, to be much denser and often more expensive than its free-flowing sibling.

For the crown, I purchased a visor made from open cell foam from the bargain bin at Michael’s. Often craft stores will sell pre-made foamstock items that make for excellent foundations for costume pieces since these items have already been coaxed into a curve or other helpful shape. I removed the plastic backstrap from the visor, then folded it in half and traced an approximate shape of Mera’s crown onto it in pencil. For large cuts in the foam, it’s ok to use scissors (smaller or more intricate cuts tend to go more smoothly with an Exacto knife). After the initial cuts, I refined the shape with an Exacto knife, then cut out the small accent pieces for the crown from a sheet of slightly thicker foamstock. A quick pass with a heat gun allowed for additional shaping, particularly of the small triangle that drapes down onto the forehead. We’ll go over the specifics of how to use a heat gun with foam and other lightweight thermoplastics in a separate post. 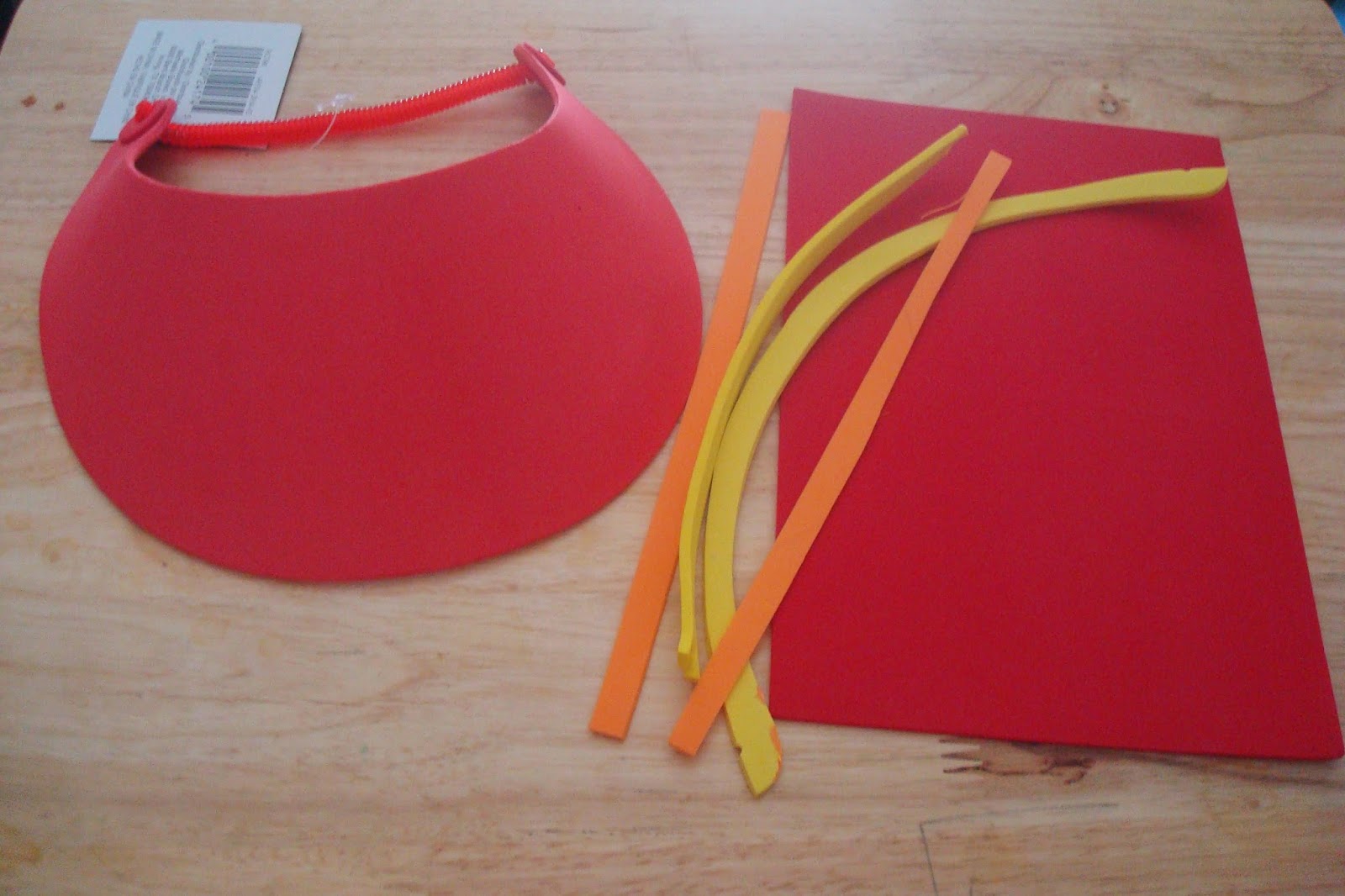 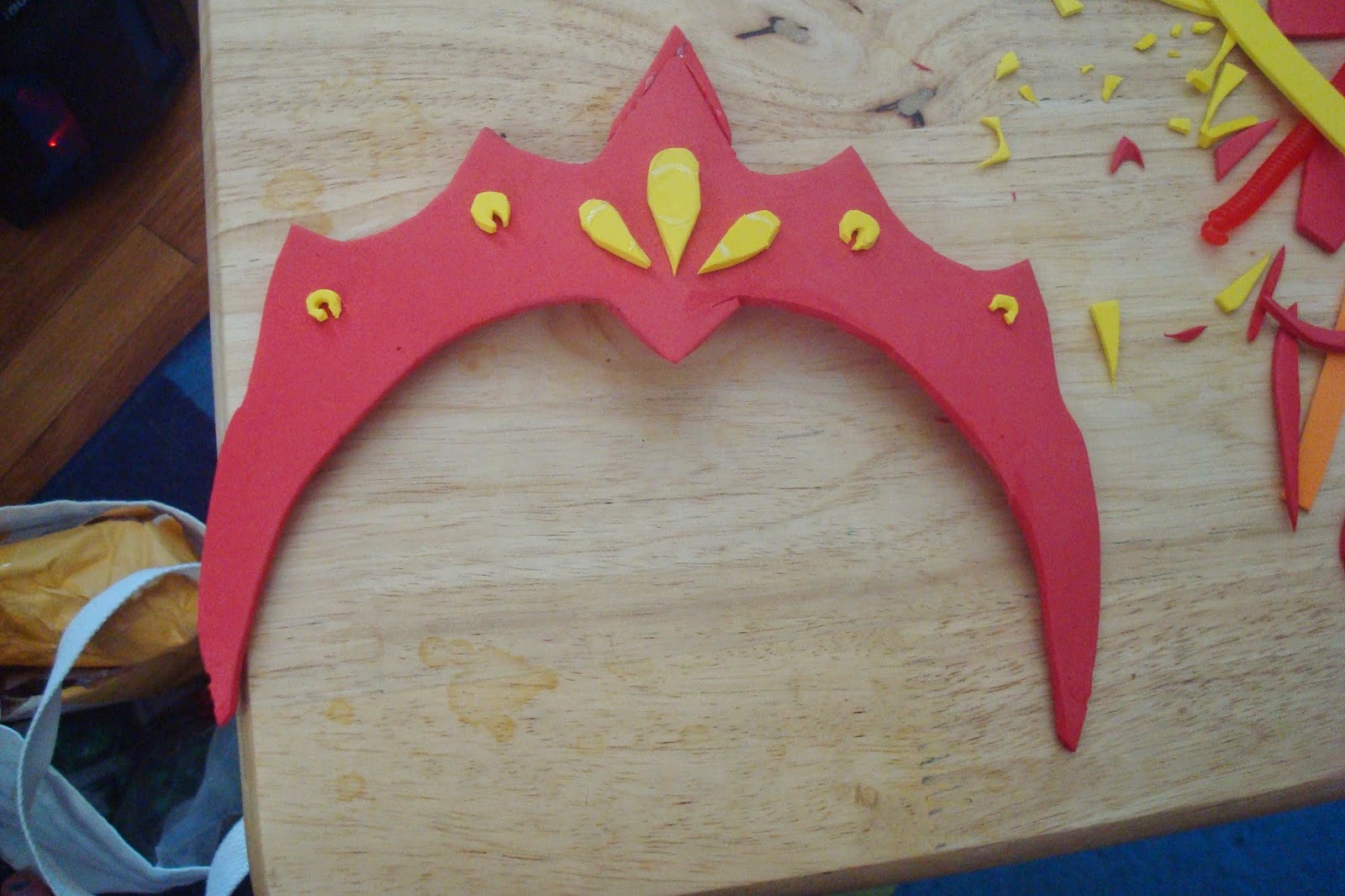 Hot glue and foamstock get along swimmingly so it only took a little to affix the accent pieces. Once everything was situated I broke out the new ingredient: gesso. Gesso is an often acrylic liquid primer traditionally used to prep canvasses before an artist would begin to paint. Cosplayers often rave about gesso because it creates a smooth painting surface on porous things like foamstock or its thermoplastic cousin Worbla. Despite working with foamstock before, I’d never felt that my pieces were large or vital enough to warrant the purchase of a separate priming agent. However, as I now consider the options for making giant feathers, I wanted to give gesso a go, if only to see how well it worked and how much weight it would add to a piece. 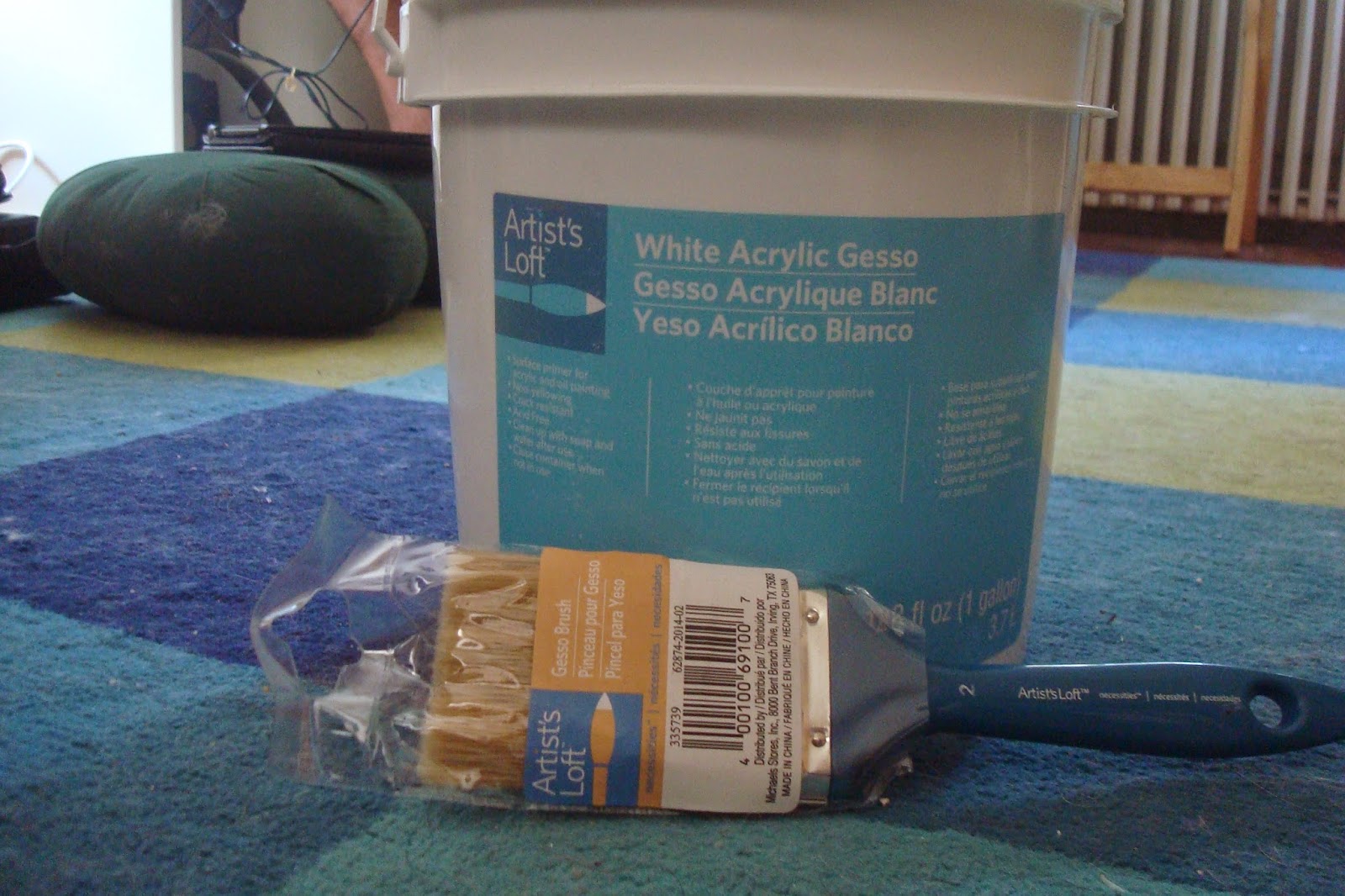 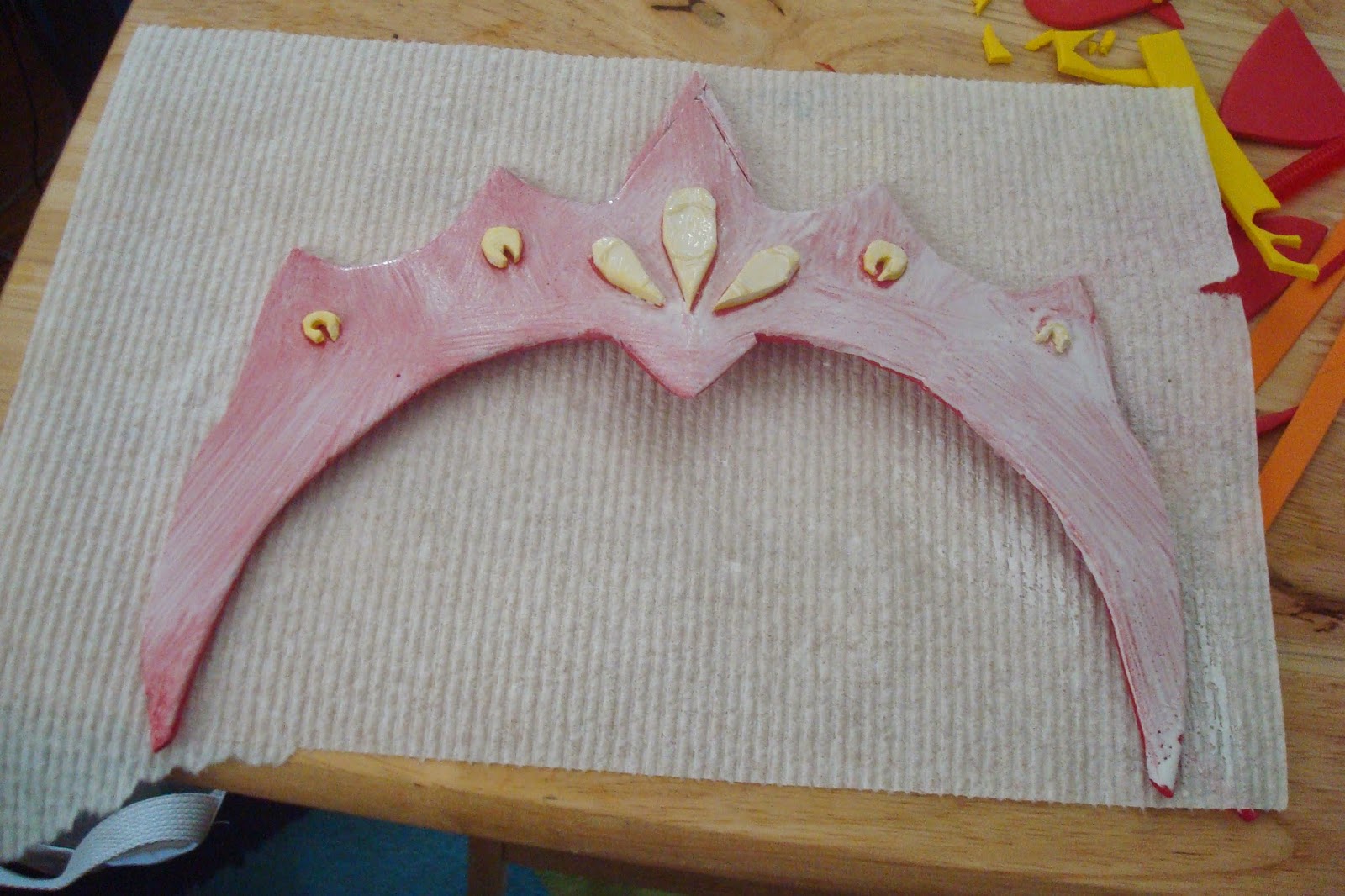 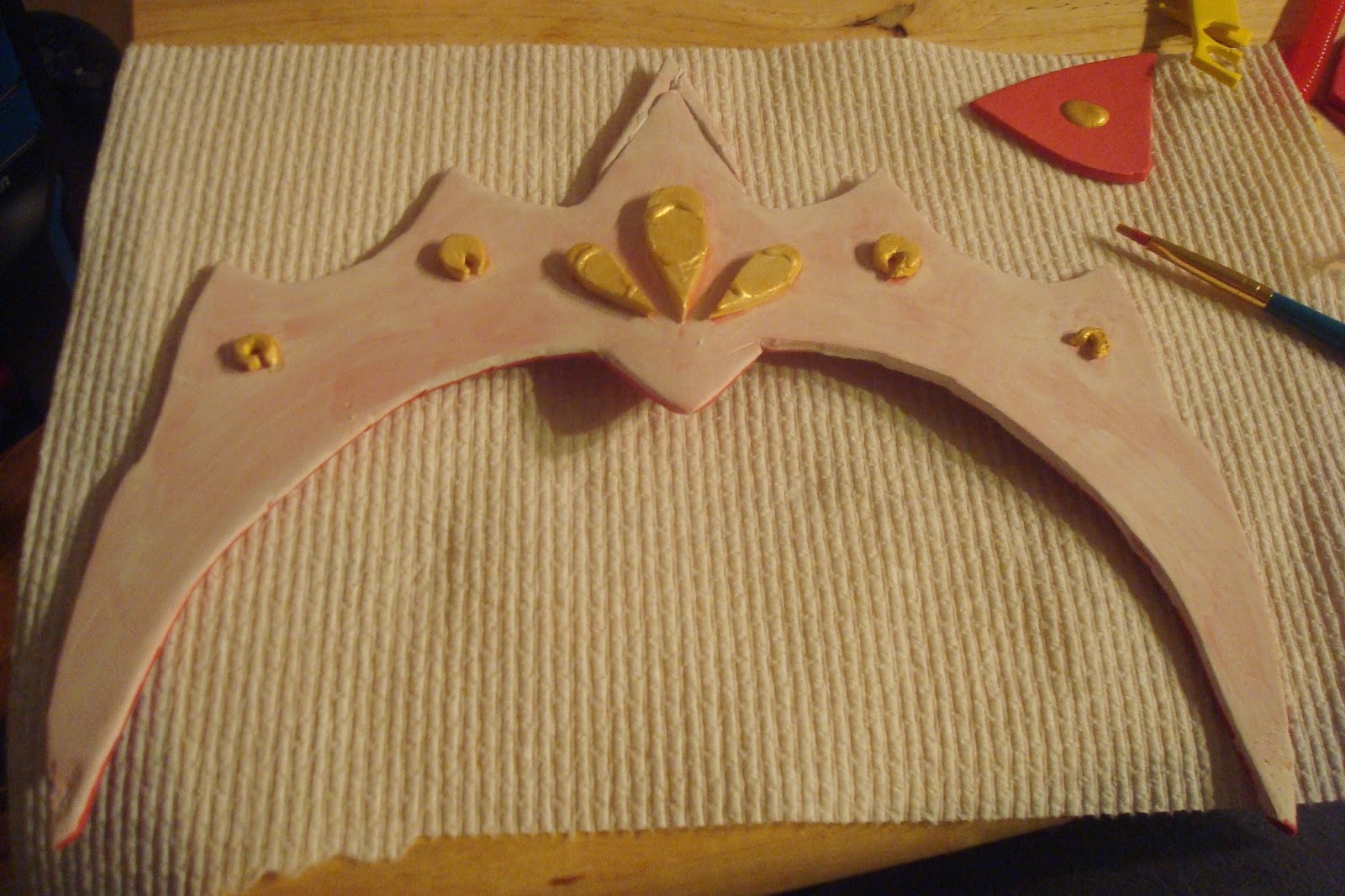 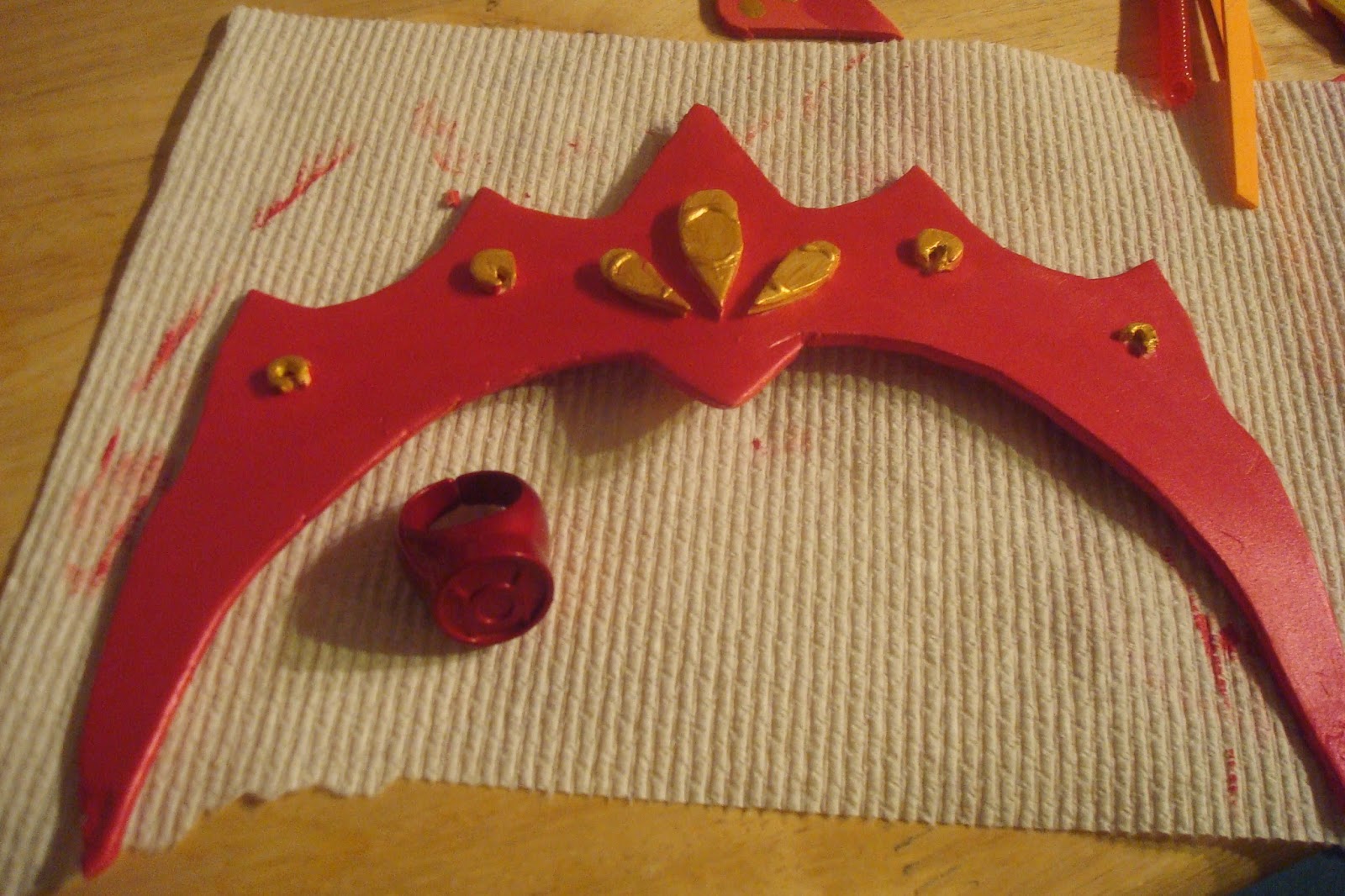 The gesso worked brilliantly, taking mere minutes to apply and adding negligible weight to the crown itself (though we’ll have to see if that holds true for larger pieces). It cut down the number of coats of paint I needed to apply by about half while also making the reds vibrant and the golds lustrous and genuinely metallic. Furthermore, the gesso allowed for a finite degree of control over the texture of the piece, which will almost certainly come in handy in future projects.


A bit more hot glue to attach a pair of plastic combs to the undersides of the crown and it was done! Now with the costume part done all the focus can go towards making new, fun fall recipes for Halloween. Keep an eye out for those posts in the near future!