Welcome back readers! I know the pace of reviews from me has slowed a tad, but frankly that’s just testament to how good the current release schedule has been to us PC Gamers. Between  Wasteland 2, Shadow of Mordor, and so many others I’ve hardly been able to tear myself away from playing to get back to writing. It’s like I’m eating from the best buffet in the world and I really should be telling folks about it so they can enjoy it too, except my mouth is crammed full of so much goodness I can’t speak and the only time I open it is to shove more food in. 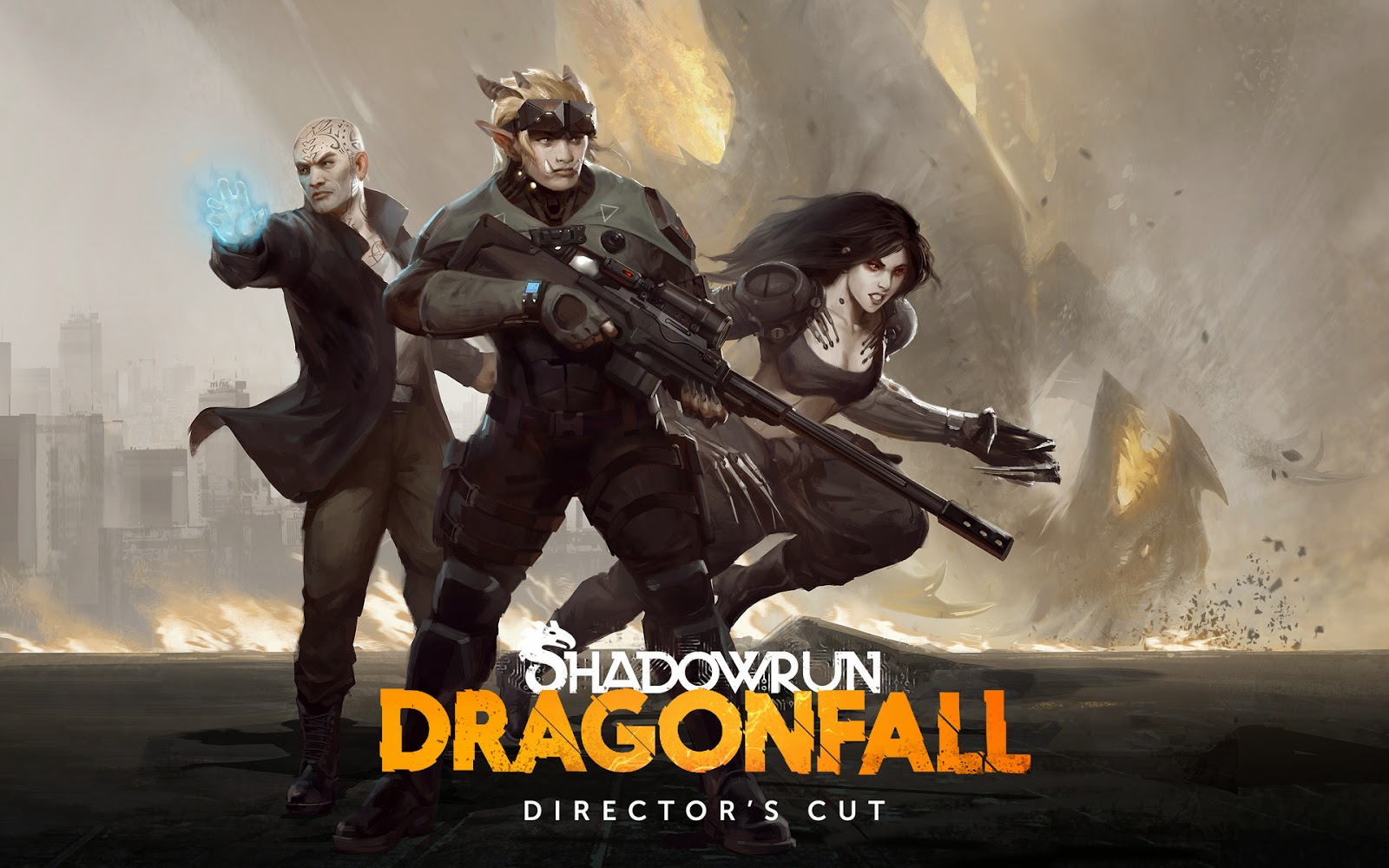 Yet here I am acknowledging that the buffet will still be there by the time I finish bringing you the good word on some of the many dishes there. This time it’s to talk about Shadowrun: Dragonfall the much awaited “Berlin Campaign” and sequel of sorts to the reasonably successful Shadowrun Returns (both titles coming courtesy of Harebrained Schemes). While originally Dragonfall was a form of free DLC for backers of their Kickstarter for the original Shadowrun Returns, the new Director’s Cut turns Dragonfall into a standalone title with tons of new content and improvements.

To be frank the reason this review isn’t as fresh as say my Mordor review is that the DLC version of Dragonfall was basically corrupted and I couldn’t load past the second mission which obviously put a damper on things. That being said, as an owner of Dragonfall I received the Directors Cut for free and, low and behold, all my previous technical issues were resolved (due to the stand alone nature of the Director's Cut edition is my theory). This was most excellent because I really wanted to experience and hopefully endorse this product to others. 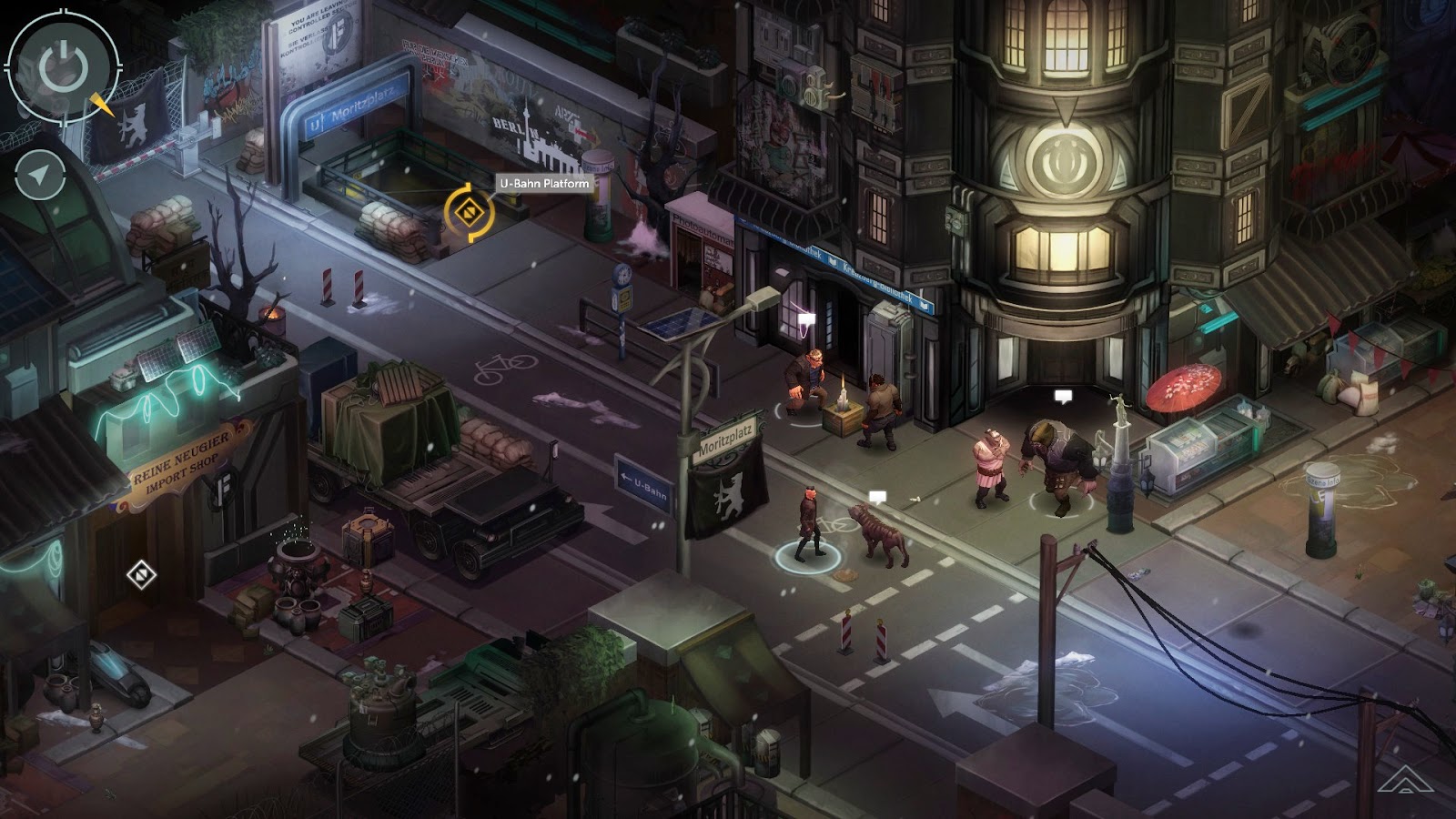 For those unfamiliar with the world, Shadowrun is a cyberpunk-urban fantasy cross-genre role-playing game. It's set in the years 2050-2070 following a great cataclysm that has brought magic back to the world and said mystical force struggles to coexist with advancing technology. The classic RPG has spawned a few videogame iterations, ranging from cult classic to toxic waste. As someone who has played the pen and paper RPG, I can assure my fellow Runners that Dragonfall (Director's Cut) is the best and most definitive digital version I’ve ever had the pleasure of playing. Being self-published, Harebrained Schemes kept their Kickstarter goals for the original Shadowrun Returns modest and, for the most part, delivered on their promises of an “authentic” experience but personally I felt the game was a little lackluster. I’m of the opinon that it had been so long since fans had something even remotely resembling the pen and paper version that they were willing to overlook bland combat and twitchy game mechanics. That’s not to say it was bad, but I had wanted and hoped for so much more from the project. Thankfully the Director’s Cut of Dragonfall provided what Returns should have been to begin with. 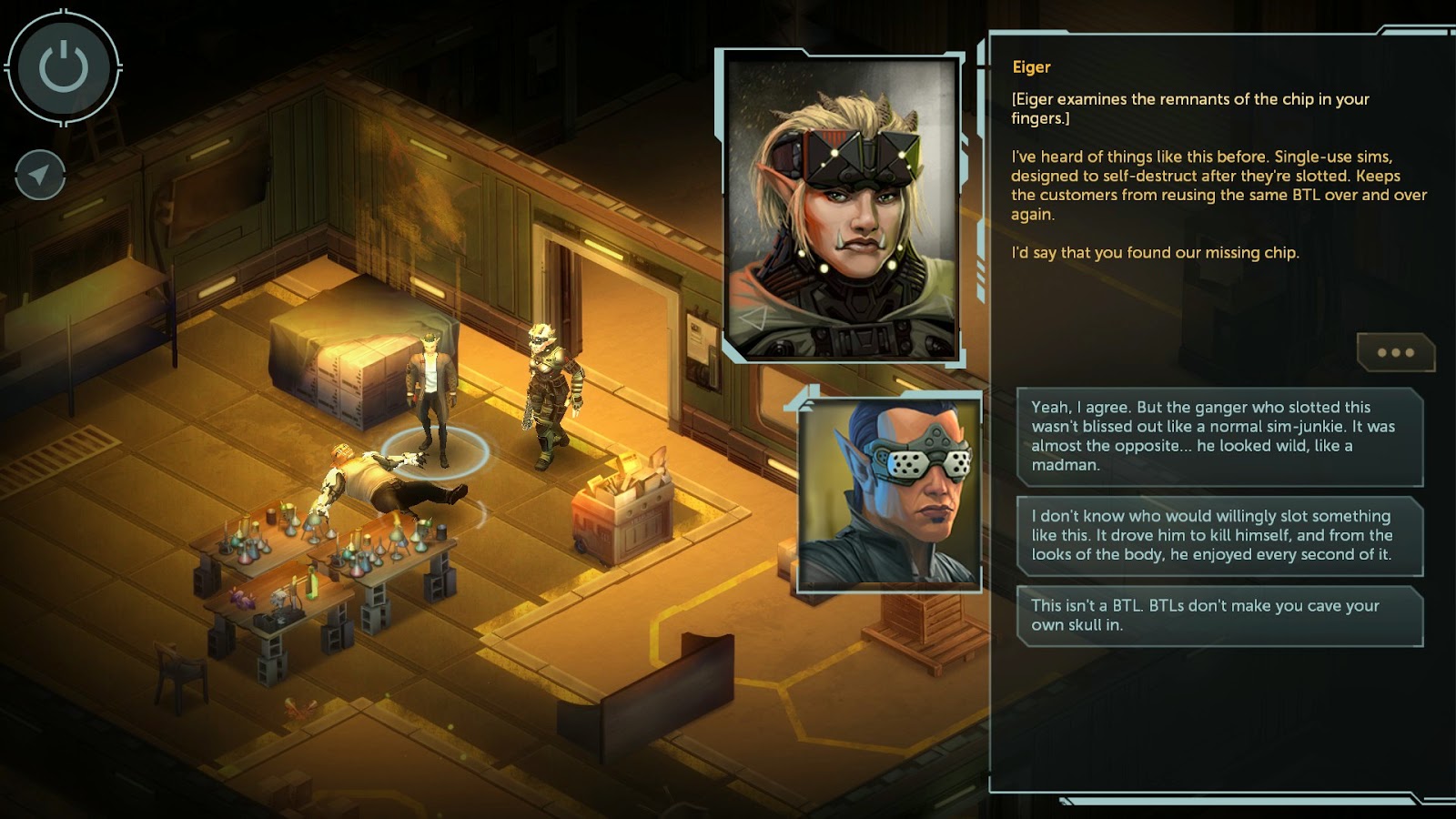 The improvements really come in the form of conversation tree depth and size and scope of playable areas. Karma (the mechanic for character improvement) also seems to be doled out at more appropriate pace. Where in Returns you could become a master of everything in the form of all guns, decking, and magic Dragonfall seems to actually force you to pick a class/specialty and really focus on it. The main storyline itself is pretty standard Shadowrun fare but the quality of writing is quite good. Along those lines, I was really impressed by how much more fleshed out the rest of the NPCs in your group were this time around. They weren’t just “the decker” or “the adept” filling a role but, rather, they all had their own back stories and motivations, which, in turn, caused me to feel like I'd formed real bonds with some while butting heads with others. Sometimes this manifested in the form of them approaching me with special missions related to their mysterious backgrounds. Other times it resulted in them leaving the group or straight up betraying me mid mission. 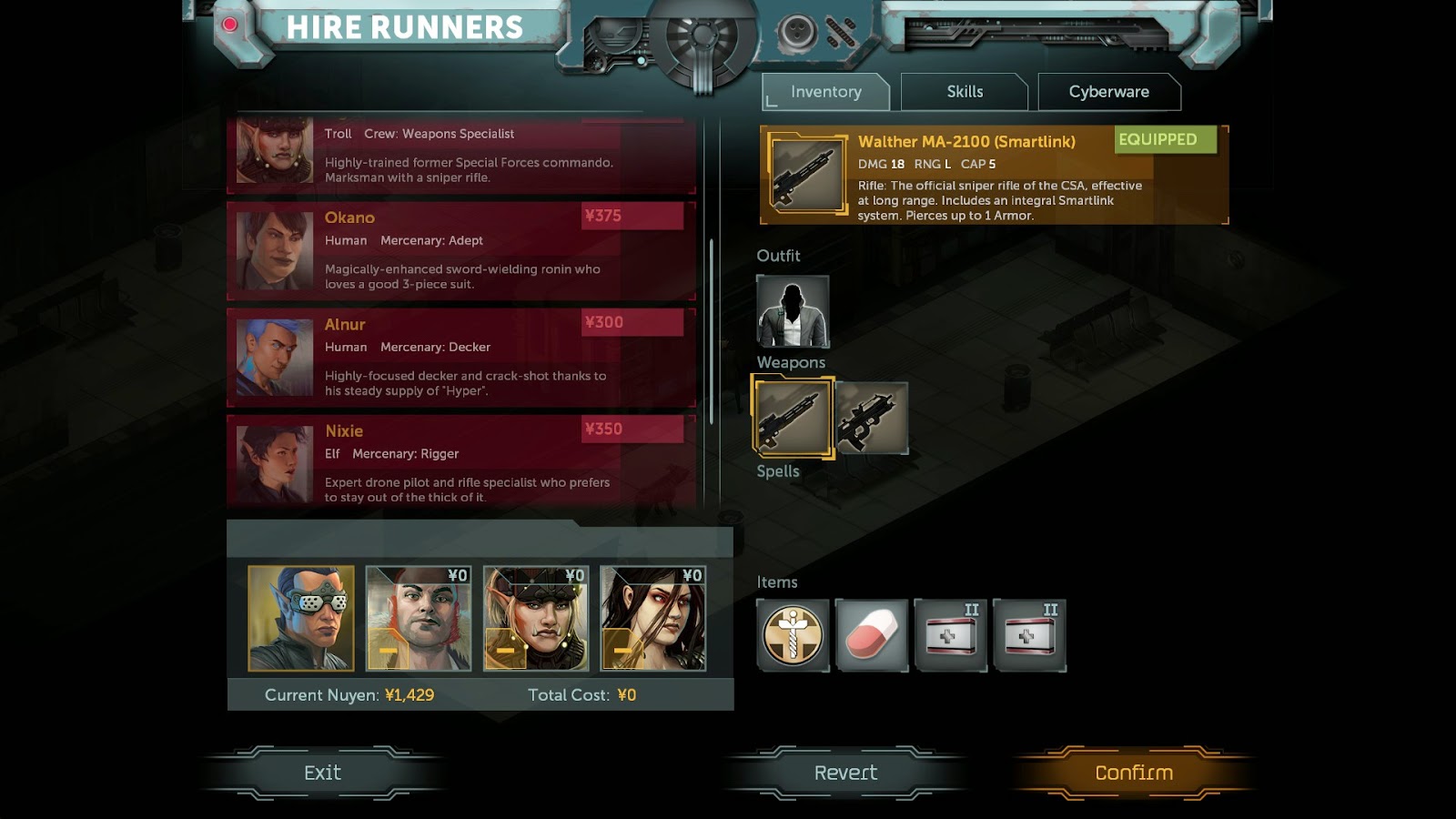 The side quests are another area that really shine, allowing the players to delve into the morally grey zones that help define Shadowrun as the leading RPG in its genre. Without giving too much away in the form of spoilers, the side quests provided by The Lodge really made me question what mattered most to me as a player and what I thought would matter to my character. I know not everyone plays games with that level of immersion but, since I had modeled my first character after one I had used in several pen and paper campaigns, I found myself making choices and exploring paths I otherwise might not have if I had been simply grinding for achievements or the most efficient way to beat the main story. 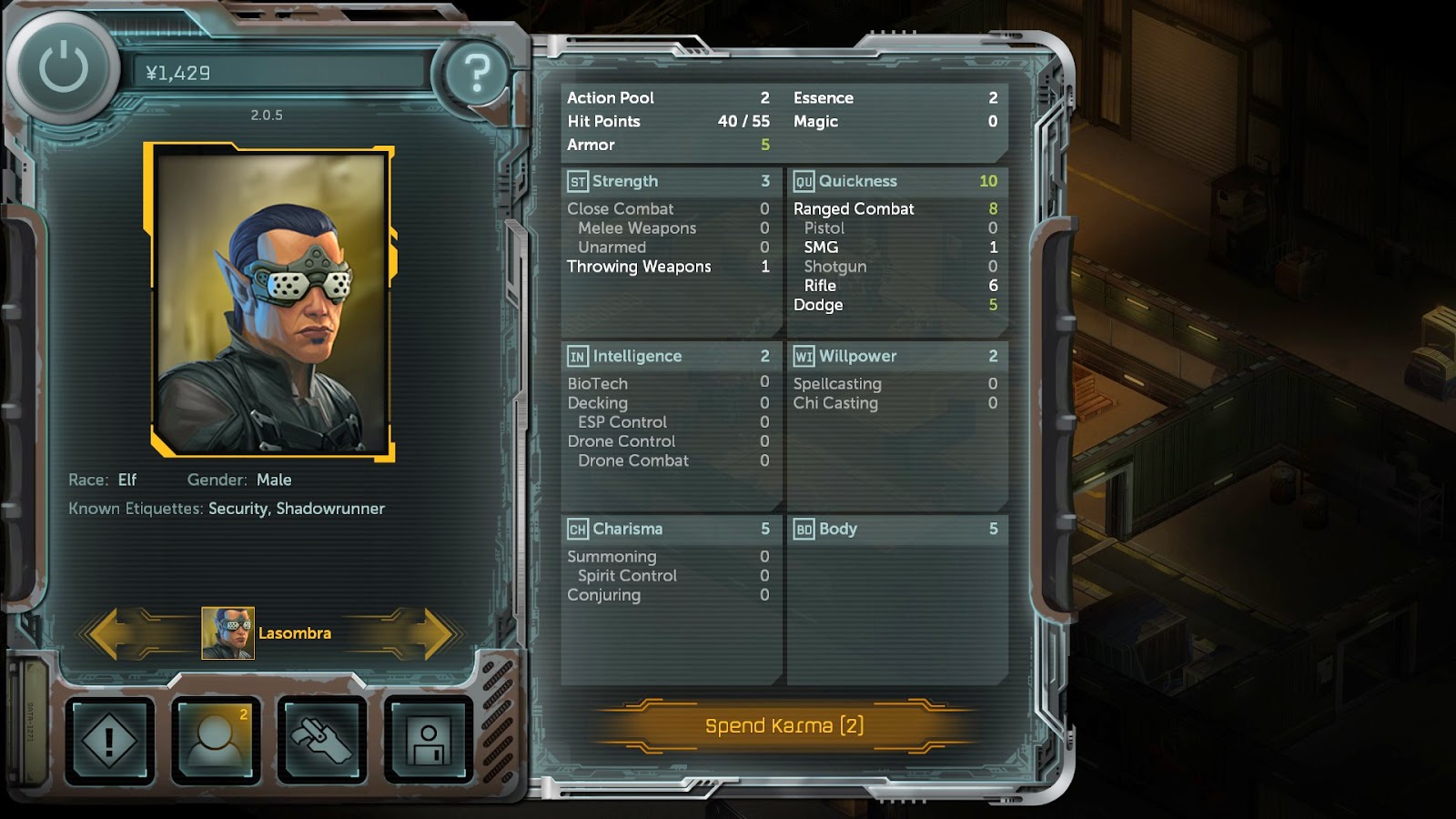 I don’t want to end on a down note, but some of the more frustrating aspects from Returns exist in Dragonfall as well. The turn-based tactical and RPG aspects are all still present and you still can’t rotate the screen, forcing an isometric camera-in-the-corner POV. The fact that you can’t rotate the camera leads to situations where you end up running into the open instead of behind a piece of cover one square over because you can’t actually click on the tile you want or, say, NEXT to the enemy you are trying to shoot because the cursor isn’t exactly over your target. The skill trees haven’t been updated at all and, while some changes were made to decking, it’s still not exactly fun. The combat is still AP based and it tends to be stiff and stilted. 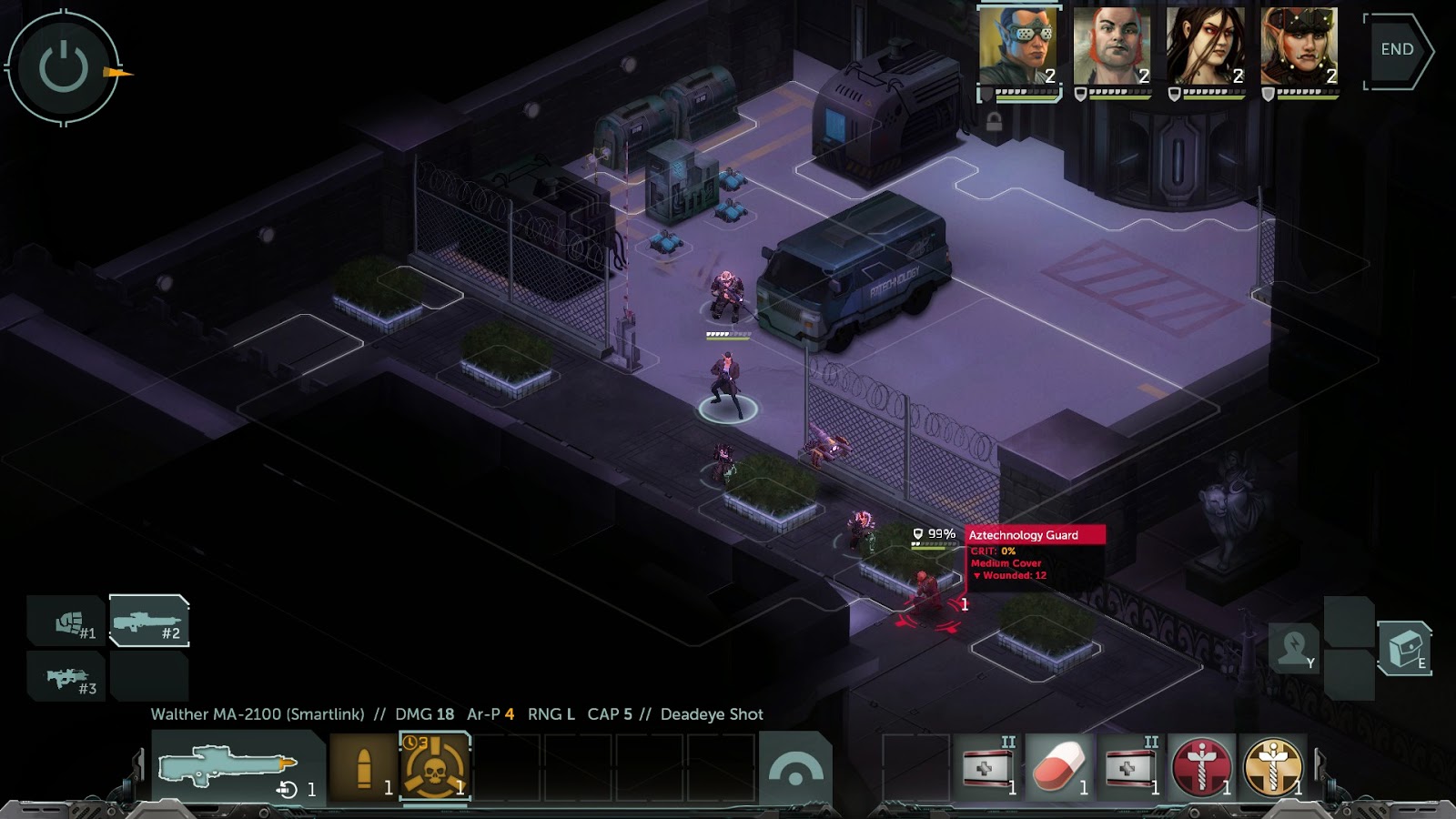 With games like XCOM: Enemy Unknown, Wasteland 2, and Divinity: Original Sin showing how dynamic and exciting/engaging AP turn-based combat can be with cover and destructible terrain, I wonder why Harebrained didn’t bother to try and liven things up a bit. It’s a perfectly serviceable system, and I guess there’s something to be said for the policy of, “if it ain’t broke don’t fix it,” but it’s clearly the weakest element of the game. Dragonfall also ramped up the difficulty as compared to its predecessor by having more enemies in play and somewhat better AI but, frankly,  I found combat to be a chore to endured in order to get to the best parts of the game. What were the best parts? Those would definitely be the various stories and choices I had to make, and conspiracies I would uncover.
So, basically I can heartily endorse this to current fans of Shadowrun Returns or the pen & paper RPG because, thematically, the game is spot on. The writing is very high caliber and roleplaying aspect is legitimately enjoyable. It’s easily the best videogame adaptation of the franchise that I’ve played to date. Unfortunately for videogame fans who aren’t already fans of Shadowrun it’s a much tougher sell and, while it pains me to say it as a longtime fan of Shadowrun, there are better options out there if you’re just looking for turn-based tactical combat, namely the titles mentioned in the paragraph above.
Shadowrun Dragonfall Director’s Cut was released on Steam September 18th currently priced $14.99 and has Achievements and Trading cards if that sort of thing matters to you.