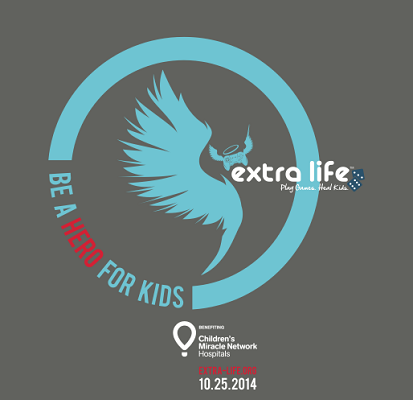 It's...Sunday? <<flops over>> I'll issue apologies now if this post seems incoherent, as Extra Life 2014 drew to a close only about three hours ago. It was an excellent run, arguably easier than last year due in no small part to the release of Civilization: Beyond Earth this past Friday, but the GIR and I are definitely feeling the effects of sleep deprivation this morning. Despite that fatigue, the GIR managed to crank out his traditional gaming-inspired haiku! And, of course, being a little tired is a minuscule price to pay in order to help out the Children's Miracle Network. The numbers are still being tallied as of this writing, but it looks like this year's effort surpassed the 4 million USD mark, which is more than half a million dollars over last year's total.

Good times and good games all for an excellent cause. A special shout out goes to the donors that supported team the Care and Feeding of Nerds and the members of our Steam community who offered their time as Player Two for either the GIR or I. We couldn't have done it without you!

So today's post will be a bit on the short side, but there's still plenty of goodness to be had on This Week in Geekdom!

The Xbox One is coming up on its first birthday and it hasn't been the smoothest of sailing this past year. Here is what Microsoft officer Phil Spencer had to say about the console and how it stacks up against the PS4.

Titanfall now has a co-op wave defense mode. Check out the details for this update and the forthcoming DLC, Deadly Ground, here.

Ever wanted a detailed look at the vehicles in the Marvel-verse? Well these schematics will give you just that.
TV/Movies

It's still two weeks away from formal release, but Chris Nolan's Interstellar is already racking up millions of dollars in ticket sales.

Fans of the A Song of Ice and Fire books have long since been made aware that the TV series differs quite a bit from the source material. These original Westeros lovers are in for more conversation fodder, as season five of Game of Thrones is set to deviate even more from the texts.

Bronies rejoice! Hasbro is in the process of developing a My Little Pony movie. The project is set to release in 2017.

He may be fresh off his Nobel prize win, but Eric Betzig it's letting a little thing like a laureate slow him down. The most recent edition of Science contains a whole different set of research that may revolutionize microscopy all over again.

Even the sun was in on the gaming celebrations this week. Check out the pac-man-like images of this week's solar eclipse.

Vulcanologists have been working for decades trying to develop a detailed, accurate forecasting methodology for volanic activity. This is what they've developed so far.

Have you ever dreamed of owning your own real-life Transformer? Well, Brave Robotics, Astratec Corp, and Torny Co. may have inched closer to making that dream a reality.

Air New Zealand loves embracing its homeland's connection to the Lord of the Rings films, but they may have outdone themselves with their new in-flight safety video. (Bonus: Elijah Wood cameo!)