Posted by Nerdy Care
As the resident horror aficionado I feel it’s time to get into the Halloween spirit (pun intended).
To get into said spirit, I watched the 1970 film The Dunwich Horror. It’s an adaptation of the classic H.P. Lovecraft short story of the same name and stars Sandra Dee (Nancy Wagner), Dean Stockwell (Wilbur Whateley), and Ed Begley (Dr. Henry Armitage). The film is currently abailable on Netflix streaming, though I warn you now of the 1 star rating (Rotten Tomatoes gave it an optimistic 20%).
I find it difficult to express just how terrible this movie is. To begin with, almost nothing happens, just lots of boredom. To make the synopsis more entertaining, here is my version of events (warning: spoilers): "Anti-social shut-in from the country has lots of family issues and can’t play well with others, particularly the townsfolk. He tries to check out a book in the library, then befriends an uptown girl and invites her over for tea. They bond over a lovely weekend of sketchy rape drugs and weird dream 'adult relations'.  He reads her some Latin from the library book, bursts into flames, and then falls off a cliff.”
There’s a bit more happening towards the end of the movie, but most of it is just a slow dribble of boring. In a good horror movie, this down-time would be spent building up suspense and intrigue; it’s called a "slow burn" (which was masterfully achieved by Alien). It should give you an inkling of ‘there’s something not quite right’ and make you want to find out more.
That does not happen here. Much of the movie involved Wilbur making bedroom eyes at people. I believe this was supposed to be Presence from Vampire mythology: the ability to control the minds of others. But with the super bushy eyebrows, massive sideburns, and crumb-catcher mustache on Stockwell it just looks silly, despite his deep penetrating eyes... yes Wilbur, I will follow you... 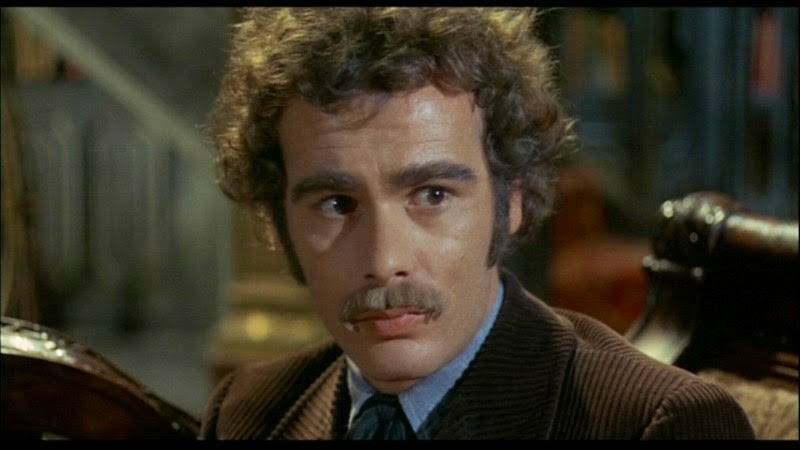 Aside from being bored, another issue I had with this movie was the ‘stupid villain syndrome’. Wilbur’s master plan is to bring back the Great Old Ones to wipe humanity off Earth... except that he’s a human too. Well, he’s part human – but enough that the Old Ones would probably kill him too. He’s taking one hell of a gamble that they won't destroy him (or maybe he just doesn’t care?). Or maybe he read some part of the Necronomicon that we’re not privy to: "P.S. - If you have any Great Old One blood then we totally won't kill you, we promise! For realsies!"
Music and sound were two other complaints from the movie. The music set the wrong stage for a horror movie; it sounded right out of a daytime soap. I kept expecting the words "These are the Cthulhus of our lives" appear across the screen. Additionally, the sound quality was poor enough to be distracting.

The script needed help as well. With stars such as Sandra Dee and Dean Stockwell, the issue was not lackluster acting as much as it was the lines did not do the actors justice. A large portion of Sandra Dee’s screen time was spent writhing around and making sexual moans. Her character was supposed to be having horrible nightmares, but the dreams were just wonky and odd. I usually would be the last person to say this, but the satanical dream sex went on way too long. It was just spliced together bedroom eyes, flashing bare legs, and a nightmare-moan-writhing Nancy.

A lot of Stockwell’s screen time was spent on close-ups of his eyes (it’s Presence time!) or very slow, drawn out, unnecessary motions during the ritual scenes.
Other examples of poor writing:
At least this movie does one positive thing: it gives us much better insight as to why Admiral Calavicci decided to join Project Quantum Leap. Either he wanted to go back in time and change things so the final ritual worked, or he figured that leap technology would yield insight into how to bring the extra-dimensional entities to Earth. It also makes sense as to why Prof. Armitage's son ended up investigating creepy happenings in Transylvania.
If you’re currently saying to yourself, “Self! What the hell is Elder Gias talking about?” let me introduce you to the "Gias Unified Movie Protagonist" theory. Similar to the Tommy Westphall Universe Hypothesis, all characters portrayed by an actor are either the same character wherever possible or ancestors/descendants of the character otherwise.  I can go into it in more depth and analysis another time, but with it you get some weird things happening like Judge Doom founding DirecTV.

I am very disappointed with the offerings of H.P. Lovecraft stories-turned-movies. The movie In The Mouth of Madness was slightly better despite being a very poor re-imagining of the amazing Lovecraft classic At the Mountains of Madness. If you have not read it, I highly suggest you do, though it is long for a short story. The Re-Animator is, in my opinion, probably the best Lovecraft movie adaptation.
This movie was so bad it wasn't even laughably bad.  It would be like an MST3K movie without the witty comments (which is to say, terrible!).  Please don't see it unless your goal is to see every movie ever made.
Recommendation: High!  You should totally watch this classic masterpiece. Totally. You clearly don't need to read my above review to tell you anything else about this movie. Reviews are unimportant. All that matters is the TL;DR at the end, right?  Seriously, go back and read the review or you will get what is coming to you from this TL;DR.  "Iä! Iä! Cthulhu Fhtagn!"