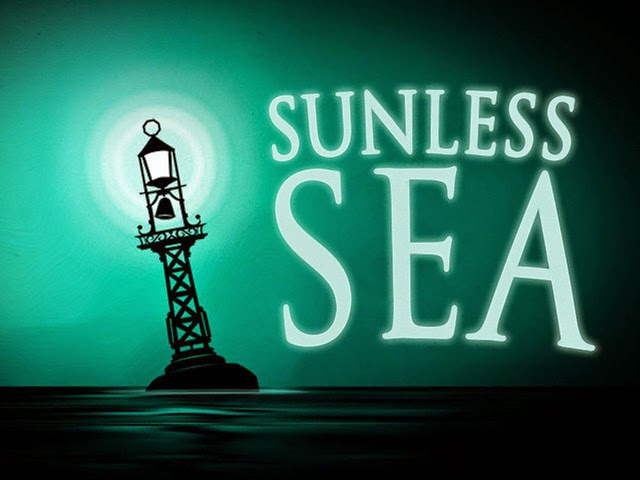 Ahoy readers! In an effort to get into the spirit of the season (See what I did there? I know - you wish I hadn't) I'm here to provide my thoughts on the Early Access title Sunless Sea, brought to you by Failbetter Games, who are the same folks responsible for Fallen London. If you're unfamiliar, Fallen London is an online free-to-play narrative RPG with Victorian fantasy flair set in a subterranean city. Sunless Sea is primarily a 2D map exploration and trading game with elements of survival RPGs thrown in the mix. The game is set in the oceans of the same universe as Fallen London. Try and imagine if H.P. Lovecraft had written Life Aquatic and you’ll have a reasonable idea of what’s going on.

Admittedly it takes a specific kind of fan to fit that niche, but I found my time with the game enjoyable enough. You begin by picking a background for yourself: motivations, portrait, and name, then it’s off to adventure in your rickety steamboat. That’s really how it starts; there’s no epic quest, no baroness to save, just you loitering around a dock deciding if you want to explore the city or head out. Even after exhausting all feasible locations in the starting area I didn't have any actual quests, which was kind of liberating for me in a strange way. I’m so used to obsessively looking for the nearest Quest Giver with a bright yellow "!" that I almost wasn't sure how to proceed. Instead I kept reminding myself this isn't the type of game that gives me a list of collectibles or side-quests and I’d have to make my own adventure. 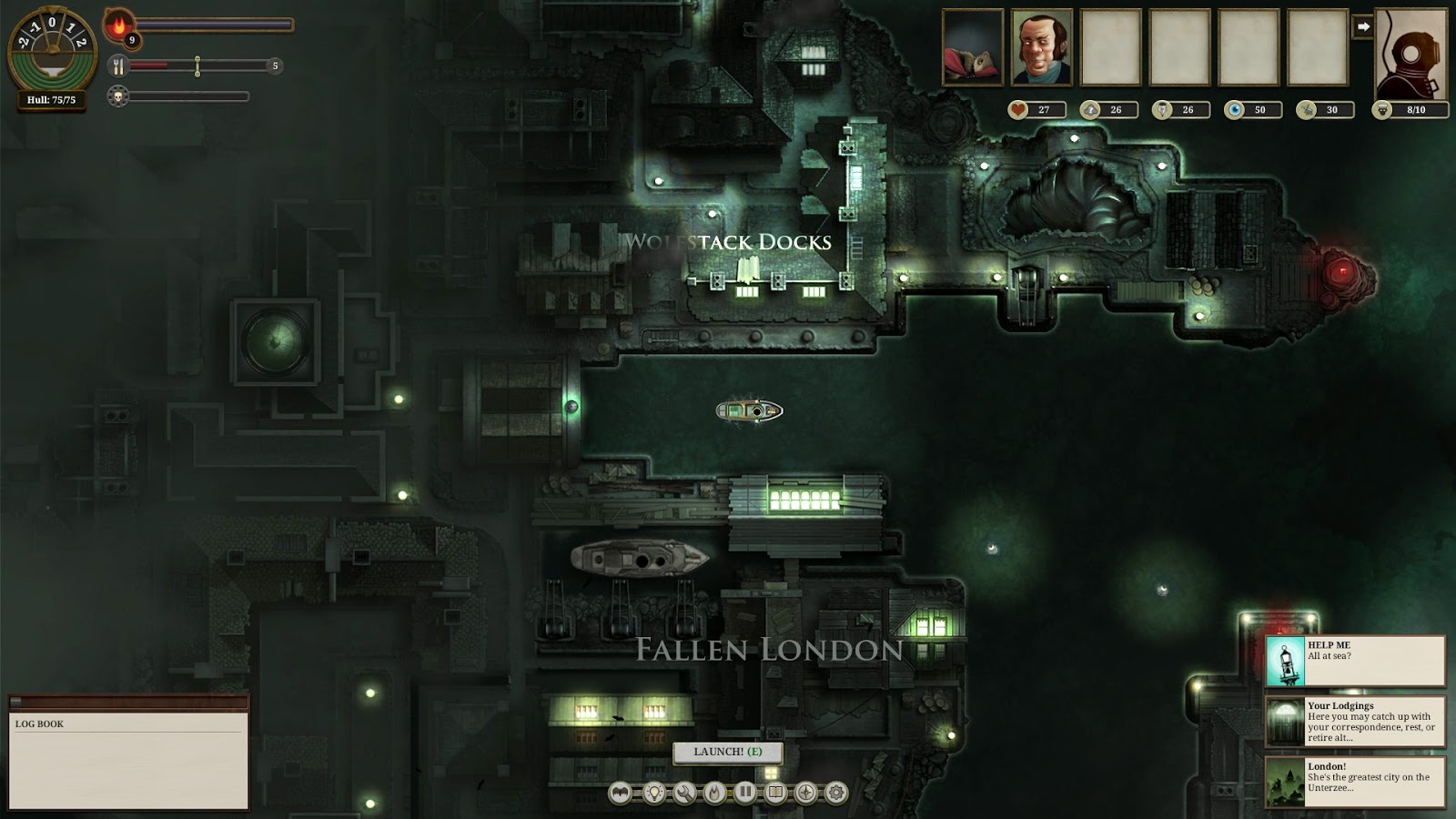 “Smuggle souls. Seduce your crew. Go mad and hallucinate lizards. You are the captain. It’s your call…” Or so the game’s homepage tells me, and so I start by trying to double my starting money gambling at a tavern before we leave. SUCCESS! Of a sort? I don’t make any money but I get items such as “Secret” and “Recent News.” The game doesn't bother to explain why this counts as a successful outcome since I had been looking for extra money to buy additional supplies (fuel & food) before heading out, but it turns out the Secret will let me hire an additional Officer for my crew. I suppose the new crew member could be eaten during the voyage if we run out of actual supplies, which seems increasingly likely because some idiot spent our starting funds playing cards. As I said, MISSION ACCOMPLISHED. With my fresh 'supplies' acquired I launch the ship and head out to the open seas. 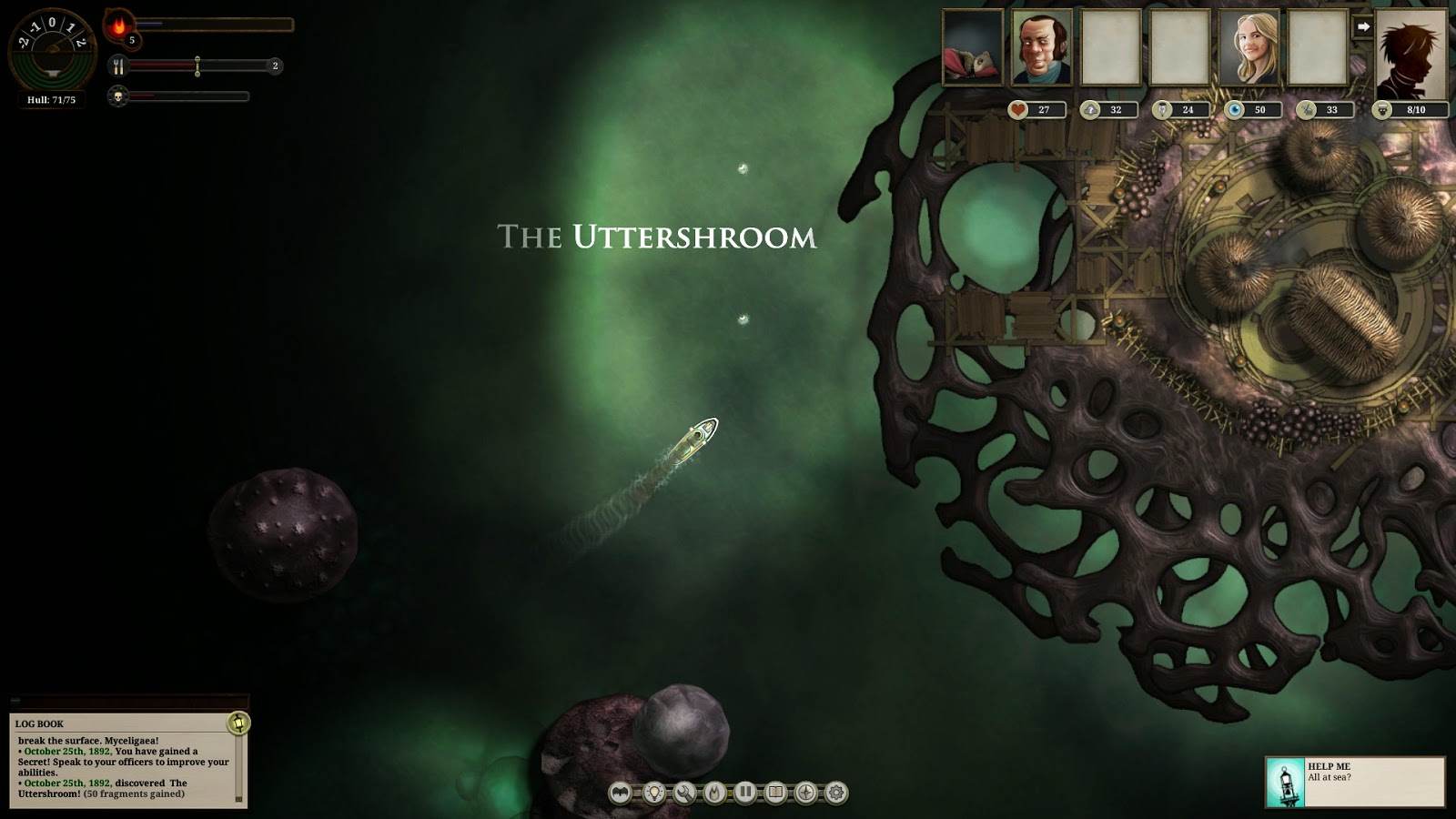 The art is hauntingly beautiful and the music an appropriate blend of melancholy and sea chantey, but some of the charm of starts to wear thin as I putter around. One thing become painfully obvious right away: the starting steamship sucks. It moves pathetically slow even at full throttle and the peashooter of a front-facing cannon is almost less effective than my searchlight at killing the bats that occasionally besiege and terrorize me on my nascent voyage. Where I was once anxious to discover and marvel at Lovcraftian horrors from the deep, I'm now loathe to run into creatures as simple as crabs for fear of my hull splintering apart. The combat takes place in real time and requires you keeping whatever your target is illuminated until your cannons can fire. With only a single location discovered I’m already forced to return to my home port for repairs. Sadly, I never make it back as an albino eel 3 times the length of my meager vessel sinks me during the return trip. It seems I've underestimated the Unterzee to my peril, but am pleased to learn before starting over that I can choose to carry on an aspect of this voyage to my next game. I'm given a choice of  my nautical charts marking where I've been, a single Officer from my crew, or my ship. Well, being too poor to customize my ship or buy anything better than the starter craft, and having sacrificed my Officer in the name of hunger, the choice seems obvious; at least I won’t have to re-map what little I did find my next trip out. I’m led to believe should you not retain your charts, the layout of the new world you would spawn in would change. 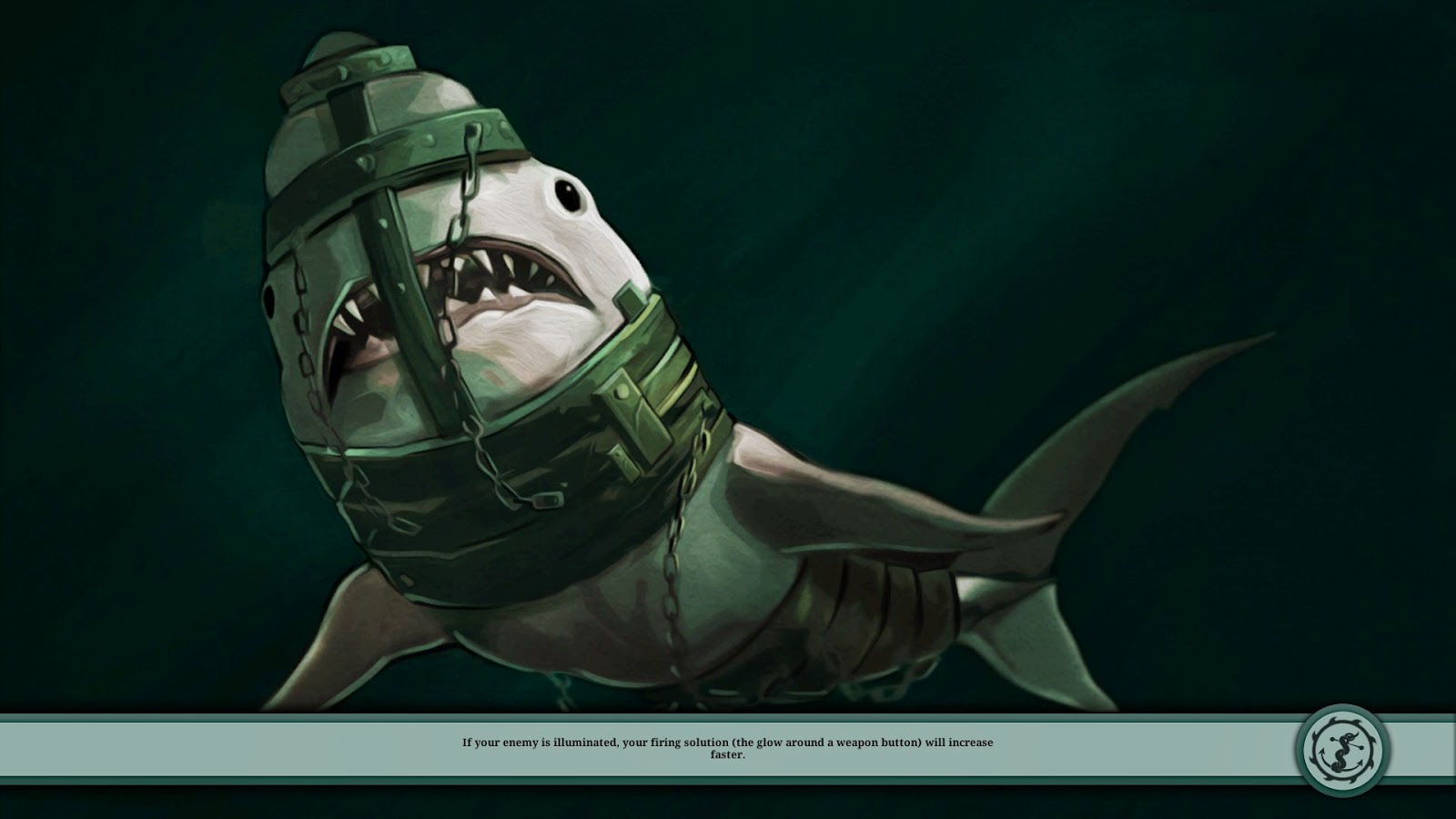 My second voyage out fared slightly better as I focused on exploring rather than monster hunting.
When exploring distant lands and ports outside of actual combat, the player often encounters situations that prompt him or her for their input regarding various courses of action. Would you like to survey the island from afar with your spyglass? Or send a landing party to scout the beach?  Peak through the windows of the abandoned crab shack or kick in its front door? Each option requires a various skill check of sorts based on one of or a combination of up to 5 attributes and/or items from your inventory: Hearts which help with inspiration, healing, defending, and terror checks; Veils for speed, stealth, deception, and range of being spotted; Pages for esoteric knowledge checks and converting resources; Mirrors for perception checks and speed of acquiring a target in combat; and lastly Iron which determines how much damage your attacks do. 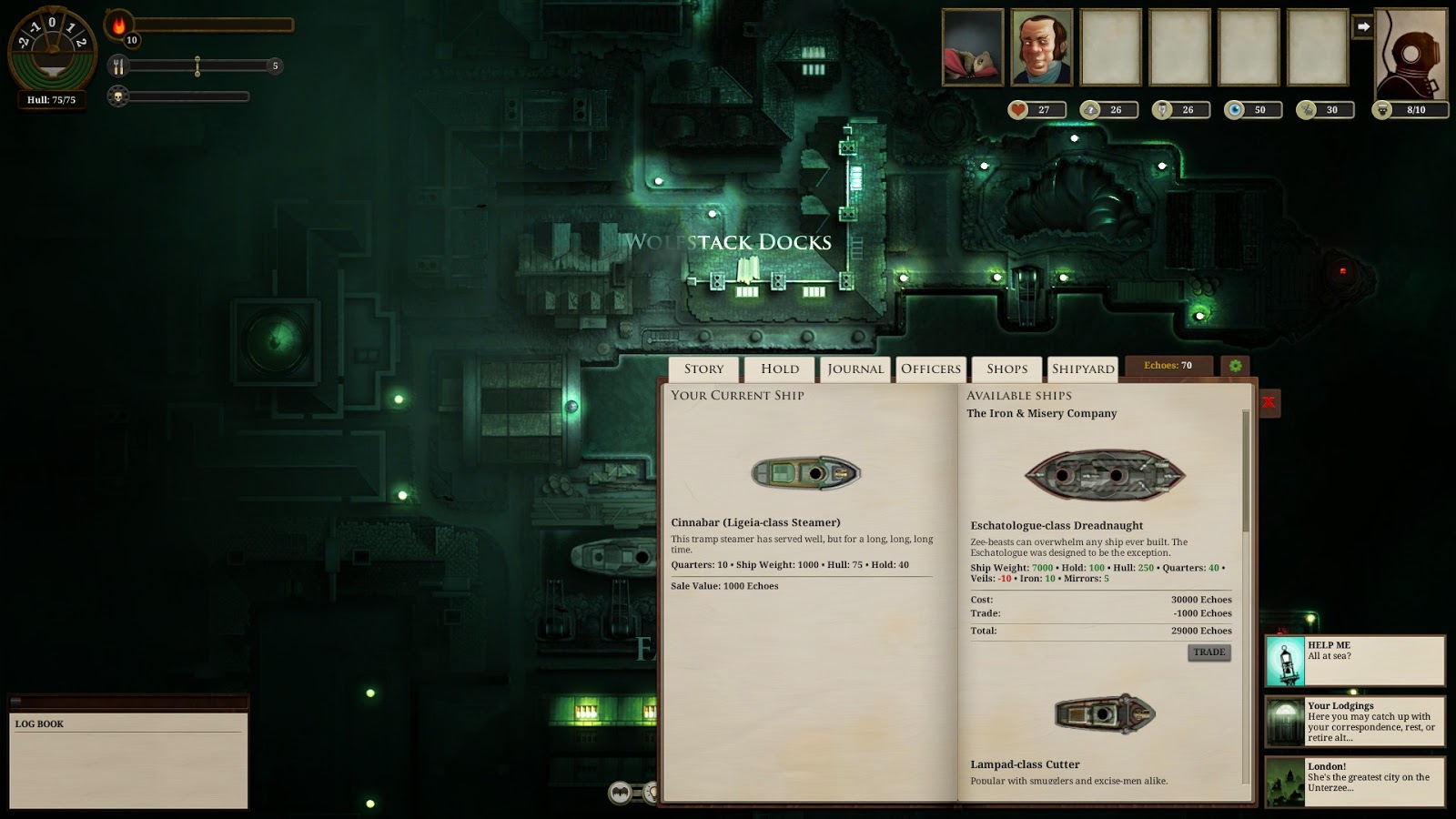 Despite finding many new places and even a few quests I find I’m still not turning a profit. The cost of fuel and food are slowly bleeding me dry despite turning a constant stream exploration reports in to the harbor master. I’m being paid a pittance and, before long, I find myself broke and out of fuel.  Maybe I’m just not used to exploration-based games, but the pacing of Sunless Sea feels awfully slow; incapable of enduring combat, and unable to continue exploring, I’m left wondering what exactly the game wants me to do. 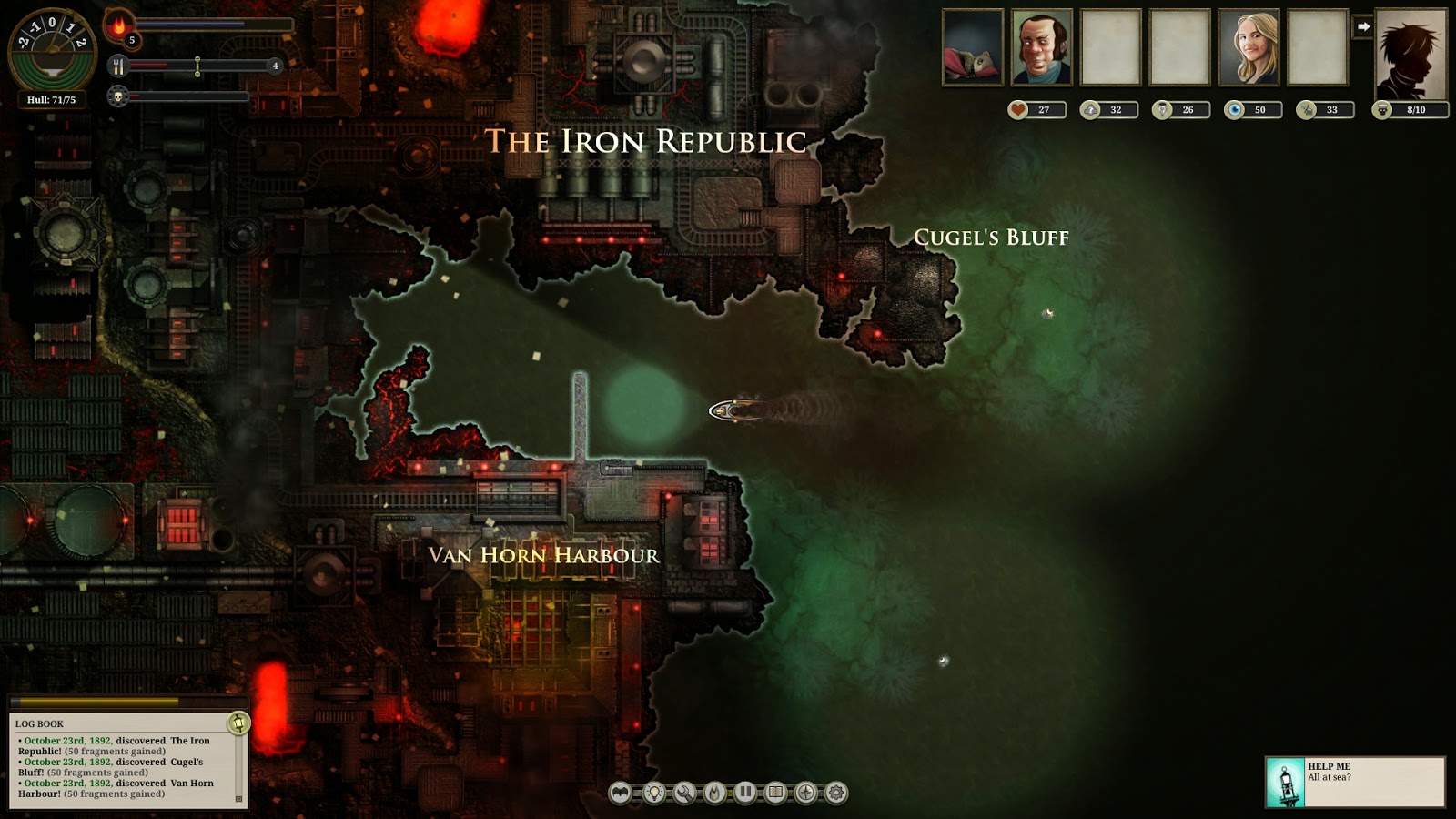 Sunless Sea bills itself as, “a non-linear, choice-heavy, personalized experience,” going on to add, “It’ll take dozens of games to explore all the sub-plots, grand arcs, alternatives, mysteries, relationships and romances in the game.” So, as with most survival games, clearly players are meant to fail to some degree, which may frustrate some folks. Fortunately for the game, after spending a significant number of hours in FTL and Don’t Starve, I’m pretty much immune to that sort of thing. Honestly though, I would appreciate it if Sunless Sea provided a bit more progression retention. That said, I do seem to manage to do a little better each time I begin a voyage, but I wonder how many players the game can retain with such a steep hill to climb. While you are constantly earning currency for simply making discoveries of new locations, it’s difficult to get deep enough into any of the sub-plots to care about solving them, and I can see several people simply giving up due to lack of tangible improvement and rewards. 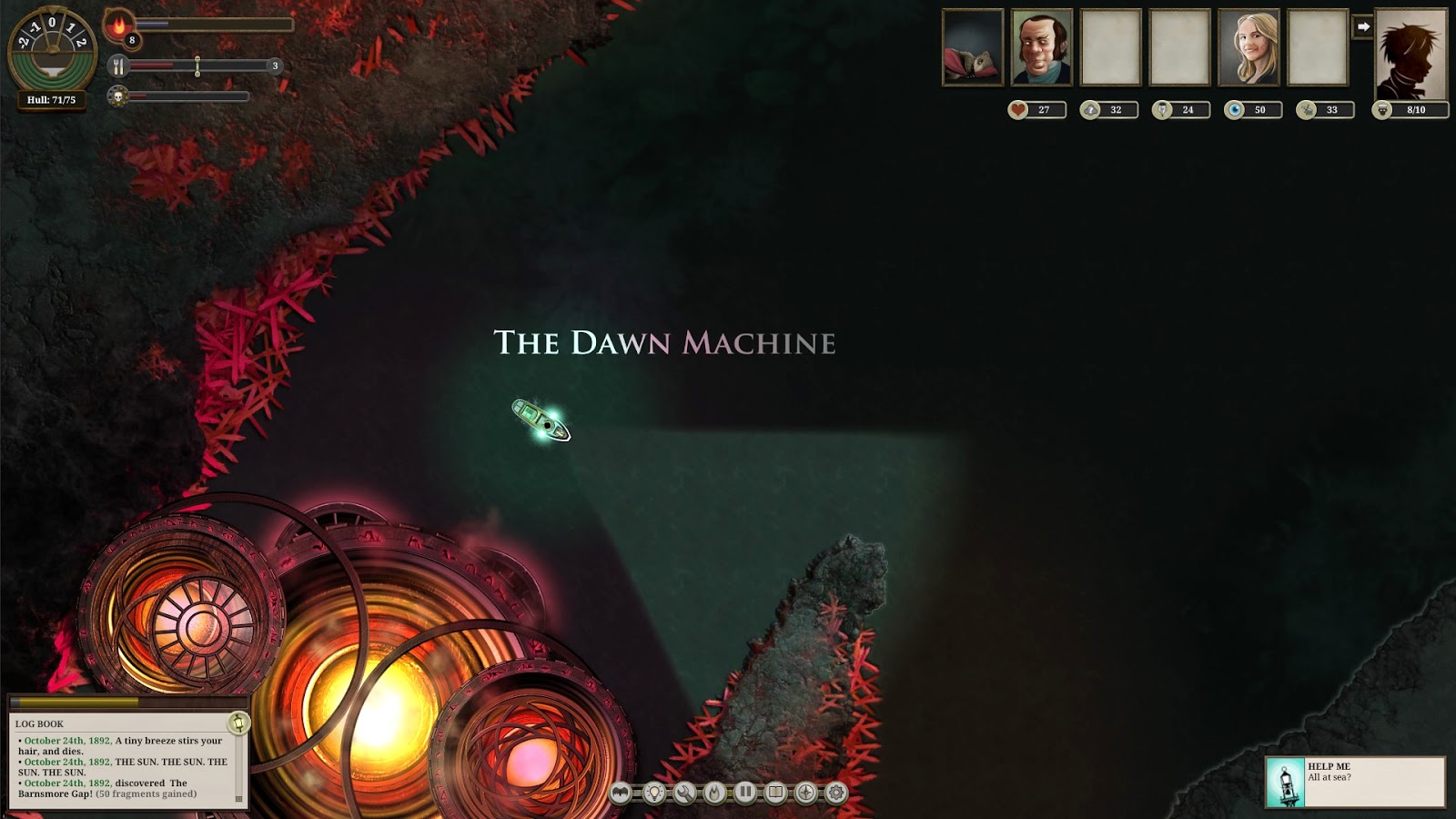 Despite being Early Access like Invisible Inc. is, Sunless Sea is currently a complete experience with fully functioning features and hours of available gameplay. Failbetter even has a “Roadmap to Completion” which displays current state of play as well as the progress on various features and content for early adopters. Personally, I don’t regret buying the early access as I’m fairly confident the final product will be well worth the money, but for others I strongly recommend waiting to pick it up during a sale (if you enjoy helping development, the developers are VERY receptive to player feedback) or waiting until the actual release of the final version (if you can’t stand bugs and bumps in the road). At the moment there are no Achievements or Steam Trading Cards due to early access, though I would expect this to eventually change. Sunless Sea is available for PC & Mac on Steam or via Failbetter's own website, currently priced at $18.99 USD.