Posted by Kel
We have another new addition to our adventuring party! Our quest to bring you guys new and engaging content has yielded Elder Gias as a contributing author. I've updated the About section of the site to provide information about all of our writers and all previous posts authored by Elder Gias will now list under the heading Gias Games. We look forward to bringing you all the nerdy content your computer or mobile device can handle!

I know that burning question you have all been pondering sleepless nights.  The question that haunts you at 3 A.M. as you stare blankly at your reflection in the mirror and ask “why?” Of course the question I refer to is, “What would it look like if M.C. Escher had traveled back in time, got drunk, and then collaborated with Edgar Allen Poe to make a video game?” Well rest easy; your answer is finally here. The Bridge is that answer.

The Bridge is an indie 4th dimensional puzzle game developed by Ty Taylor and Mario Castañeda and published by The Quantum Astrophysicists Guild. Taylor has developed and contributed to a number of lesser known games, which can be found here. Castañeda previously contributed to Towers in Space. The Bridge is the most well-known and well received game that either developer has worked on. I played the Steam version of The Bridge, though it is also available on the Xbox Marketplace. 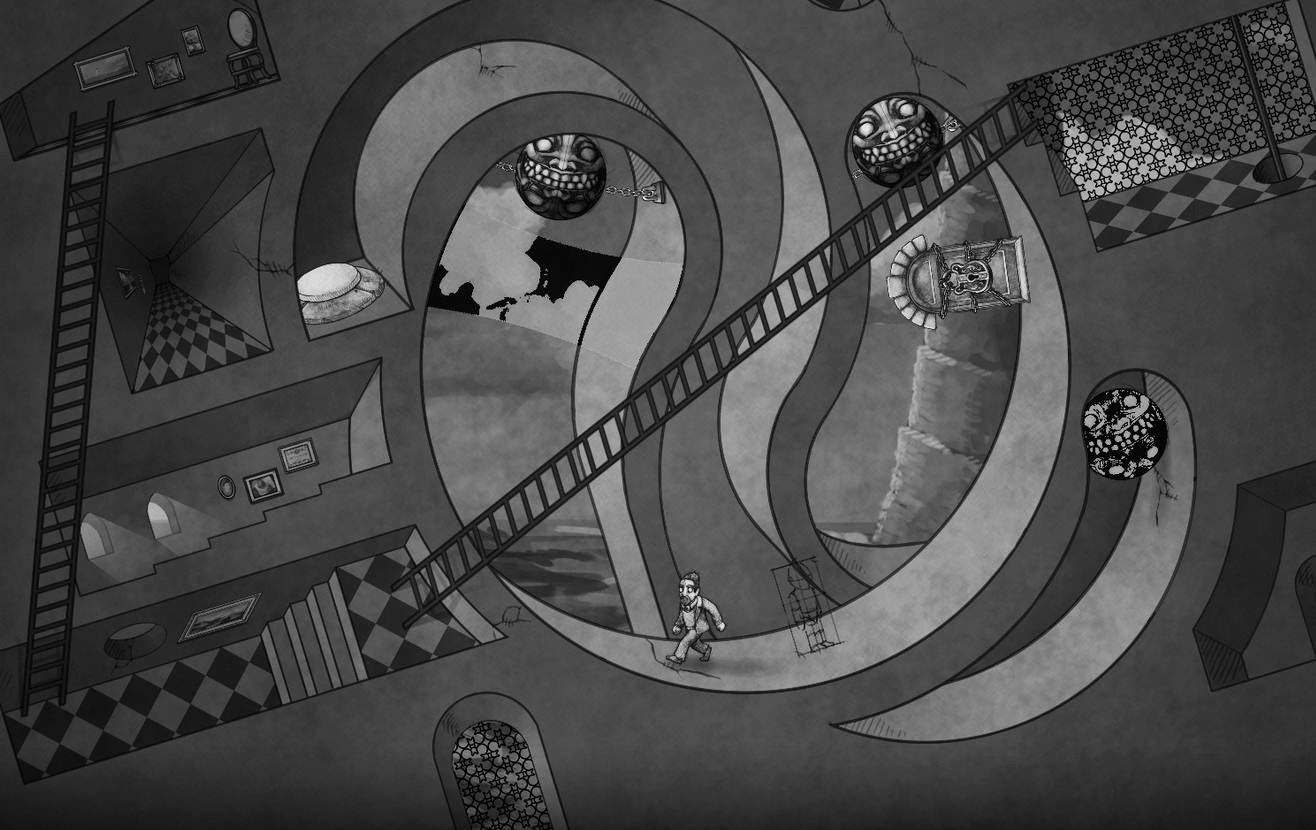 The Bridge is to puzzle games what Super Meat Boy is to platformers. It is brutally hard, unforgiving, but, at the same time, completely fair. Each level requires you to complete a series of physics-based puzzles with varying game mechanics to retrieve one or more keys and reach the exit door to the level. The farther you progress, the more exact and precise your movements will have to be to complete your objectives. The tools at your disposal are moving left or right, shifting the gravity of the world clockwise or counterclockwise, rewinding time (which you will do a lot since you will make errors often), the unique physics of your world, and your wits. It is quite impressive how many game mechanics are introduced steadily throughout the game, even into the final levels. Most games will show you their basic mechanics early in the game and save a couple more mechanics when you reach the “hard” levels about halfway through. The Bridge goes even farther by rationing out new game mechanics at steady intervals, ramping up difficulty, and saving the most complex mechanics for only the final levels.  This is an excellent move in that you are not intimately familiar with the mechanics already and have to deal with new mechanics on top of already complex difficulty. 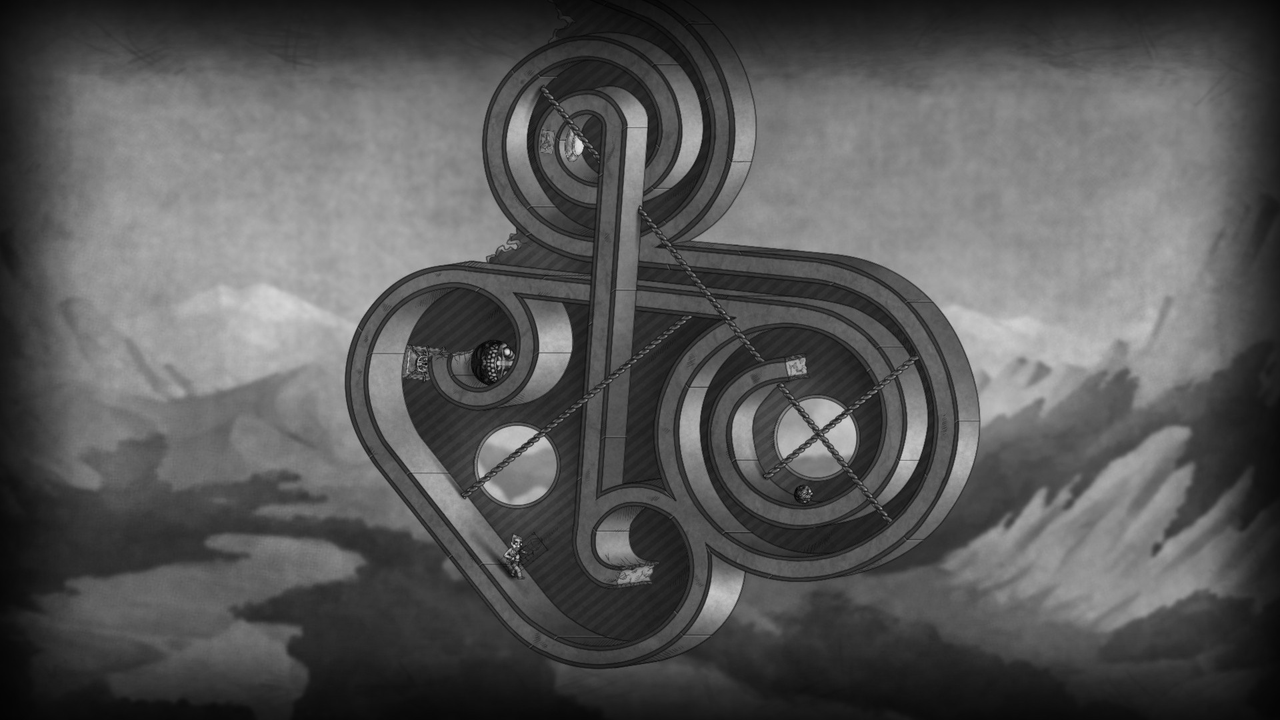 The aesthetic of the game is purely Escher, all the way down to the stylization of everything having a “pencil drawn” look to it. I love Escher and have had his posters for years, so I love the art style. The music is pleasant, but was also my biggest disappointment in terms of the game’s artistic presentation. The music was haunting and placid. I am a big fan of haunting music, especially from horror movies and games. Granted, The Bridge is not a horror game, so it should not have the same type of music as a horror game. However, good horror/eerie/surreal games use music to build tension. It is eerie and unsettling, never really building to a crescendo, but it urges you on while warning caution. The Bridge’s music does not urge you on, but rather beckons you to lie down, fall asleep, and never wake up. Again, it is not bad music, but it is just not a particularly good fit for this game. I will note that I was pleasantly surprised to find independent sound slides for both music and sound effects in the sound options menu and that the game natively defaults to Borderless Windowed, which is my preferred method of play with a multi-monitor setup.

My biggest complaint with The Bridge is the brutal difficulty of the puzzles. Let me say that I love puzzles of all sorts. I love logic games and logic puzzles (Knights and Knaves anyone?) and I love adventure games with focuses on problem solving (when done well like The Dig). I even love extra-dimensional physics; I used to draw tesseracts and other nth dimensional objects for fun when I got bored in my CAD/math hybrid classes back in high school. But if you are familiar with puzzle sections in video games, you know just how frustrating it can be to get stuck on a puzzle and not be able to move forward. This game is that experience over and over. If you are the type of person to love that, then this is the right game for you, and there are plenty of people who do love that; I just do not happen to be one of them. That is not a knock against the game itself: it does what it does wonderfully and this is simply a matter of personal preference. 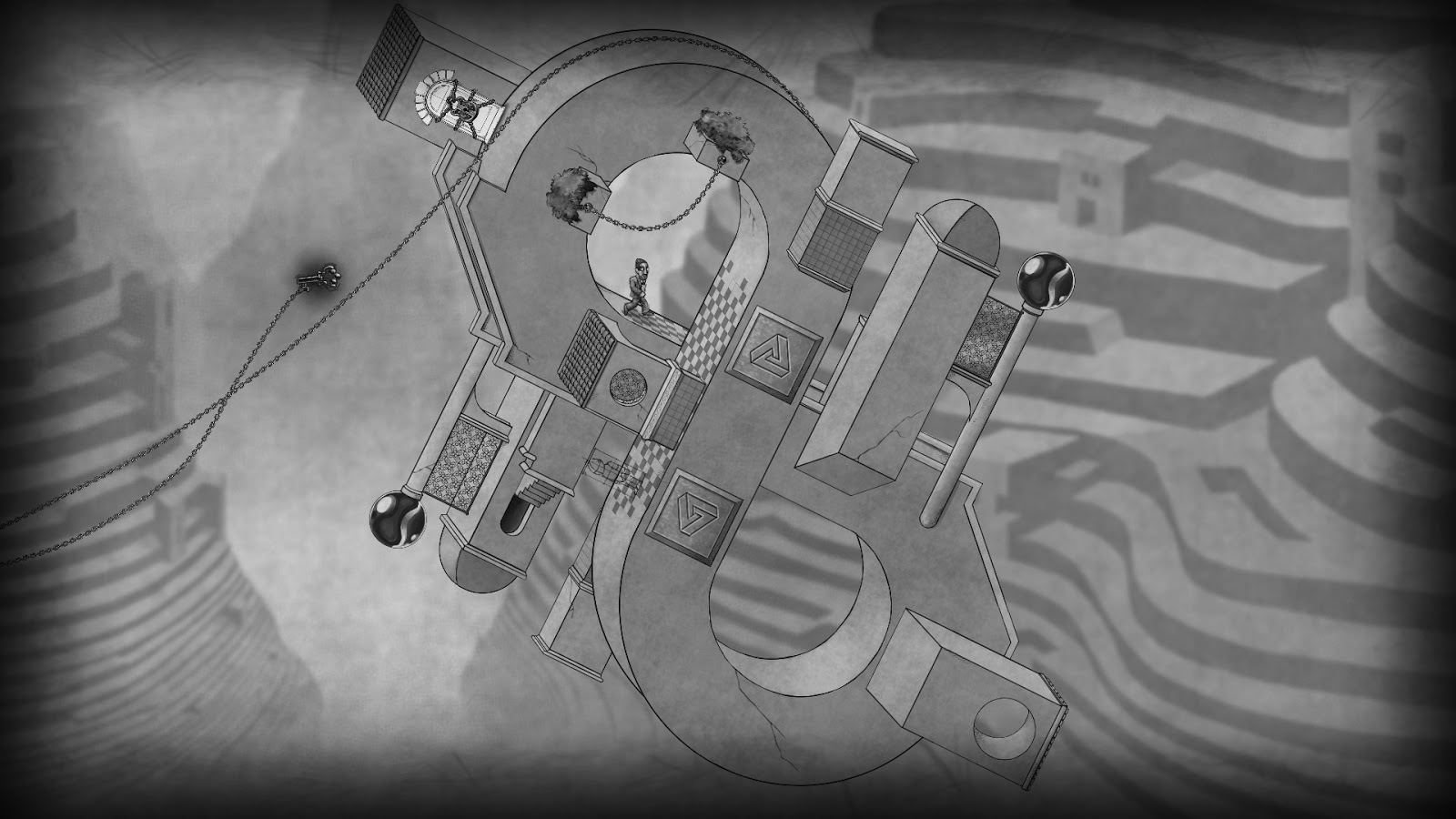 There are two sections two the game. There are chapters I-IV with several levels per chapter. Then there are “Mirror” chapters with “Mirror” levels, which take the basic chapter and levels and make them significantly more difficult. I managed to get through all the basic levels by myself, and even managed to get through a couple levels in the “Mirror” world. However, before the end of the first “Mirror” chapter the game became so brutally hard that I had to seek outside resources. I wasn’t in love with the game at this point, so I turned to a walkthrough to help me solve the puzzles I could not figure out on my own. I also needed a guide to help me find the “wisps” collectables hidden throughout the game. I suggest any person playing The Bridge use a guide to find the “wisps”, as finding them on your own is nigh impossible. Seriously, the level of insanity they went to in order to hide those collectables is beyond all manner of gaming reason.

The Bridge sells for $9.99 on Steam and Xbox Marketplace.  It takes 2 hours of game time to get the 4 steam cards the game has to offer. It takes 4 hours to finish the game if you are a master of puzzles, but, more realistically, you are looking at about 5.5 hours to reach the end. Add an additional two hours to be a completionist. In total, about 7.5 hours of gameplay for $9.99 is a good ratio, totaling $1.33/per hour of game play. The game has 20 achievements, one of which is unrealistically difficult without the use of a game guide.

Recommendation: Medium – If you are a serious fan of brutally hard physics puzzles and trying to wrap your mind around Escher paintings, then you should like this game. I love brain teasers, logic problems, and puzzles, but this game just did not grab me. It is a solid game, well built, and clearly heavily tested to make sure that all the puzzles are perfect, requiring very exacting movements to solve them. I believe love of this game is going to be much more subjective than most other puzzle games. At $10, it just barely offered me the enjoyment to meet that cost, but mileage will vary. I would urge buyers to wait to get it till at least 50% off ($5) which is probably the sweet spot for this game.  When it is eventually $2.50 during a steam sale or if it is part of another Humble Bundle (recently part of Humble Bundle 12) or Indie Gala bundle then it would be most appealing.