An Evening with the Game Maker's Guild

Posted by Kel
The clock in my phone somehow still reads 6:58, leaving an awkward gap of 17 minutes between now and when I’d promised to arrive at the Cambridge Innovation Center. Staring out at the Center through the windows of the café that was serving as my temporary base of operations, I felt an anxious heat stir in my stomach. It’s ridiculous but true. The premise of meeting a group of new people unfailingly conjures something between pre-convention and first-day-of-school style sensations in me and being stuck with 17…no, 16 minutes to ruminate on this doesn’t help in the slightest.

Email provides a welcome refocusing point as my phone alerts me to the fact that 5 people have posted to the Game Maker’s Guild online forum, each listing the specs for the game(s) they will be bringing to tonight’s meeting. I add to my notes for the evening, trying to be as prepared as possible by building a reference doc that associates the names of the games with those of their creators. All the games sound intriguing and anxiety quickly gives way to the desire to play.
Impatience gets the best of me and I cross Mass Ave to enter the glass-and-stainless-steel lobby of the Innovation Center. The source of my invitation for the evening’s events, Jeff of Pair of Jacks Games, is waiting for me and greets me with an energetic handshake. As we ride the elevator up to the meeting area, he speaks animatedly of the Guild and provides me with a brief overview of the organization.
The Game Maker’s Guild is a collective of board game enthusiasts who meet regularly and work collaboratively towards the singular goal of creating better board games (and the occasional RPG). Their ranks are comprised of both ardent hobbyists and developers hoping to transform their ideas into a viable, playable, sellable game, though the distinction is far from mutually exclusive. The Guild provides its members not only with the opportunity to share and playtest games, but also serves as a distributor of various intangible resources that can often go unremarked upon by would-be game makers. An example of the latter is a series of guest lecturers that present to the Guild on subjects ranging from what a designer should expect from working with an artist to the various legal considerations a designer should make in order to protect their intellectual property. Given the various difficulties that developers have described over the course of many Board Game Hours I've been privy to, it's not hard to imagine that these resources must go a long way in helping provide guidance on the often circuitous path to making a game. 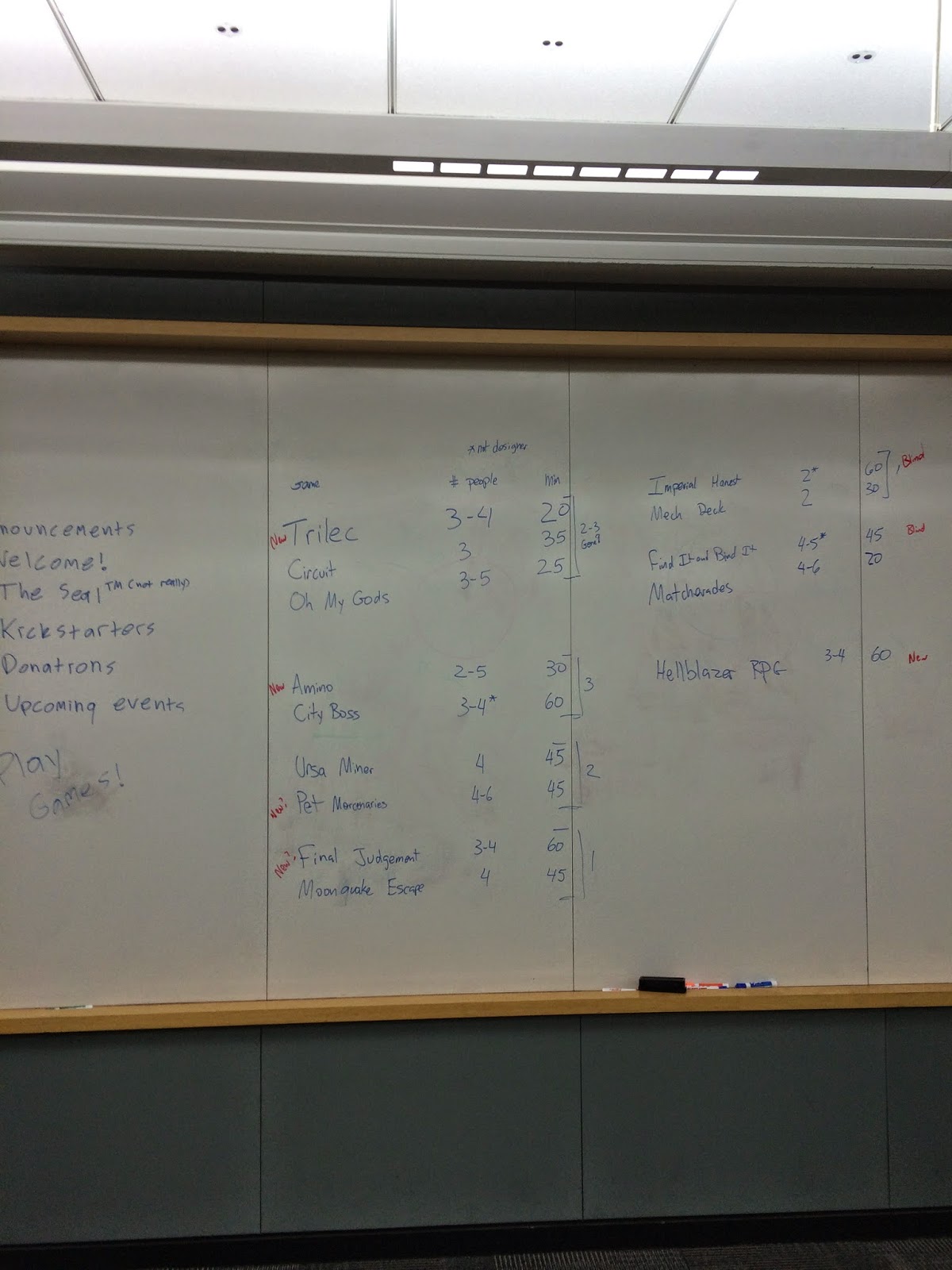 The Guild gathers in one of the Innovation Center’s many enclaves designed for corporate meetings. Upon entering, we’re faced with a wall-encompassing white board that already features a full listing of the games being presented along with the number of players required for each and the approximate amount of time needed to play. For a handful of titles, there are small notations in addition to the basic specs. I learn only a few minutes later during an introduction to the playtesting that the notes are meant to call attention to those projects that are attempting to get the Guild’s Seal of Approval.

One of the many overarching functions of these playtesting events is to provide an opportunity for Guild members to move through a portion of a four-stage curation process with the end goal of said process being the awarding of the Guild’s Seal of Approval. Part of the requirements to receive the Seal involves both intensive and blind playtesting, the latter of which being feasible during the night’s events. Though it was apparent that some Guild members were leveraging the Seal-obtaining process as part of a lead-up to launching a crowdfunding endeavor and, ostensibly, some form of publication, other developers seemed to be using it as a literal embodiment of the Guild’s creed, even if the resulting games never see play time beyond Guild meetups.


Time is of the essence and formal introductions are carried out at speed. We’re here to play and the collective gaming itch that’s being given off from those in attendance is damned near palpable. The sensation is deeply familiar, like returning home after a prolonged absence, and I find myself unconsciously recalling my first trip to Gen Con.

Playtesters are quickly matched to a couplet of games, seats are rearranged, and the playing begins in earnest. I turn my attention to Jeff in order to get down to one of the purposes of my visit: to play a full round of Moonquake Escape. If that title sounds familiar, that might be due to the game's appearance in our round-up of Boston FIG. Jeff was submitting the game to our Playtesting Lab to obtain additional feedback. Before entrusting me with the game, Jeff provided a full tutorial for myself and three other attendees.

After escaping from our lunar prison and providing Jeff with initial impressions, we turned to the second game in our assigned couplet: a brand new title called Final Judgement from Dennis Chan, the maker of BioQuest. The game was pleasantly minimialistic (derived in part because Dennis had only recently finalized the concept and mechanics) and it was not at all short on fun or replayability. Essentially classic game theory with a smattering of Cards Against Humanity, Final Judgement renders the fate of the world through as many as seven rounds of clandestine and potentially unscrupulous player dealings. It was fast, amusing, and left us players eager for more.

Providing feedback to Dennis in the afterglow of a few rounds of Final Judgement seemed like a privilege and was fascinating to observe. Each player took turns speaking and each seemed to fall into a praise-suggestion-question-praise cadence. Given that all the other players were themselves game developers, each was able to offer insight not only on tweaks to the game, but how the title could be published and marketed. Dennis took diligent notes throughout, then thanked us all. It was an efficient exchange that managed to be both professional and very friendly, just the sort of environment you'd want if you were trying to make your ideas into a distributable reality.

All too soon the evening is over and I'm headed back to the T with Moonquake Escape tucked carefully into a paper bag. As we bid good night to one another I lament that I wasn't able to play more. The Game Maker's Guild has put considerable time and effort into creating a welcoming, productive space where innovation can potentially meet industry. I promise my host and fellow players that I will return for another playtesting meeting and, though I'm not sure exactly what date that will be, I'm already looking forward to it.

Update: As of January 2015, The Care and Feeding of Nerds is an official sponsor and media partner of the Game Makers Guild!