Ok guys, I think something may legitimately be amiss, but in the best possible way (if that even makes sense). As this is my first foray into the realms of GMing, I'm honestly only partially sure of what to expect. My players are just about done rolling up their characters and the developmental momentum stemming from these new personae is reaching a critical mass. As each person conceptualizes, then latches on to, their character their excitement goes from personalized to palpable. It's that beautiful mélange of creation and that 'A Ha' moment when previously disparate ideas finally meld together, and it seems to be at least semi-infectious. This crystallization of thoughts is effectively spurring me to write which, as we discussed last week, is a powerful thing in itself. Now I'm awash in the compulsion to write-all-the-things, almost to the exclusion of pretty much everything else. While this makes for an excellent distraction at the gym or during the morning commute, the fervor seems to be making me just as antsy as my players! There's a bit of work that remains to be done before the dice can fall, but it's been an awesome experience thus far.

In the interim, as I get all my adventuring ducks in a row, the summer continues to blaze along in a series of heat waves and thunderstorms. As the season progresses, you may find yourself heading to a number of conventions, barbeques, birthday parties, reunions, and other types of get-togethers. There may be travel (and corresponding long periods spent waiting around) involved, cousins you haven't seen since your Xbox 360 was fresh from its packaging, or simply the opportunity to spend some time with your friends. Any and all of these are excellent conditions to deploy a party game.

Ah, but what, exactly, makes for a good party game? Aside from preserving your nerd cred, you want to make sure that any gaming recommendations you make to your nearest and dearest don't have the latter wondering why on Earth you thought your game would be fun. Nobody wants to be that guy straining under his/her desperately manufactured enthusiasm in a fruitless attempt to keep a game going when the players would clearly rather sleep, drink, or…say…watch lichen form.

Fear not, for you will avoid such a humiliating fate if you look for the following hallmarks of an excellent party game:

It can easily accommodate a large number of players and/or a malleable player pool.

You never want anyone to feel excluded or crowded out. Moreover, informal gatherings tend to have several activities occurring simultaneously, so it's nice if players don't feel pressured to stay and can easily 'tag out' and surrender their spot to someone else without interrupting the flow of play.

All the rules can be explained in 3 minutes/deduced from watching a couple rounds of play.

A corollary from the first point; if the player pool is dynamic, it's imperative that individuals can readily pick up the mechanics of the game very quickly. Nothing kills game momentum faster than having to constantly stop-start play in order to go over the rules.

The game doesn't cater to a specific skill set.

Unless you're at a convention or another event at which it's likely you'll be surrounded by like-minded individuals, you want to recommend a game that appeals to the widest pool of potential players in order to foster an air of enthusiasm about playing and prevent any unintentional exclusions.

Actual gameplay is competitive without being incendiary.

A healthy desire to want to do well in the game keeps people interested, but keeping things cordial is generally a good idea in terms of the overall event you're attending. An easy way to accomplish this is to select games that have a mechanic based in theatricality. This doesn't necessarily have to involve players actively performing, but rather that the enjoyment from play stems from each player's creative contributions to the group rather than the number of points garnered. One of the reasons why Cards Against Humanity is so appealing is that players are more interested in, and are more likely to remember, making/listening to especially hilarious entries than in being the overall winner.

The physical game is highly portable.

Whether you're waiting in an airport or are at Uncle Xizor's annual barbeque, it's often beneficial to be able to set up, put away, and store your game quickly and efficiently. Not only does this help ensure you don't lose the interest of potential players during set up, but it drastically lessens the probability of losing critical components as the game is put away/stored/toted through security.

So, now that we know what to look for, what are some games that exhibit these qualities?

Cards Against Humanity
Can Accommodate an Absurd Number of Players, ages 17+ 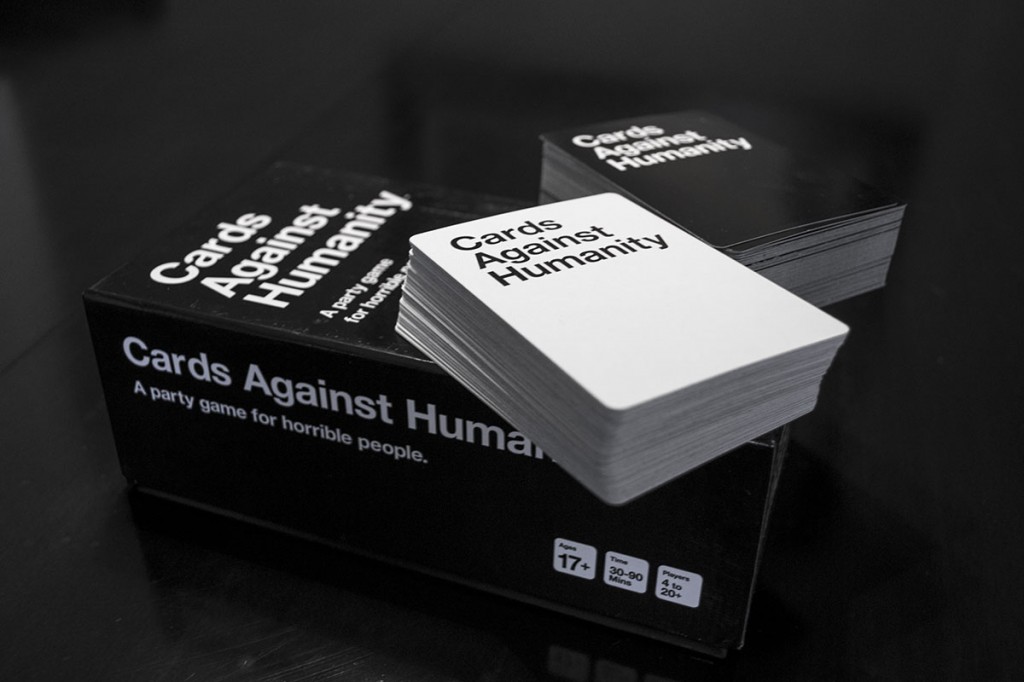 The phenomenon we know and love, Cards Against Humanity is minimal on components, maximal on hilarity. Every player draws a hand of white cards, each featuring a potential response to a question posed on a single black card. The question is asked of the group and everyone attempts to formulate the funniest answer with their white cards. The holder of the black card (a position that rotates around the group of players) picks the response that he/she feels is the most amusing. The selected contributor then gets the black card as a trophy. The person with the most black cards after everyone in the group has had the opportunity to pose black card questions to the group is the winner but, as noted above, no one particularly cares about who ends up winning. The game is no larger or more complicated than a standard deck of playing cards, affording it maximum portability. Bonus: you can download the game for free! 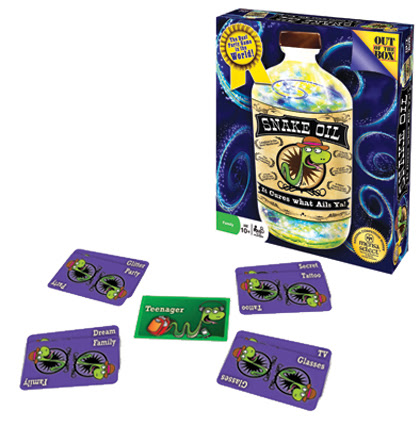 A fairly new creation by Out-of-the-Box Publishing, Snake Oil puts you in the role of a fast-talking salesman of some…less-than-legitimate items. Players draw a hand of six cards, with each card featuring a noun. Each player then attempts to combine two of the nouns on his/her card to create a novel product, which is then pitched to one player who acts as the potential consumer of said goods. The 'customer' listens to all the pitches, then selects the one he/she will buy. The player who has the most products selected for purchase after each individual has had at least 1 opportunity to be the customer is the winner. The game is entirely self-contained in its box and is extremely portable.

We Didn't Playtest This At All (Sponsored Content)
2-15 "Fun-Seeking" Players, ages 13+

From our friends over at Asmadi Games, this very aptly named game actually hinges on the exact opposite of one of our Ideal Party Game characteristics from above (sort of). The idea here is to win by any of the means provided you on the cards that comprise your hand. Each card has unique, amusing instructions as to its application, allowing for minimal time spent explaining the rules. Rounds of play are extremely fast, sometimes less than a minute a piece, and the game itself is approximately the same size as a deck of standard playing cards. 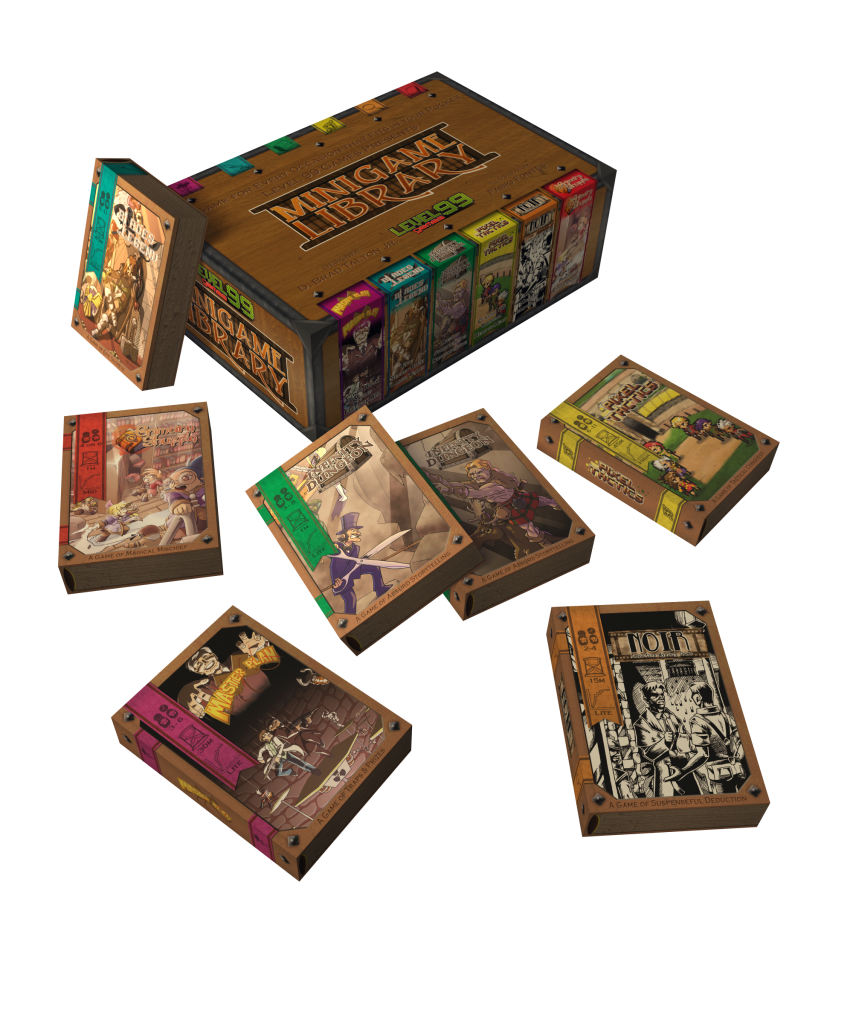 This Kickstarter-backed offering from Level 99 Games is fairly ingenious and was designed explicitly to be as portable as possible. The Library itself is not one, not two, but six individual games that are each easy to learn, but tricky to master. Furthermore, though each game can be easily stored in a pocket, all six games can be stowed in the brilliantly efficient Library chest, which itself is smaller than a typical game box. Most games have an average playtime of 20-45 minutes but some titles, like Infinity Dungeon, can span several hours if you have a large group inclined to detailed storytelling.


Best wishes for a wonderful holiday week if you're reading from Canada or the United States and many hours of happy gaming to everyone!