Greetings readers! And welcome back to all those who've been able to get out to one of the many conventions that went down in the past weekend or two (including the inaugural PAX Australia!). Not gonna lie guys, I'm very much living vicariously through all of you during this con-filled part of the year. Don't get me wrong, our wintertime sojourn overseas was all sorts of amazing, but now, with Gen Con less than three weeks away, the notion that I'll miss it this year is acutely bittersweet. Ah, sigh.

As mentioned a few days ago, this summer has been frankly Hades-esque in terms of ambient heat and humidity. Mercifully enough, we're in the midst of a brief reprieve at the moment and can do things like eat warm food or walk about without breaking into sweat. It's wonderful but, as it's still July, is almost certainly not going to last. Given this, the fact that we're still in the prime of barbeque season, and that there hasn't been a new recipe on the site for a little while, it seemed like some warm-weather noms were in order.

This recipe is a guaranteed crowd pleaser and an ideal side dish. It's flavorful, colorful, easy to transport and even simpler to put together. The most difficult aspect of this salad is literally just remembering to put together the dressing the night before and set aside for use the next day. Aside from that, and some smashing of Ramen noodles, it's just a matter of tossing the ingredients together and being on your merry nomming way. 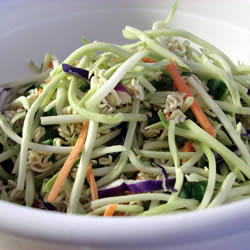 Required Equipment: A large serving bowl, a smaller metal or glass bowl for the dressing, a whisk, salad tongs, a medium sized plastic bag with a top that can be zipped or sealed closed, plastic wrap.
Optional Equipment: A sharp knife (if you're making your own slaw), a mallet to break up the Ramen

Step 0: Remove the flavor packets from the two packages of Ramen noodles, then place the noodles themselves into your plastic bag and seal the bag.

Step 1: At least 12 hours before serving the salad, combine all the ingredients for the Dressing in any order that you choose in your small metal/glass bowl. After combining, whisk the Dressing ingredients together until the mixture is as uniform as possible. Once this is done, cover the bowl with plastic wrap and leave it in your refrigerator. 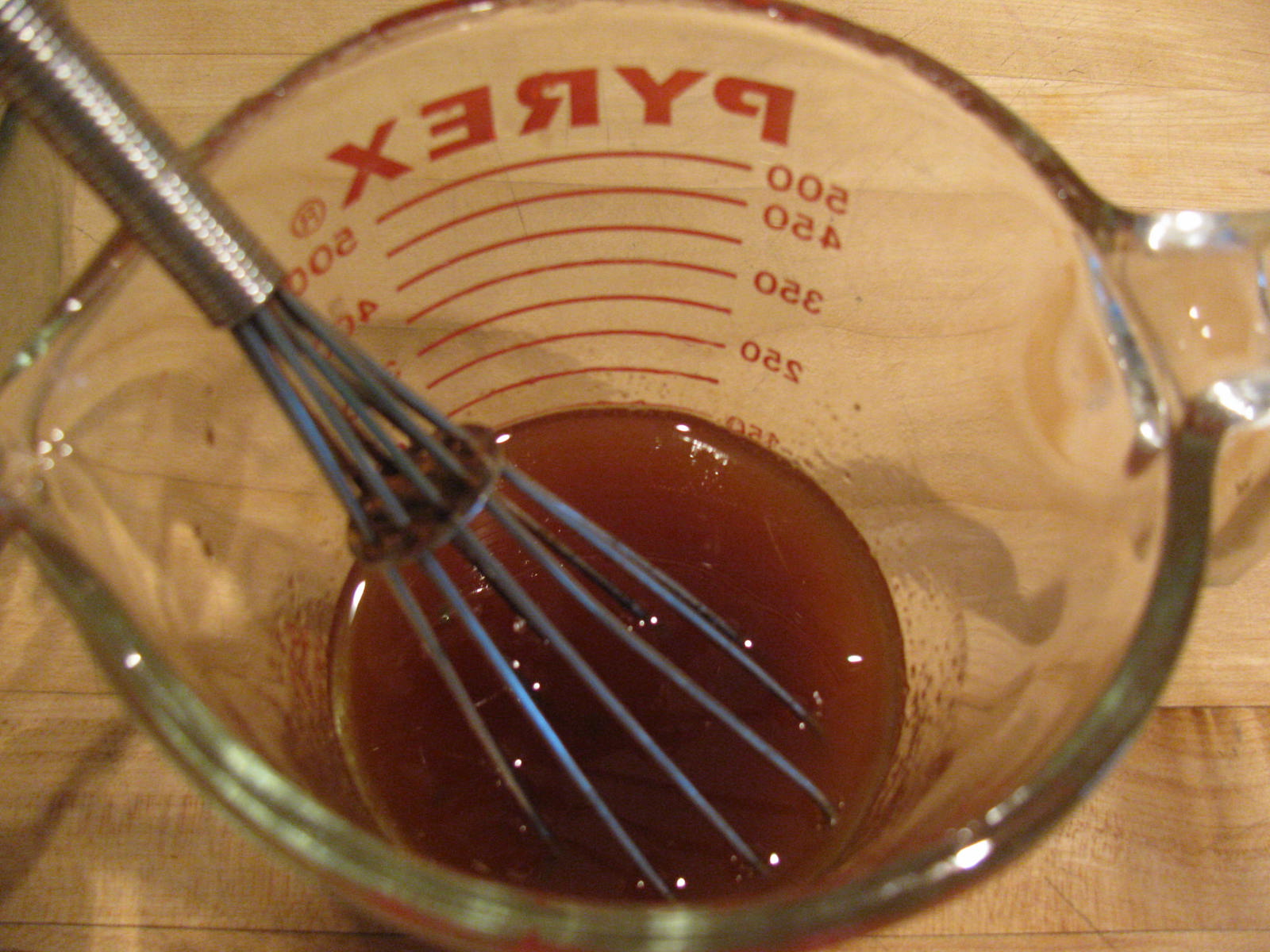 Step 2: Just before you'd like to assemble the salad, crush the Ramen noodles (I do this with a meat tenderizing mallet while the noodles are still in the sealed bag). Wash your scallions, pat them dry, then chop them horizontally into small pieces.

Step 3: Combine the components of the Salad in your large bowl, including the scallions and crushed Ramen noodles.

Step 4: Remove the Dressing from your refrigerator; it will almost certainly have settled and stratified during the night. Whisk the Dressing until it's uniform again (this may take a little longer than in Step 1 as the ingredients have probably stiffened in the cold), then drizzle it over the Salad.

Step 5: Using your tongs, fold the now combined Salad and Dressing until the two are well mixed. Serve and enjoy! 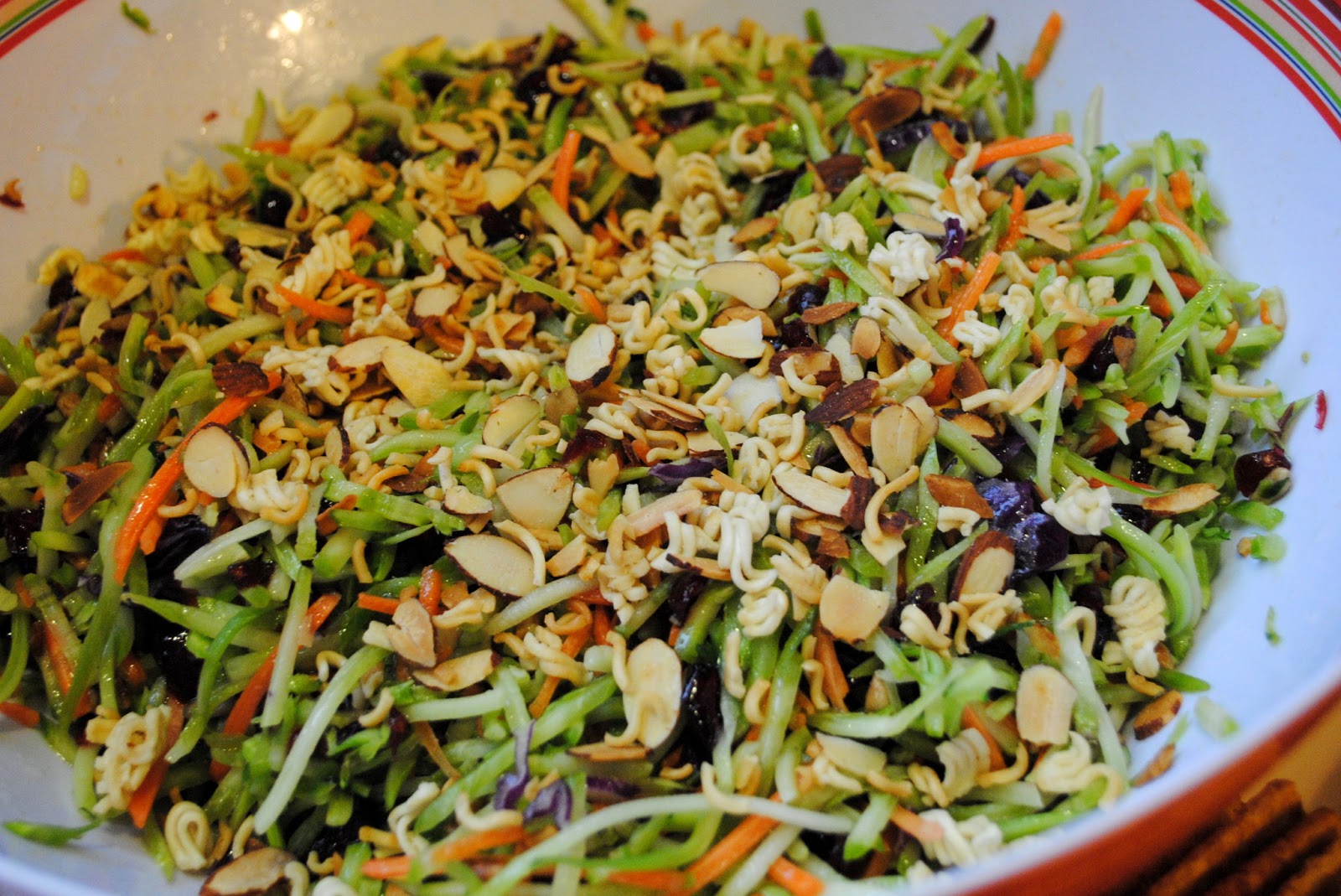 Ok, the ingredients, particularly those for the Dressing, are super nondescript. Can we get some details on those?

Honestly, this recipe is incredibly flexible and lends itself to all sorts of experimenting (mini mad scientist laugh). For the Dressing, I tend to use a blend of balsamic and apple cider vinegar, granulated white sugar, cold-pressed canola oil, and packets from beef-flavored Ramen. Very astringent vinegars, like white vinegar, don't usually work as well as more robust vinegar varieties like red wine, champagne, balsamic or apple cider. You can also use brown sugar, honey, or agave syrup in place of granulated white sugar. Also, just about any flavor of Ramen will work in this recipe.

I can't find Mann's Broccoli Slaw anywhere. Are there any good substitutes?

Green Giant makes a similar version; Dole does as well. Also, lots of grocery stores sell generic versions (which are often cheaper and of comparable quality). You can usually find these in the produce section of your local supermarket alongside prepared vegetables. If there are no generics to be had, you can make your own slaw by julienning the stems of broccoli bunches, carrots, snow peas and tossing some purple cabbage into the mix for good measure.

What's with keeping the dressing separate for so long? Why not just make the whole shebang in advance?

Here's the thing, the moment you combine the Dressing with the rest of the Salad, the latter will start to lose its crispy, crunchy goodness. Unless mushy is the texture you're aiming for, you'll probably want to avoid this. Similarly, you'll want to keep the Salad away from high heat. It'll hold up fine over the course of a run-of-the-mill barbeque, but will wilt rapidly in direct sunlight or if stored in extreme heat.


Best of luck with your culinary experimenting!