The second half of July is usually a pretty fine time to be a nerd/geek. By this point in the month convention season is in full swing and suddenly we're awash with things to look forward to for the rest of the year. Add to this the much-anticipated Steam Summer Sale and a cavalcade of summer blockbuster movie releases and you may quickly find yourself giddily suffused in All The Things and perhaps marginally aware that you're a bit lighter in the wallet (curse you Summer Sale!).

I return to you from my quarterly battle with the Elder Hydra mostly unscathed and eager to report on an epic confrontation of another sort. It was mentioned a bit earlier on in the year, but last night I was able to actually partake of Guillermo del Toro's Pacific Rim.

How was it? Short version: It was the most fun I've had at the movies since The Avengers.

Not-so-short version: Were you born between 1979 and 1985? Did you, at any point, have a favorite Power Ranger? Is the Universal Century a legitimate epoch marker? Does the phrase "Shut up Shinji" mean anything to you?

If you answered 'yes' to any of the above then you're probably already inclined to like this movie. Even if none of the above questions applied or made sense, there's still plenty to love about this film so long as you have the right mindset as you approach it. If you go into the theater with the expectation that this will be a lot of action and a lot of disregard for basic physics then the odds are that you'll probably come away from the movie having had a good experience. This is not a treatise on scientific feasibility; this is an encapsulation of all the best parts of a summertime popcorn flick.

This is not to say that the movie is egregiously shallow. Transformers this is not. Aside from lavish visuals and compelling combat sequences, Pacific Rim boasts a both a very competent cast and a stirring score, the latter being brought to you by Ramin Djawadi, who also composed for Iron Man and Game of Thrones. Supporting all this is a distinct, palpable adoration that del Toro clearly has for the mecha genre. The film is less an homage and more a legitimate attempt to modernize and reintroduce the notion of giant weaponized robots to the public's purview. It's everything your favorite Saturday morning cartoons wished they'd grow up to be. 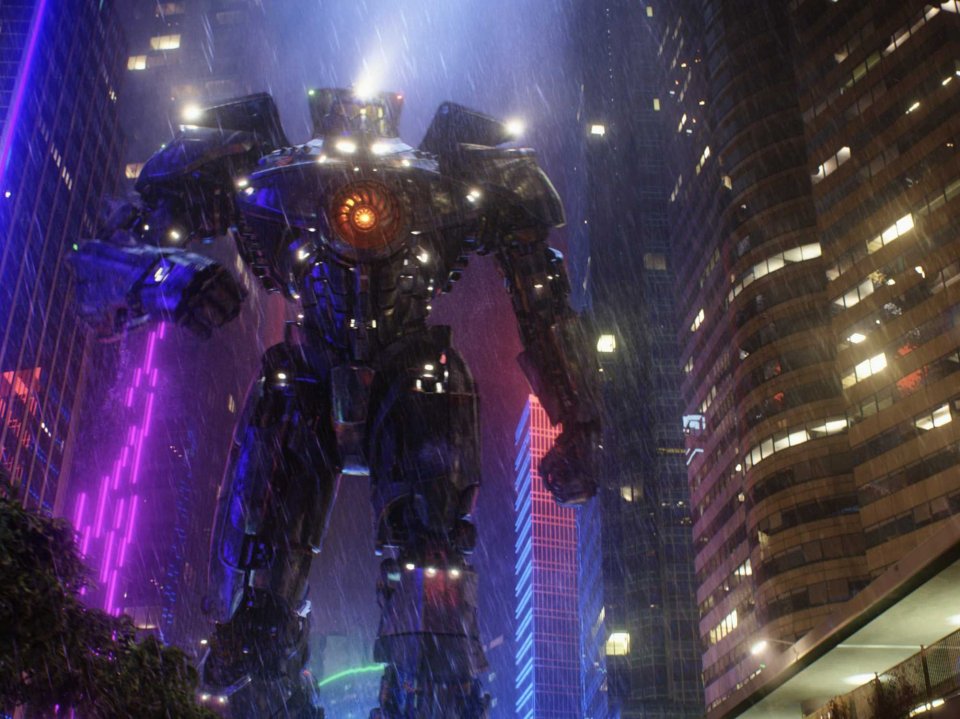 The film gets a blistering start off the blocks, peppering the audience with a synopsis of the disturbing events that shape the near future (the first of which taking place later this year). A cleft in the tectonic plates deep beneath the Pacific Ocean is the foundation for a dimensional rift that occasionally spews forth enormous hostile beasts, the mythic kaiju. These gargantuan creatures make a habit of coming to shore near major coastal cities and ravaging the surrounding urban area. After a brief period of panic, humanity bands together to offer a mechanical rejoinder: the Jaeger. Standing eye-to-ehm...visor-windshield amongst the skyscrapers they aim to protect, the Jaegers give their otherworldly counterparts a run for their money. For a while at least. But the kaiju aren't so easily cowed. Some seven years after their first appearance before mankind, they have evolved to such a degree that the Jaegers are no longer wholly effective against them. Unwilling to provide a continual stream of resources to potential failure, the governments of the globe withdraw from the project that brought the Jaegers to 'life'.

At first glance, the nebulous of main characters appears thin and formulaic. You've got your washed up ex-ace pilot who's oh-so-talented but traumatized and unsure of himself. There's the unyielding, consummately selfless commanding officer. You've got the insufferably cocky but skilled counterpoint to our earthy, emotionally broken protagonist and the good old guy trying to keep the former in line. The lab is populated by the wannabe hip, eccentric fanboy and his straight-laced foil as the scientific noncombatants. Finally, there's the sidelined prodigy eager to prove herself and avenge the demons of her past. They all seem trite, like the price you'd pay for this kind of action movie, but there's actually a bit more to them than meets the eye. Each character is not only meant to be an active tribute to their counterparts within the mecha genre, but a sampling of humanity as a whole. Considering the dark subject matter, the movie is surprisingly humanistic and, despite our obvious shortcomings (there's a brief mention that anthropomorphic climate change provided ideal conditions for the invading kaiju), optimistic about our capabilities as a species.

Additionally, Pacific Rim is refreshingly non-Amerocentric, as the majority of the main characters hail from Australia or Japan and the lion's share of the action takes place in Hong Kong. It's extremely clear that this issue directly affects the entire oceanic region and the film tries to see that all countries in the monstrous blast zone get some sort of representation. It would have been nice to see even more diversity, as Southeast Asia and Polynesia got little-to-no screen time, but the movie did make a notable effort.

Idris Elba steps out from under Heimdall's helm to give an unquestionably commanding performance, but it is Academy Award nominee Rinko Kikuchi who effectively steals the show as Jaeger co-pilot Mako Mori. With her blue-streaked pixie cut hair, she exudes the flawed, determined, hyper-capable essence of Rei Ayanami. While she is, ostensibly, a love interest to the protagonist, Raleigh Becket (Charlie Hunnam), the amorous aspect of their attraction is decidedly secondary to their overarching psychic/emotional connection. The latter is requisite for co-pilots of Jaegers, who operate the mechanical giants via technologically-enabled psychic link in order to share the incredible neural load that piloting entails. Moreover, any sexualization in the film is superficial and parceled out equally amongst both genders.

The movie moves at a breakneck pace for the majority of its run time, making it feel like the shortest 2 hours and 11 minutes of your life. There are a few slow and bumpy bits, but del Toro is aware that the relentless pace is part of the experience and these moments are short lived. The ending is predictable, the handful of attempts to weave actual science into the mix are clumsy, and Ron Perlman feels somewhat out of place, but none of these detract overly much from your viewing pleasure. For each qualm there is at least one moment wherein you'll want to bust out into applause (which several people did more than once during our screening).

It is certainly not a perfect film, but Pacific Rim delivers soundly on its premise. So long as you keep this in mind, you won't likely be disappointed. By the end you'll be cheering and potentially amazed by the huge grin on your face. It's the perfect way to escape into nostalgia and anime-fueled fantasy...or just escape from the heat for a few hours.