Holy Mother of Dragons! It's already Sunday again? What continuum-warping sorcery is this? I'm not sure if it's a function of the season or the aging process that makes this portion of the year seem to follow that whole time-passing-as-a-series-of-Lorenz-transformations phenomenon we talked about last summer. In any case, we're somehow on the cusp of August and, one week from today, I'll be GMing my very first RPG! It's not going to fill the gaping chasm left by the distinct lack of Gen Con this year, but it's very exciting nonetheless.

The sheer quantity of goings on probably played no small role in the pace at which this week flew by. So, without further ado, the week in Geekdom.

As a tribute to the final season of Futurama, article-crafter extraordinaire Harrison Krix of Volpin Props created this to-scale replica of the holophoner Frye occasionally plays in the series. Though the holophoner doesn't actually generate holograms, it is capable of producing sound and projecting an array of lights onto a nearby wall. 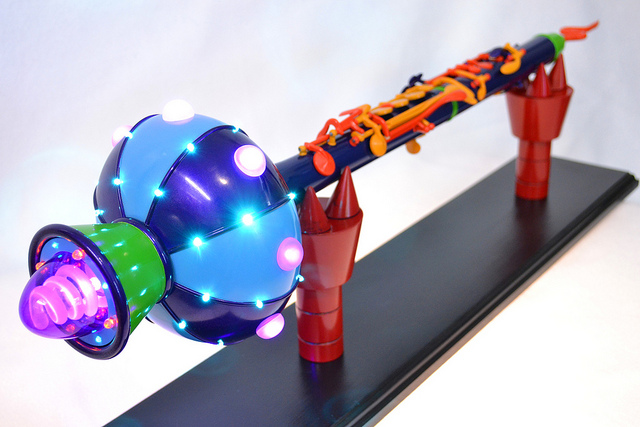 Yesterday, lucky con-goers at Celebration Europe II got to be the first in the world to catch a glimpse of the art that will be the foundation for the upcoming series Star Wars Rebels, the successor to the beloved Star Wars: the Clone Wars. If you weren't able to make it over to Messe Essen you can see the art for yourself here.

What if the great houses of the A Song of Ice and Fire universe existed in our present-day world? Given the level of ambition there, it wouldn't be surprising if each ended up as a major corporation. Graphic designer Mondayne had that exact thought and put together these super-glossy fake advertisements for the would-be uber LLPs of Westeros.

On Monday, the consummate inquisitor Alex Trebek turned 73. In honor of the birthday boy, Brackets Daily put together a survey of everyone's favorite Jeopardy categories. What is a wish for a belated happy birthday Mr. Trebek?

Much to the delight of cyber-fantasy gamers, Harebrained Schemes released their Kickstarter-backed Shadowrun Returns on Thursday. If you missed out on the release, you can purchase the game directly here or through Steam here.

Ever watched/read 2001: A Space Odyssey and wondered what it would be like to be Hal? Well programmer Liz England might just have a way for you to find out. In her game, ISIS, you are the titular space station hosting a lone crew member. Make your way through this text based adventure to see how long you and your human "pilot" can co-exist before one of you snaps. The game is 100% free to play here.

On Friday, mega-telecom conglomerate Vivendi announced that its brand Activision Blizzard was buying out the controlling stake of its parent company for the tidy sum of $8.2 billion USD. The purchase will effectively make the World of Warcraft publisher its own company again, though we'll have to wait and see just what that may mean for the future of its roster of titles.

Remember last week that we talked about the Cassini spacecraft and its mission to snap a rare picture of Earth from its vantage near Saturn? Well, here are the photographic results.

In an amusing instance of life imitating the Simpsons, the Norwegian town of Rjukan will attempt to ward off the doldrums of seasonal affective disorder this upcoming winter by focusing the precious little sunlight residents are exposed to onto a centralized location using giant mirrors. The mirrors, each 179.33 square feet (54.66 square meters), will be borne by helicopters, will get their first real test run this upcoming September.

Gravity. It's always acting on us, even when we're not on the surface of Earth. We know it's there, but have you ever seen it? Check out these amazing satellite images of gravity waves.

Speaking of not being on Earth's surface, the Mars rover, Curiosity, successfully completed its longest "road trip" to date. Considerately enough, it sent back these images of its red planet sojourn.

Tuesday's issue of Science would likely have made Christopher Nolan smile.  In the periodical, researchers from MIT chronicled their work successfully manipulating the neurons of mice in order to "implant" false memories.

A potential breath of fresh air for some allergy sufferers, a research team from the University of Cambridge has pinpointed the exact response by the human immune system that results in a person being allergic to cats. Bonus: the scientists believe that existing classes of pharmaceuticals can potentially be re-purposed to effectively treat cat allergies.