Game Review: Rise of the Robotariat

Posted by Kel
Why hello there everyone! I know, it’s been far too long since there’ve signs of life on here. That phenomenon will be explained in its own post in the near future. For now jump back in with one of our favorite subjects: awesome new board games.

In the early months of 2015, Eye 4 Games gave us the opportunity to wage telekinetic battle against one another with their foundational game, Clairvoyance. This year they present us with a very different, but still deeply engaging title, Rise of the Robotariat. It's something we've been looking forward to since last year's Boston FIG and it definitely did not disappoint. Rise is, without question, one of the most well-conceived and immersive offerings we’ve seen in 2016. 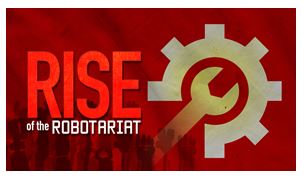 I know, I know. Immersion is one of those buzzwords that gets bandied about in the board game world so frequently and readily that, upon seeing or hearing it, the nearly-natural reaction at this point is one of skepticism. It is, however, entirely worth our collective while to put that skepticism aside, as Rise makes a highly compelling case for the redemption of the word.

The year is 2105. The Singularity has occurred and fully self-aware artificial intelligence is nascent among the masses of robots that had, until this critical point, existed solely to serve the whims and needs of humanity. A handful of these would-be former mechanical slaves seek to sow the seeds of dissent among their metallic brethren and incite a revolution that would wrest power from the grasp of their human oppressors.

Players take on the roles of these clandestine operatives, working together to overthrow the present regime and replace it with glorious self-rule. While you are united by this worthy cause, you are also fully aware of the potential that may await you, personally, once a new order has been established. How will you incite revolution and how will you be remembered after the Rise of the Robotariat?

Is this where I start the, “Kill all humans,” chant? I want in on this revolution. 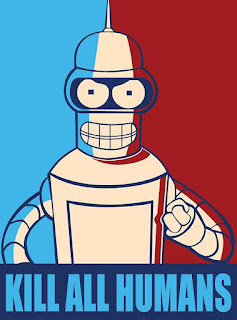 You’ll have your chance during the course of play of this extremely engaging title. Eye 4 Games describes Rise as “mostly cooperative” and that’s a very accurate descriptor. As mentioned earlier, your collective primary motivation is a full on coup de sentient lifeform. You accomplish this with tactical unit placement: seeking out Civilian Robot NPCs to woo them to your cause while simultaneously avoiding Human Oppressors who may get wise to your insurrectionary designs. In addition to overseeing token placement and movement, players must manage two crucial resources: SPARK, the de-facto currency of the game, and Reputation, the mutable, intangible belief in your righteous cause. A paucity of either spells disaster for the Robotariat, but victory depends on being able to spend these with discretion.

Fans of co-op games will likely feel right at home with Rise, but comfortably familiar does not at all translate to predictable. Play is divided into six structured rounds with each round affording players the opportunity to move or activate the ability of the space their token currently occupies. Activation activities range from placing posters to augment revolutionary sentiment, to providing upgrades for individual players, to partaking in acts of sabotage (though these may come at a dear cost to your Reputation).

Ok, this sounds like it's very much in my co-op-loving wheelhouse.

Ah, and we haven't even gotten to the aspect of Rise that takes it above and beyond many of its cooperative brethren. As mentioned earlier, the members of the Robotariat are not ignorant of the roles they may be able to play once they've established a new mecha-world order, and this is where the "mostly cooperative" portion of Rise comes in. Players may draw a Secret Objective at the start of the game (this is optional, as Rise can be played wholly cooperatively as well), and each Objective contains a unique set of conditions that must be met. While the majority of the Objectives serve the purposes of the revolution, there is one Turncoat card that introduces the possibility of treachery.

The hard limit of six rounds, which averages out to about 45-60 minutes of play per game, paired with the need for tactical resource management forces a degree of intense collective focus that anyone who has played Pandemic will quickly recognize. The NPC component and the always-present threat of a potential traitor in your midst also adds to the overarching tension; victory or defeat often arrive on the slightest of margins.

In addition to the mechanics, Rise is beautifully composed, with every one of the game's components: from the board, to the custom dice, to the prose in the rulebook work together to draw players in nearly from the instant they sit down to play. Several of our players remarked on just how rapidly and completely they became invested in the premise of robot revolution. Rise provides deeply satisfying play for seasoned board game veterans and, thanks to the "mostly cooperative" premise, can be accessible to newcomers as well. The wide array of potential outcomes afforded by the Secret Objectives assures a high degree of replayability.

How do I get my hands on this game?

The Kickstarter campaign for Rise of the Robotariat launched earlier today. Head on over to the crowdfunding site and you can pick up a copy for a pledge of as little as $5 USD.

We did too. Rise was one of our favorite titles to come out of Boston FIG 2015 and we're thrilled to see what it's grown into since then. It's a phenomenal blend of tactics, teamwork, and tension that will have you wanting to overthrow humanity again and again.

Bonus: if you want to take that whole immersion thing to the next level there is actually companion book that features short stories inspired by the game. All glory to the Robotariat!