Posted by Kel
We promised you guys a cavalcade of new, fun indie games and we’re gonna keep delivering on that promise. All the games! We've spent part of both the pre and post-PAX days engaged in a series of epic psychic battles with one another via the card game Clairvoyance.  While Clairvoyance isn’t the first game made by Eye 4 Games, the folks behind the label count this title as being the foundation of their organization. 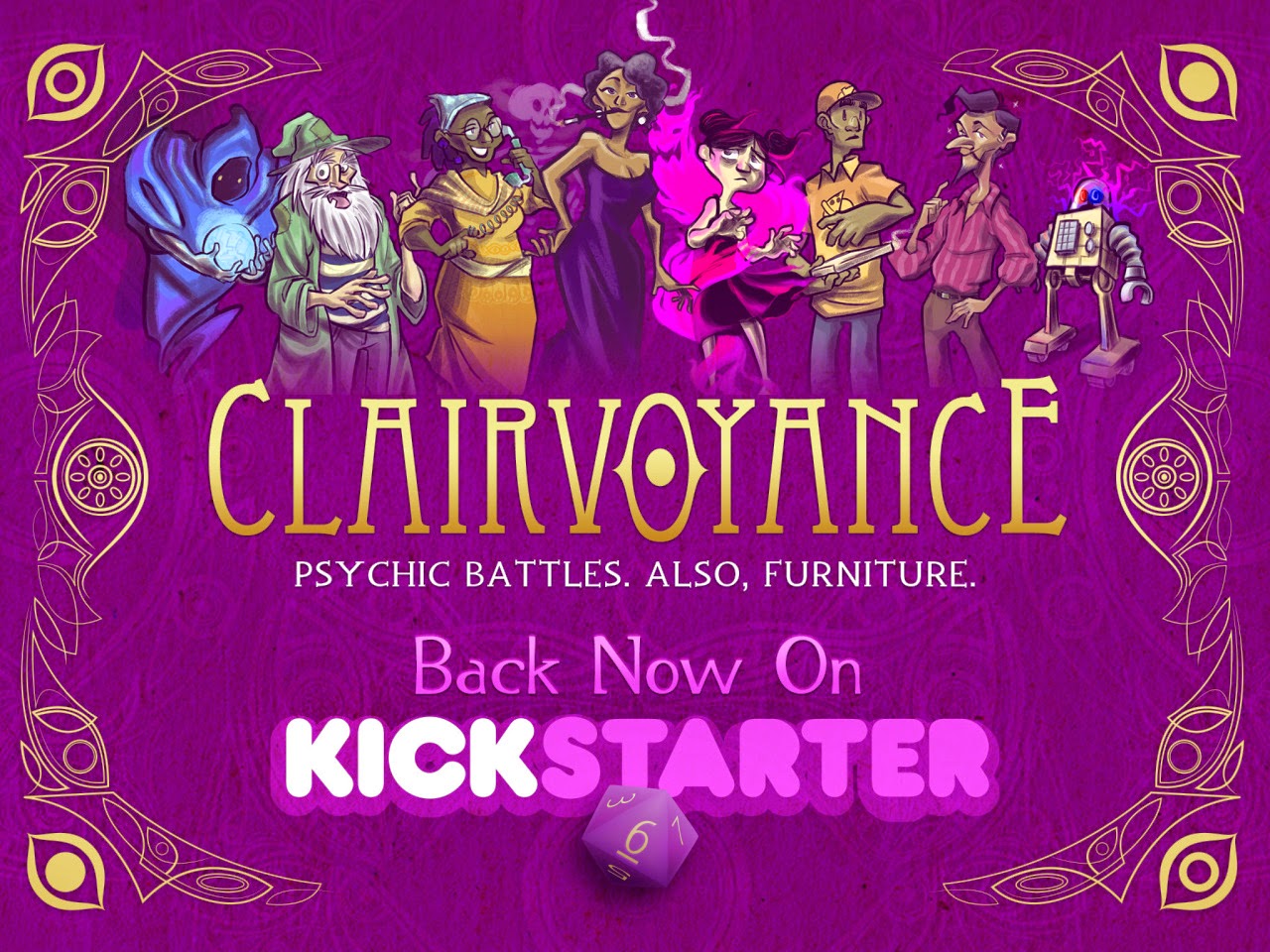 Wait, back up for a second. You said something about epic psychic battles. Can you fill us on that?

Sure thing. In Clairvoyance 2-5 players assume the role of various Jazz Era-esque characters and slug it out with one another using their telekinetic abilities and an array of objects. Said objects manifest as one of 80 cards, which form either the player's hand or their tableau, and the strategic use of said cards is just one of the foundations that Clairvoyance rests on. Aside from being the objects that players use as their erstwhile projectiles, the cards can also allow players to mess with their opponents or, conversely, provide a measure of defense against such machinations.

So you have a hand of up to 5 cards and you'd like to flex those telekinetic brainwaves by throwing the object depicted on one of them at an opponent. Most objects must first be possessed, or removed from your hand and placed in a tableau in front of you. This action invites your fellow players to try and modify or otherwise stymie your intentions by playing cards of their own. If your would-be weapons have survived your fellow players then this will likely be your first encounter with Clairvoyance's truly unique mechanic: die turning. 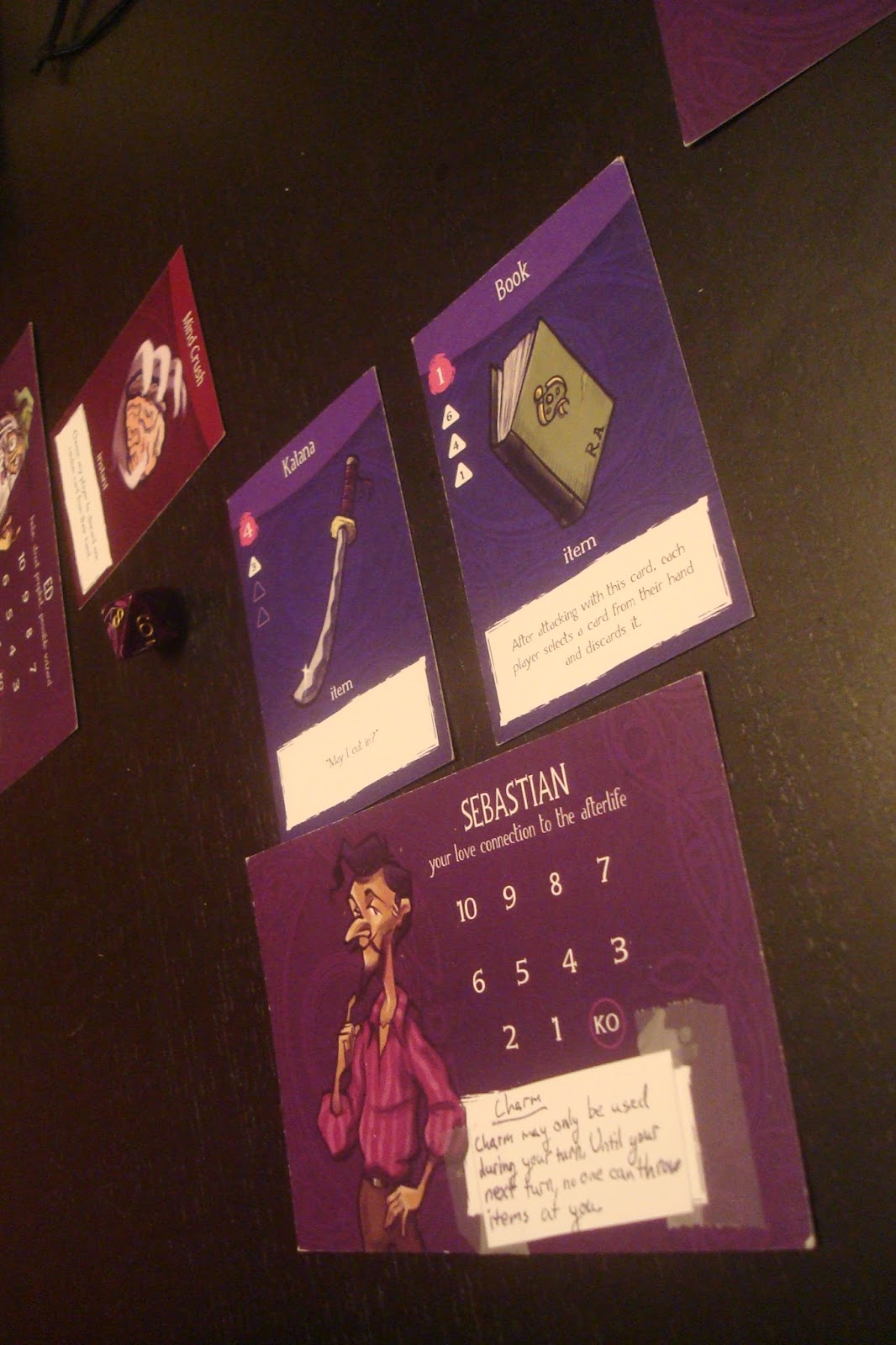 Nope. Although you're working with an 8-sided die (which has a beautiful purple-and-gold swirled design that matches the rest of the game), the only time you actually roll it is at the very outset of the game to determine who goes first. After that, all interactions with the die are to turn it so that a new face is presented.

Whether your telekinetic weapon issues damage or not depends on which faces of the die are showing when you send the objects hurling into proverbial space. The card depicting the objects details which 'activation faces', or sides of the die, are required to either be showing or available on the sides of the die immediately adjacent to that which is facing up. When you attempt to throw an item, you turn the die along one of the three available edges to reveal an adjacent face (and the three adjoining faces). If either the revealed face or revealed adjacent faces matches the activation number on the card then your attempt is successful and you send the object crashing into your chosen opponent, diminishing their HP. The last player to have non-zero HP is the winner.

It's really not as complicated as it sounds, we promise. The rulebook includes excellent examples and we were able to get the hang of the mechanic by the end of one person's turn. Speaking of the rulebook, it's extremely well-written, concise, and full of tongue-in-cheek snark that may elicit chuckles. That good-natured vibe is consistent throughout the theme of the entire game, which creates this immediate air of welcome. Add to that some striking artwork and brief but detailed backstory for both the playable characters and the game as a whole for a deeply enjoyable overall gaming experience.

One of our favorite fast-to-play (fast being under 1 hour) games is High Noon Saloon by Slugfest Games and Clairvoyance echoed some of the best parts of that title. The die rolling adds a bit of a twist on your standard draw-and-sling-from-the-hand style of play, but it doesn't slow things down. We found that games consistently fell within the 10-15 minutes per player guideline stated in the rulebook. Furthermore, the die rolling adds a bit of strategy, allowing Clairvoyance to appeal to experienced gamers while not creating a massive hurdle for newcomers.

A compact, highly portable title, Clairvoyance can be easily stowed in a backpack and the space required to play is such that it can easily make an appearance while waiting in line at a convention but still fit right in during a game night. It's a beautiful, often funny, wonderfully put together title that speaks volumes about the time and care that went into designing it.

Clairvoyance is an all-around good time and we definitely recommend it. Its Kickstarter is already fully funded (with one stretch goal reached!) and will remain open until April 8th. You can also download the black and white print-and-play version here for free. Pummeling your friends is rarely this fun!