While matching games tend to get written off as something for casual gamers to busy themselves with, Dreadbit is doing their best to change that perception with their first title, Ironcast. While on the surface the game may look a bit like PuzzleQuest with a Victorian Era Steampunk flair, my time spent with the match-3/roguelite hybrid quickly revealed it to be much, much more.

Ironcast is a true hybrid and has a considerable amount of RPG elements welded onto its match-3 core game play. Without spoiling too much of the story, the basic premise is that, in an alternate history, England and France are at war and use Steampunk/Clockwork mechs called Ironcasts and tanks to battle it out. You play as the pilot of one the eponymous Ironcasts, engaging in glorious combat on behalf of England (naturally, given that Dreadbit is based in the UK). 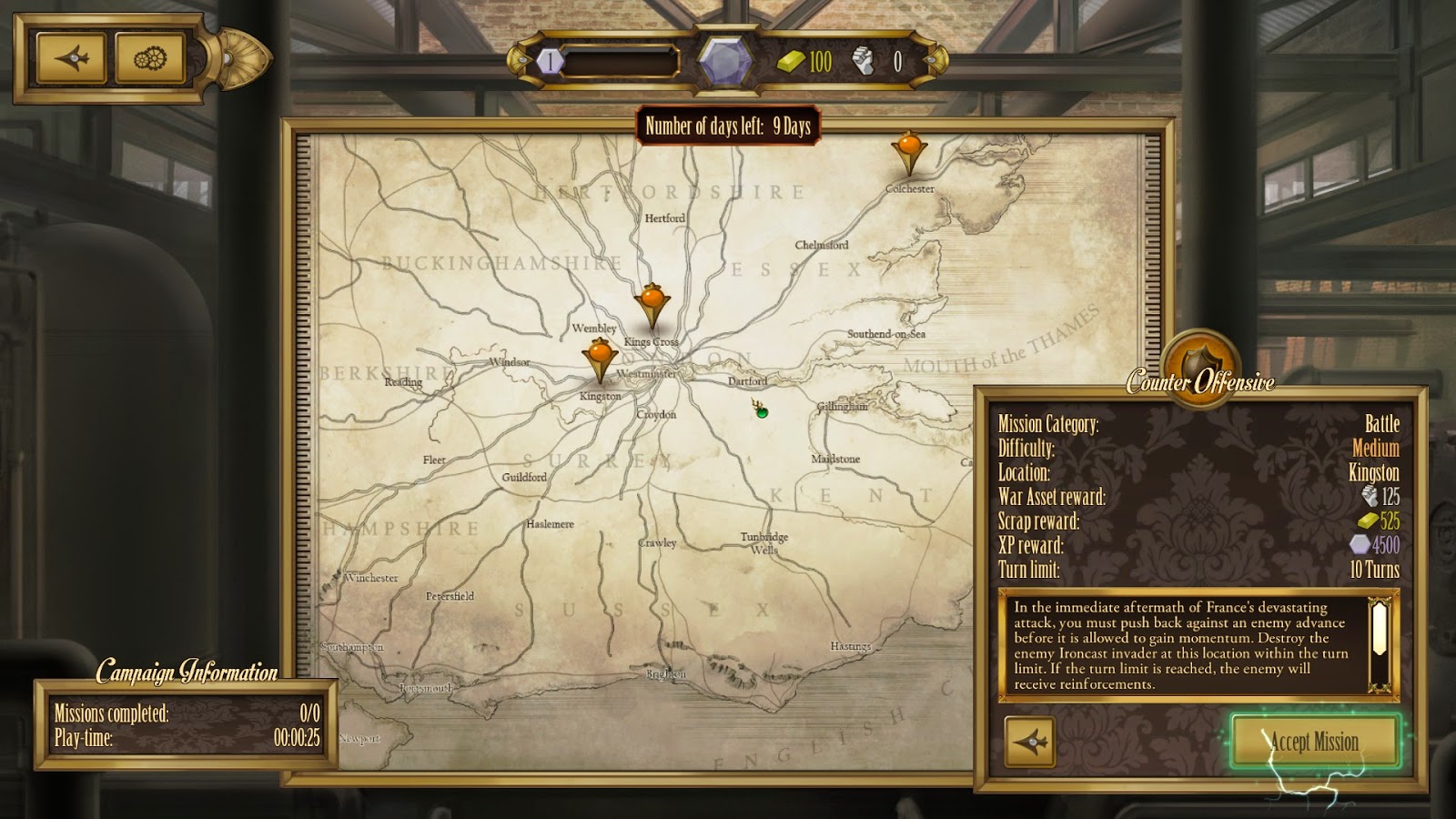 There are essentially three screens players will spend their time looking at: the world map to select missions from, the hanger bay where you customize and repair your Ironcast between missions, and the match-3 combat screen; the first two are reminiscent of FTL while the latter resembles PuzzleQuest.

After players will pick a starting commander and a Ironcast, it's off to the world map from which they can progress through a non-linear story line by choosing and completing missions with various objectives and, in turn, earn various rewards. Though there is only one option in terms of available commanders and Ironcast chassis at the outset, more of each will unlock over time as part of the roguelite aspect of the game. Rewards come in the form of schematics or parts to improve your Ironcast, upgrades to those parts, gold to buy these upgrades, or War Assets which are a unique resource that reduces the total health of Boss Enemies or provides alternative ways of completing missions instead of entering match-3 combat. In addition to rewards you also earn XP, which is used both to advance the current active game as well as unlocking things for future runs after you inevitably fail in the active game. 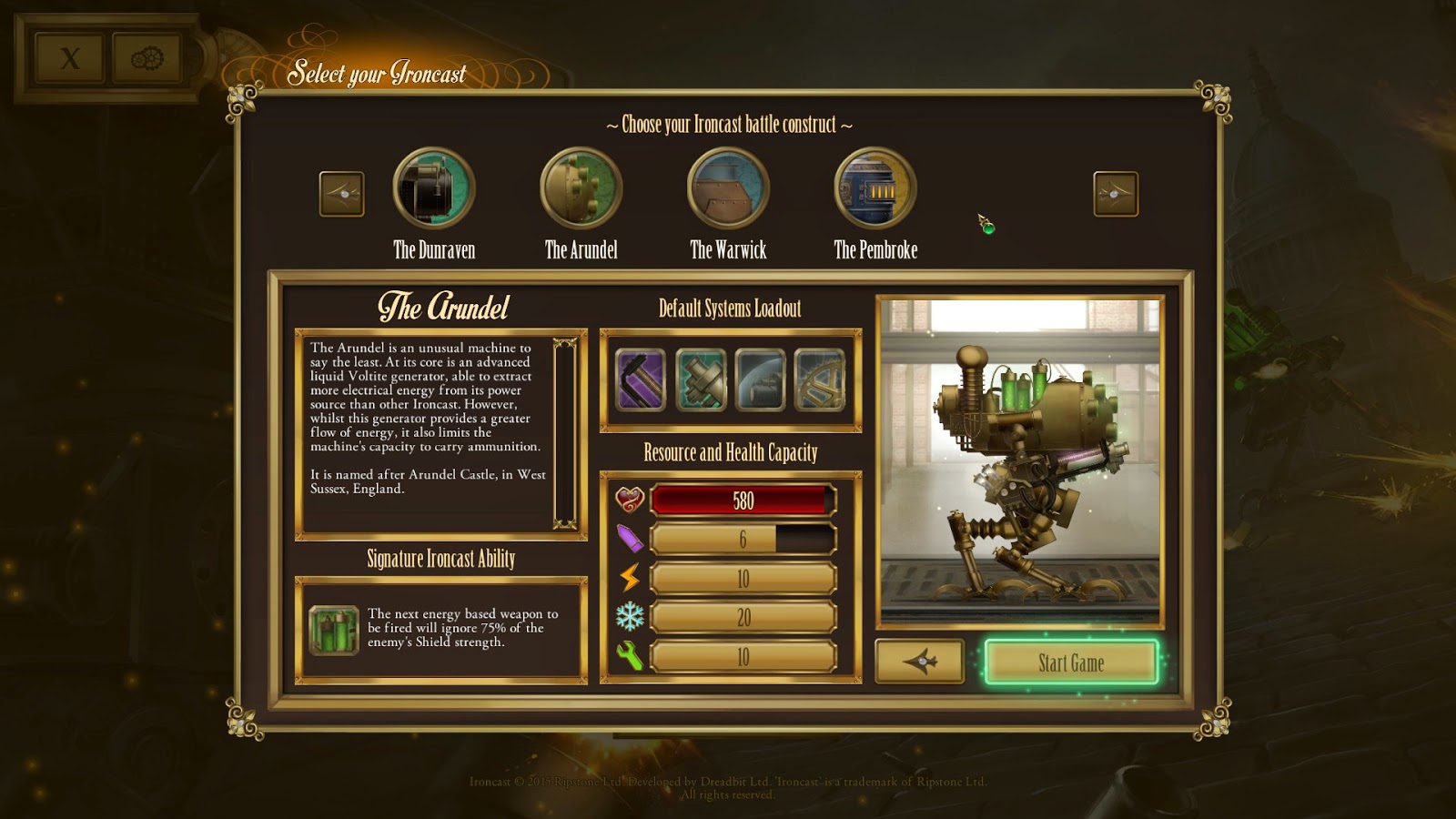 As mentioned earlier, missions most frequently take the form of match-3 combat. During each match, the player is depicted on the left side of the screen and your enemy is on the right with the matching grid separating them. In a standard match-3 style game you're typically swapping or shifting tiles in that grid to match three or more tiles that share a property, like color or shape, which clears those matches off the grid and allows more tiles to drop in from the top of the screen. While in a game like Bejeweled or Candy Crush this setup is perfectly fine, any game where you are playing against an AI, such as PuzzleQuest, this can be infuriating as the human player can feel cheated if the AI manages to chain dozens of matches together by random chance as new tiles fill the board and automatically match up perfectly.

Ironcast counters this issue perfectly by making a subtle but powerful change to the base matching mechanic. Instead of shifting and swapping tiles, Ironcast lets the player draw a line that connects through as many tiles of the same color/symbol as they want or are otherwise able to (ability here being any same-style tiles that are orthoganally adjoining). While fresh tiles still drop down into the play area after a line is drawn, this eliminates the possibility of random matches triggering chain reactions based on luck. Ultimately, this is more rewarding for skilled players who can plan ahead instead of those who are just fortunate. Another seemingly slight change that I felt actually led to a much richer game, tactically speaking, was the fact that players get up to three actions per turn instead of the typical one. 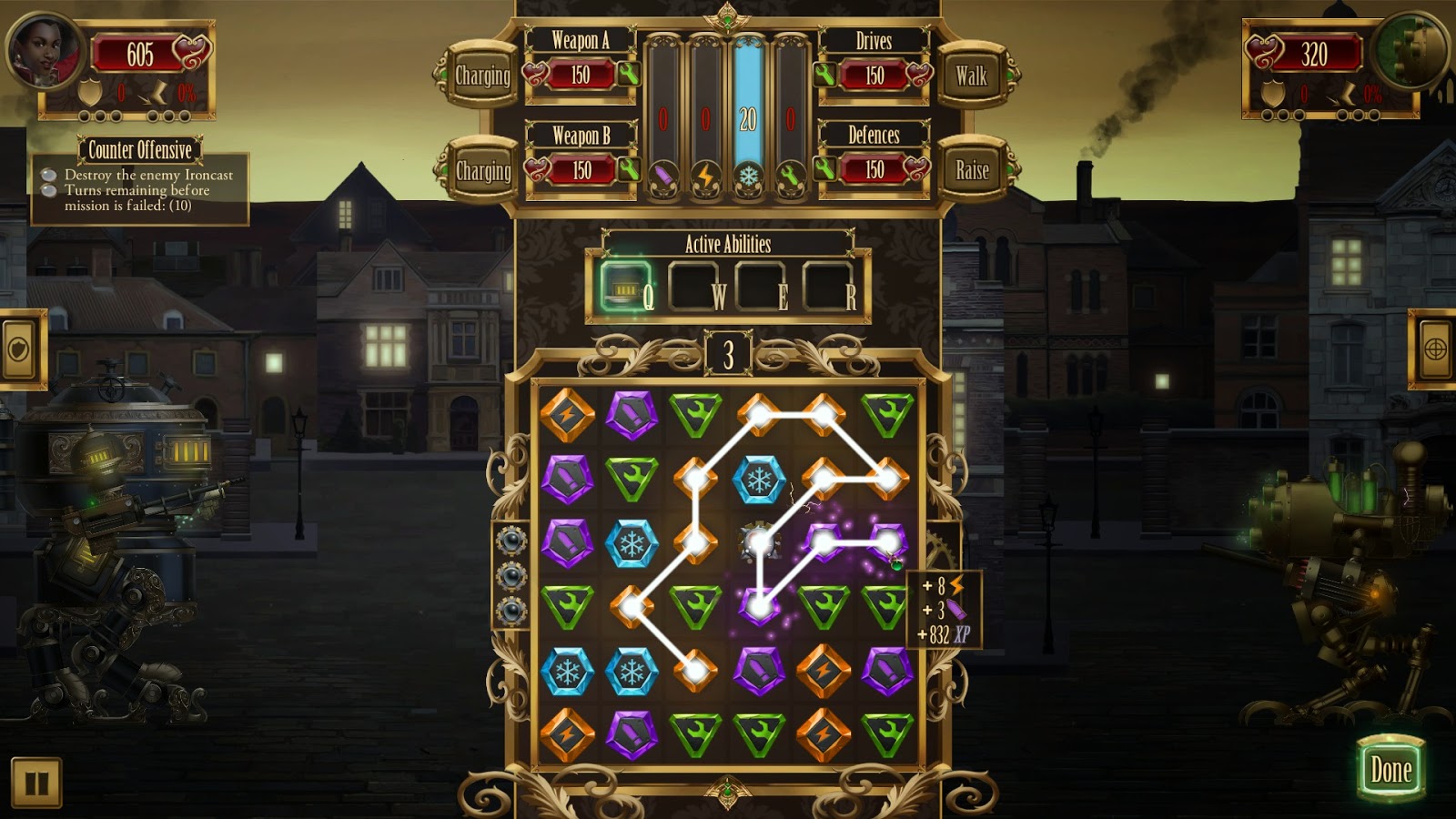 In Ironcast the tiles are of five colors and symbols that players try to link, each corresponding to a specific function: Green Wrenches for repairing damaged systems, Purple Ammo for powering weapons, Blue Snowflakes for coolant, Orange Lightning for energy to power defensive systems and movement, and, lastly Gold Scrap, which is used in the hanger between missions for repairs and upgrades. There are also special tiles that allow you to do things such as link different colors together or supercharge systems to be more effective. Each combat is a delicate balancing act of providing the necessary resources for the systems that demand them. More than once I found myself torn between matching a string of gold for desperately needed repairs and upgrades and simply keeping my guns sufficiently powered to ensure I would live long enough to spend the pittance of gold I already had. 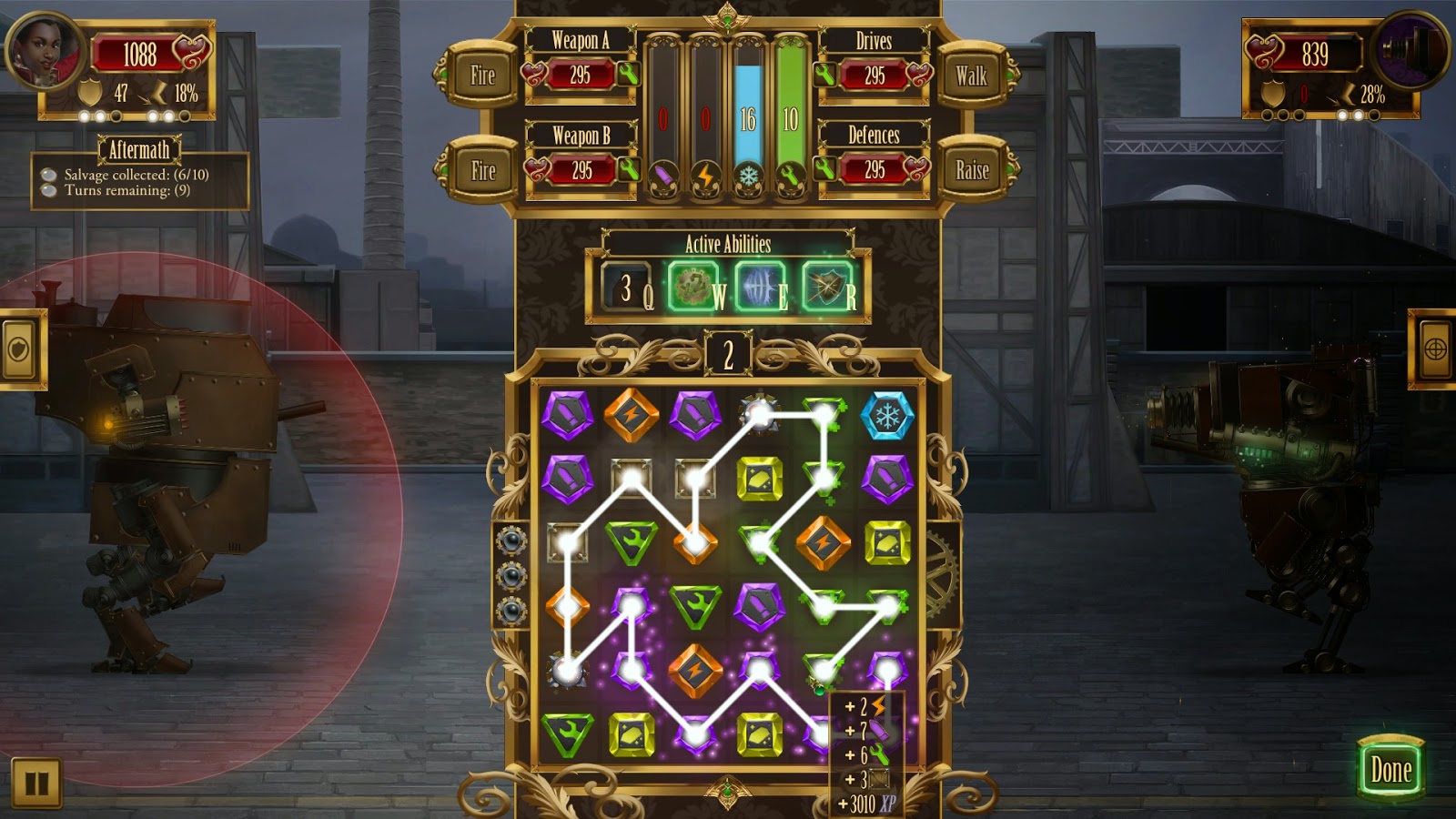 Where other match-3 games can feel mind-numbingly repetitive after a point, Ironcast keeps things fresh and moving with unlockable commanders, chassis, loot drops, and an intriguing story. After several failed runs I managed to beat a difficult Boss, which I assumed would be the end of the game a la FTL. Instead I was pleasantly surprised to find that this is the point wherein the real game was just beginning. Without getting into spoilers, apparently not everything my character had been told up until that moment was as it seemed. 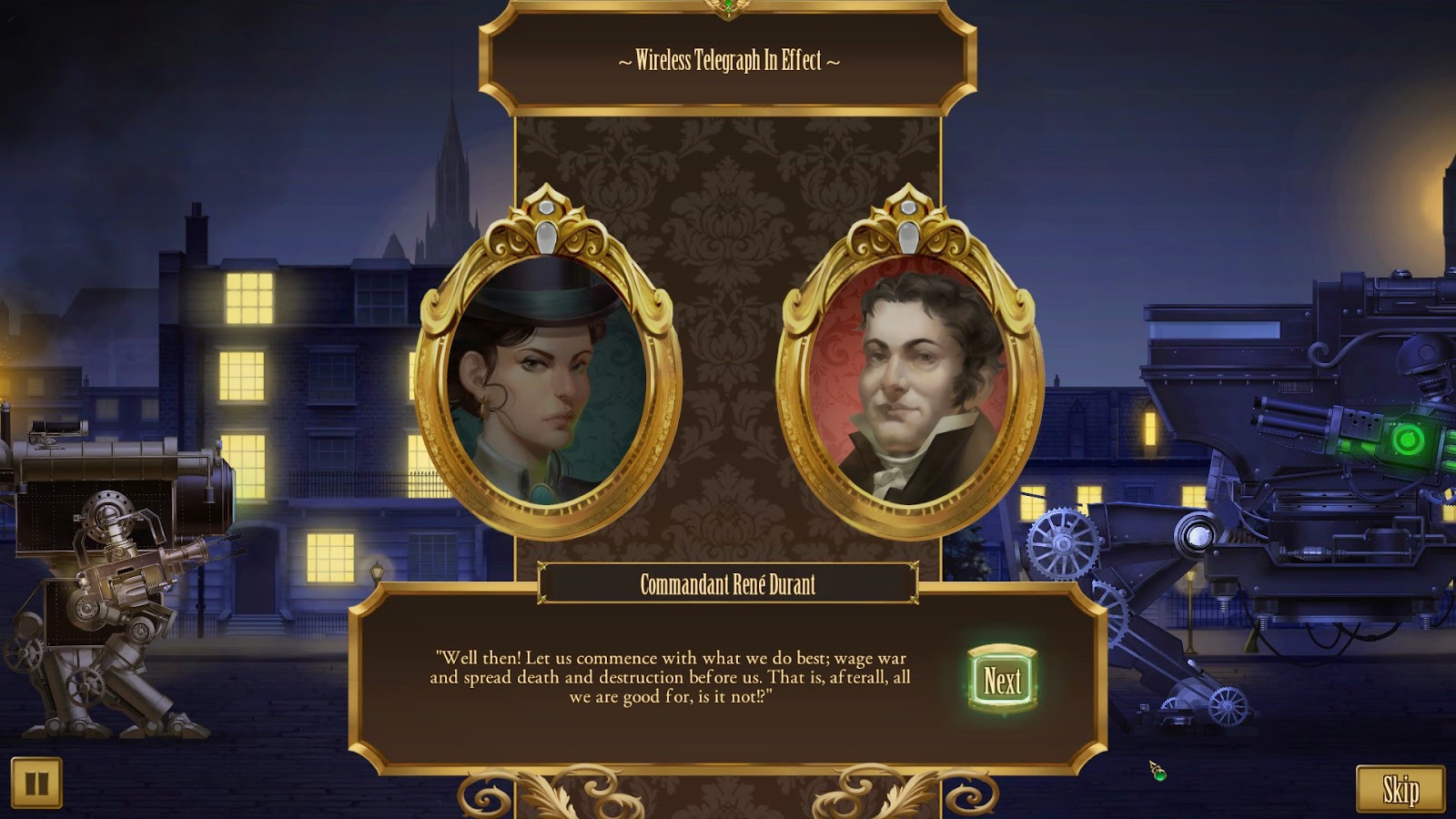 Overall, I found the gameplay challenging but never unfair, and the global XP allowed me to feel like I was always making some progress even through failure. Better-than-average story telling combined with very welcome improved strategy elements to the classic match-3 formula means the lovely art style and combat animations are just icing on an already masterfully crafted cake. Ironcast doesn't reinvent the concept of matching games, but rather redefines what they can be capable of. I sincerely look forward to playing more of it and suggest you check it out once it releases on March 26th for PC/Mac/Linux via Steam and the Humble Store. Bonus: the game will be available at a 30% discount if you order from Steam or Humble in the first five days after launch. Ironcast will also be available on PS3, PS4, and Xbox One later this year.

Ironcast was reviewed on a PC using a beta access key provided to the Care and Feeding of Nerds by Dreadbit.