Posted by Kel
It’s been the better part of a week now and the PAX-induced grins are just beginning to fade. You hear that burgeoning seasonal allergies and mid-April snow? Even you can’t crush the con-happy. 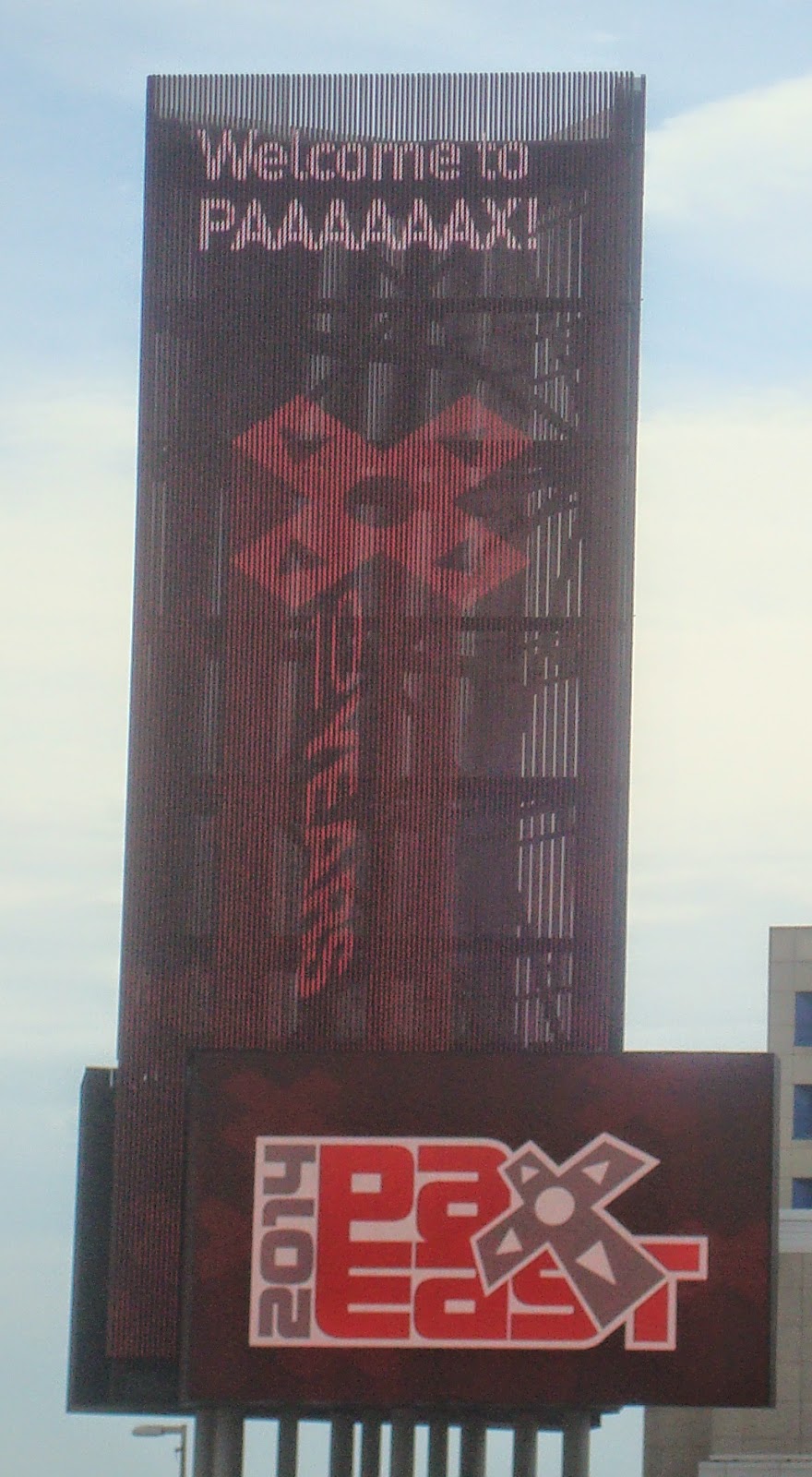 Despite the absence of a few AAA developers, there were still plenty of interesting gaming experiences to be had at the BCEC. The prevailing MO amongst the developers seemed to be ‘make a huge statement in a press release before the convention, then attempt to capitalize on the resulting furor.’ The technique met with mixed results for reasons we’ll go into in a moment, but also created a paucity of new headlines stemming directly from PAX.

In keeping with the other convention roundups, these highlights will be listed by publisher and all gaming news will be followed by general observations on the overall experience.

Blizzard Entertainment – Last year’s oddball offering, Hearthstone, was once again at the forefront of the Blizzard booth. Not only will the free-to-play digital CCG soon be available on your iPad, but a single-player campaign was confirmed to be in the works. Blizzard also called attention to its forthcoming MOBA, Heroes of the Storm, but this title is in the very, very early stages of development. If you're keen to get in on the eventual beta for Heroes, you can sign up here.

Denneton Games – If you blinked you were liable to miss Dennaton Games, though at least this year they were located in the Indie Megabooth and weren’t squirreled away beneath a staircase (no joke, that’s pretty much where they were in 2013). Only the crowds gave any indication that a playable demo for Hotline Miami 2: Wrong Number was available if you were willing to elbow your way through and into the booth itself. Wrong Number looks and feels pretty much like a full-on reprisal of its predecessor, which everyone seemed thrilled with. So if you liked the first Hotline, odds are that you'll enjoy the sequel. You’ll be able to wade anew into the carnage during the third quarter of this year.

Firaxis Games (2K)– Firaxis was one of the few studios to actually make an announcement at PAX itself and their revelation is still making waves at this very moment. So what’s the hubbub about? There will be a new incarnation of the Civilization franchise and no, it’s not just going to be Civ VI. Meet Civilization: Beyond Earth.
As the trailer video suggests, Beyond Earth harkens back to one of the most beloved members of Sid Meier’s roster: Alpha Centauri. Given the fanbase Alpha Centauri boasts and the fact that it has been a full 15 years since the original debuted, the enthusiasm driving the reception that the announcement received is not all that surprising. The actual mechanics are, unsurprisingly, similar to those of Civ V, though the overarching victory objectives are rooted in survival and species perpetuation. As such, long-term planning takes on a new level of significance. Firaxis did not provide a specific release date, but indicated that the game would be available for PC, Mac, and Linux this fall. I’m already WAY too excited about this game.

Gearbox Software – In the days immediately preceding PAX, Gearbox introduced what will be the latest installment to their biggest franchise, Borderlands:the Pre-Sequel (yes, that’s actually the title). As the dual-faceted name suggests, the Pre-Sequel is set after the events of the first Borderlands, but before Borderlands 2 with the action taking place on the moon of Pandora. Players can select from one of four characters: Athena the Gladiator, Wilhelm the Enforcer, Claptrap or Nisha the Lawbringer, all of which have not only unique combat abilities, but skills that will (hopefully) keep your party alive on the deoxygenated lunar surface. A younger, less megalomaniacal Handsome Jack also plays a large role as the game guide. Though fans were legitimately excited for the Pre-Sequel (the lines at the Gearbox booth were arguably the longest at the con), many were disappointed to find that the demo was more of a guided presentation rather than something they could get their hands on a controller for. People seem to be more forgiving of a non-playable demo when news of the game is mere minutes old.
The Pre-Sequel is slated for release this fall and will only be available for PC, PS3, and Xbox 360 (no love for the Xbox One). Gearbox also indirectly offered a few updates on their forthcoming collaboration with Telltale Games, Tales from the Borderlands, which is also forecasted for release sometime later this year.

Klei Entertainment – These guys cleverly reclaimed their old bit of prime territory in the BCEC between the main demo hall and the Indie Megabooth. Though the locale of their booth likely garnered a fair amount of traffic, the buzz concerning the two playable demos Klei had on hand proved to be the real draw. One demo was for Reign of Giants, the DLC for last year’s hit Don’t Starve. I played the demo as the carnivorous actress Wigfrid, one of two new characters available via the DLC. The other character is Webber, a human boy living inside the exoskeleton of a spider that unsuccessfully tried to eat him. Because that’s not creepy at all. The demo loaded you down with meat (Wigfrid will eat no plant matter) and other tools, so it was tough to gauge just how difficult the DLC will make the game...or so I thought. With about 1 minute remaining in the demo, I met one of the eponymous giants. Let me tell you, if you thought the Treeguard was reason to flee/build the best possible armor, then a beefed-up, freeze-laser shooting Deerclops will assuredly force you to up your game. Reign of Giants is currently available for early access download on Steam; its price will go up by about 20% after April 29. 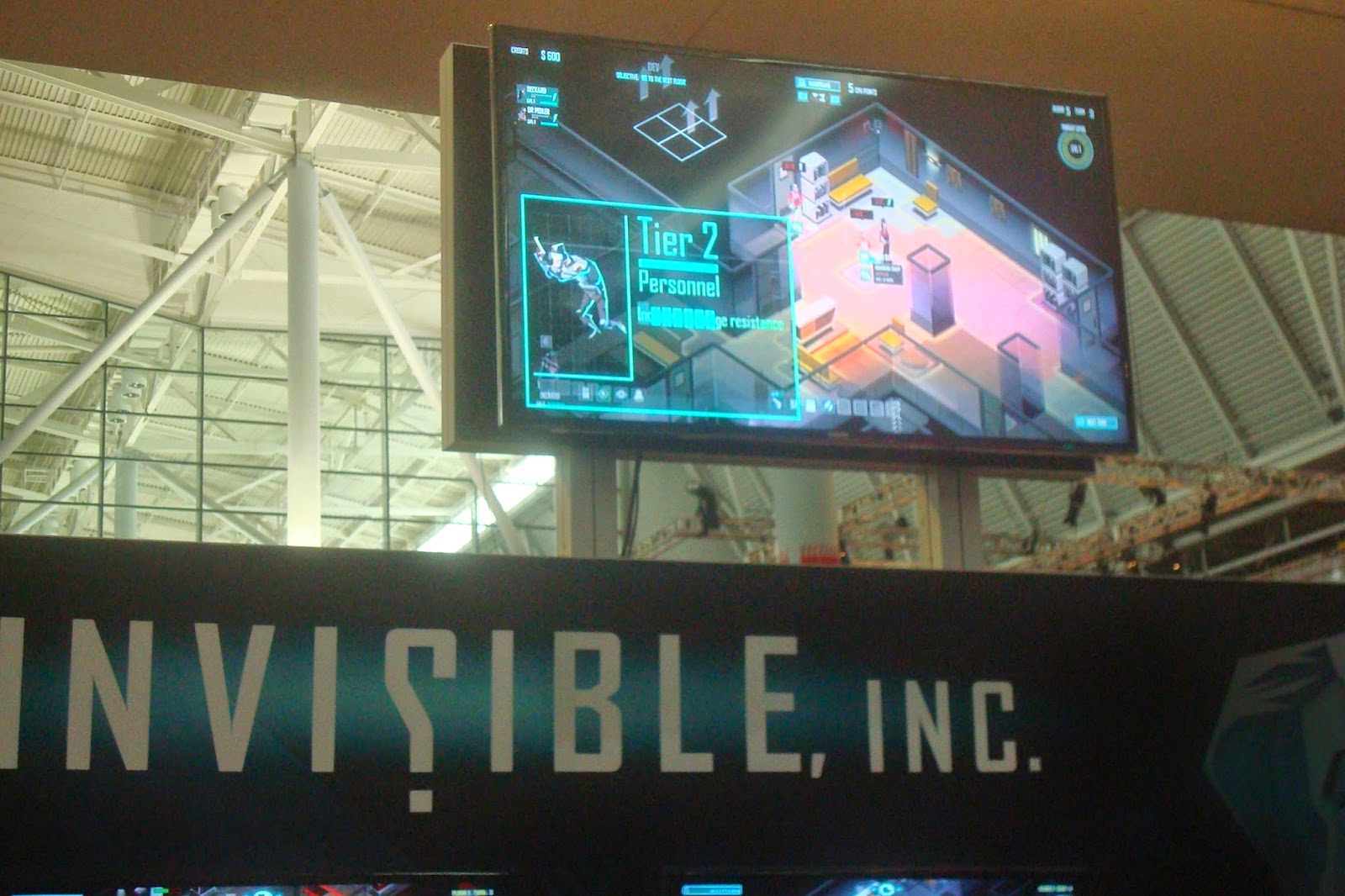 The other playable demo at the Klei booth was the latest alpha update for their turn-based espionage game, Invisible, Inc. The demo was fairly robust, allowing you to play through two whole levels, and the lines for it were consistent throughout the con. Playing the alpha alternated between enjoyable and frustrating. Though the Klei staff were always on hand to guide the experience, playing without their help quickly devolved into a grind. I’m no stranger to turn-based tactics, but that learning curve is more than a bit steep. Of course, you kind of expect this sort of thing with an alpha and it was clear that Klei was actively cataloging our feedback as we played. You can get direct access to the alpha via Klei’s microsite. The purchase comes with a second copy of the final game once it is released and the option to buy the full soundtrack.

Respawn Entertainment (EA) – Titanfall is only about a month old now, but Respawn seemed keen to work with its own momentum and announced that they will be releasing a modest DLC pack, titled Expedition, in May. While Expedition, and the three map packs it contains, will cost you, Respawn confirmed that all non-map related game enhancements will be free. The developer also reaffirmed its commitment to not having microtransactions in Titanfall. 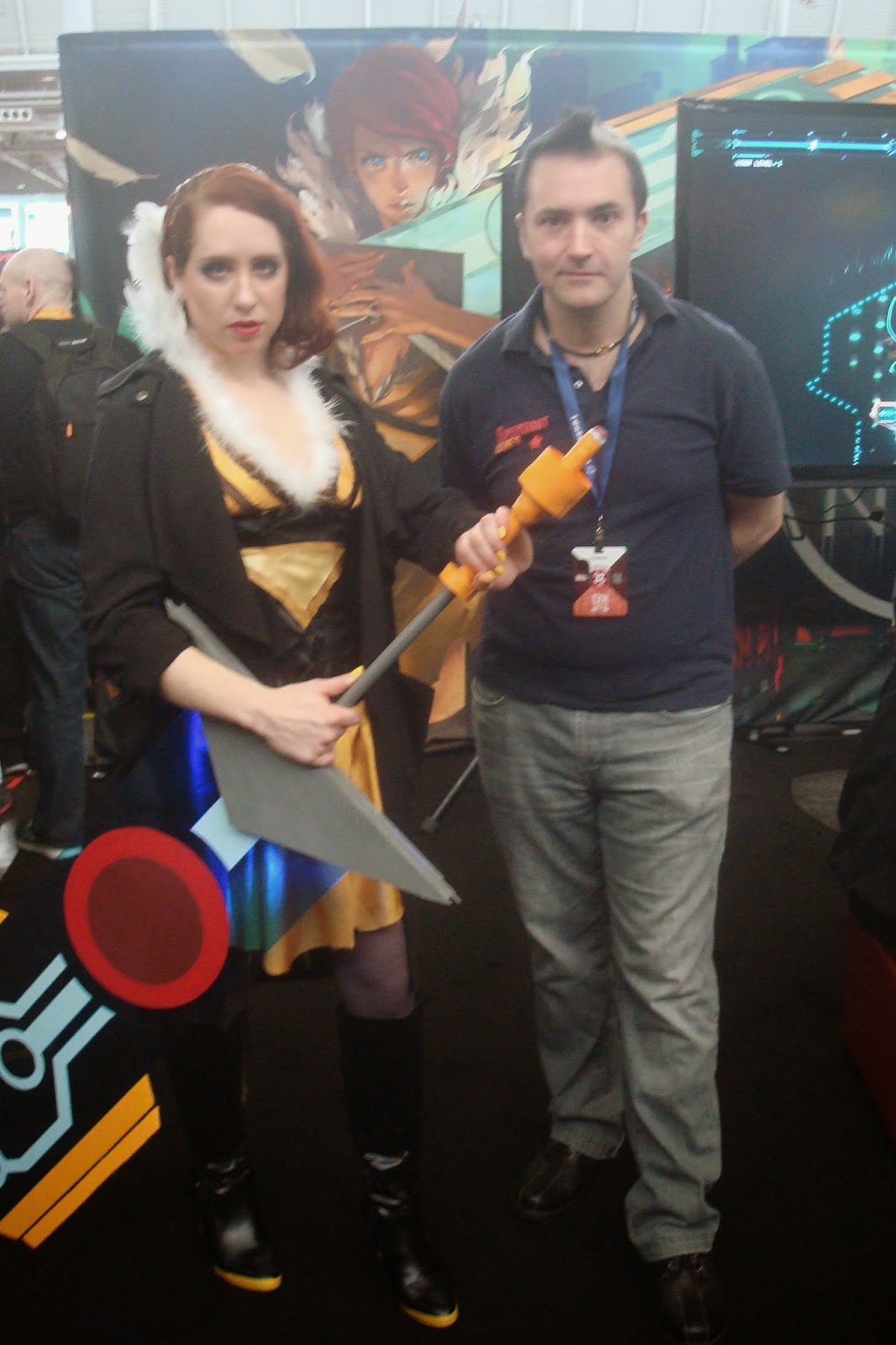 Supergiant Games – Less than 12 hours before the doors to the dealer hall opened Supergiant announced that their much-anticipated follow-up to Bastion, Transistor, would be available on both PC and PS4 on May 20th. The demo available at their booth was very similar to that of the alpha offered at last year’s PAX, but it was quite apparent that Supergiant had done an enormous amount in terms of cleaning up the mechanics and enhancing overall playability. Admittedly, I’m not at all an unbiased commentator on the game given how I spent all of Saturday. On a related aside, all of the Supergiant guys were incredibly nice and enjoyed my costume.

Turtle Rock Studios (Valve Software) – Turtle Rock’s presence in the dealer hall was anything but subtle. The towering statue of a Goliath from their upcoming title Evolve glowered menacingly, fangs (or tusks?) bared at passersby seeking to traverse the BCEC. The guys at Turtle Rock have been obsessed with Evolve since before their earlier creation, Left 4 Dead, hit the proverbial shelves and they’re seeking to accomplish nothing less than redefining the co-op FPS experience. If the glimpse provided at PAX is to be believed, Turtle Rock may be more than on their way to delivering on that. Evolve is due out in the third quarter of this year and will be playable on PC, PS4, and Xbox One. 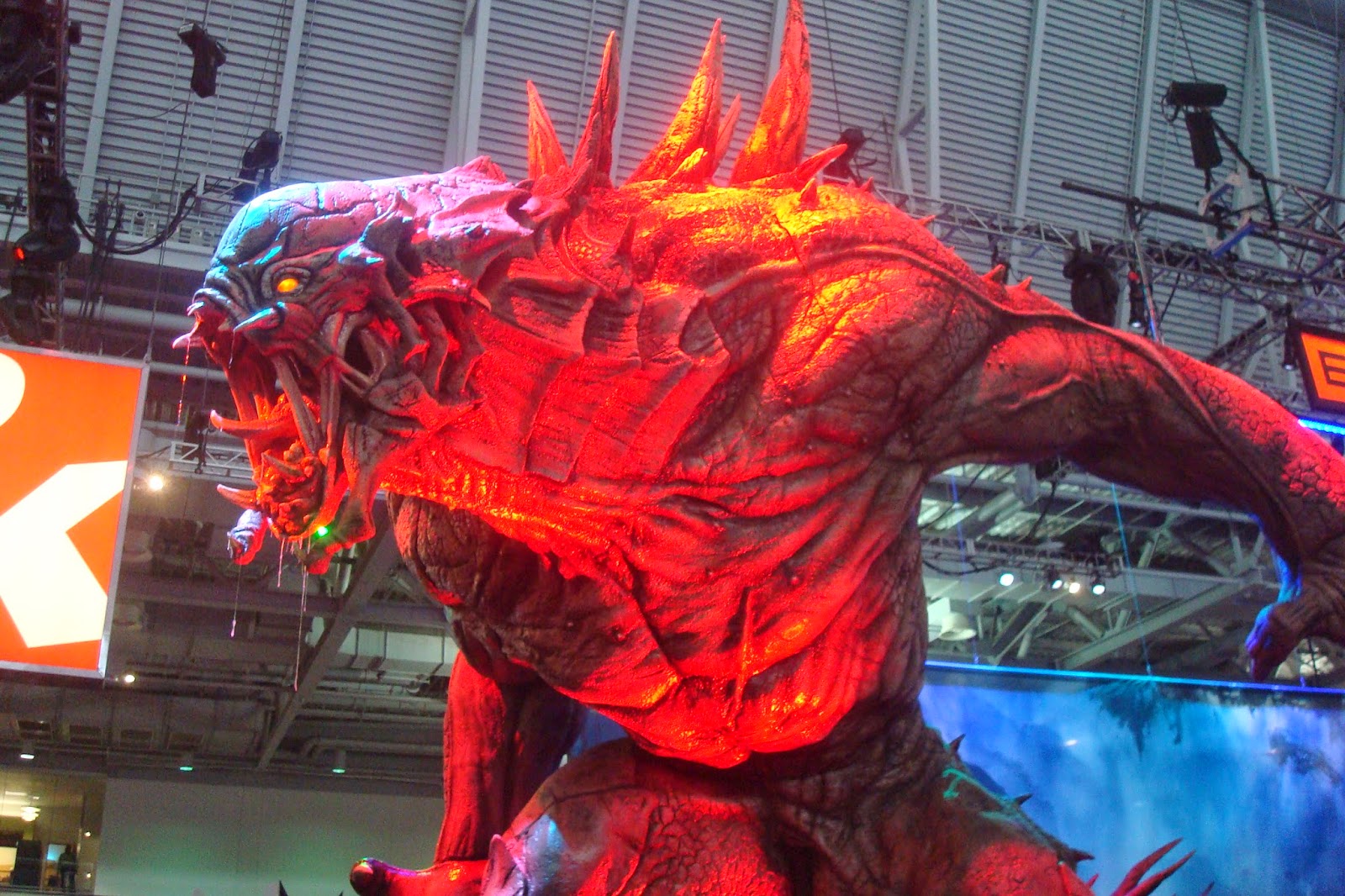 As for the convention itself, it was clear that the organizers understood how well the layout of the convention hall worked in 2013 and didn’t change all that much at this year’s event. Tabletop games once again occupied about a third of the main space in the BCEC and literally every table was packed with gamers from about Friday afternoon onward. The only logistical complaint I caught wind of was the fact that the halls themselves closed at midnight rather than 2am as with previous PAXes (PAXii?). Board game vendors appeared to be the most adversely impacted by this change, as activity in the board game portion of the hall began to wind down around 10pm rather than midnight. The time change was especially disappointing, as night owls could have benefitted from the brand new late-running T service. It’ll be interesting to see if there’s a reversion to the 2am close at next year’s PAX.


Other assorted PAX tidbits:
On a final, more personal note, I was very happy with how the costume turned out and may very well spend next winter making improvements on it in order to wear it again next year. Until 2015 PAX! 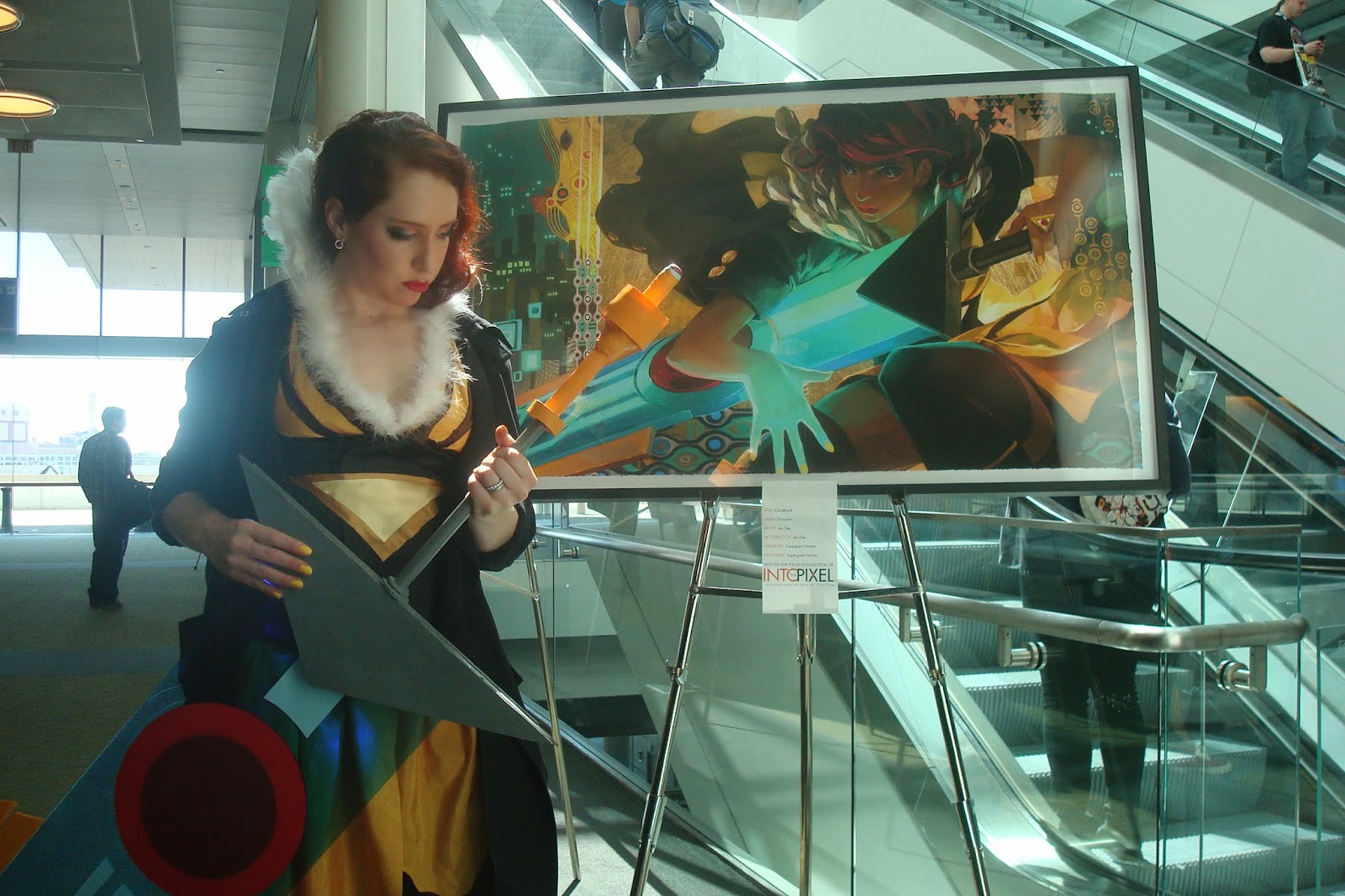