Posted by Kel
Whew! It’s been a very interesting few days. In the past week we’ve been blanketed with over 4.5 feet (apx. 1.37 meters) of snow and the rest of the past two business weeks have been a cavalcade of snow-related hijinks. Amidst all the storminess, the true point of high drama wasn’t the blizzard but, rather, was what has become the annual spike in blood pressure otherwise known as housing registration for Gen Con.

To the outside observer, that last sentence may seem hyperbolic, but if you’ve ever been a participant in the process you know just how nerve-wracking it can be. This year was certainly no exception in that respect. After the chaos that characterized last year’s registration, Gen Con announced that it would be implementing a handful of changes to the registration process in the hopes of addressing some of the biggest sources of frustration from 2014. Arguably the most controversial of these changes was the addition of a lottery system that would randomize attendee access to the housing portal.

In all previous years, using the housing portal was pretty much the textbook definition of a free-for-all. You signed on as close to noon EST as humanly possible and prayed that the server gods would smile on your quest for affordable convention housing. Until recently (let's call 'recently' the past two or so convention years) that roughshod procedure functioned with a reasonable degree of satisfaction for those congoers in need of a place to sleep while in Indy. However, it's no secret that this level of success was only possible because demand in past years was nowhere close to the level it's at now.

As we discussed in detail in this post concerning Gen Con housing last year, the number of Gen Con attendees has been increasing at an exponential rate each year for the past five convention years. In that spirit, I've updated the chart featured in last year's post to include attendance data from Gen Con 2014. The result looks like this:
It's pretty much what we'd expect of exponential growth: a sharper, more pronounced slope as the line progresses towards the right-hand side. But, at this point, the story isn't the conventions already in the books; the real point of interest are the Gen Cons that will happen between now and 2020. We can treat 2020 as our break point because that is the last year of Gen Con's formal agreement with the Indianapolis Convention Center.[1] So what can we expect between now and then?

Well, I tried to come up with a reasonable simulation by forecasting a rate of growth similar to what we've seen in the past few years. If we look at the past three convention years, the weighted average increase in attendance is 15.53% year over year. I would have gone back farther to get this measure, but 2011 was a monster year in terms of new congoers and using it skews the average quite a bit higher. I then computed two other averages: one based on the year-over-year percentage increases that Gen Con has reported to give us a lower boundary and the other using six years of raw data instead of three (thus including the high 2011 reading) to give us a reasonable high boundary. Using those averages to compute the number of additional attendees per annum, then projecting the results out over the next six conventions, produces attendance figures that look like this: 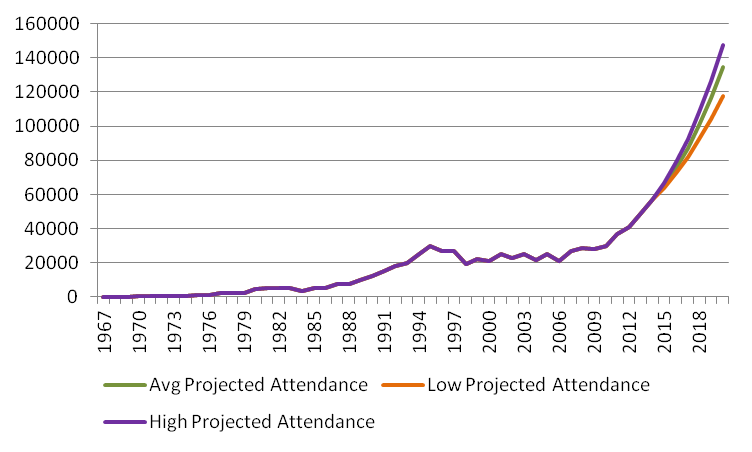 In each of these cases, attendance is slated to be more than double last year's final tally of 56,614 by the year 2020 and, in two of the three cases, we'd see doubling of the 2014 measure by 2019 or earlier. This projected increase would effectively mirror the trends in attendance during the past six years given that, “..since 2009, Gen Con’s Annual attendance has more than doubled.”[2] The preliminary information released by Gen Con indicated that this year’s registration was, “…the largest opening registration in Gen Con’s 48-year history,”[3] so it seems as though at least one of our forecasts is a reasonable estimate of the near future. If any of these cases actually come to pass, it would put Gen Con alongside both present-day New York and San Diego Comic Cons in terms of attendance.[4]

Even if none of the above transpires as described and Gen Con attendance enters into a period of relative stability akin to the years 1997-2008 we, as would-be congoers, would still be left with the reality that the Best Four Days in Gaming can only accommodate a percentage of us. The question then becomes, “Well who gets to go?” The immediate follow-up thereto has been uttered in equal parts benediction and curse, “What’s a fair way to determine that?”

This is where the new lottery system was supposed to come into play. Upon purchasing a badge, a would-be attendee was supposed to be assigned a random time. This time represented how long that badge holder would have to wait before being granted access to the housing portal and would also provide the administrators with a measure of control over the demands being placed on Gen Con servers, as the latter had been the source of numerous headaches in previous years.

Registration came and went. Before all was said and done the inventory of the housing portal was wholly depleted. There were those parties who came away pleased with the results, those that could accept the results, and those left gnashing their teeth in fury/disappointment. Gen Con attempted to address this, along with the handful of technical issues that sullied the process, but also conceded, “…rising demand for downtown housing is growing faster than the amount of available properties.”[5] This statement, along with a similar note posted to the con’s official Facebook page just before registration began, marked some of the first full organizational admissions that demand far outpaces supply. Even a flawless registration system would not deliver the experience that everyone who sought it was hoping and planning for and this problem will persist so long as more new people want to attend.

Which leaves us at the present. Fair access will be determined by whatever means Gen Con wishes to implement in a given year and, really, that's pretty much in line with what most other conventions of its size have already done. With demand at such incredibly high levels, no system will be able to accommodate all would-be congoers. PAX East said as much in its registration follow-up FAQ,"...no matter how you skin this, there will be about 75K people who aren't happy because they wanted a badge and were unable to purchase one. All another system would do is take badges from one person and give them to another." Given this, it's likely that Gen Con will default to whatever ends up being easiest to administrate and is most cost effective.

Growing pains definitely earn their moniker and it remains to be seen what the long-term effects of this dizzying expansion will be for Gen Con. What we do know is that the ability to count on rolling dice during the Best Four Days in Gaming is long gone. As mentioned last year, the Nerdaissance runs on with board games at the front of the proverbial pack. It is a beautiful, if bittersweet, phenomenon and it's unfortunately something that we have to learn to live with.