Game Review: Find It & Bind It

Posted by Kel
Hi everyone. What do you think of the new site? The redesign has been in the works for a little while and we hope this makes your interactions with the Care and Feeding of Nerds more fun and user-friendly. A huge shout-out to Kay Luxe Design who coded the new site!

There have been a couple of excited mentions of new indie board games being brought your way and now we can follow through on that hype. Over the next few weeks several members of the Game Makers Guild are launching crowdfunding campaigns for their projects and we've had the opportunity to play quite a few of these. As such, we can give you the complete lowdown on these games so you have a full cache of information at your disposal as you decide which projects you may want to lend your support to.

Since we're talking about independently developed games that are either currently without a publisher or are aiming to self-publish as part of their crowdfunding efforts, we will not be assigning grades or ratings to these projects. The idea is to provide you with information so you can be happy in your decision to back a project or not. Instead, we'll summarize our reviews with recommendations and let you know if we plan on contributing. 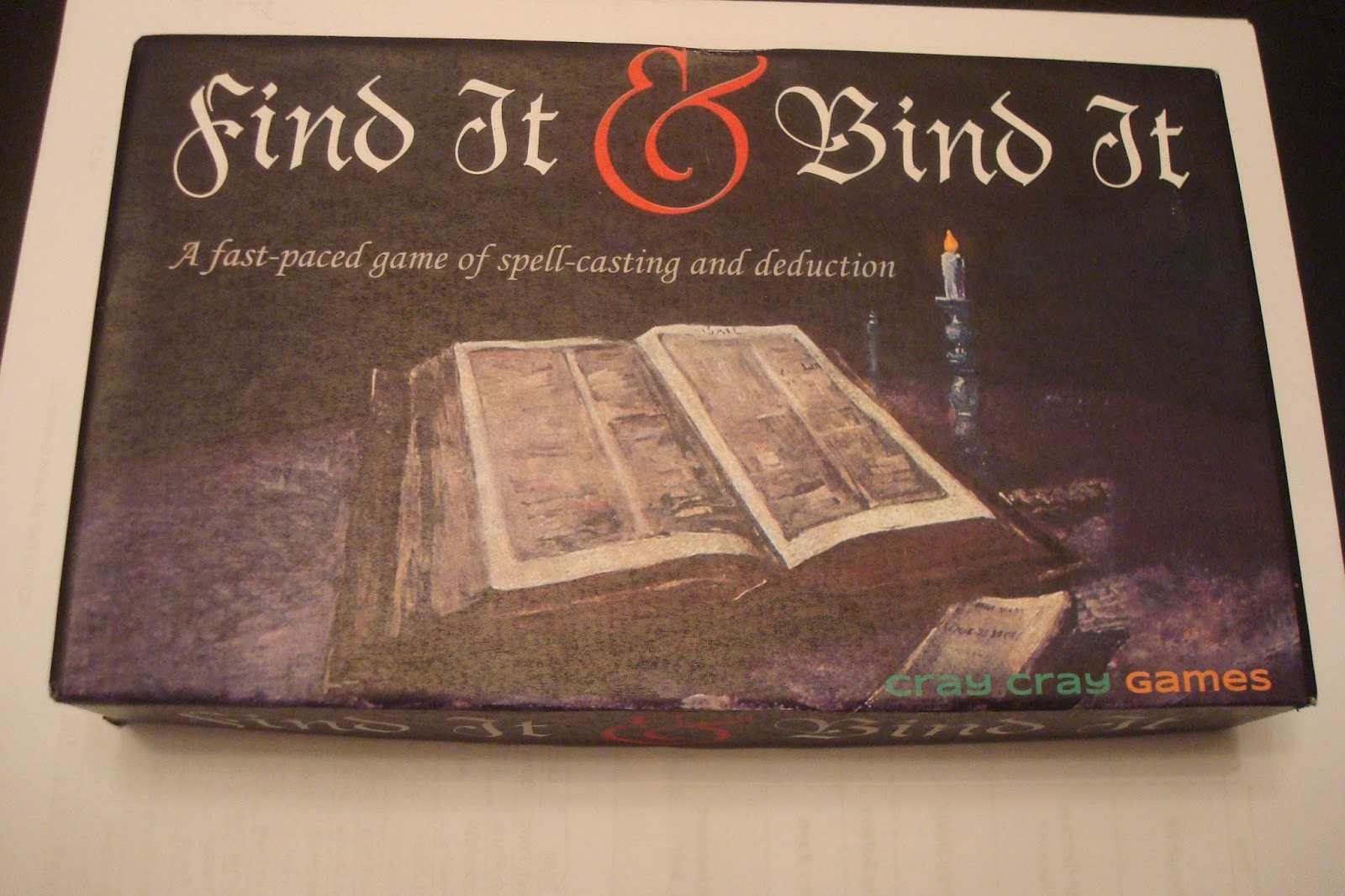 First on the docket is Find It & Bind It by Cray Cray Games. If the title sounds familiar, you might be recalling our Developer Dialoguewith Cray Cray Games that included many a mention of Find It & Bind It. (If you haven't read that post, we highly recommend you do so before continuing with this one.) The Kickstarter for this rapid-fire card-based game went live earlier today, so what's it all about?

Players of Find It & Bind It take on the role of witches on a quest to find the Book of Shadows and bind it to their bidding before rival covens (fellow players) can do the same. The Book of Shadows is hidden amidst a grid of eight other cards much like the layout pictured below. 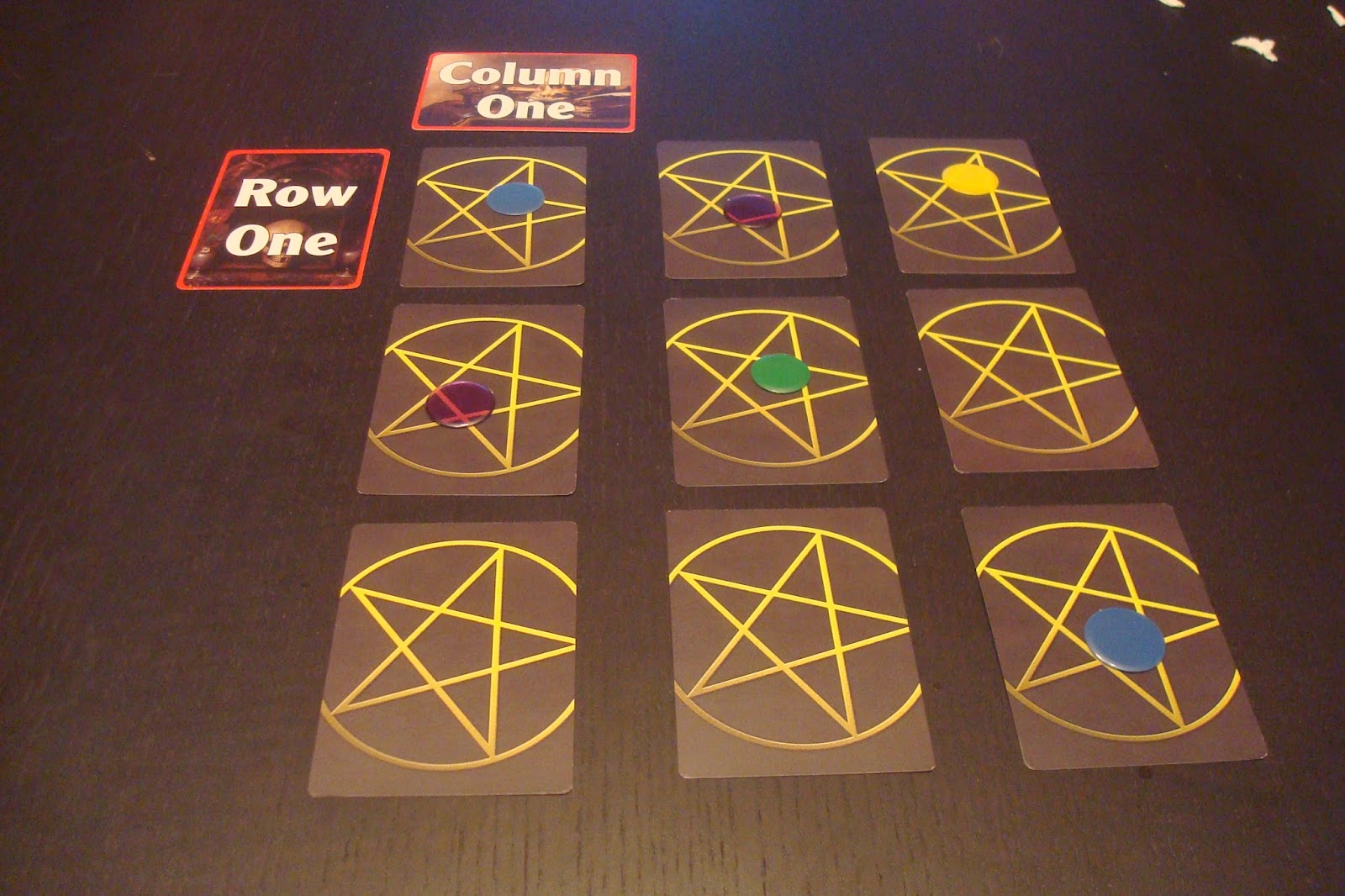 To discern the location of the Book, players must tactfully move their two witch tokens over the cards in the grid in conjunction with using various spell cards from their hands to peek at what lies under the cards their tokens rest on. Meanwhile, your fellow players (or perhaps you yourself) aren't going to make the hunt for the Book easy. The spell cards you have at your disposal can be used to rearrange the cards in the grid, steal information from other players, and thwart their attempts to win the game.


Find It & Bind It is meant to be lightning-fast, with games usually lasting about 30 minutes or so. Part of the game's appeal is how quickly rounds unfold, even if you have a maximum-sized contingent of four players (it can accommodate as few as two players). Not only do you have to track down the Book of Shadows and throw your friends off the scent, but you're doing all this with a fair measure of speed. That's not to say that you're actually at the mercy of a timer, just that the number of options available to you on a given turn lends itself to a brisk flow of play. Also, moving quickly tends to create a certain measure of pressure on your fellow players, which can work in your favor.

The game is also highly portable, with the vast majority of the components being cards and the space required to get few rounds in taking up only a scant few square feet. It's the kind of game that'd you'd be grateful to have in your backpack while waiting with friends at the airport or in line for a convention event.  That being said, Find It & Bind It would be just as at home on your gaming table.

As mentioned above, the game is predominately card-based; the cards themselves are crisp and adorned with richly colored examples of classical art. Fans of Van Gogh, Gheyn, and Goya will get more than a bit of eye candy in addition to fast-paced deduction, even if you should back at a print-and-play tier.

Cray Cray Games has already come up with not one, but two expansions for Find It & Bind It: the Demon and the Hexes and Relics. The former introduces the eponymous Demon who hides in the tableau and causes all sorts of mischief for the players as he attempts to bind the Book of Shadows for himself. The latter ups the ante of the base game by increasing the hand size to four cards, allowing players additional leeway to gather and deploy the titular Hexes and Relics both of which, as you may have guessed, pack quite a bit of a supernatural punch. These expansions may very well end up in the stretch goals of the current funding campaign.

Find It & Bind It has proven to be addictive with fans of deductive games and those who love playthroughs that come in well under an hour. It's a good 'bridge' game if you find yourself in the company of both veteran and newer gamers, as the mechanics are non-superficial but are also not so numerous or complex as to be overwhelming. In that spirit, the depth of strategy available will appeal to more experienced players. The title also has a robust online community, with the guys at Cray Cray Games responding to questions and clarifying rules on a regular basis via their Facebook page.

If any or all of the above piqued your interest, then check out the Kickstarter page for Find It & Bind It. The campaign will be running through March 30th.