Posted by GIR
I’ve long bemoaned the lack of classic real time strategy (RTS) offerings in recent years. The fact that Starcraft 2 is one of the only contenders in the field says a lot about the state of the genre; I’m not even talking Heart of the Swarm but, rather, Wings of Liberty. Yes, there have been some attempts with titles like Company of Heroes 2 or Planetary Annihilation, but the former focuses on strategic point control (and frankly isn’t very good) and the latter was a botched Kickstarter that enraged its backers. Sure Planetary Annihilation released eventually, but when you offer early/beta access for as high as $99 USD then discount the title as low as $5 after launch you tend to piss some folks off. With competition like that it's really no surprise I guess that Starcraft 2 remains the dominant RTS title.

Petroglyph Games takes aim to end the long RTS drought with their latest game Grey Goo, presumably named after the hypothetical end-of-the-world scenario involving self-replicating nano-machines. In true RTS fashion you must gather a resource (catalyst), build bases, and construct and manage armies while staying under a supply cap to complete objectives in the single player campaign or crush opposing players in online (or LAN) multiplayer. There are 3 factions:  Beta, Human, and the eponymous Grey Goo. Each of these possesses their own Epic Unit and, while there is some overlap between the Beta and Human, each is more varied and unique than you might suspect, with the Goo being wholly unique.

The Beta are space faring aliens stranded far from home and looking to return. They use modular hubs of varying sizes to build and power their structures as well as any subsequent add-ons (tank/artillery/air). Each add-on only confers its benefits to structures attached to the same hub. These hubs have no real restrictions on where they can be placed other than you need to have vision of an area large enough for placement. The Beta’s primary unit production structures are factories, with small ones producing single units and large ones producing three units at a time; these units can all be the same or all different and these options are based on what add-ons are attached to the hub the factory is. The Beta employ everything from foot soldiers to big stompy mechs in their fighting forces. For static base defense the Beta use a combination of walls and posts which can be mounted by some units. 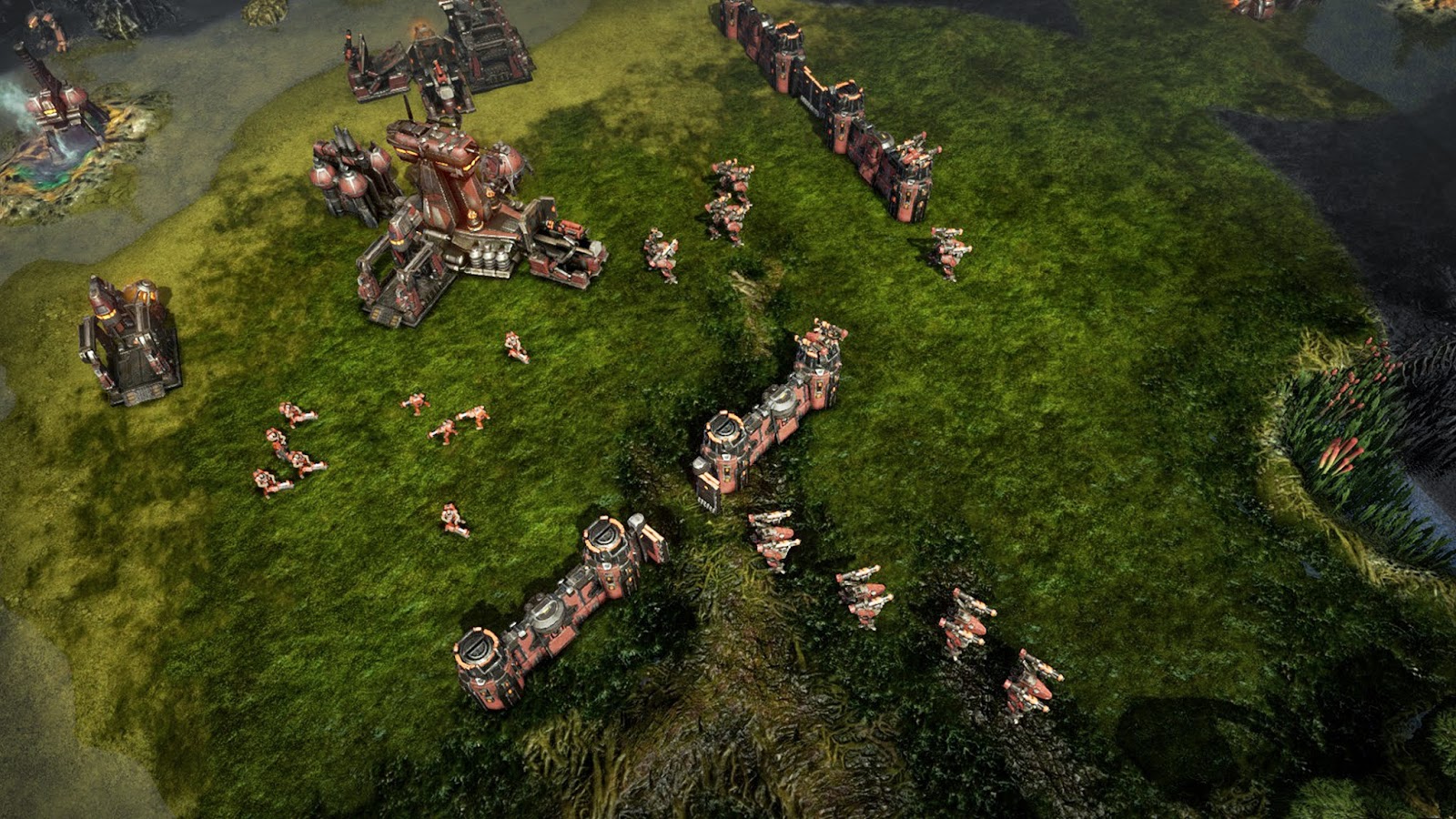 As you might guess, this faction's strength is derived directly from its adaptability and flexibility in positioning. For example, say you need to protect your base from an early rush, but all you have is infantry. You can mount them on the wall/posts and they can soak up a bunch more damage. When the enemy pulls back you're free to dismount and give chase. You can also swap what units are mounted as you please at no cost versus being stuck with, say, the wrong type of static defense.  There are also three air combat units: scout, fighter, and bomber, all which require the construction of a hanger. Each hanger can support four aircraft in a way that might remind you of  the Command & Conquer (C&C) series, rather than the Star/Warcraft series in which the number of aerial units is independent of the number of structures produced. The Betas' Epic Unit is the monstrous Hand of Ruk, a giant floating mobile weapons platform surrounded by a ring of posts, similar to those found on Beta’s walls, which can be mounted in the same manner to bolster the Hand’s already considerable firepower. 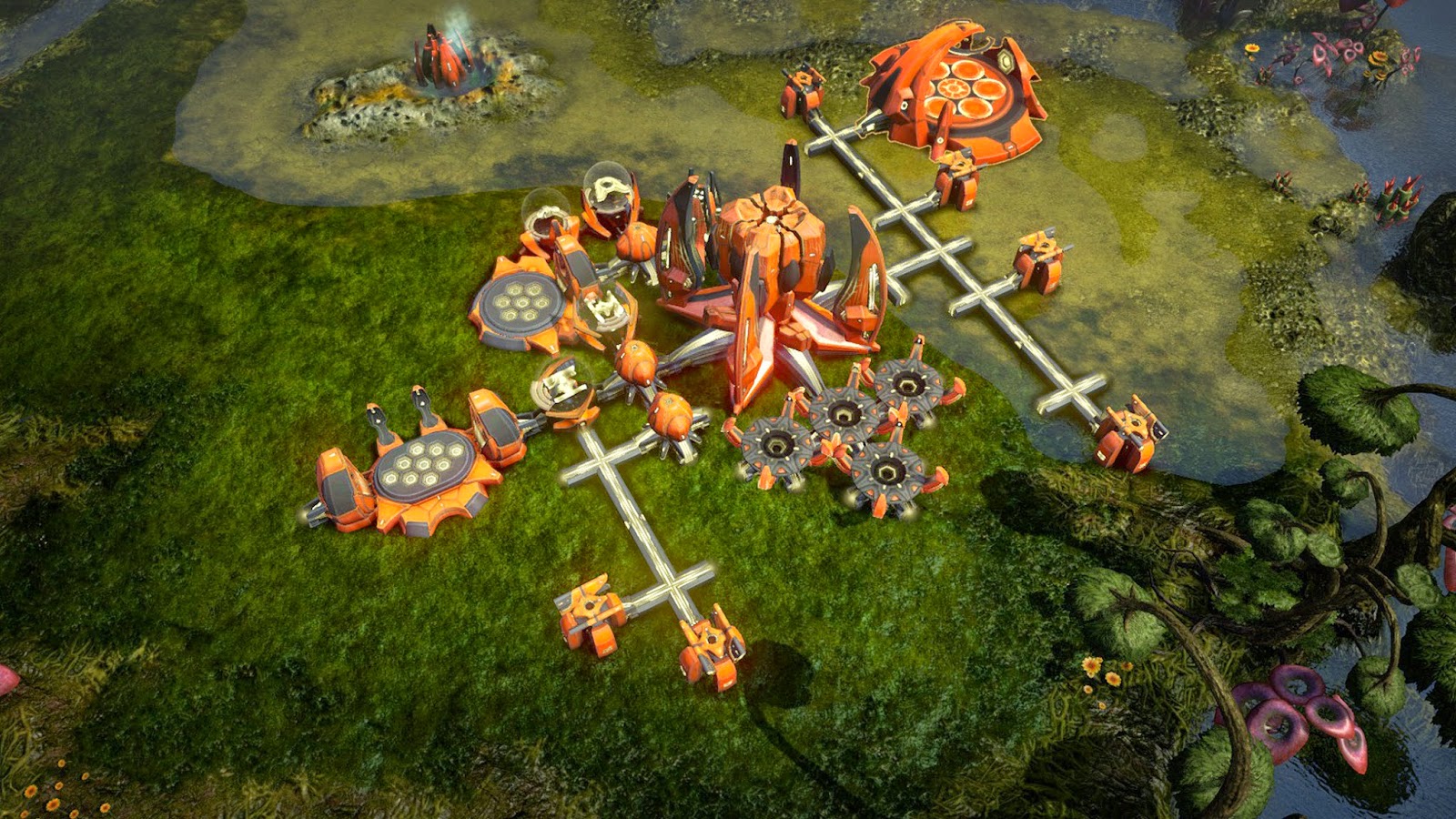 The Humans appear less Human than one might expect, as their units consist primarily of drones and fully automated defenses. Their build structure is more limited than that of the Beta in that every structure must be powered and connected to your Central HQ via conduits which act as roads/power couplings of sorts. This makes rapid expansion far more difficult than with the Beta who can build wherever they see fit. Human structures can, however, teleport to any available space as long as it’s still connected to the conduits you’ve laid down. The Humans use assembly bays, which function similarly to the Betas' factories, the key difference being that if you are careful you can have a Human add-on apply to multiple unit-producing structures where this functionality is impossible for Beta due to the shape of their hubs.

While the Beta had versatility in their base defenses the Humans arguably claim defensive superiority by virtue of their superiority. Unlike their Beta counterparts, the Humans have more traditional “turret emplacements” that come in 4 flavors:  Anti-Heavy, Anti-Air, Artillery, and Detector. The ability to safely build these defensive structures in the heart of your base and then teleport them to anywhere along your conduits can be an amazing asset and the ability to create dense clusters, as opposed to the long thin walls of Beta, make them incredibly deadly and effective. While it is true enemies can try to cut power to such an arrangement by destroying key links in the conduit network you’ve laid out, Sentinels can always just teleport to another powered section, or eventually be upgraded to function even if disconnected from the conduit network entirely. Human air units, while differing in stats and appearance, work much the same as Betas' in role (scout/fighter/bomber) and hanger dependence. Finally, the Human’s Epic unit is the Alpha: a massive construct that can absorb and redirect damage back at foes.
The titular Grey Goo - Stands? Sits?  Rests? What does a giant blob do exactly? alone. It is truly unique, not only to this game but to any other RTS I’ve played. The goo player starts with a single Mother Goo which can not only absorb catalyst like the other factions to grow, but can also absorb enemy units and structures, or even other bits of Goo as well. When the Mother Goo reaches a certain size it can break off a chunk of itself and, depending on the size of the piece you break off, you can make anything from clusters of small units to singular hulks or even more Mother Goos to explore the map and seek out more food (food being anything that isn’t already Goo). While the Goo has a tech tree and various upgrades, it does not have the same requirements and restrictions on things like the Add-ons of the other factions. All the Goo needs is sufficient material and mass to spawn whatever it is you are trying to make. There is no base-building to speak of. Rather, the Goo is always on the move, hunting for more matter and catalyst to incorporate into itself. To facilitate its endless quest of hunger, the Goo is not bound by normal movement restrictions and can cross any terrain, even that which normally would not be accessible to the other factions. With unparalleled mobility and the ability to spawn infinite copies of itself (given enough resources) the Goo is a survivor and a powerful foe that is extremely difficult to eradicate fully. Some larger Goo units can even be upgraded to create lower tier units when destroyed. The Goo’s Epic unit is the truly monstrous Purger. Made by combining multiple Mother Goos, the Purger can, of course, ignore terrain restrictions but also dish out massive area-of-effect damage at extreme ranges; its only weakness is a lack of anti-air capabilities.
But enough about the technical aspects on each faction, “How does the game play?”  The answer to that is this: similar to how you think a game would if you put C&C in a blender with Starcraft and pushed the difficulty all the way up. While the single player campaign does a good job of introducing you to the nuances of each faction as you play through each race in turn (Beta/Human/Goo), I felt the difficulty curve was a little odd. I routinely had to downgrade myself from Normal to Easy during the Beta campaign but often found I could edge up from Normal to Difficult on the Humans. Overall though the game feels challenging in a good way, as I personally feel too many games these days do too much in the way of hand-holding. One of the more interesting aspects Grey Goo has added into the equation is along with normal Fog of War and cloaked units, there are terrain features like jungle and dense brush that block line of sight and elevation effects, which allow some interesting ambush and tactical possibilities. 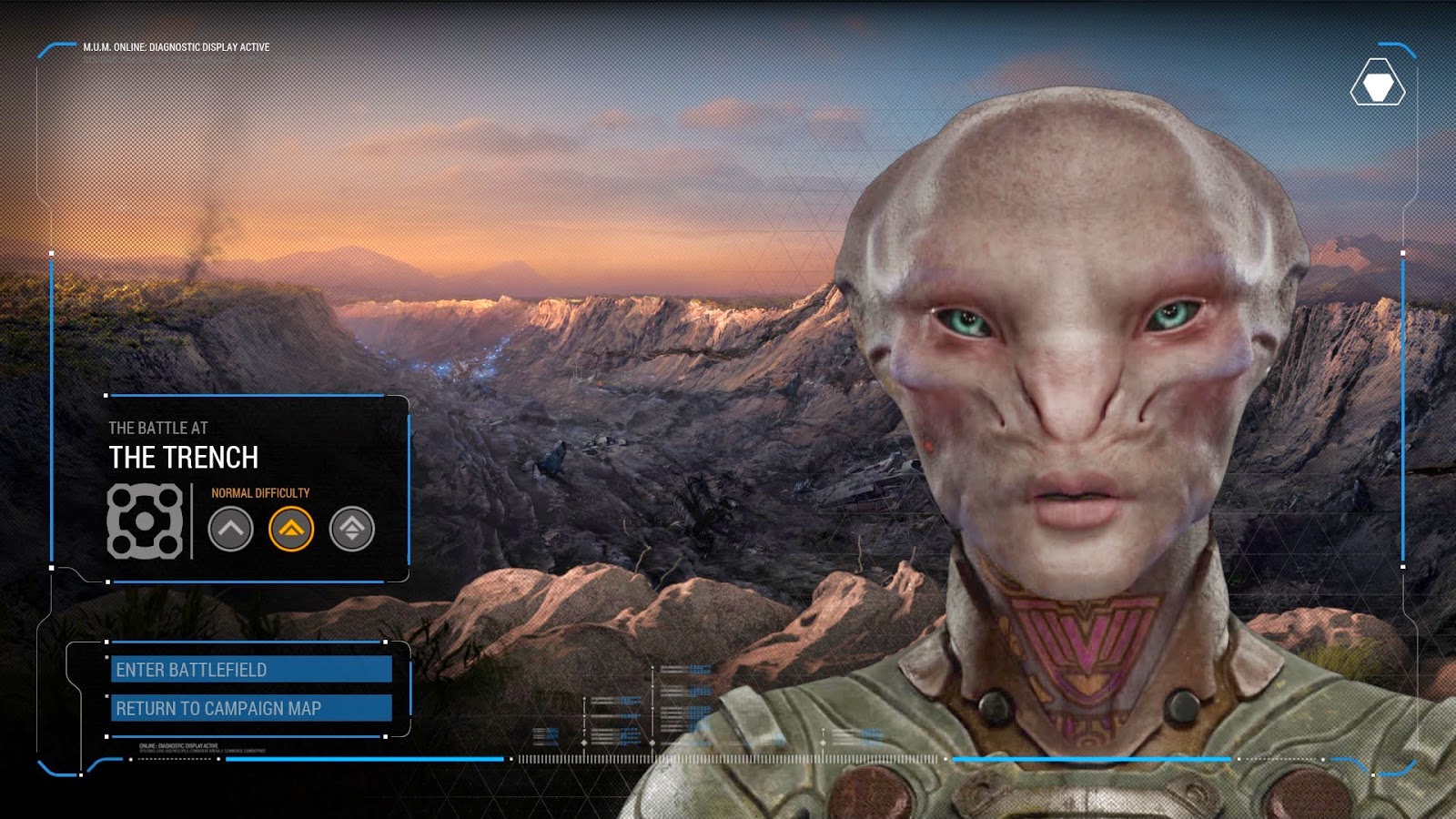 Petroglyph didn’t skimp on the frills either. Every unit for all factions has fully voiced and unique barks and, while hearing that, “Your refinery is under attack!” for the 10,000th time might get obnoxious I found it no worse than other AAA RTS titles. The levels themselves are designed fairly well and the soundtrack is pretty good. The video cut scenes, along with the fully animated and voiced mission briefings, are easily on par with anything ATVI/Blizzard can put out. The story itself isn’t the most original, but it’s enjoyable enough for a fan of science fiction and personally I enjoy the involvement of von Neumann Probes.

The campaign is not quite as long as I would have liked (5 Missions per faction from a $50 larger studio title), but the difficulty ensures it’ll take you a few days to get through it and, without getting into spoilers, it does end on a cliffhanger that implies there’s more to come. Currently people seem to still be in the learning stages and I’ve had multiplayer matches range in experience from a bumbling tug of war for control of the map to brutal routs where it’s over before one player can even find their footing. That is, when, I'm able to stay connected to all members of a match. Frustratingly, the online multiplayer is not where it should be considering this is not an Indie title/release. I'm not the only one as the Steam forums seem to have a decent number of  others complaining about similar situations or random drops and disconnects. Paradox claims they are working on a fix, but I have yet to see one implemented.


The bottom line though is that Grey Goo is a breath of fresh air for anyone who felt the RTS genre that had gotten stale on shoddy AI, lackluster single player modes, and price gouging microtransactions or DLC. Even if the story can’t hold up to the sweeping epic of Warcraft 3, the gameplay itself certainly can and does. I strongly recommend anyone who is a fan of the RTS genre to pick up Grey Goo as soon as they get the chance.