Posted by Kel
We weren’t kidding when we promised you guys loads of awesome games from indie designers. We’re going to keep up the trend of inaugural games as we go from last week’s Singaporean entry back to the members of the Game Makers Guild. Gameworthy Labs comes to us with their fast-paced, Greek mythology themed deduction game, Oh My Gods, which is the focus of a Kickstarter campaign that began earlier today.
As we sat down to play, we were immediately taken with the art of Oh My Gods. The pantheon of Greek gods is rendered as a series of detailed but cartoonish characters, effectively introducing us to the overall tone and feel of the game itself. Aside from eliciting instant smiles, we understood right away that there would be mischief afoot. As we soon found out, though Oh My Gods certainly doesn’t take itself too seriously, that doesn’t necessarily mean that it’s a game you’ll master in a minute. 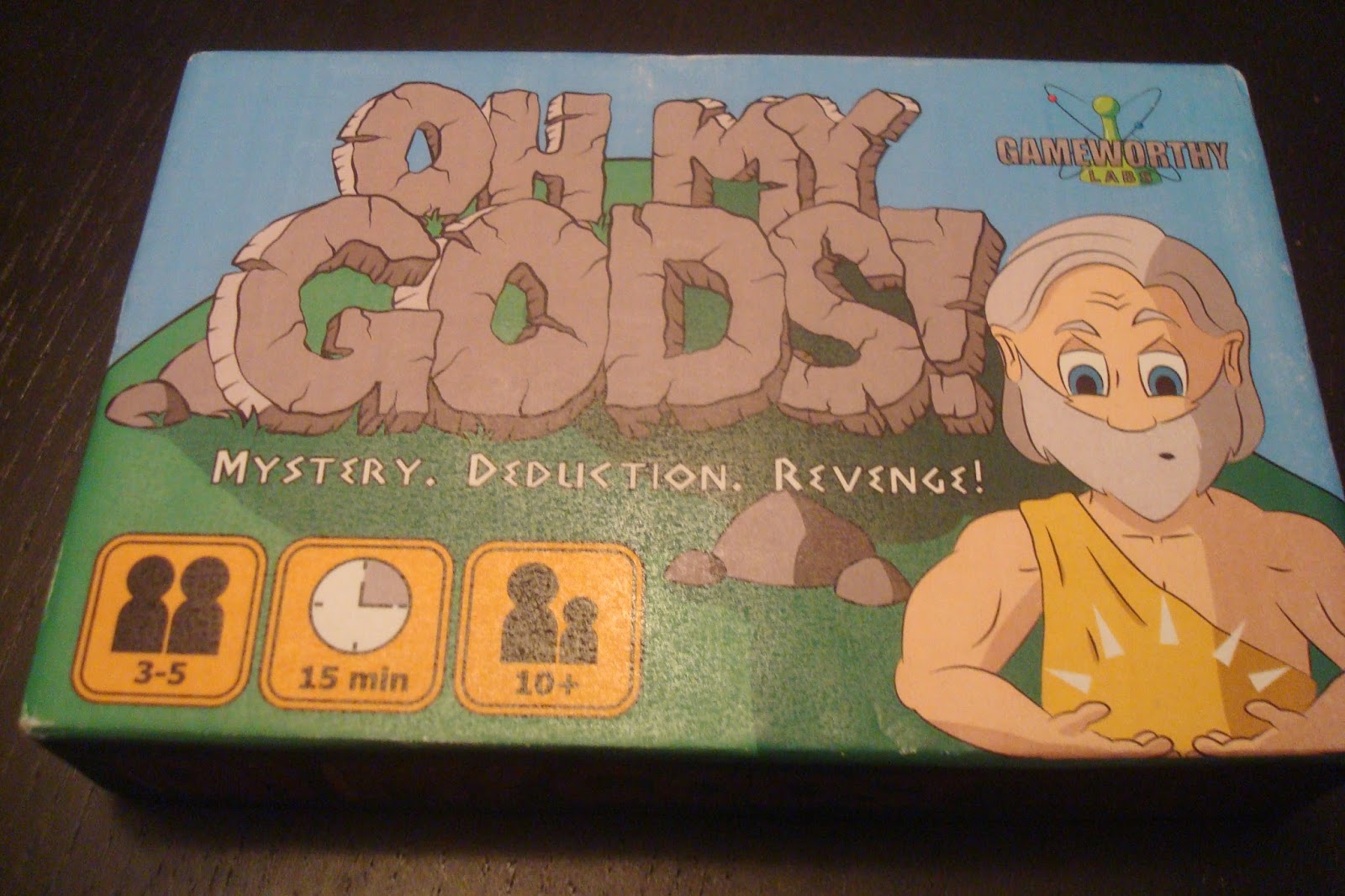 You are tasked with discerning the identity of the god or goddess that has stolen the fabled lightning bolt of Zeus. At your disposal are the following tools: a small paper grid depicting all the possible suspects, a hand of cards, a small privacy screen, and your wits. With these, you must not only uncover the thief, but do so before your fellow players can do the same.

Play is divided into three phases: searching for clues, guessing the identity of the thief, and playing a god power. To search for clues, players inquire about the cards held by the opponent sitting to their left. The inquiring player will ask to be shown cards that display certain traits or elements, as each card will display one symbol representing each of these categories. If the player who is being interrogated has a card with the requested symbol, he or she must show the inquiring player the requested card. 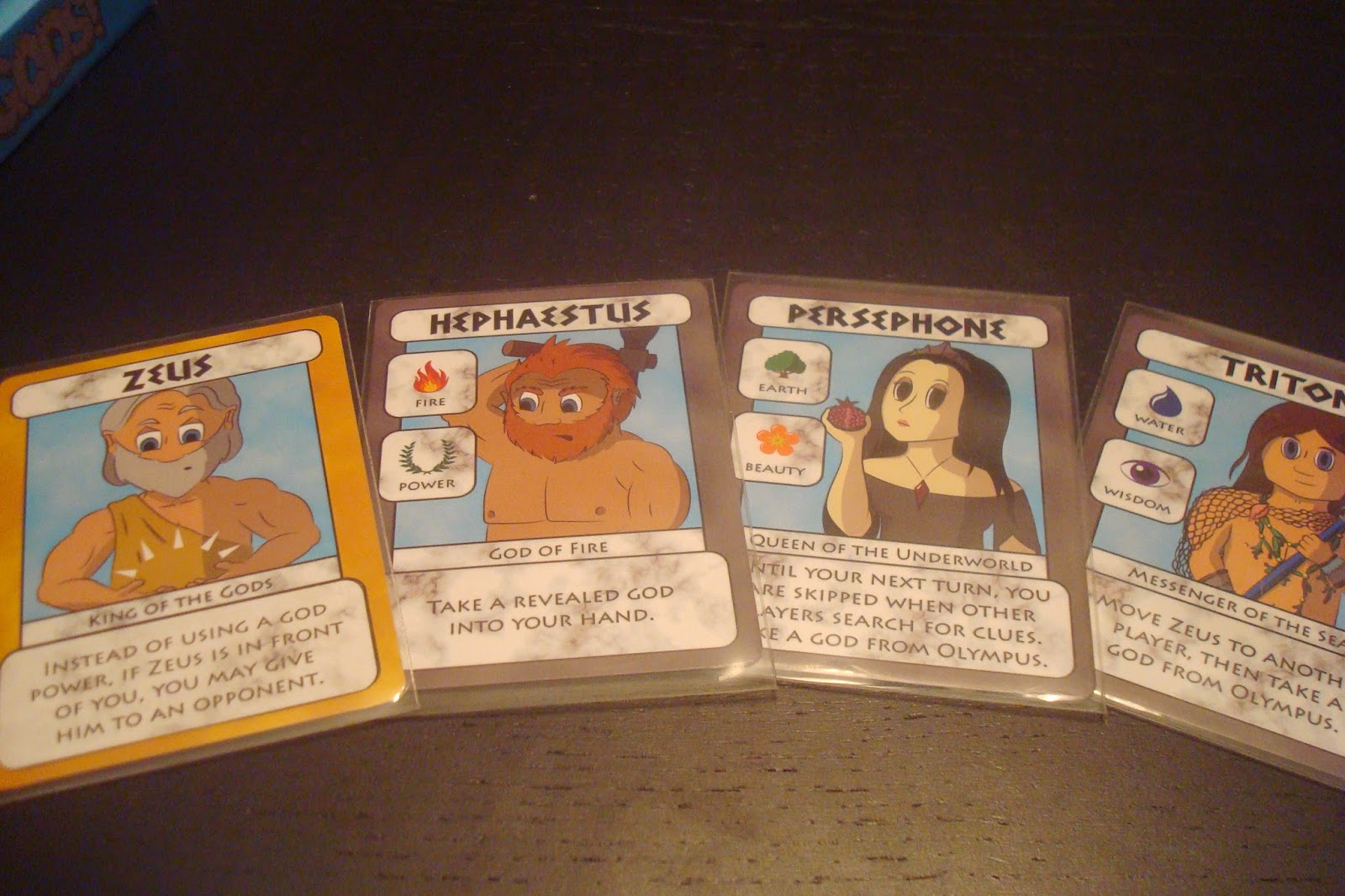 Your hand of cards is a wealth of both information and power. Each card depicts a member of the pantheon, immediately cluing you in to which of the gods is innocent (if they appear in your hand or are shown to you, they cannot be the thief, whose card is set aside during setup). Aside from allowing you to whittle down the list of suspects, the gods present in your hand possess their own unique ability: the god power mentioned earlier. These powers can range from the defensive (e.g. allowing players to forego sharing details about their hand) to the offensive (e.g. forcing players to show you extra cards from their hands) to the purely informative (e.g. allowing for a peek at one or more cards housed on Olympus).

Olympus has the dual role of font of knowledge and complication to the ongoing investigation. This home of the gods takes the form of four cards arranged face-down in the center of the table. Even if you think you've determined the identity of the thief with some expert deduction, certainty in that conclusion will elude you if you cannot access Olympus.

It's a seemingly simple premise, which, taken in conjunction with the overall aesthetics, will effectively welcome players of all experience levels (the game is recommended for ages 10 and up, which we felt was appropriate). That being said, Oh My Gods will likely satisfy veteran gamers with the depth of strategy it presents. Much of this last point stems from the individual god powers, which are very impressively balanced and attest to the enormous amount of care that went into the making of this game. At no point in our many playthroughs did we encounter a card that felt overpowered and we found ourselves repeatedly surprised at the multitude of synergies and counters that the powers presented with one another.

The game plays very quickly, as we found that our many playthroughs matched the 15 minutes per player estimate on the box, and it is also highly portable, with all of the components fitting neatly into a 6 x 4 inch box (15.24 x 10.16cm). These, taken along with the exquisitely balanced cards and fluid mechanics, translates to an extremely high replayability factor.

Oh My Gods is good-natured, tongue-in-cheek fun that will have all sorts of gamers asking to play another round. Despite its diminutive size, light tone, and brisk play time, Oh My Gods shouldn't be mistaken for 'just' a party game. It's far smarter than your average party game, but doesn't rely on mechanic complexities to convey that cleverness. This makes Oh My Gods one of those rare titles that would be  equally at home during a nerdy dinner party or at your next game night. It can also be an engaging, amusing way to bring any non-gamer friends to the table.

We had so much fun playing this game. It's a finely-honed, well-tested bit of craftsmanship that will have players alternately laughing and shaking their fists at the gods. We enthusiastically recommend Oh My Gods and definitely suggest you check out their Kickstarter today (we certainly will!).