Game Review - XCOM: The Board Game

Posted by Kel
This is a subject we've been waiting to talk about with you guys for much of the past six months, pretty much from the minute we walked away from the demo table at Gen Con 2014. After Fantasy Flight encountered some production delays and we dealt with some snow-related shipping snafus we finally got our hands on XCOM: the Board Game (and sent out the grand prize to our giveaway winner). After some deep inhalations of New Game Smell and the always-satisfying popping of chits we were ready to defend the Earth against extraterrestrial hostiles. The tiniest bit of apprehension hung in the air: were our convention memories too rose-colored or would the game be as awesome as we recalled? 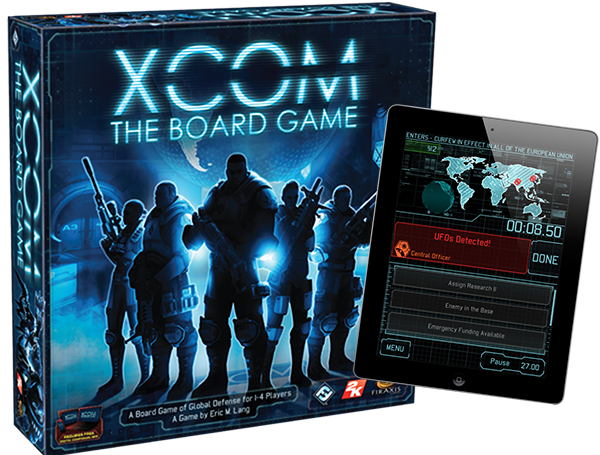 It's every ounce of what we experienced at the demo table and then some.

It's not a flawless title, but XCOM definitely delivers some of the most satisfying and addictive play we've seen in several years. Let's dive right into the details, shall we?

It's no secret that we at the Care and Feeding of Nerds are pretty big fans of the XCOM franchise. Between the three of us, we've logged around a thousand total hours if you were to sum up our time played in each of the titles in the series. So we came into the board game with a reasonably good idea of what makes XCOM feel like XCOM.

Two key components of that XCOM-y feel are a high level of tension and a near-visceral attachment to your soldiers. The board game manages to capture both of these, and does so manner that feels true to the franchise while also allowing for solid strategy and play. We’ll get to each of these in more detail in the sections below but, for now, just know that you will not be disappointed in how the game will make you feel. 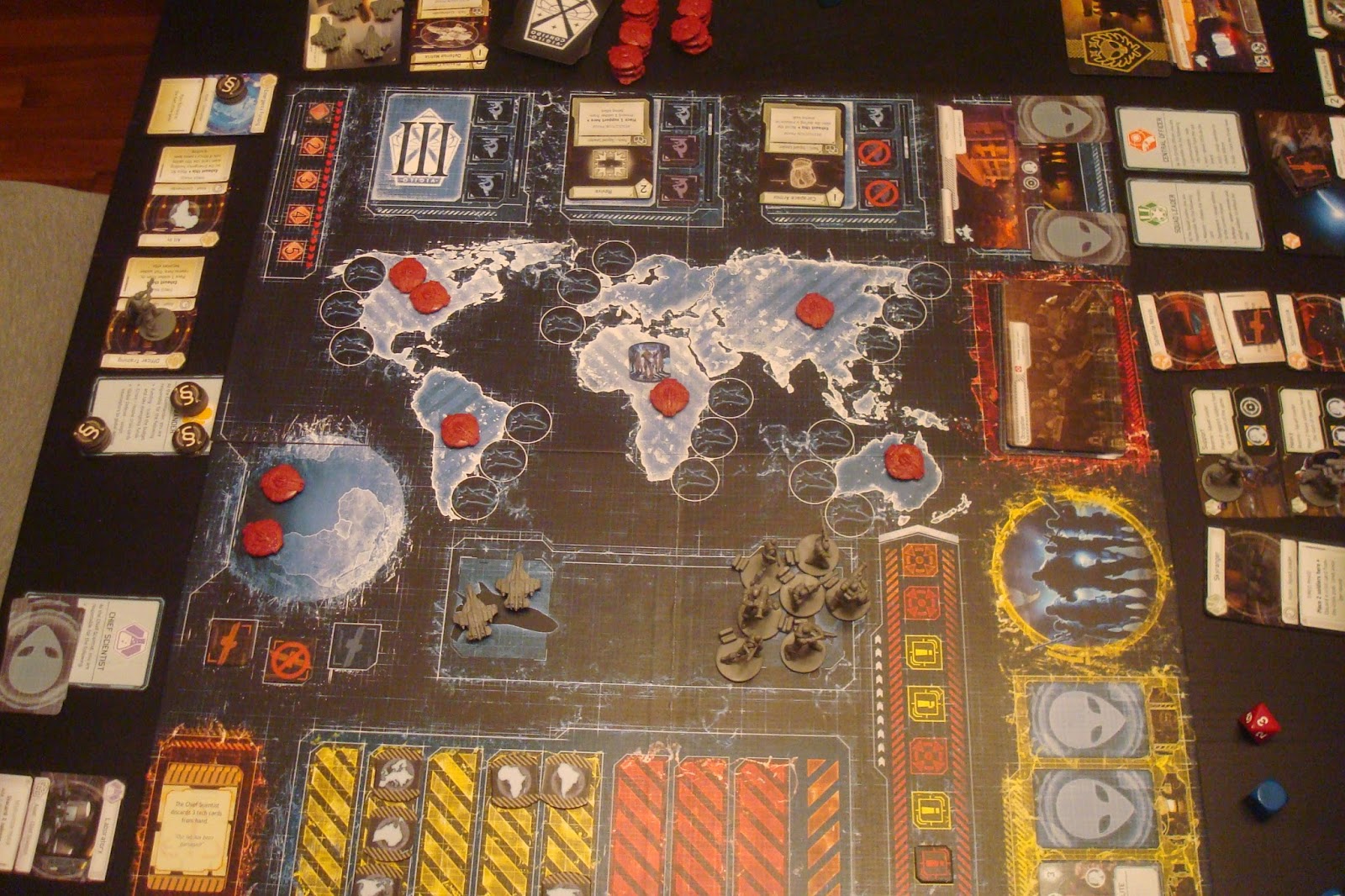 You will also not likely be disappointed either in the overall look or the physical components of the game. The board, cards, tokens, and chits draw exclusively from the grim, dark imagery of XCOM: Enemy Unknown and XCOM: Enemy Within and boast the quality that you’ve likely come to expect from a Fantasy Flight title. Akin to many of its other recent offerings, Fantasy Flight left the tokens monochromed to allow for player customization if you’re into mini painting, but the detail is still striking even if you choose to keep them unadorned.

All this translates into an immediate sense of familiarity for those veterans of the XCOMiverse. However, even if you have never played a single digital incarnation of the franchise, there’s no doubt as to the gravity of the theme being presented.

When it debuted last August, the companion app for XCOM: the Board Game instantly became arguably the most divisive topic in board games (for a little while at least). If you are one of those gamers who took umbrage at the notion of digital components in your board games, then it's highly unlikely that anything we say here will persuade you otherwise. In all honesty, we found that the app was one of the strongest facets of the entire game. 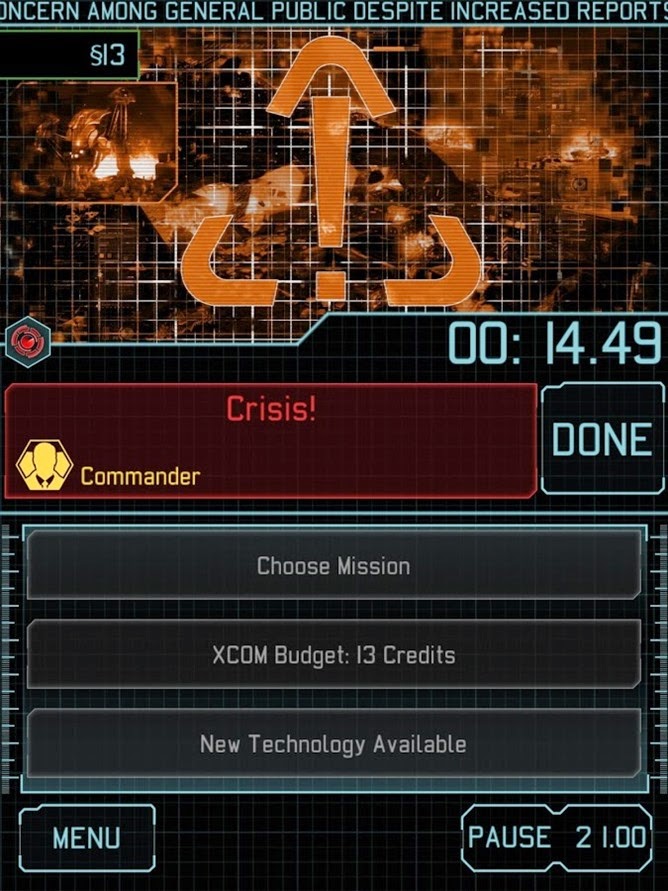 Fantasy Flight was well aware that this innovation would have to deliver a compelling, bug-free component to the game in order to have it be accepted by the masses and we feel that they were successful in this endeavor. The app is fast, free, and is the unquestionable lynchpin of any given playthrough. It’s available on the majority of digital platforms and can be played from a desktop/laptop or a mobile device.

While it was initially disconcerting to open the box and see that a brief overview was the only printed material that accompanied the game, we quickly fell in love with having a fully hyperlinked and dynamic rulebook at our fingertips. There's no flipping back and forth as you try to shed light on an in-game situation. The app does an excellent job of not only presenting the rules in a very user-friendly format, but anticipating the sorts of questions you're likely to have mid-playthrough and making that information readily accessible.

Aside from being the de facto rulebook, the app is the primary driver of actual gameplay. It presents players with setups and scenarios that are tailored to the number of participants and the desired difficulty level. It also dispenses and accounts for almost all of the action during the Timed Phase of the game, which we’ll explore more in just a moment. Lastly, it provides some of the heftier immersion points in the form of simple but compelling graphics, tactful sound effects, and a background soundtrack guaranteed to get your heart racing.

Gameplay is bifurcated into the Timed Phase and the Resolution Phase. The Timed Phase is governed almost entirely by the app, which dictates the order by which each player may act as well as provides environmental effects, like alerts that new UFOs have spawned over various continents. This portion of the game is literally named, as the app displays a countdown clock ticking away the seconds available for each player action. Just knowing that you’re under the proverbial gun creates a certain level of tension, but having a very precise timer (which displays down to the hundreth of a second) and potentially a fellow player also counting down puts everyone effectively on edge.

There may be a collective exhalation of relief when the app declares an end to the Timed Phase and a momentary luxuriating in the idea that you can take some time to digest what’s happened and formulate a plan of action before the Resolution Phase begins. The Resolution Phase is free of the merciless timer and also abides by the same schedule of events each round, as opposed to the randomness inherent to the Timed Phase. This is also where each of the four requisite player Roles get their individual chance to contribute.

The four Roles are unique functions that players take on and must be filled during each playthrough (the app provides suggestions on how to double up Roles if there are fewer than four players). You can pick from the Commander, the Central Officer, the Chief Scientist, and the Squad Leader. The Commander resolves Crises, balances the budget, and controls all Interceptor units in their battle against UFOs in the atmosphere. The Central Officer defends Earth’s orbit with satellites and relays all pertinent information from the app, as this player is in charge of whatever device you’re using. The Chief Scientist manages the research process, attempting to develop technology that will give the players a desirable edge. The Squad Leader controls all ground units, dispatching troops to various missions as well as defending the XCOM HQ.

All of the roles utilize the same dice-rolling mechanic to make the various checks required of them. The Board Game includes a set of custom six-siders representing human efforts and a red eight-sided die standing as the omnipresent alien threat. Checks require a certain number of successes, but these are tough to come by as each die has only two success icons (the remainder of the faces being stark, blank blue). Not only must players garner successes, but they must also avoid low rolls on the eight-sided alien die. Each time a player attempts a roll and does not obtain all the necessary successes the Threat Level increases, thus increasing the probability that the aliens will thwart your efforts and cause the players to incur losses.These losses can add up quickly and have dire consequences for the playthrough. Furthermore, the Threat Level heightens the existing tension by forcing players to push their luck or otherwise be forced to make very difficult choices.
Playthroughs and Replayability

The game can be played with any number of players up to a maximum of four. It also includes a single-player option which, based on our experience with the 2-player version, we imagine to be extremely difficult. Base playtime is listed at 1-2 hours, which we found to be pretty accurate.

The replayability factor with XCOM: The Board Game is very high. Between the number of missions, the customizable scenarios, the relatively short playing time, and the variable difficulty levels the game is Arkham-ish in that no two playthroughs will really be the same (aside from the tutorial). The only factors that may limit frequent play is the initial setup process (though this is far less involved than Arkham Asylum or Twilight Imperium) and frustrations stemming from repeated defeats.

And that last point is another facet of the XCOMiverse that The Board Game gets right: victories, even those on the easier difficulties, are hard-fought. Periods of stability, wherein you and your fellow players feel like you just might have a handle on things, are uncommon and fleeting. A lot of considerations are thrown at you in the frantic bursts of the Timed Phase and it may take some practice in order to devise effective strategies to optimize all four Roles. For this reason, The Board Game would not likely be a good fit for casual gamers or newcomers to board gaming. Those veterans of Arkham will know the feeling that The Board Game exudes: that wins are a welcome exception rather than the rule.

While The Board Game is solidly cooperative, one of its few flaws is the potential imbalances between the four Roles. The Roles themselves are very well defined, but the randomness of the scenarios and missions may cause instances wherein one Role is overwhelmed with activity while another Role gets left with very little to do. This sort of thing is an inevitable byproduct of a game with so many moving parts and, fortunately, instances like the aforementioned scenario would likely be limited to a single playthrough (and wouldn't really factor into games with fewer than four players).

All in all, XCOM: The Board Game is an excellent offering that will provide hours of fun for those gamers who love strategy and a solid measure of intensity in their board games. Fans of the franchise will also likely enjoy the title quite a bit. (Warning: playing The Board Game may prompt you to put in more hours with one or more of the video games.)

XCOM: The Board Game is now available for purchase on Fantasy Flight's website, Amazon.com, other online retailers, and at your friendly local game store.