GiR by GIR: Hand of Fate

Hand of Fate was a game I didn’t know I wanted or needed until after I had it. A rogue-"lite" deck building action RPG, Hand of Fate is the result of a well-run Kickstarter by Defiant Development  that originally took place back in December of 2013. Reading the first part of the last sentence aloud makes me realize why I probably passed it over at its inception. It’s really a game that sells itself better through experience than clumsy catch phrases or tags, but I plan to do my best explaining why I found it so charming and why you might too. 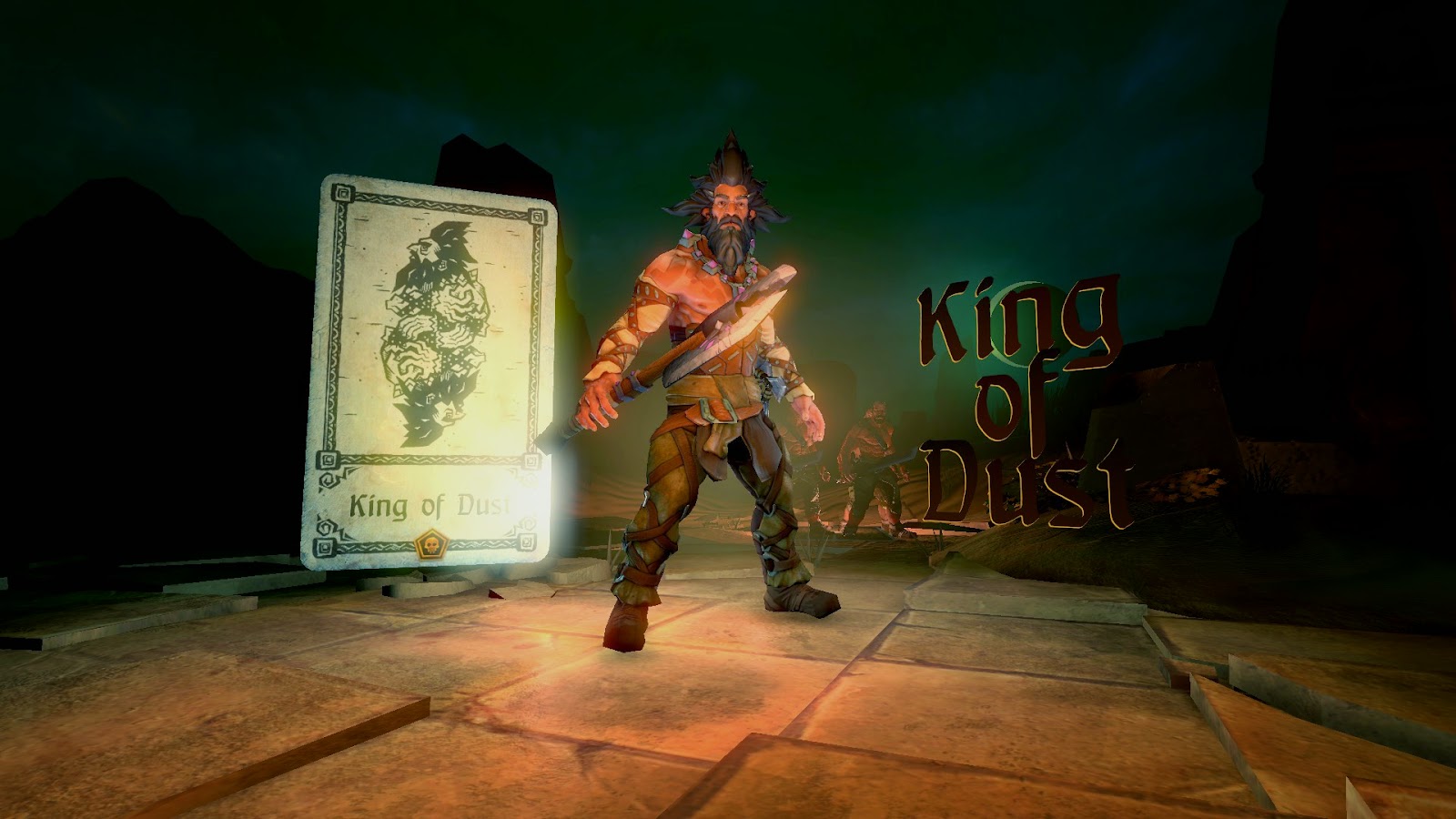 The player approaches a table where a shrouded elder who acts as a DM/Narrator beckons you with a deck of swirling cards. These cards are the primary source of interaction in the game. Each session will begin with the Narrator shuffling the cards you have chosen, as well as add in some of his own. The cards are then laid out in a random pattern to create the board on which you’ll move the player token towards the ultimate goal of finding the Boss at the end of a zone. Defeating said Boss allows the player to claim a trophy, which provides various benefits such as new cards and stat boosts. As you progress through the central story and unlock cards you’ll eventually be able to customize the Reward and Encounter Decks how you see fit, though I tended to stick to the “Recommended Configuration” for the most part. 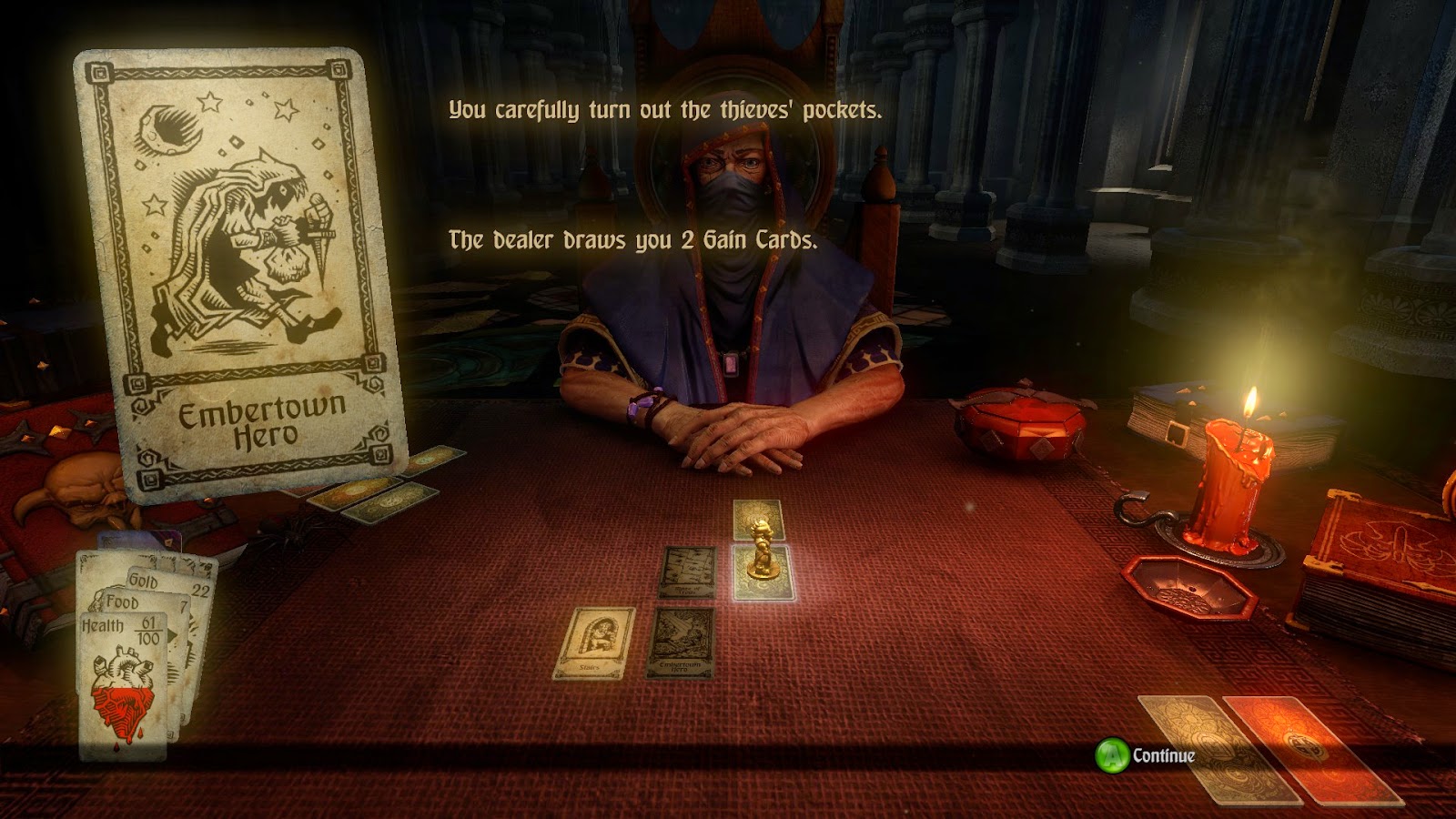 As you explore and flip over cards, the Narrator will describe the consequences of your actions. The cards can be anything from finding equipment, gold, or much needed food, to side quests, mazes full of traps, or monster ambushes. Various vendor cards seem common enough, allowing the player to spend gold or sell off excess gear for upgrades, remove curses, or grant blessings, some of which seemed more useful than others. 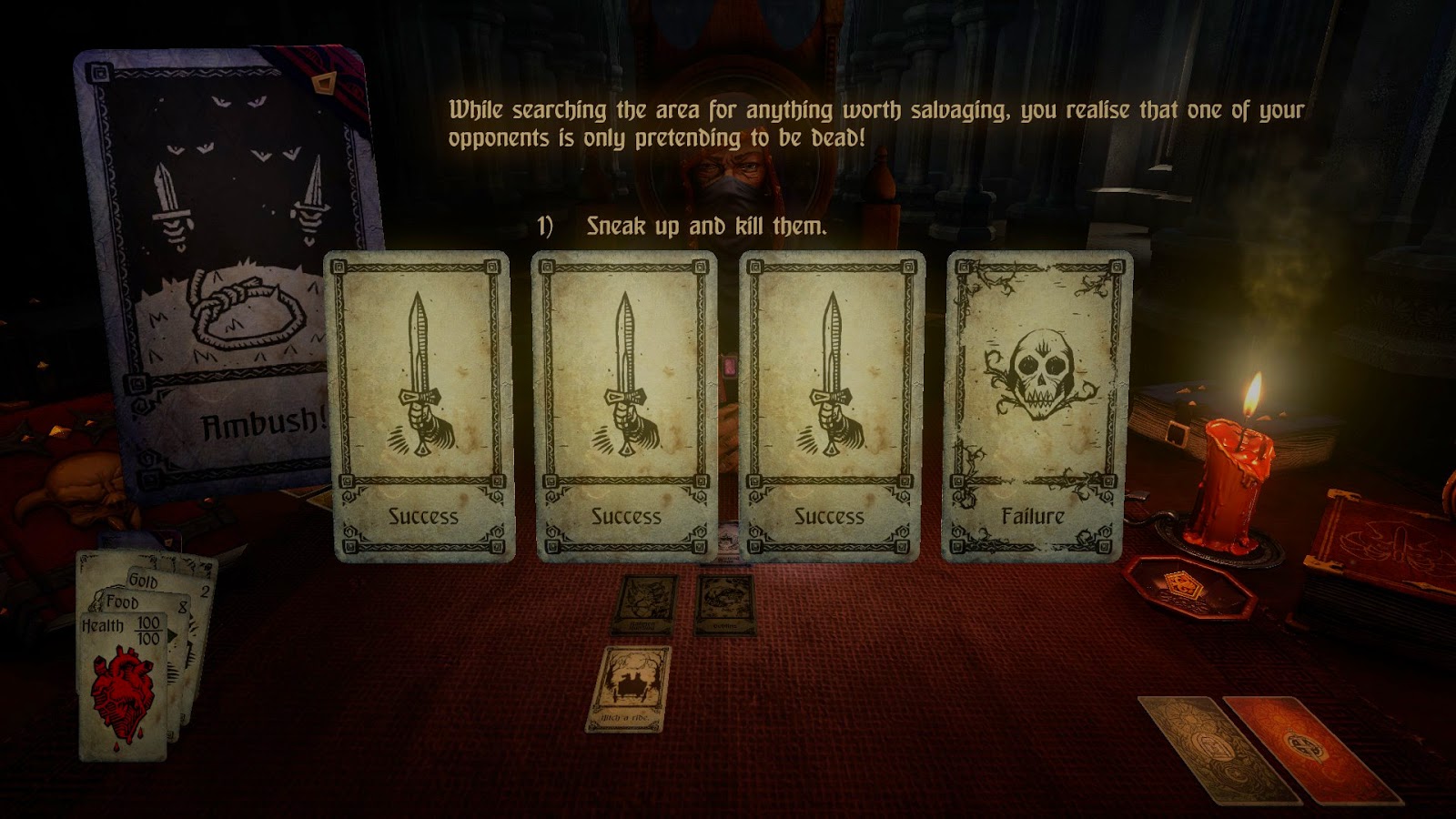 Some encounters will be resolved through picking the correct card out of a face-down line up at the Narrator’s table, but often these revealed events will lead to a real-time action segment. The player will be dropped into a third person setting and tasked with hacking, slashing, and running their way through a simple combat map or maze. I was slightly disappointed in how small some areas were as each setting I found was lush and vibrant with color and detail. The action elements are lifted heavily from your typical Batman/God of War/Sleeping Dogs type games: one button to attack, one to counter when you see the indicator, one to dodge roll, etc. So the combat mechanics are serviceable , but not as unique or rich as the presentation Hand of Fate had provided for the game as a whole. 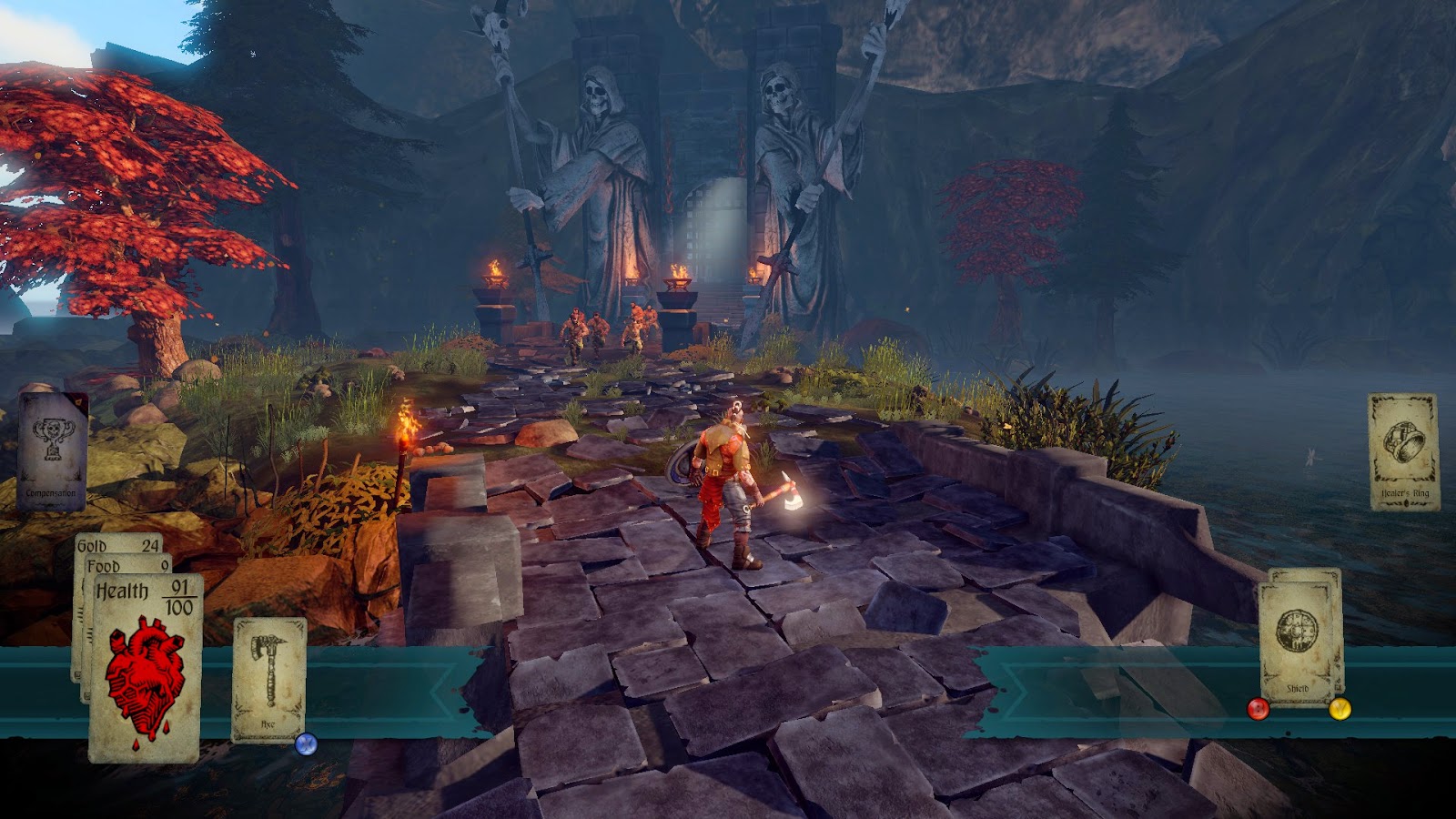 However, I quickly learned that, while combat wasn’t exactly difficult or taxing for anyone familiar with action games, the thing most likely to kill you was Starvation or the Narrator’s Punishment cards. Every new card explored uses food and though successfully completing a card event often grants Rewards (which MAY contain food) there is no guarantee you'll get what you need. 150 gold isn’t really helpful when you only have 2 apples left with a dozen or more cards left to reveal before you may advance. Even if you manage your resources well, you never know what consequences there can be when the Narrator draws Punishment cards for revealed Failures, or the dreaded Huge Failure, which, at one point, dropped my food and health reserves to low single digits on what was otherwise a flawless run. This is, of course, to be expected as Hand of Fate is a rogue-lite. That said, I use that term because, even through Huge Failures or a gamble that turns out poorly, the cards you unlock on any given run remain in your collection at the end, to be incorporated into your encounter and rewards deck for future use. 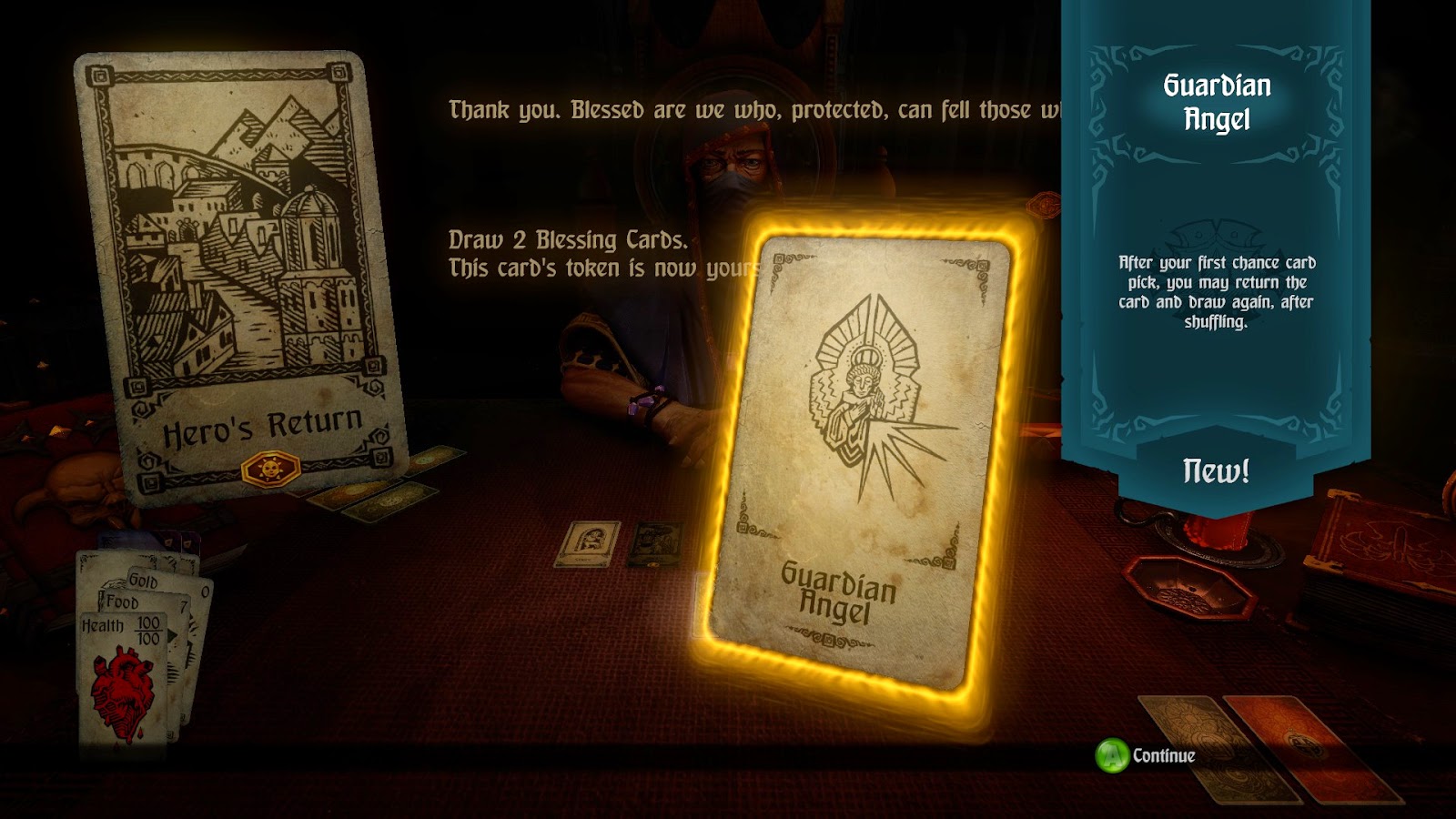 The unique blend of ideas coupled with wonderful presentation won me over in the end and took some of the sting out of the harsh rogue elements. While some players might find themselves ground down by frequent failures or slightly repetitive nature of Hand of Fate, I found it no worse than FTL or Rogue Legacy. If you missed the chance to back this on Kickstarter, like I did, the full release is out now on Steam for $20 until 2/24 (after that it jumps back up to $25) and is well worth the price in my opinion; so go ahead and tempt fate! (I’m sorry, I couldn’t resist)

*Hand of Fate was reviewed on PC using a controller, but is also slated to release soon for PS4, Vita, and other platforms.