Cosplay: It's All on My Belt

Posted by Kel
Looking back on all the previous costumes that have been featured on site, we've comparatively spilled quite a bit of digital ink on Steampunk Hawkgirl, so it's a little bittersweet that her series is coming to an end. If you're just joining us now, you can see how the corset, the leggings, the giant feathers, the mace, the Worbla components, the wing harness, and the wings themselves came together by following the links. This final installment covers a critical, if not-so-very-glamorous component of the outfit: the utility belt. 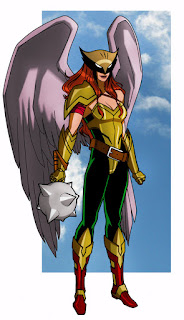 Wait, how could a belt be so important?

Because, you see, the belt in this costume does far more than act as a repository for your badge and hotel key. The utility belt is the primary resting place for your wing harness and thus supports almost all of the weight of the wings themselves.

But isn't the wing harness almost like a backpack? Why not just let it hang from your shoulders?

Even though the wings were designed to be as light as possible, carrying anything around for an extended period of time gets uncomfortable. The idea is to minimize that discomfort by having the weight of the wings be borne by as many different points as possible. Your waist and hips end up being ideal for this task, as they not only provide a fair amount of surface area, but are inherently designed to be load-bearing (after all, they carry your torso around pretty well). Your shoulders will end up helping out, but having them play proverbial second fiddle to your hips will do wonders for the stability of your harness and your overall comfort level while you're walking around in costume.

Since the belt had to do some not-quite-heavy lifting, it needed to be made from a very sturdy material. The easiest way to ensure that the belt can do its job is to start with a piece designed to do similar work. After a bit of research and a lot of combing through the virtual aisles of Amazon, I came upon this weightlifting belt that seemed as though it would be up to the task. Weightlifting belts are a good choice for this sort of sartorial role not only for their supportive capabilities, but because they usually come in both a variety of styles and very neutral colors. What they also tend to come with, however, is a bit of a glazed finish on at least one side of the belt. If the color or the glazed finish on the belt don't meet with your costuming needs, you'll need to chemically strip one or both of those things off of the leather. Fortunately, that process is fairly easy; all you need is a bottle of this, a well-ventilated area, some elbow grease, and time.

Once I'd gotten the belt to a raw, as-unfinished-as-possible state, I covered it with a mixture of acrylic paints to give it a deep reddish-copper color. If you're in the process of making this utility belt using these same methods, don't panic if it takes you 3-5 coats of paint to get the belt to the color you want. A layer of gold-brown fabric paint sealed in the acrylics and gave the belt a nice matte finish, as steampunk is generally all about mostly-muted surfaces.

After the belt was the desired color, I added two of these weightlifting hooks onto the broad portion of leather that sat across the back of my hips by drilling through the belt and hanging the hooks with four of these rope clips (two clips per hook). I used a drill bit designed to punch holes in metal for this, but ended up having to carefully expand/finish the holes using one of the sanding bits on my Dremel. Determining where to hang the hooks was largely a bunch of trial and error, holding the wing harness up to my back while wearing the belt and adjusting until I was happy with the position. As a last step, I installed two slightly smaller versions of the rope clips into the front of the belt to hold the ends of the shoulder straps for the wing harness.

That gave me a solid utility belt that did pretty much everything I wanted it to (I'd wanted to add small pouches to give the belt, but ran out of time). The wing harness rested easily on the 'shelf' of the two weightlifting hooks and got additional support from the pair of shoulder straps attached to the rig and anchored with the rope clips on the front of the utility belt. Between those two sets of contact points, the rig was definitely secure and there were only one or two points during the day when I had the costume on where anything felt even a smidgen out of place.

The last bit of utility in the utility belt is as a fixation point for the paracord that opens and closes the wings. It only took a few minutes of walking around the halls of the Indianapolis Convention Center to realize that almost none of my fellow con-goers wanted pictures of the wings while they were in a closed position. To cater to this (and minimize wear-and-tear on the wings), I propped open the wings by extending them fully, then threading the draw cords down through the corset to wrap once around the belt itself, then anchor in the rope clips at the front.

Whew! So ends the series on Steampunk Hawkgirl. She was certainly a challenge, but I'll almost certainly be using or working to upgrade almost all of the components for a future convention. Now, on to Halloween!