Posted by Kel
It's September? Seriously? Whew. It's entirely possible that I'll just never catch up with this year. We're in the process of gearing up for our last convention of 2015: the Boston Festival of Indie Games, which promises to be bigger and better than ever before. It's one of our favorite days of gaming and we'll be giddily bringing you all the highlights live from the campus of MIT via our social media pages. As always, we'll also bring you a full recap of all the fun in the week or so following the convention. In the meantime, let's get down to the Week in Geekdom. 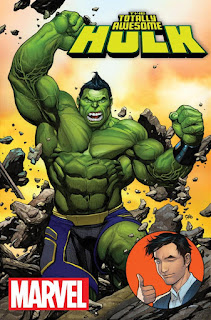 We're going to get a brand-new incarnation of the Hulk this coming December (it'll be a big first for Marvel!). Here's a sneak peek of what you can expect.

The season premiere for the fourth season of Arrow is almost exactly a month away, but producers are taking pity on patient fans of the show by releasing images of John Diggles' new costume.

The International Federation of Film Critics agree with our collective assessment of Mad Max: Fury Road.

That collective excited gasp you may have heard this past Wednesday likely stemmed from fans of Doctor Who as they learned that River Song will be making an appearance in this year's Christmas Special.
Marvel has made it clear to Chris Evans that they would like for him to continue playing Captain America into Phase Three. Chris Evans would like Marvel to know that he's more than ok with that.

We will definitely see Captain America in the upcoming film Civil War, but we won't be seeing any of Mark Ruffalo's the Hulk.

It sounds like something a Bond villain would unleash upon the seas: a poison-injecting submarine. Turns out this fiendish-sounding vehicle is not only real, but is a mechanical ally to coral reefs.

What would happen if we were to spontaneously 'grow' a fourth spatial dimension?

We've already talked a bit about Japan's preparations for the 2020 Olympic Games (holy artificial meteor shower Batman!). Now we have a few more details concerning these efforts. The Japanese Fire and Disaster Management Agency is working to create a speedy and accurate translator app that will assist medical crews if they have to attend to any emergencies during the Games.

Who knew light was so squeeze-able? The latest edition of Nature includes this research from St. John's College at the University of Cambridge that indicates individual particles of light can be 'squeezed', or brought to the lowest possible level of active electromagnetic activity.

'Heart in a Box', this device that keeps donated hearts alive and beating after they've been removed from their donor, but before they can be transplanted into a new patient, may just revolutionize organ transplantation as we know it.

At first glance, these pieces seem like they may just be computer-simulated images. They are, however, completely real works made entirely of glass. Bonus: they were 3D printed in glass using hybrid printing/glass blowing technology developed by researchers at Harvard and MIT.

Yes, we are eventually going to get a feature film starring Boba Fett, but a fan may already deliver that bounty hunter fix you're after with this film trailer.

The Nerdist talks bluntly with Sir Patrick Stewart in this excellent podcast.

It's one of the most enduring questions in sci-fi (or cinema for that matter): why are Imperial Stormtroopers just so terrible at firing their blasters? Adam Savage of Mythbusters fame feels he may have an answer for us.

It took only a handful of seconds for a certain round orange robot to capture the hearts of Star Wars fans around the world. Want to know more about BB-8? Here come the details.

Not enough adorable droid for you? Here's the commercial for the way in which you can own your own BB-8.


The world's tallest arcade game will make you, the player, feel positively child-like.

As always, best wishes for an amazing week ahead!