Cosplay: the Thing With Feathers

Posted by Kel
We are under two weeks out from Gen Con 2015! Holy mother of the Avatar. Aside from the flurry of preparations, the last-days-before-a-convention nightmares have started in earnest. You know the ones; you arrive at the convention woefully unprepared or having forgotten/lost/broken some critical component of your cosplay kit. Those are just going to be a regular feature of my sleep cycle for the next couple of weeks. Fortunately, the construction process is well in hand, so we can chat a bit more about Steampunk Hawkgirl and how she came together. If you’re just joining us now and would like to catch up, you can read about the corset, the leggings, the worbla bits, and the wing fundamentals using those links (though, honestly, the order in which these are read doesn’t matter especially much).

Today we’re going to cover how to make the feathers, how to attach them to the ‘bones’ of the wings, and how to get them to fan out like those on a real bird’s wing. Fair warning, there is a LOT of repetition in the building of this part of the costume, so your best bet is to line up a good TV series, movie marathon, or excellent song playlist to keep you company. 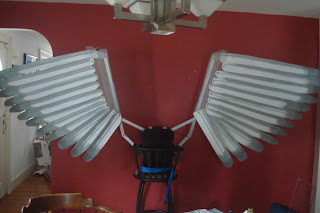 As you can imagine, keeping the feathers as light and mobile as possible is the name of the cosplaying game. There are a couple of ways you can accomplish this: making the wings out of canvas or similarly sturdy fabric, out of paper or cardstock, or out of foam. After some initial experimenting, I chose craft foam, as it was both lightweight and could hold a shape nearly of its own volition. What you end up selecting will likely depend on what your wing ‘bones’ are made out of and where you plan to place your feathers. For example: wings that center on your actual arms can bear canvas feathers quite beautifully. If you do end up also choosing to use foam, I'd recommend getting at least three rolls of approximately this size to ensure you have enough for this project.

Once that decision had been made, it was a matter of actually making the feathers. To do this, I laid one of the wings out on the floor in its fully extended position. I then cut a roll of easel paper into 3” x 36” (7.62 x 91.44 cm) strips and arrayed the strips over the wing in a fan-like pattern, then trimmed them into varying lengths to mimic a real bird’s wing. This process was repeated with a second layer of feathers 2.5" x 24" (6.35 x 60.96 cm). Once I had a full “set” that covered all portions of the bones as I wanted them to, I copied the designs onto the craft foam twice so both wings would mirror one another. I ended up making a handful of wider feathers for the very bottom of the wings to create a more organic overall appearance, but it's entirely up to you if your project will have need of these. 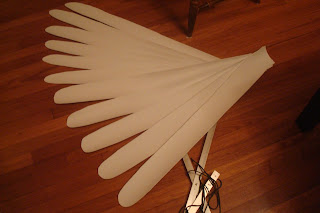 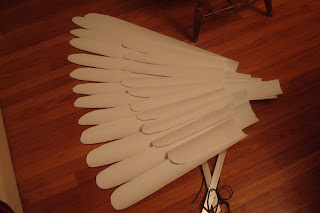 With the future wing covers in hand, thus began the long process of turning plain white foam strips into something that actually resembled feathers. After priming everything with gesso, I used ordinary hot glue to apply 1/8" (0.32 cm) dowels of balsa wood to each strip, then painted them with acrylics in the patterns I wanted. The dowels are necessary if your feathers are close to the dimensions I used in order to provide a bit of structure; omitting them will result in floppy feathers. As mentioned earlier, this process can be extremely time consuming, so a good bit of background noise will likely be very helpful. 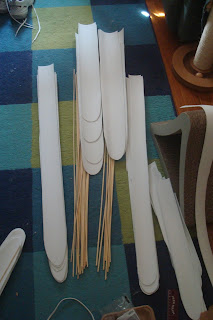 Once all your feathers have been painted and buttressed you can begin mounting them to that they lay against the bones. The way I did this was to cut this aluminum screening into two strips 28” x 10” (71.12 x 25.4cm). The aluminum provides a sturdy surface on which to hang your feathers without adding too much weight to your rig. I bent the strips around the primary vertical bones of the wings, then held up each feather to where I wanted it to rest, marking the screen at this point with a sharpie. Using the punching tool from this kit, I cut 1/4” (0.64 cm) diameter holes into each feather and, with the help of a pair of tin snips, did the same at the sharpie-marked points on the screen. After that, it was a matter of aligning the holes in the screens and the holes in the ends of the feathers and joining everything together with some of these grommets. The grommets are also lightweight and allow the feathers a degree of movement if you’d like them to fan out or otherwise deploy. This whole process was repeated with the second, shorter layer of feathers.

Once all the foam had been attached to the screen there was the small matter of ensuring that the feathers would stay open and beautifully fanned out. To accomplish this, I joined each feather to the one above and below it with some carefully tied (and painted over) lengths of fishing line. This process is also extremely time-consuming, but definitely worthwhile as the finished effect is stunning. It also helps spread out the weight of the wings over the full surface of the 'bones' so you minimize the potential for stress-related snafus during wear. 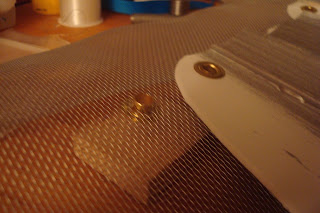 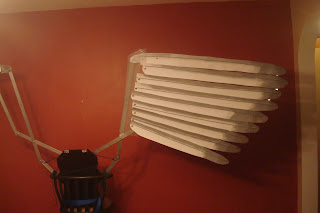 Over top of the screens I molded a few strips of Worbla both to cover the former and to create a metallic, steampunky effect on the wings themselves. For the basics on how I worked with the Worbla, visit my earlier post on what thermoplastic can do for you. For pieces this long, however, it can be useful to work in small sections at a time (though it can be tricky to ensure that all sections are heated evenly as a result). Also, these steps were necessary for my particular project, as I needed the wings to be able to break down so I could ship them out to Indiana ahead of Gen Con. You can experiment as you see fit, especially if you’re ok with your wings having a more permanent configuration.

After the Worbla had been added, it was just a matter of priming it with gesso, painting it, and adding fun details to make it look like real metal. Just a heads up: Worbla is not at all a lightweight material even before you add things like primer and pain, so if you’re planning on adding any details to your wings it’s a good idea to keep them to a minimum.

We're almost to the end of this series! See you guys in the next installment!