Cosplay: Who Wears The Pants?

Posted by Kel
Say what now? Costumes…in November? In all honesty, costumes have been all but shunted to the proverbial back burner for almost a month now. The combination of implementing the (hopefully) fun changes to the site, the approach of the holiday season, a deluge of new games, and a bit of delayed burnout from the marathon of costume construction this year has left me quite content to shelve the sewing machine and hot glue gun for a bit. I’m normally big into planning, so it was a bit of a guilty pleasure to procrastinate. You’ve got some time…those conventions aren’t even until next year.

Last week provided an abrupt reality check in the form of registration for PAX East 2015 appearing out of the Twitterverse blue. Not only is PAX just over 100 days away, but registration for Gen Con 2015 is even sooner. We’re in the very, very early stages of planning what has the potential to become a seminar at Gen Con, but we’ll produce more details on that if it should come to fruition. The GIR and I are also pulling out all the stops to try and ensure that we avoid the housing nightmare that we encountered last year; fingers crossed that those efforts work out.

In the meantime, there’ve been bits of progress on Steampunk Hawkgirl that I haven’t had time to sit down and write about until now. So let’s catch up! 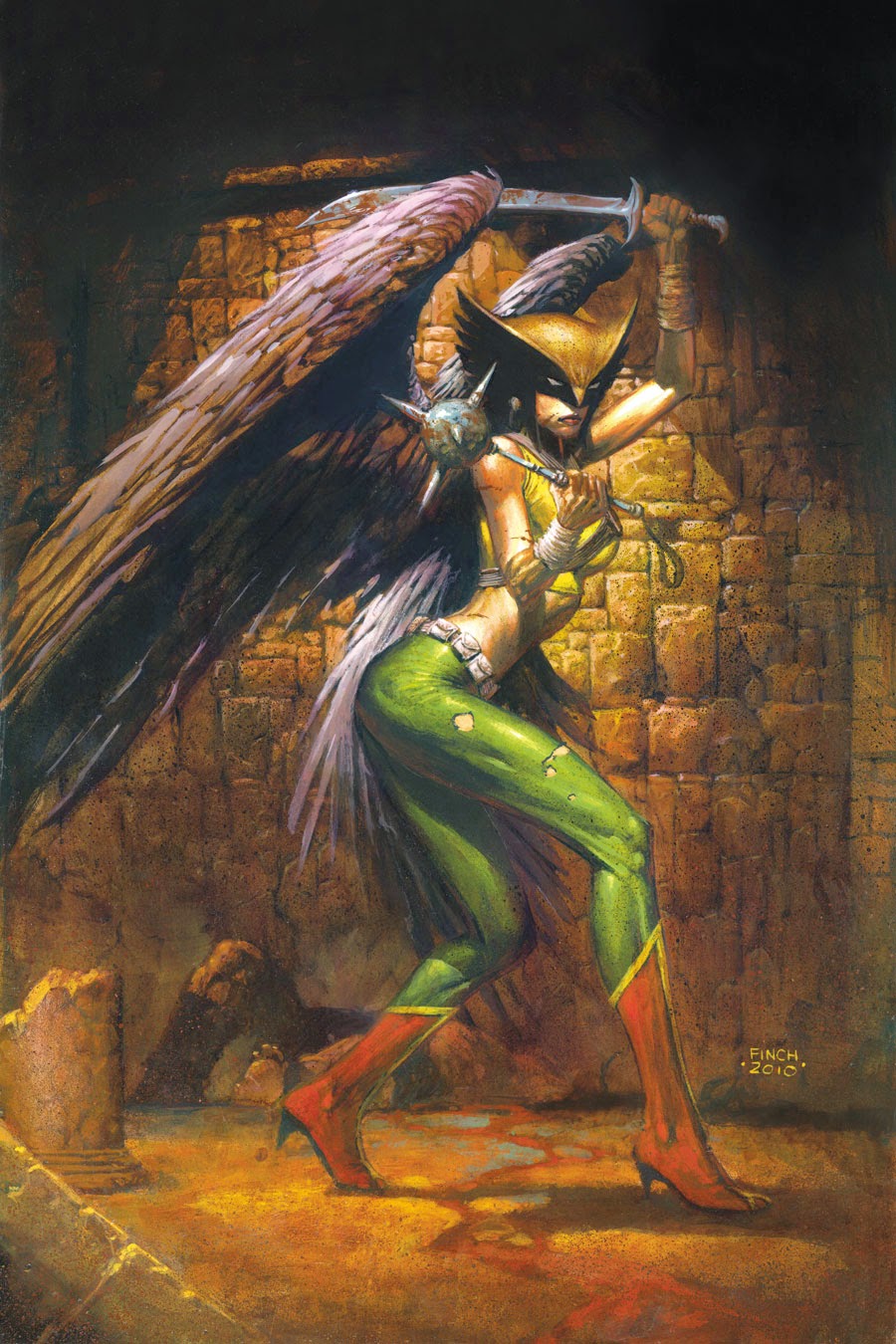 After completing all the structural tests for the wings I took some time away from physically crafting just to sit and brainstorm. With one exception (my books-version Daenerys Targaryen, which pre-dates the blog), all of my costumes have been a direct reproduction of a character from visual media. This was primarily due to the fact that, most of the time, I’m a purist who defaults to the original source material. The other reason why I tend to go the purist route is because I cannot draw for the life of me. Seriously, cannot draw to save my life. So, by necessity, all costumes go from conceptual to physical reality in one step.
While there are a handful of images out there for various imaginings of a steampunk version of Hawkgirl, they vary considerably from one another and, to be honest, I wasn’t in love with any one iteration. So there was copious daydreaming and a lot of scrolling through Pinterest before the shell of an idea began to form. I focused on the individual pieces that will be the foundation of the costume, then slowly worked outward from there. As of now, those individual pieces consist of leggings, boots, a corset, a bolero of some kind, and a helmet. Since every piece of this costume is being made from scratch, almost all of those pieces will probably get their own post in the not-so-distant future.

The first item to go from brain candy to wearable garment were the leggings to be used in the costume (the second item is the corset that will serve as the base for the wing harness). I chose leggings over a skirt for two reasons: 1) Nearly all depictions of Hawkgirl show her wearing some sort of pants and 2) I don’t know how the final version of the wings are going to lie relative to my back and legs; pants guarantee a bit of protection from potential feather-derived irritation. I may add a bustle over the leggings later on, but that will depend entirely on how the wings turn out.

Making leggings is fairly straightforward, definitely easier than sewing, say, a catsuit, and you can make lots of fun derivations with very minimal changes to a given pattern. Speaking of which, there are quite a few excellent patterns out there to choose from. Butterick B5788, Kwik Sew 2797, McCall’s M6173, and McCall’s M6404 are all fairly easy to find and are fairly cheap. If, for whatever reason, none of these fits the scope of your project, this website provides a comprehensive set of tools for creating your custom pattern for leggings (bonus: it’s completely free).

I’m anticipating that between the wings, the mace, and whatever headgear I end up making, there’ll be a lot going on visually in the top half of the costume, so it would probably be a nice contrast to have the bottom half be a bit less busy. To make the leggings interesting while still harmonizing with the rest of the outfit, I wanted to include a few strategically placed complementary fabrics.  I selected McCall’s M6404, then ended up making some edits to the pattern to get the blend of textures and colors I wanted.

The end goal was a modified version of the pants you see over on the right. They provide an excellent foundation for other pieces, directing the eye efficiently without being bland. The colors needed to be a bit less saturated for the leggings to be steampunk, as the genre tends to feature muddled, subdued hues. With that in mind, I chose this fabric (in 'Hunter') to be the base, with this olive color and this burgundy faux-leather to serve as the accents.


Once the fabric arrived, it was largely a matter of measuring, cutting, and arranging the cloth to lie how I wanted it to. If you’re using a commercial pattern it will list the exact measurements you need. Commercial patterns for leggings usually also include guidelines for how to scale the pattern based on both your measurements and the type of fabric that you may be using, since almost all leggings call for cloth with some inherent measure of stretch. If you’re not familiar or comfortable with stretchy fabric, you may want to read this post from earlier this year that talks all about it.

It actually took longer to measure and cut the fabric into the right pieces than it did to sew them together. Since both of the green fabrics are spandex, I was able to use the same type of zigzag stitch that I used to make the green and red scalesuits for both iterations of Mera.  The waistband is just your run-of-the-mill 3/4" (1.91cm) wide knit elastic with the top edge of the leggings folded over it. Depending on the strength of your fabric, you may have to fold it around your elastic more than once, so it's a good idea to build extra allowance along your topmost edges. I used successive rows of zigzag, then straight stitches (so one sits on top of the other) to affix the folded fabric around the elastic.

Once the waistband was in place, I added the swaths of burgundy so they rest along the hips. Since that fabric was faux-leather rather than spandex, it didn't have a lot of stretch and I could use standard straight stitches to sew it on. Something to note if you're using faux-leather: despite it being, by definition, fake, this type of fabric can still be very thick and give your sewing machine a hard time. You may want to do a few tests with some swatches of the faux-leather just to ensure that your settings are correct and that your machine can handle the fabric.

This is what I've got so far:

While I'm really happy with the fit and the overall shape, I have this nagging notion that the base Hunter green color doesn't jive with the olive or burgundy. Since everything else turned out well, I'm not keen on buying new fabric and starting over. Instead, I'm going to alter the color and part of the texture with a combination of fabric paints from Pebeo. 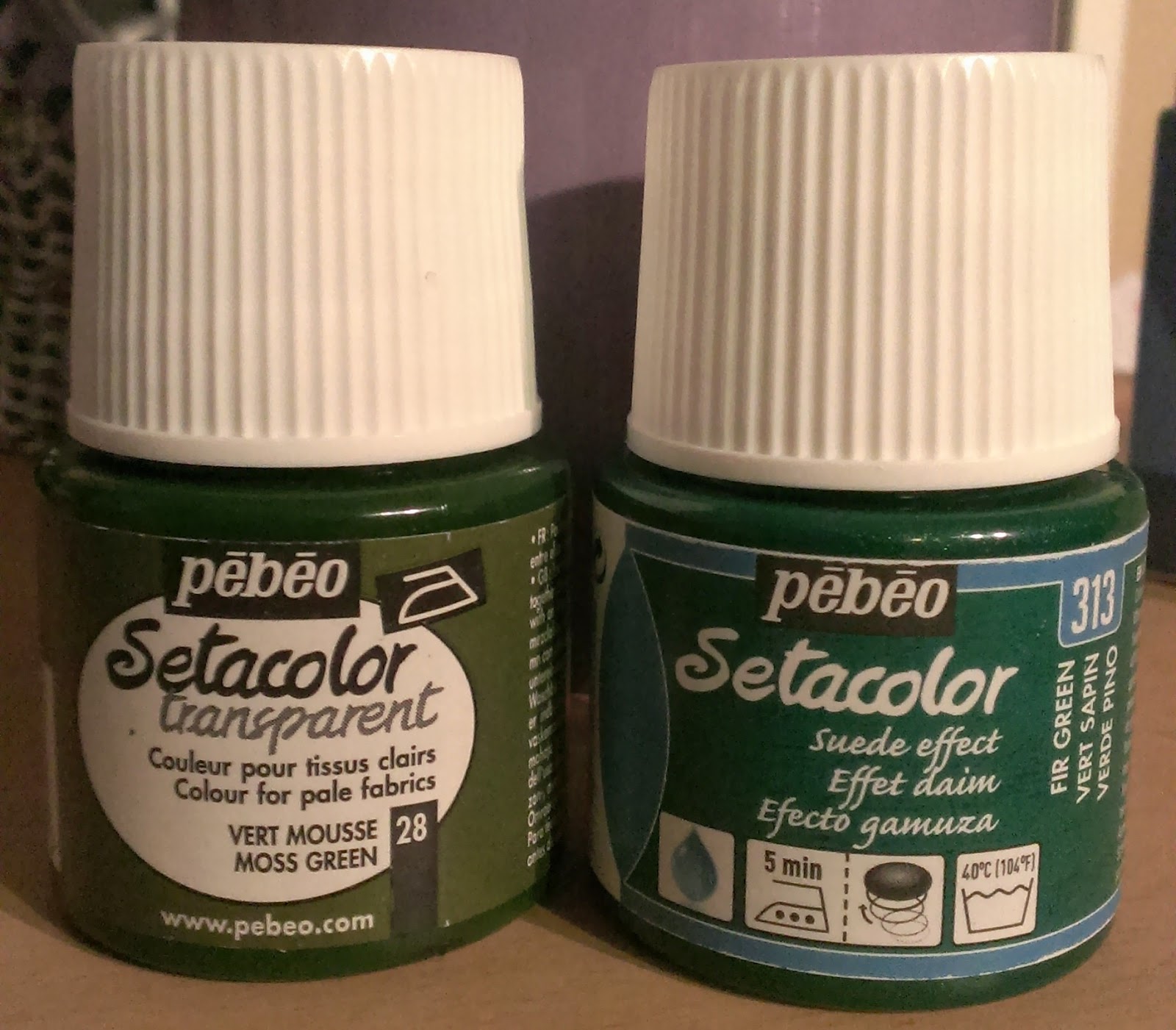 The new base color will be the moss green you see on the left; the portion on the upper legs will be enhanced with a tiny bit of the 'suede effect' paint on the right. These fabric paints are applied with a broad, stiff-bristled brush, and are then melded with the fabric itself using an iron on a low grade heat for five minutes. After the ironing, the paint takes permanently and is supposedly indistinguishable from the fabric itself, even if you should wash the garment you paint. It claims to be able to hold up even to dry cleaning, which is pretty bold as far as fabric paints go. I'll let you guys know how it all turns out!