Posted by Kel
November seems keen on asserting itself as the darker, stormier portion of fall. Fortunately, all the rain and rawness we’ve been experiencing lately makes for ideal conditions in which to A) play all the games B) bake yummy things and C) curl up with a good book when not doing A or B. As mentioned last week, we’re in the midst of an effort to bring you more of B and C…well, more of everything really, but particularly B and C. 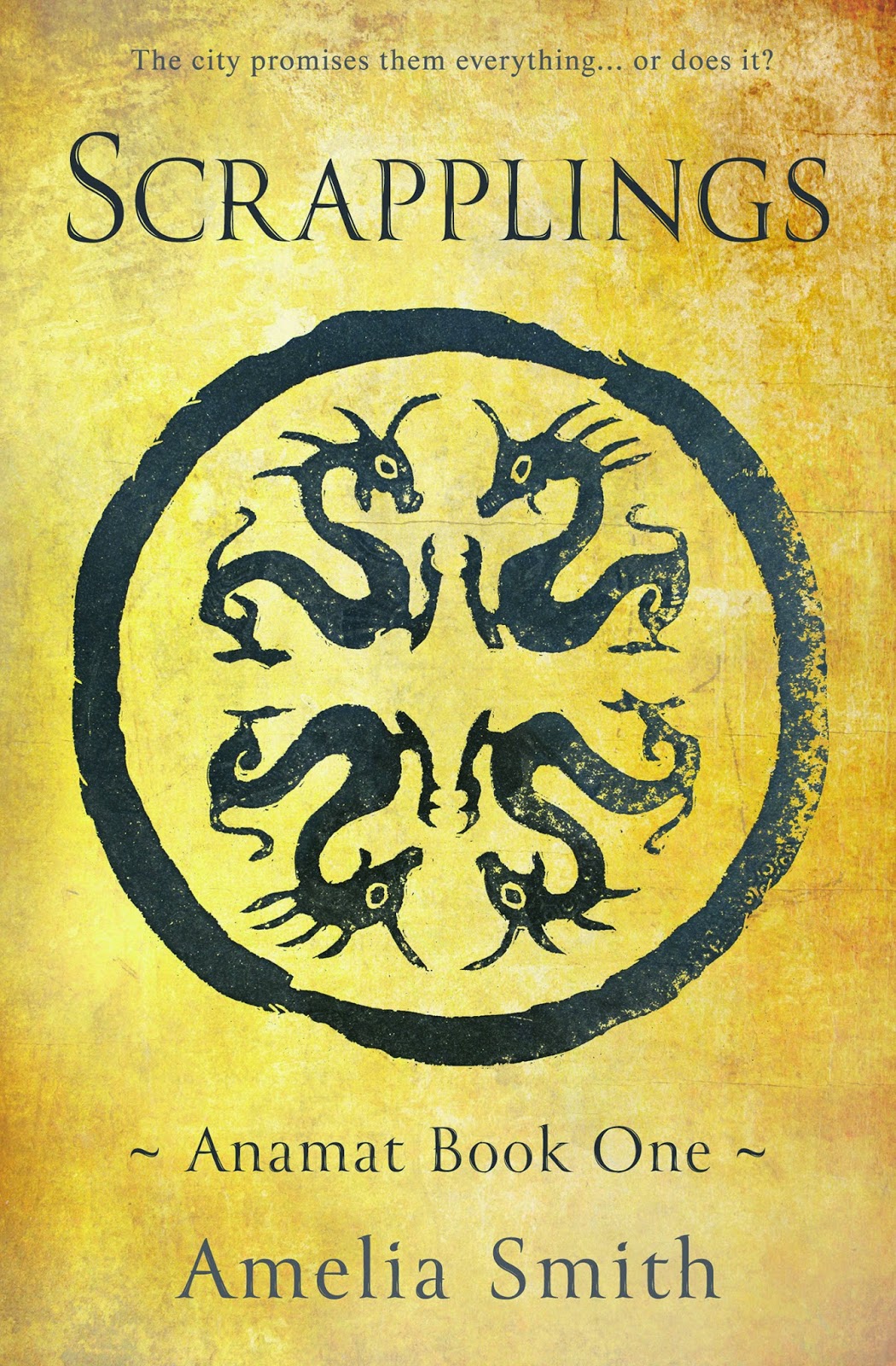 As part of that endeavor, we’re presenting you with a special couplet of posts. This post reviews Scrapplings, a  new fantasy novel by author Amelia Smith that will be available for your reading pleasure in a few weeks and our next post will be a guest entry by Amelia herself.

Scrapplings introduces us to the land of Theranis, an island nation favored by dragons. That favor, we quickly learn, is somewhat tenuous; the majority of the citizens of Theranis are completely unable to see the creatures that they revere and there’s a degree of unspoken skepticism as to whether they still exist at all. However, a small minority of the denizens of Theranis know that the dragons are not only very much alive, but influence many aspects of daily life. Those “dragon-touched” individuals are regarded by their “dragon-blind” peers with a mixture of opportunism and superstitious revulsion and, for that reason, the former tend to conceal their abilities from the latter.

The protagonist of this tale, a young girl named Darna, is amongst the ranks of the surreptitiously dragon-touched, but her murky origin story belies a potentially more magical lineage. We meet Darna in the midst of the drudgery that characterizes her life as a kitchen servant in the keep of a provincial prince. She is hobbled by an old injury that never healed correctly but her disability and low station don’t stymie her ambition to trek across Theranis and build a new life in its capital: the city of Anamat (for which the book series is named).

Darna’s plans are rent asunder when a priestess of the dragons arrives at the keep and delivers a nearly unbelievable message. Instead of leaving for Anamat in an orderly fashion, Darna is forced to flee into the wilderness. During the course of the journey that follows, she meets with three other youths: Myril, an older girl with preternatural hearing; Iola, a beauty so touched by the dragons that she has difficulty clinging to reality; and Thorat, Iola’s sworn protector.

We learn that the travels and experiences of this quartet are not atypical of adolescents in Theranis. Thousands of pre-teens flock to Anamat each spring in the hopes of securing an apprenticeship in one of the many guilds there. A lucky few can purchase said apprenticeship upon arrival. For the rest, it’s a season of begging and scraping to get by in a desperate attempt to build a life for themselves. These scrapplings exist in their own transitory de facto society, the machinations of which serve as the fodder for the middle third of the book.

The final third steps up the action considerably as the Cereans, a foreign faction known for their hatred and/or denial of the dragons, engage Darna and her diminutive ‘gang’ of fellow scrapplings in various intrigues whose nature lies just outside the realm of her comprehension. Her role in these machinations not only angers the powerful dragon Anara, but appears to threaten Theranis at large.

Scrapplings features plenty of tropes that will feel familiar to fans of fantasy, but their usage feels comfortable, homey even, rather than tired. Part of the reason for this is that Smith doesn’t rely on them for either her characterization or for worldbuilding. The characters are where the text really shines. I’ve always considered it a mark of good writing when you find yourself getting upset with or otherwise personally invested in a fictional character, and there are plenty of instances where you’ll likely find yourself doing just that. Furthermore, Smith scaffolds the world of Scrapplings with excerpts from ancient texts and common folklore, but the majority of the reader’s education of Theranis stems directly from the experiences of the characters. You will only learn about various customs/factions/rivalries if the cast encounters these and then only to the extent of that particular interaction. It’s a very effective way to keep readers engaged on multiple levels throughout the narrative.

The pacing starts out on the slow side and takes most of the book to build but it helps to keep in mind that this is the first book in a series of five (with book two coming to market next spring). Given that, as Scrapplings spans slightly under 400 pages, it’s to be expected that certain aspects of the narrative take longer to get into. Conversely, the last 30 or so pages blaze by, leaving an ending that feels a bit rushed, but no worse for wear.

It’s a tale that fantasy aficionados will likely enjoy. There are elements of Marion Zimmer Bradley (a female-centric, magic-based culture threatened by internal corruption, hostile foreign elements, and waning faith in the old ways) and Daniel Abraham’s Dagger and Coin series (a world that owes its existence to dragons and grapples with sudden societal change). If you’re a fan of either set of works, then Scrapplings will likely be a pleasure for you. If you haven’t read either, fear not; there’s still plenty to enjoy. It’s a fresh take on an incredibly dense genre, and that’s no easy feat. The world of Theranis is lush, alive, and fully encompassing. The prose is fluid without being overly complex, which, along with the ages of the protagonists, allows for some crossover potential for young adult readers.

Bottom Line: Scrapplings is an interesting, engaging adventure that will appeal most to fantasy readers. Its rich cast of characters and deceptively robust setting will leave you glad that there are four additional books slated to follow and that readers will not have long to wait before they can return.