Posted by GIR
Over the holiday break I found myself absolutely buried in games, no thanks to the Steam Winter Sale. As a friend of mine likes to say, "Praise Gaben!" Between gifts of games and titles I just wanted to spend more hours on, I was having trouble deciding what to review next. Part of the issue here is I just felt like spending more time with things I had already covered *cough* FarCry 4 *cough* Yet out of all the new titles I had at my disposal, I found I kept launching one game in particular time and time again. It was the least likely of suspects, but I often found that, while trying to make up my mind as to what to play, I had booted this one title up without even being consciously aware that I'd done so. I’ve decided to return to tell you about this strangely addictive and pleasantly surprising game today.

Depth, which is developed and published by DigitalConfectioners, was picked up on a whim while it was deeply discounted. The premise of hungry sharks versus treasure seeking divers seemed simple and amusing enough, but it ended up totally surpassing my modest expectations. Like the sharks in the game, Depth came out of nowhere, sunk its teeth in me, and proceeded to thrash and shake the hours out of me like so much treasure from a diver. 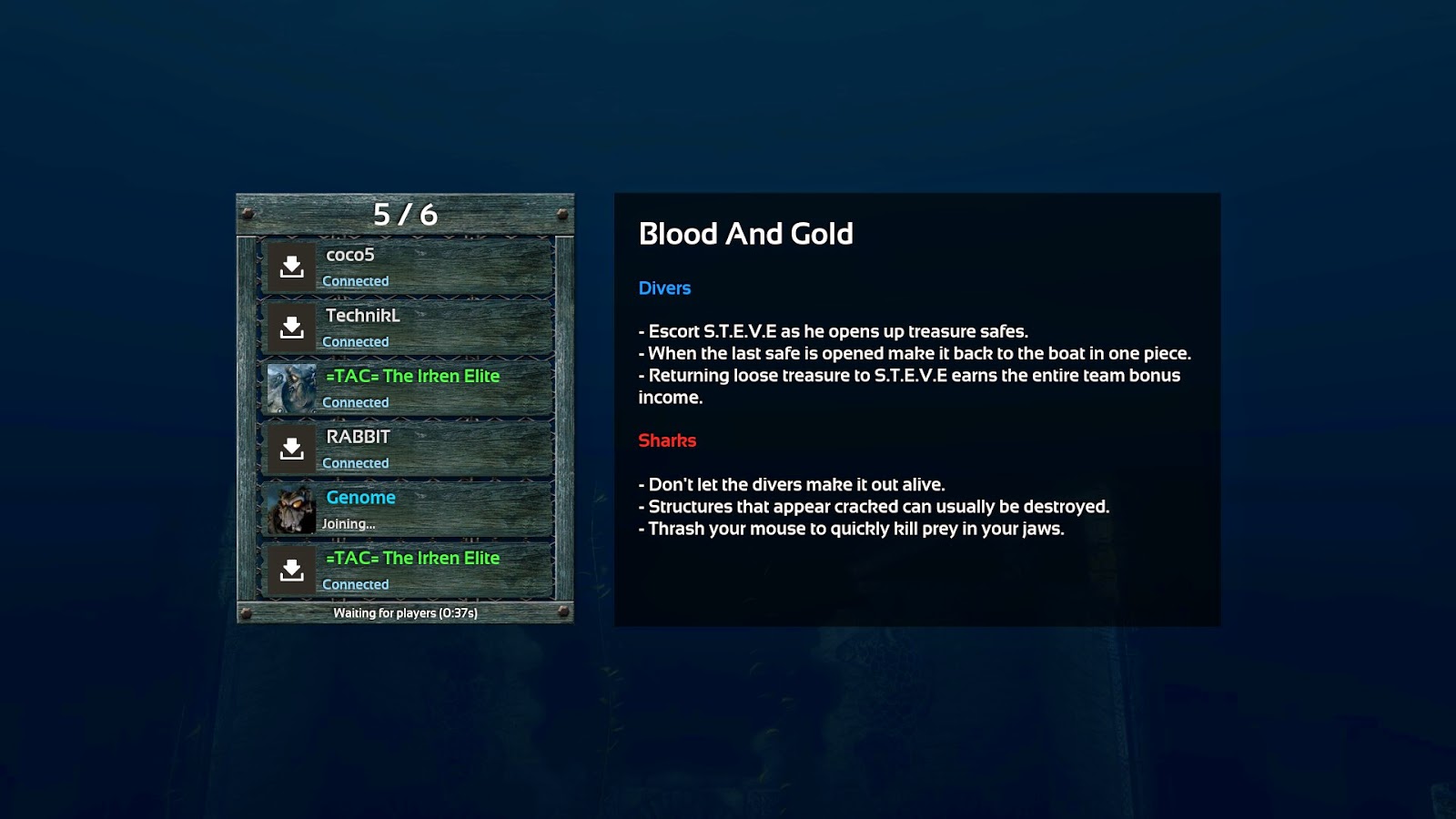 There are currently two modes of gameplay. The first, called Blood & Gold, pits a team of four Divers against a team of two Sharks. Divers have three different characters to choose from but these variations are entirely cosmetic. Sharks get three species to choose from and, unlike the divers, that choice matters as it's the primary determinant for your base stats. The Mako has lots of stamina and a sleek profile, but low health; the Tiger is your middle of the road option with both stamina and health attributes being equal and an average overall body size; the Great White is just what you'd expect, with lots of health and a huge profile, but low stamina. 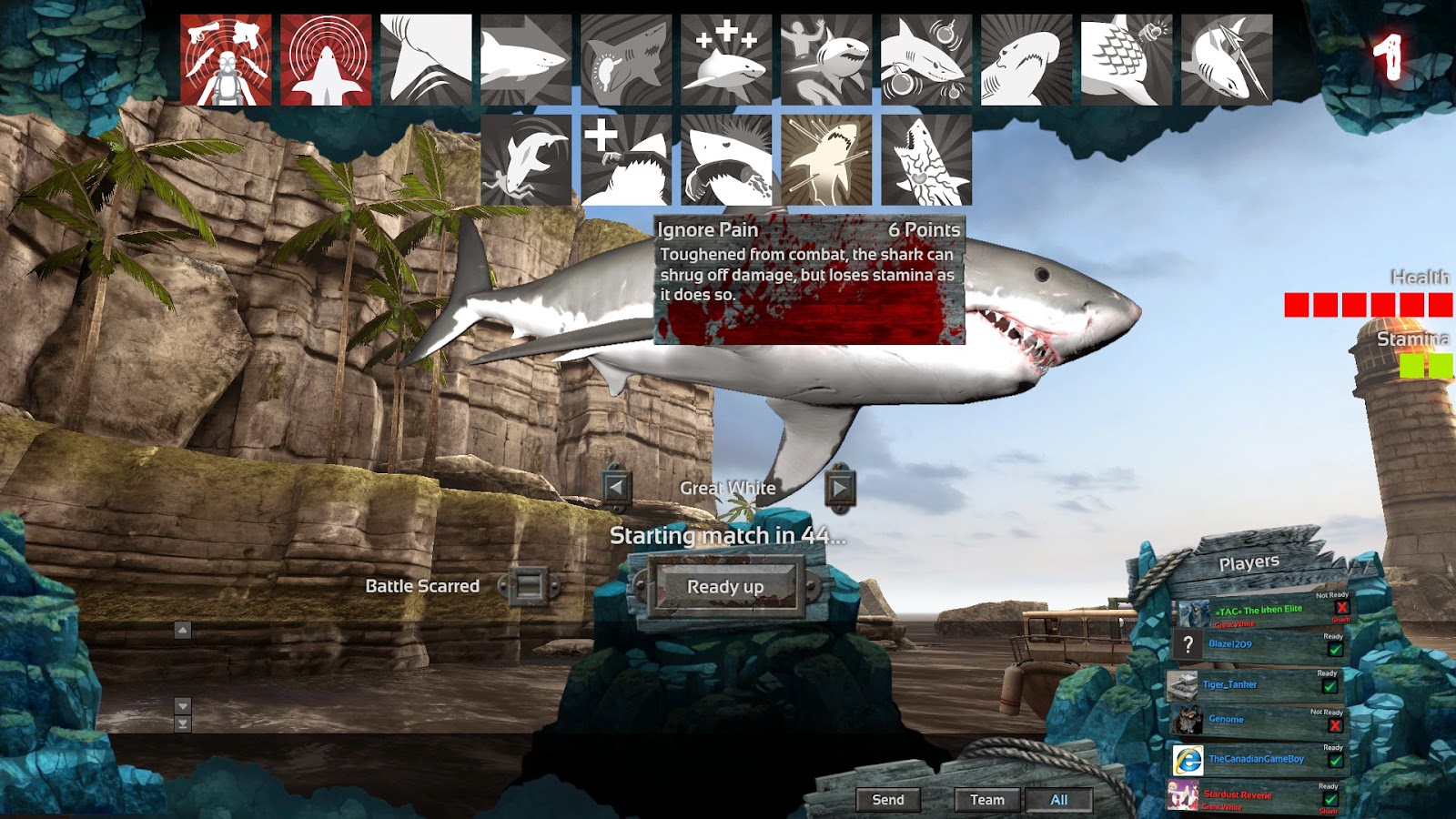 The goal of the divers is to guard a robot, S.T.E.V.E., as it travels through one of six Maps unlocking safes and gathering treasure until it reaches its capacity and must return to the boat it was launched from. Players must see S.T.E.V.E. back to the boat or kill 30 sharks, whichever comes first. There is also gold littered about each level which divers can collect and return to S.T.E.V.E. in order to bank extra gold which is then used to equip weapons and items between lives similar to any other FPS/TDM game (Counter Strike/Team Fortress/Etc). What weapons are available to a given player is dependent on what their profile level is, which is improved simply through playing matches (even if you lose every round your profile will still gain some XP each time). Everyone starts with some basics unlocked, like spear guns and pistols but, given enough time, you can unlock everything from bang sticks to navy surplus mines. Team strength for the divers relies heavily on clever placement of sonar buoys to reveal sharks, and powerful automatic rifles and explosives in the form of spears or mines. 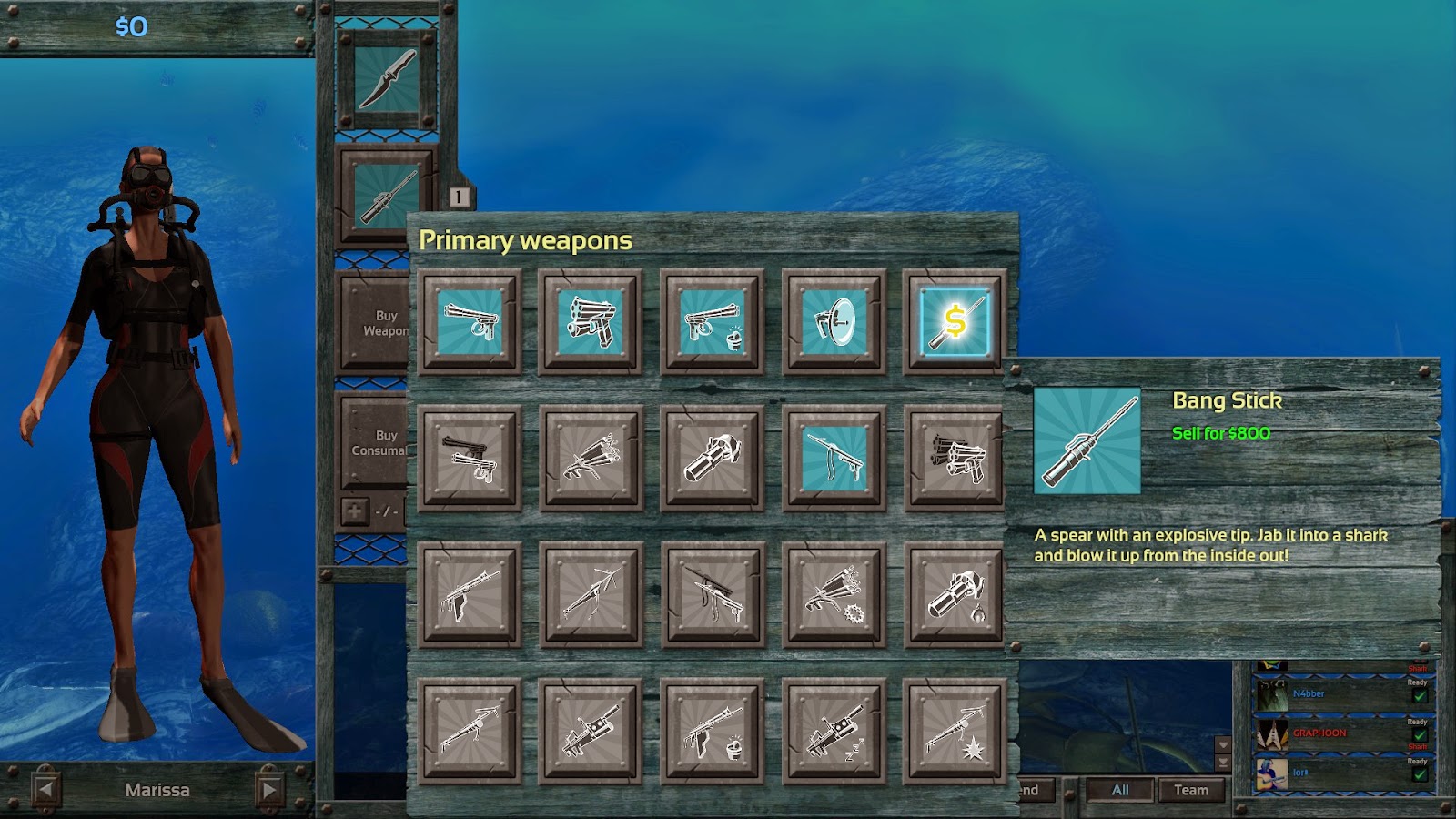 The sharks’ objective is fairly simple: eat greedy divers. To help level the playing field against  the heavily armed meat bags, sharks get evolution points per diver they kill. These points can be used in between lives to buy various upgrades. Despite the different base stats and variable attributes, all sharks have the same upgrade options which are also unlocked over time by leveling up your player profile. The sharks may be outnumbered by divers, but they have a couple things going in their favor: they can detect divers from further out than most divers can see through the murky waters and they swim MUCH faster in open water compared to the divers. Other than the Mako, sharks can take quite a beating; the divers, on the other hand, get shredded like tissue paper once a shark grabs hold.  Sharks can also restore small amounts of lost health by catching and eating seals which populate some maps. Lastly, if the sharks need to stall the progress of the game for any reason they can crash into and disable S.T.E.V.E. in order to slow the divers’ progression through the map.  Overall I found it much easier to be a diver than a shark, which I simply attribute to the experience being more familiar from my experience in other FPS games. 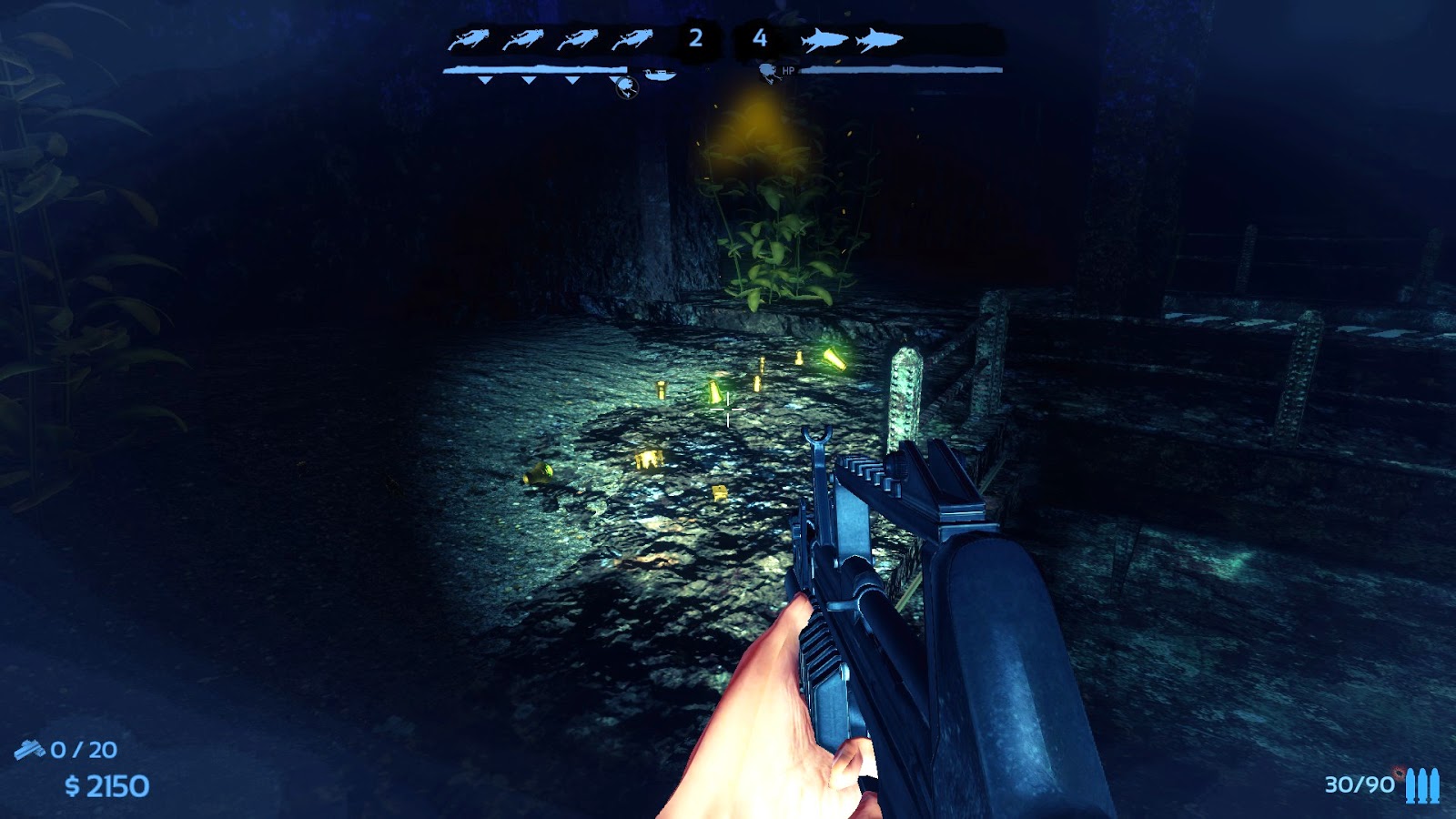 The second game mode, which was only recently added, is called Megalodon Hunt. For reference THIS is a Megalodon. In this mode five divers face off against the Megalodon with the player who lands the killing blow getting to become the Megalodon in the following round. Divers start with DPVs and scramble to collect gold. The gold automatically improves their weapons along a set progression while the Megalodon just tries to devour divers. Points are awarded individually for the quantity of gold pick-ups and kills; the first player to reach 15,000 points wins the match. I was not particularly impressed with this game mode but more options and variation is never a bad thing. 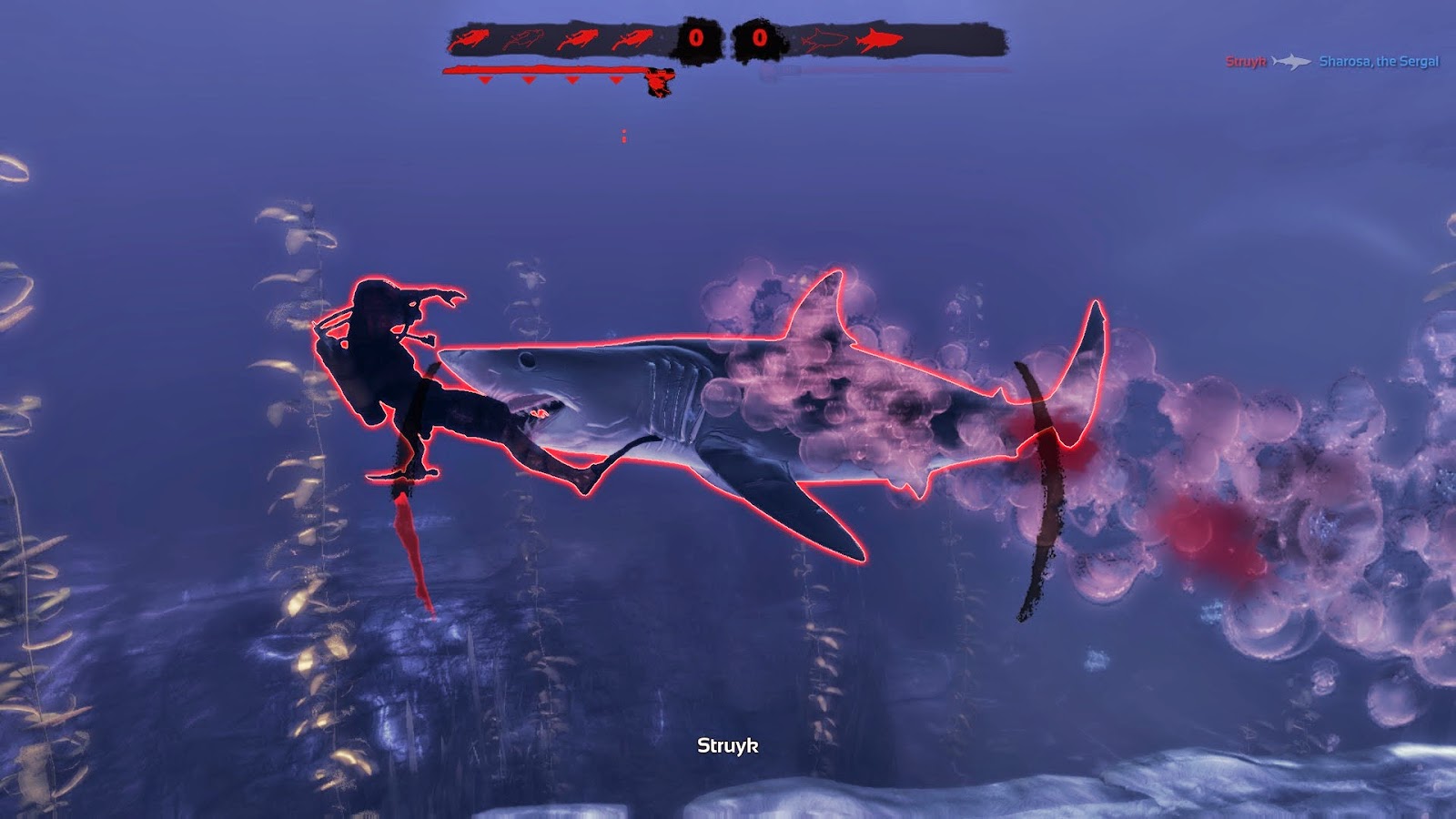 Maps are well-crafted and provide an excellent sense of both tension and atmosphere. The quiet deep is disturbed only by the occasional burst of air bubbles released by a scuba tank, rapidly increasing heartbeats warning divers sharks are near, and the comforting pings of a sonar buoy. Overall I felt the game itself is well balanced in terms of items and abilities, but that team matchmaking was less so. While I would love to see an even more expansive map list, there already is a surprising amount of replay ability in Depth. Due to the unlockable weapons, evolution options, various achievements, and monthly as well as all-time leader boards, I can see myself diving beneath the waves for hours yet to come. 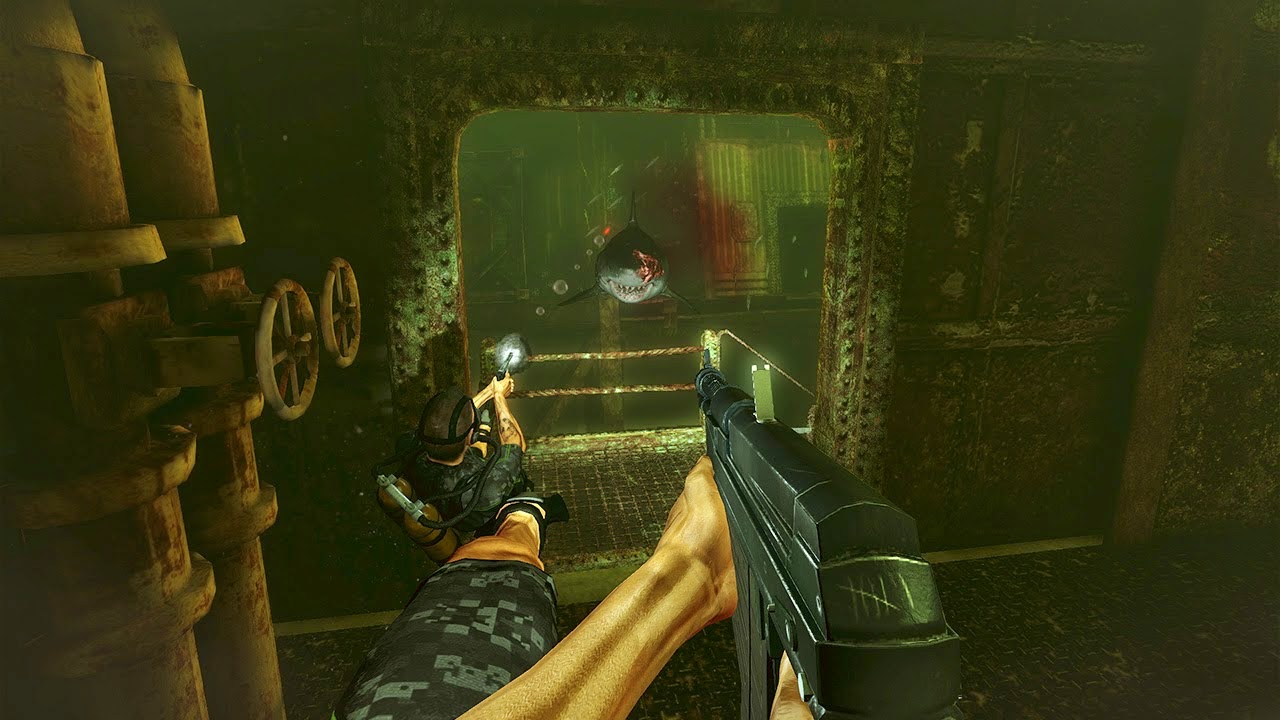 If you are looking for a fresh take on the old team-based shooter formula, and love tense moments punctuated by furious action, I strongly recommend you take the plunge for yourself and give it a shot. It is possible to play with AI Bots for practice, but the game works best against other Humans. I fell that the community itself also seemed more helpful and welcoming to new players and less toxic than your traditional Call of Duty or Counterstrike, though your personal experience may vary. Depth is out now and available for $24.99 on Steam for Windows PCs.