Who doesn’t love how awesome it is to be an attorney? Reading agreements, researching case law, reviewing testimony, endless hours spent on Westlaw and LexisNexis, everything to get a law aficionado’s heart racing. If you are not a fan of that stuff then I am sure you just read that as sarcasm. If you are a fan, then you may be salivating at the prospect of doing some law-fu right now. If you are a gamer and enjoy the prospect of practicing law in a game, then you are most likely a Pheonix Wright (PW) fan. But how great would it be if you could play a PW style game on your PC rather than on solely on your Nintendo DS?

Regeria Hope is a PW style legal game with a female protagonist created by Golden Game Barn. The game is episodic and the first episode has been released. It is available for download here, and you can name your own price. Naturally, the questions of how this game holds up compared to PW and how it holds up in its own right are the most pressing. Hopefully, I will be able to satisfactorily address both questions. 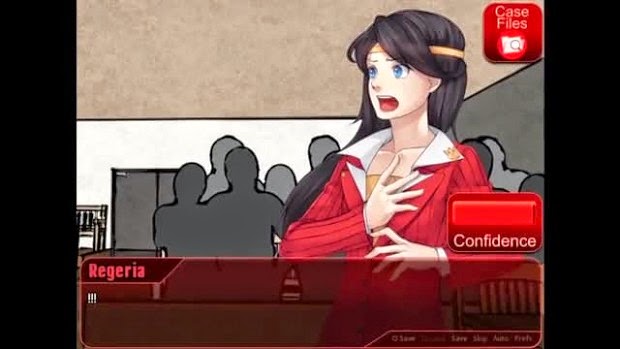 Regeria is a plucky young defense attorney on her first murder case. Her mentor hand-holds her through her first trial and gives her guidance to teach her how to handle herself. This world is similar to that of PW in that, in the future, the court system has radically changed in ways that do away with what we'd consider typical practical justice. In the Regeria world, there is no longer “reasonable doubt”. In a murder trial, you have to prove that your client is innocent and/or prove that someone else committed the murder.

As with all games, there is a required suspension of disbelief. In PW, we accept that things have changed such that court trials are only permitted 3 days, at the end of which the judge must rule guilty unless the defendant is proven innocent. There is even a conversation about this change at the beginning of the first game, explaining why this change was made and establishing the disbelief that needs to be suspended. Unfortunately, Regeria does not clearly establish what disbelief needs to be suspended, aside from “reasonable doubt”. The prosecutor arbitrarily sets how much time the defense has to present its case and the judge agrees with it. There was no dialogue establishing that the prosecution has this power. In PW, the judge is bowled over by some of the prosecutors, but in these instances it seems more like the judge is being meek rather than the prosecutor having a right to make demands. In the Regeria world, it seems the prosecutor has the right to set arbitrary time limits since it does not surprise the judge, even though it does surprise the defense attorney. 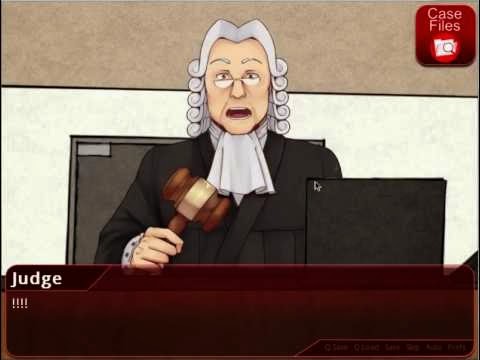 Aesthetically, Regeria is enjoyable. The background music is classically styled, which I enjoyed, but that is certainly a personal preference. The art assets for the characters are well-drawn. Everyone is pleasant to look at, whether they are beautiful (which just about everyone is, as is typical of Japanimation-style features) or they are regular looking but are just nicely drawn (in the case of the judge). It is of small note, but the cross-fades between who is talking are done very well. However, the background is dull and uninspired. In sharp contrast to the crisp, clean art of characters, the background art is generic and crude. It conjures images of crowd scenes from racing games: the crowd is a generic blob with little detail.

The humor of the game is the most enjoyable part. It is not the over-the-top responses that I am referring to, but the more subtle dry humor. When Regeria says, “I’ll see you in court,” to another attorney while they are already in court, I chuckled to myself and thought about what a ditz she was. Then the other attorney made a remark with similar sentiment about how they already were in court; that made me chuckle as well. Later, the same interaction plays out again with a reversal of roles, but this time they are outside of court. Regeria is annoyed that she didn’t get to use the “I’ll see you in court” line properly. That is funny writing. 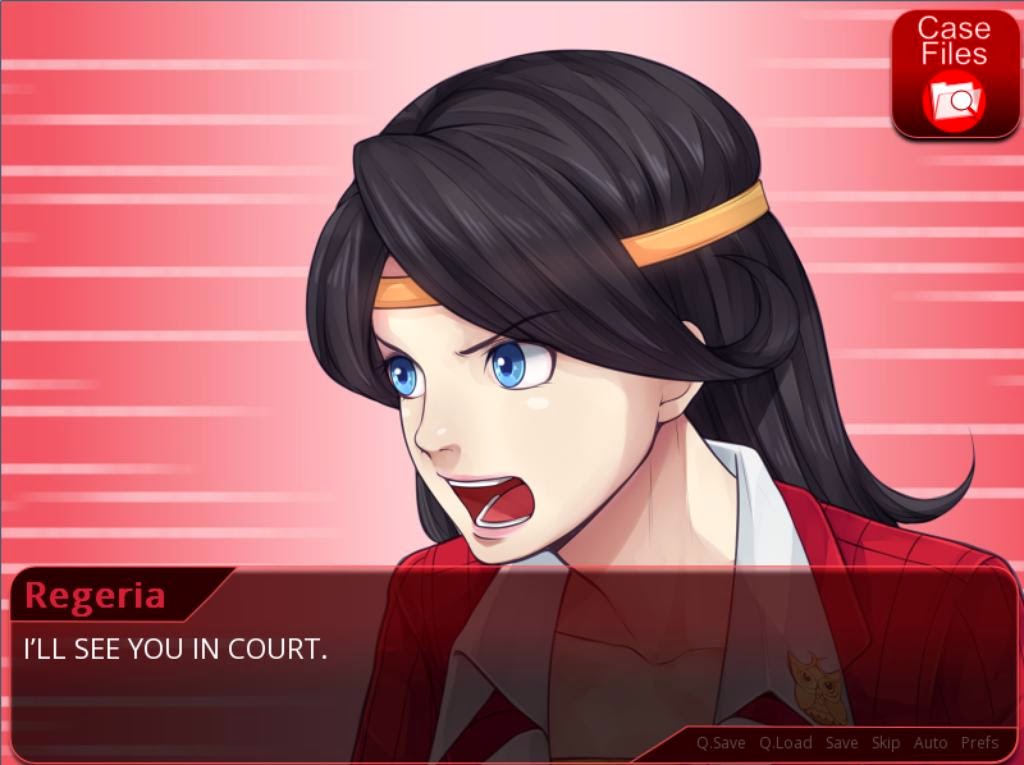 Additionally, there is some eye-rolling humor which is also enjoyable. The names of characters are puns, and the responses to some questions are done in a very witty and humorous way. The mannerisms of the characters that define how they act can be enjoyable and humorous, but can also be a bit annoying, based on personal preference. I have a big problem with character stupidity; it makes me annoyed much more than I find it humorous, while other people may find it funny. The judge is an massive fool, much like the judge in PW could be at times. However, in addition to being a fool, he acts like a petulant toddler. I understand that many people will find that funny, but characters like that annoy me. The only time I like them is when they get massive comeuppance, but since this is the judge, it is unlikely to happen. 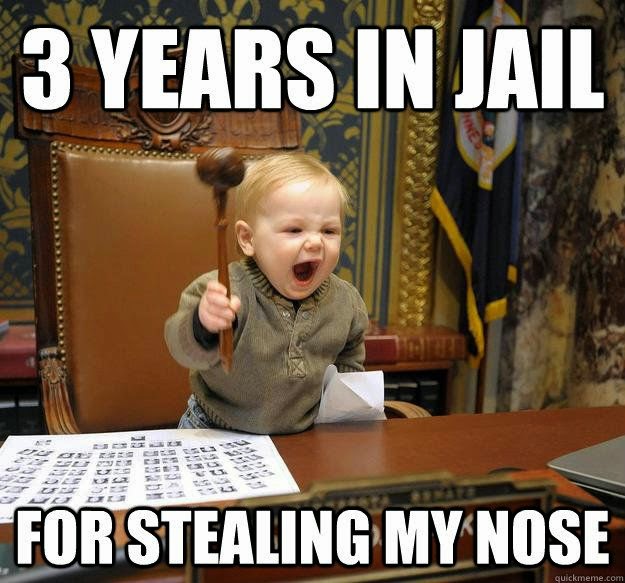 Unfortunately, there are some weak points. The sound assets for voices are just terrible. They are grainy, the quality is much worse than the beautiful quality of the music. Additionally, the voice acting is uninspired and unenthusiastic. Everyone can tell the difference between real emotion and imitation forced emotion when you do not have a good voice actor, hence all the hate behind the Vader “NOOOO” scene in Star Wars: Episode III – Revenge of the Sith. 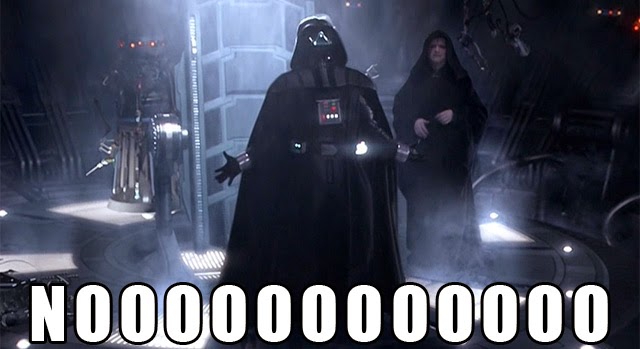 However, worse than poor voice acting are some missteps in the implementation of game mechanics. There were instances where seemingly irrelevant pieces of information were added to the Case File while other seemingly irrelevant pieces of information were omitted. This made it painfully obvious that the added information was important and needed to be used, however there was no way for Regeria to know that in-game. Similarly, some seemingly very necessary information that is stated did not get included in the case file. Both of these are annoying, but did not ultimately break game-play.

The most egregious issues did break enjoyment of the game however. Firstly, in a story-driven game like this, there should always be check-points. I found out the hard way that if you fail the chapter, you have to start over from either the very beginning or from a save point. I expected check-points which would allow me to return to an earlier point if things went bad, so I did not have any save points. Big mistake: I had to start the game all over. Check-points are so ubiquitous that I never considered that they might not be included. Going hand-in-hand with the poor planning from the lack of check-points, it turns out that you can fail the game in the same spot multiple times without having any idea why or what the right choice was. I have replayed the same section of game over and over more times than I can remember and always end up failing either due to a predetermined failure path or running out of time. From this, I surmise that at one point I made a decision that took me down a path from which there is no return. For a story-driven game, this is a big no-no. Either a path should be insta-fail, or else you should be able to recover from that path. In PW, you would at least game some small hints, and if you tried every action you could eventually find one that worked. 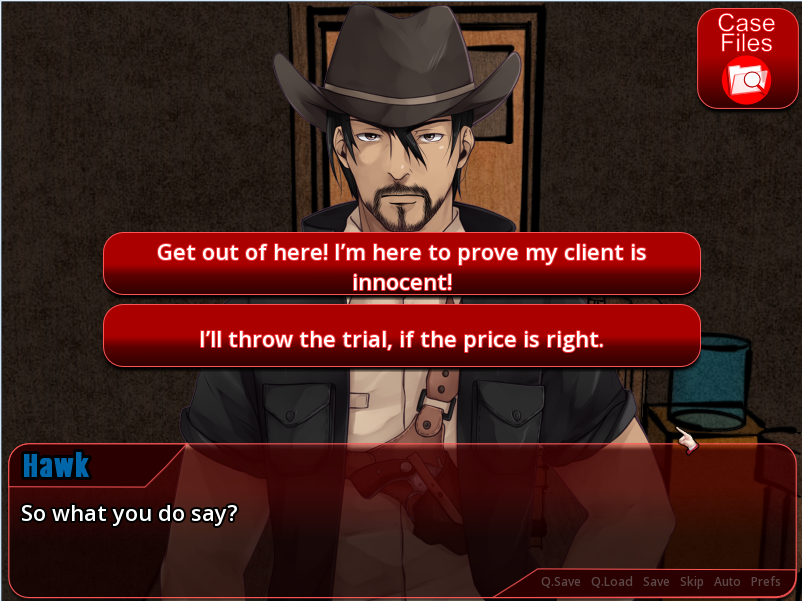 Lastly, there were instances where I tried to present evidence that proved that given testimony was a lie, but the game did not agree with me. PW had the same issue several times. It is rather difficult to keep track of all potential evidence and all potential testimony to make sure it all works together. However, the point of these types of lawyer games are to make the player feel smart. Players like feeling clever when they see a connection between evidence and testimony. However, when there is a clear connection that proves a lie but the game is not programmed to recognize that connection, it is just frustrating. For example, a witness testified that someone changed their name less than 5 years ago, but a will I had in evidence showed that the “new” name was in use more than five years ago. That is a clear lie or error, either way it is valid objection. Lack of recognition by the game means the developer did not spend enough time reviewing the evidence and testimony together.

Recommendation: Medium. Overall, if you enjoy PW games, then you are likely to enjoy Regeria Hope. One might say that Regeria is just a copy of PW with different characters. In some respects, this is a fair assessment. The type of humor, how evidence and testimony interaction is handled, the banter of the characters, all of this is just the same as PW. However, the general type of game, “court trial presenting evidence to contradict testimony” I feel is now a genre of game that started with PW. In that respect, Regeria is a new addition to that genre, not merely a PW clone. Additionally, I would like to reiterate that Regeria does a great job with the dry wit, which PW does not even attempt. My biggest complaints are still that it is easy to fail the trial without knowing why, there are no auto-saves, and poor evidence-testimony match up. If the author could fix these issues in later episodes, there is a real possibility that Regeria could be a great attorney game, good enough to consider it as part of the PW universe, even if it is just in the player’s headcanon.