The dropship's engines roar as we soar over the jungle canopy of the Shear. I exchange a few glib remarks with my three fellow Hunters as I anxiously chew on the stub of my cigar. Quickly enough the cargo bay doors are peeling open and I'm sky diving into the heart of this unforgiving landscape, frantically scanning the surface for moment of our would be quarry. We hit the ground running before I've fully got my bearing; our Tracker is off and running, chasing blue tracks indicating the Monster's recent passage. As we enter a narrow canyon a flock of birds take flight, possibly startled by what appears to be a large boulder careening toward our location. Before I can fully struggle to my feet, I'm getting trampled and bathed in fire by what appears to be a two-story hulk of rampaging muscle and chitin. Fellow hunters are shouting incoherently for shields and traps, I misplace my call of an orbital barrage and fumble for my laser cutter. Before I die it occurs to me how woefully under-prepared we were for this hunt. 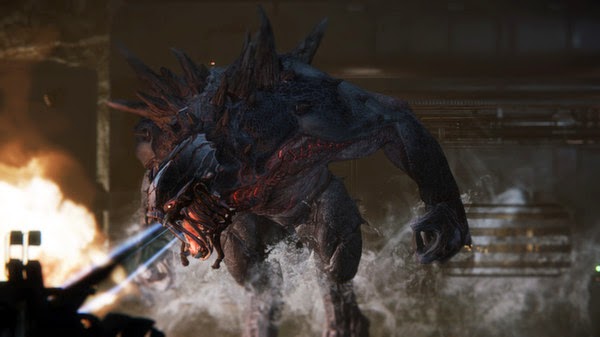 Welcome to Evolve, or at least the "Big Alpha" access version I was able to get my hands on this Halloween weekend. Turtle Rock Studios, who changed the face of Co-Op First Person Shooters back in 2008 with Left 4 Dead (L4D), are aiming to do so here again with Evolve. Where as L4D was a story-driven, team-based affair Evolve is strictly a PvP situation with one player controlling a single Monster pitted against a team of four Hunters. If you are familiar with the L4D series it's basically a Tank battle if the Survivors all had skills/classes and the Tank had special abilities beyond a simple rock toss (though that IS featured with one of the Monsters).

As mentioned, there are 4 classes of Hunters (Assault, Support, Trapper, Medic) each with a unique set of abilities to suit their role and a jet pack (with limited fuel) to help with mobility. From what I could tell you cannot chose your team composition, that is to say your team may only have one of each class and the game slots each player into a role. The role you receive is based on the order of priority that you assign to each class before you get placed into a match. I found the system seemed to work reasonably well, with me getting my preferred class in 8 out of 10 matches. Of those two remaining times I got my second and third preferred options; I was never forced to play my least preferred. 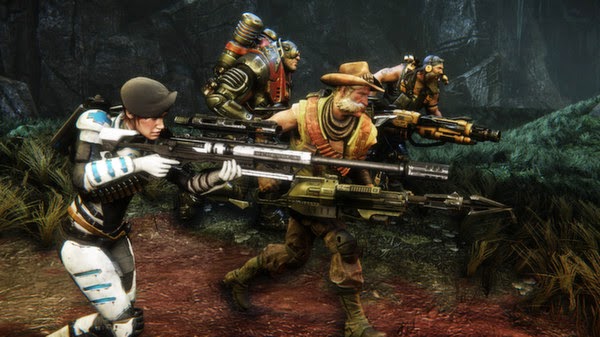 My preferred class was Markov the Assault who came with two offensive options: a high damage shorter range Tesla Gun and a longer range, weaker damage Automatic Rifle. These were paired with both trap mines and a Personal Shield. My first experience though was with the Support class, which as noted above, didn't exactly pan out. Hank the Support gets a rapid-fire, medium-range laser cutter, a shield generator he can deploy on teammates, a cloaking field in a small area of effect, and, most importantly, the ability to call in a high-damage air strike which, while it doesn't damage teammates directly, does knock them out of position or prone, which can be just as bad if deployed poorly. Val the Medic is curiously armed with an armor piercing shot that allows other hunters who hit the same spot do x2 damage, a healing gun that uses a beam to heal over time as well as revive allies at range, an area of effect burst for instant heals, and, finally, a tranquilizer dart which highlights and slows the Monster.

The fourth and final Hunter, who is also arguably the most important, is the Tracker, Maggie. Maggie is armed with a rapid fire but short range and wide spread machine pistol, harpoon traps, a pet who can follow monster tracks as well as revive downed teammates, and the most important skill - the mobile arena - which locks everything into a Thunderdome situation for a limited amount of time, preventing the monster from escaping. Trap a Monster before it has time to feed and evolve and it's an easy win and praise from your peers. Fail to deploy it correctly and you will suffer all the verbal abuse of your fellow players can muster. While you can drop the Dome prematurely if you find yourself on the wrong side of the barrier, doing so uses the its cool down time, even if you cancel the dome immediately. 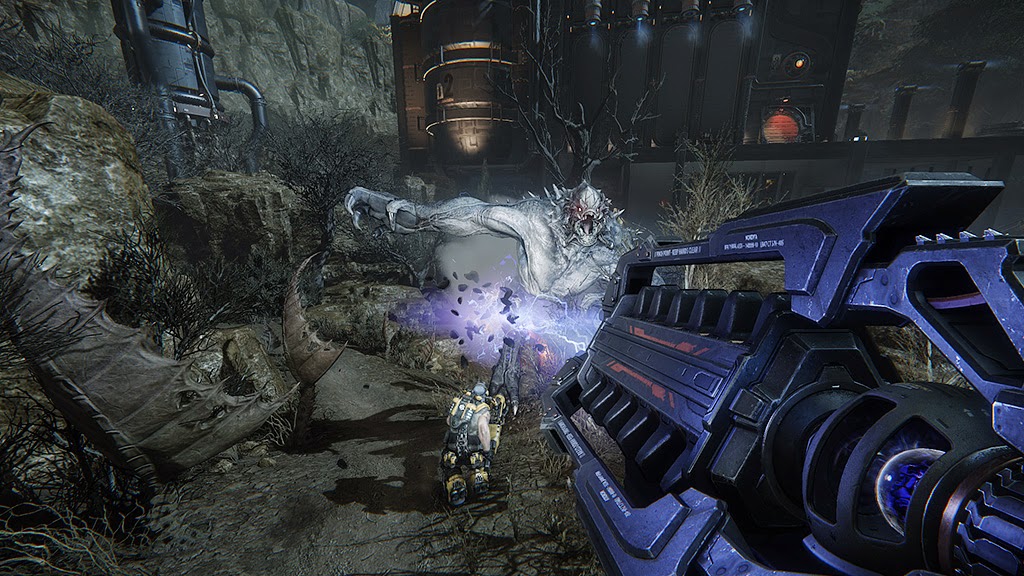 While only four types Hunters may not seem like a lot, there are variants of each class that can be unlocked once certain benchmarks are reached. For instance, once I was able to do a certain amount of damage with each of Markov's skills the game allowed me to use the assault character, Hyde. While I retained the personal shield I had with Markov, in place of my usual loadout I found myself armed with a flamethrower, minigun, and toxic grenades. Sadly, with only a 3-day alpha I was unable to experience the other class variants, but I did look them up here just to see what else might be offered in the final version of the game. Note that beside the two existing variants for each class is a ??? hinting at even more builds. Presumably certain combinations will be better suited to hunting each type of Monster. 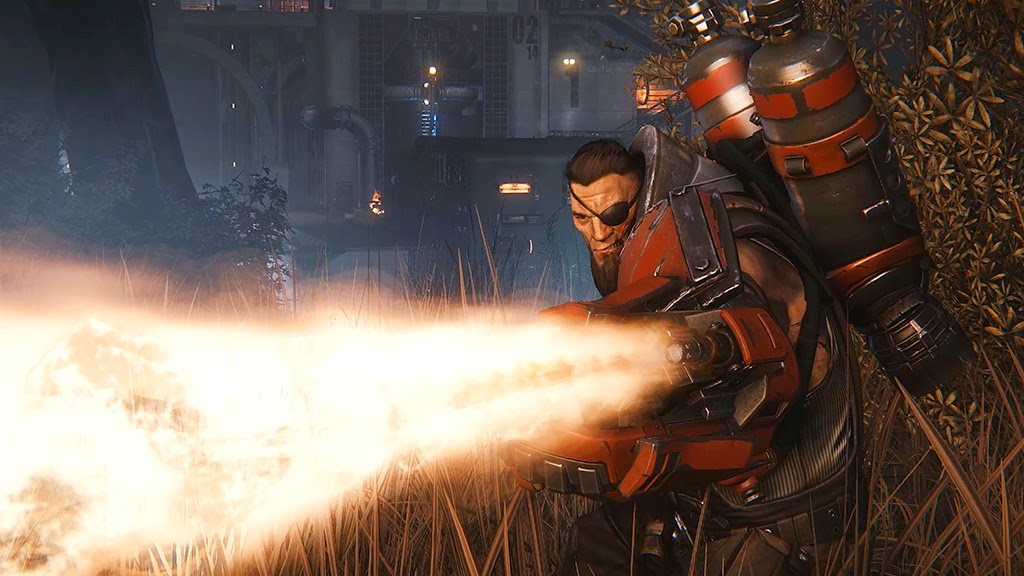 Right...so the Monsters; the other side of the coin. As far as I could tell there were only two in the alpha and a third yet to be announced, which seems troubling. Don't get me wrong, when my time came to rampage I had a blast. You start off with three points to distribute among four skills but, as you hunt and eat the wildlife on the map, you can eventually Evolve to gain more hit points, armor, skill points, etc. This is also important because the Monster has two ways to win. While the Hunters simply have to kill the Monster to win (though this is sometimes easier said than done), the Monster can either kill all the Hunters OR reach the third stage of their Evolution, which lets them destroy a power generator located on each map. 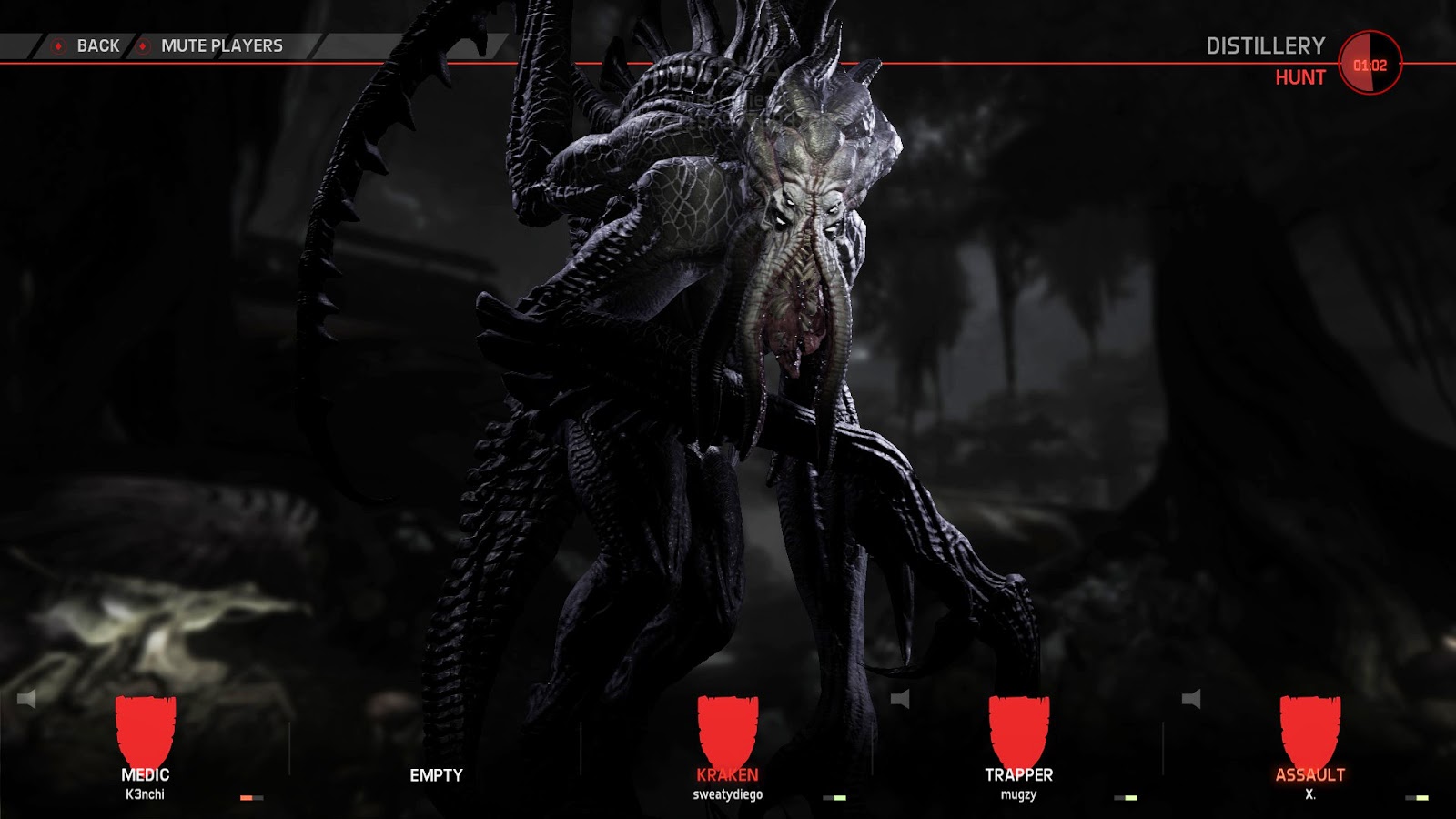 I managed to try out both the Goliath (leap striking, fire breathing, rock tossing, charging brute) and the Kraken (flying, lightning spewing, trap laying, sneaky jerk). Each felt powerful in their own way but with one distinct difference. When I wasn't able to Evolve beyond even my first stage as the Goliath, if I chose my battleground well, I could sometimes kill the hunters just as easily as if I was a stage 3. As the Kraken, if I made it to stage 3 I was unstoppable. If I was caught in stage 2 it would be a close fight, and if I couldn't make it out of stage 1 it was over before I could cast my first skill. Also, like the Hunters' variants, each Monster needed to be unlocked by mastering the one before it. While I don't find this method of locking away content behind skill walls wholly disagreeable, (better than a pay wall, for instance) I do worry this means early adopters and frequent players will have an undeniable edge over more casual folks, which could drive players away. One of the things that made L4D so great was that every survivor was functionally the same whether you'd played 100 matches or 10. The same was true for the special infected, assuming you played VS mode. If new players are entering the game at an inherent disadvantage too often, a brutal skill gap can develop that will kill the community quickly.


If Turtle Rock wanted to make a game tailored to hardcore PC shooter fans then why do there seem to be so many features which feel like a compromise for consoles? No FOV options? Only 4 skills per class clearly laid out for a gamepad controller? $60 price tag?

Ok so here's my real issue. Let's set aside the PC/Console debate for a moment and address the the big ugly Monster in the room. 4 Hunters (8 in theory, but only if you unlock them through play), 2 Monsters (maybe 3, again all unlocked through play), and 3 maps. Assuming I don't have the time or dedication to grind out the content what exactly did I just pay $60 for? It doesn't matter how much fun I had, that price point is absurd. Yes, the graphics are gorgeous; the ambient sounds are lovely. The music is dramatic; the hunter and monster mechanics are fun. But holy crap at that price this is a ripoff and I can't possibly encourage anyone to buy it with a clean conscience. Even if you double the number of maps at most this is $30-$40 worth of game tops. Each match only lasts about 10 minutes at most and after 3 days I found my self taking longer and longer breaks as the matches got pretty repetitive even as I unlocked new content.

This isn't to say that Evolve isn't enjoyable, but it is most assuredly NOT $60 worth of enjoyable in it's current state. If each additional "Monster Pack" they release as DLC costs even more $$$, as opposed to the years of free content and support they gave L4D & L4D2, I would consider boycotting the title on principal. Turtle Rock has either priced this based around their console release or they seriously overestimate what consumers are willing to pay for this kind of title on PC. With heavy hitters like Dragon Age Inquisition, Civilization: Beyond Earth, Wasteland 2, and others being out long before Evolve's February 2015 release date, I can't imagine forking over that much money for what's being offered. The game either needs heaps more content across the board or a serious reevaluation of its pricing plan before I pick it up.  As disappointing as it is for me to say, it looks like I'll be waiting for a Steam Sale before bothering to purchase Evolve and that is a damn shame because it has the potential to be a great game.