This Week in Geekdom (PAX and DC Edition)


Oh this week you guys. This. Week. By now, I'm sure you've heard about at least one of the controversies that went down in the past few days and currently have the Internet Outrage meters dialed up to eleventy.  Let's tackle these, as the implications for each kerfuffle are both broad in scope and will likely impact two major geeky franchises for quite some time.

Bruhaha #1: Exactly one week ago, on the last day of PAX Prime, the infamous now three-year-old dickwolves controversy reared its hydra-esque head(s) after Penny Arcade founder/artist Mike Krahulik (a.k.a. Gabe) stated that pulling the highly inflammatory 'Team Dickwolves' line of merchandise from the Penny Arcade store was a mistake.

If you're unfamiliar with this protracted mostly-digital war, there is an excellent timeline of the events leading up to last Sunday's PAX panel here.

The response to Krahulik's remark was almost instant and pretty much set the interwebs aflame. Many self-identifying feminist gamers gathered their binary lances and led the charge, calling for those who disagreed with Krahulik to boycott all forms of PAX. Other lady nerds expressed deep disappointment and their personal intent to eschew PAX, as they feel they can no longer attend in good conscience, and at least one indie game developer has cited these events as the reason it pulled out of PAX.

Correspondingly, there's been a disturbing and ugly outpouring of support for what some wrongly perceive as the message behind the dickwolves: that rape, rape culture, and misogyny in general is a-ok. I'll say this again because it bears repeating: the original comic and the dickwolves were NOT, in any way, condoning rape, belittling the victims of rape, or promoting misogyny. This is extremely important, because this misunderstanding is what started this horrific ball in motion in the first place.

Ugh, what a mess. Krahulik offered up this post in way of an explanation and apology but, for many, this was more than too little, too late. As this maelstrom has been swirling about for literal years, more than a few gamers have found themselves simply incapable of believing Krahulik when he says he's sorry. That's understandable. His words and actions are grossly inappropriate and he has not handled the situation with much maturity or tact. However, I feel that much of this current strife is wrought not from what was actually said at the panel, but from people reading/encountering the beliefs of others, then giving themselves over to rage rather than taking the time to actually sit, look over the primary sources, apply those to a larger context, and formulate an opinion for themselves. If you have not done this, I implore you to do so before weighing in or deciding to cancel your trip to PAX next year.

But Kel, you're a lady gamer and PAX East is one of the big convention highlights for The Care and Feeding of Nerds. Are you going to boycott?

No, I'm not. I state this intention not just as a female gamer, nerd/geek, and blogger, but as a survivor of sexual assault and attempted rape.

**The next three paragraphs contain triggers. Please consider this your trigger warning.**

When I was 20 I lived in Spain for a time and, though the vast majority of that experience was wonderful, I will never be able to look back on that stay without recalling this unpleasant event. While walking home from class, near mid-day, in broad daylight, a group of 5 guys near my age began to follow me, making the type of catcalls that are familiar to any woman who has traveled to a place where machismo culture holds sway. Those outcries are so common that you quickly learn to just tune it out and keep walking; most of the time that's enough to ensure you're left alone.

This time was not 'most of the time'. It was quickly apparent that the catcallers took active offense to being disregarded and moved to ensure that their words were being heard, whether I wanted to hear them or not. They pinned me up against a nearby wall, began to rip my clothes off, kissed my face, put their hands all over me, promised me that I'd eventually come to enjoy what they planned, in lurid detail, to forcibly do. I screamed until my vocal chords gave out, thinking someone in this half-filled plaza would at least phone the police. People stopped, stared, and walked away. No one, of all the people meandering through that square on their way home to lunch and siesta, made any move to intercede.

Two things spared me from being raped: I'd had two years of training in aikido and basic self-defense at that point and I was also wearing leather boots with hard, pointy heels. When the attacker closest to me shifted his grip on my arm to try and force me to touch him, I hit him in the nose with my elbow, then raked one my heels against the shin of the attacker immediately adjoining the first. It wasn't pretty, but it was enough to get them to drop me so I could run away.

So, even with that history, of being part of the infamous 1 in 6 statistic, I will be going to PAX East 2014.

Holy crap...why? Why would you go?

Short answer: because if I don't go, if I don't make an active effort to combat those who do embrace misogyny, then I'm letting PAX become a cesspool of hate. This, in turn, is effectively allowing the culture that I love and fundamentally identify with to be undermined and thus hasten its decay. I won't stand for that.

Longer answer: MC Frontalot composed this brilliant post about his stance on this matter and why he, too, will be attending PAX in the future despite being hurt and disappointed by these recent events. PAX is not just about Gabe and Tycho. It's not just about dickwolves and the uglier side of our community. It's about nerds coming together, feeling accepted, and having fun. It's a place where developers can make critical business connections and garner feedback from us, the players, so the gaming industry can move forward. Those are beautiful things. Those are things worth saving. If we run from PAX, we surrender it to the worst elements in our ranks and become accomplices in its destruction. We cannot let that happen.

Bruhaha #2: DC seems, for reasons that defy logic, overly eager to become the EA of comics. On Wednesday, Batwoman co-authors J.H. Williams and W. Haden Blackman announced they would be leaving the comic after issue number 26 is released in December. The duo cited a number of 'creative differences' with DC that prompted their departure from the Batwoman title, the most cited of which seemed to be that DC refused to allow Kate Kane (mundane alter-ego of Batwoman) to marry her long-time girlfriend Maggie Sawyer. This has been spun into a whole lot of "DC is homophobic!" over the past few days. 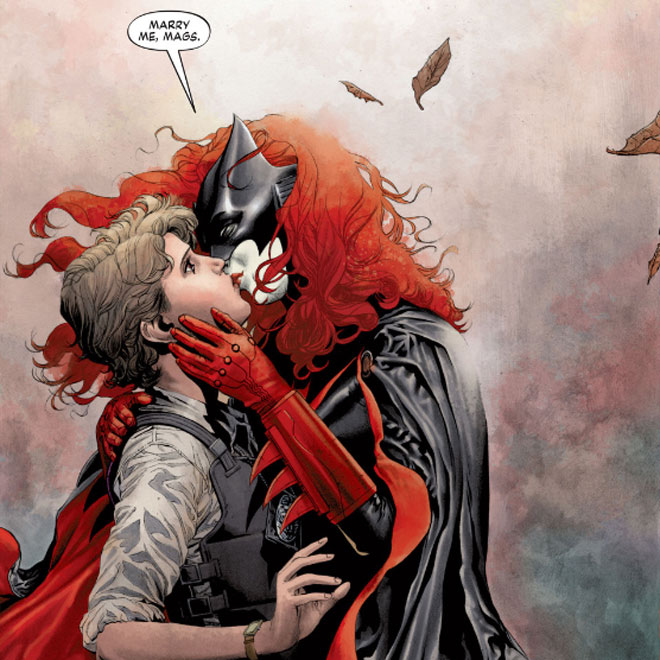 Here's the thing, DC isn't necessarily against gay marriage (though it hasn't been supportive either), both authors conceded that the issue did not factor at all into their decision, it's just against marriage as an institution. In DC's eyes, marriage is approximately equivalent to death, so they avoid including it in their storyarcs at all costs. This distinction, however, is both lost to public opinion at this point and doesn't paint DC in a flattering light. It just makes you shake your head, as DC had, quite frankly, a golden opportunity to present themselves as highly inclusive and be rid of any rumors that they were capitulating to the whims of famed homophobe/crazy person Orson Scott Card (who is working on the new Superman series). Instead they chose to adhere to their outdated, backward paradigm.

As if that didn't cause you to facepalm and reconsider future purchases of DC titles, on Friday the publisher put forth this drawing contest appealing to artists hoping to break into the comics industry. All contestants need to do is draw Harley Quinn naked in a bathtub about to commit suicide. Yes, you read that right.

Many nerdy properties of various media have a long, unsettling history of treating their female subjects as disposable. Violence against women, specifically suicide, has been romanticized time and again both within and outside of geekdom. True, the acts detailed as requisite for the drawing contest are well within the standard purview of Harley Quinn, who herself is a member of the Suicide Squad, but the combination of the hypersexualization of Harley's impending death on the eve of National Suicide Prevention Week (this upcoming week) with the news concerning the Batwoman series just makes DC look damned near evil. Argh. Why DC? Why? You are arguably the epitome of corporate insensitivity.

Here's to making this next week better than the last one guys. We can, and we will.