With Gen Con now looming large on the horizon, hours spent not up to my elbows in costume construction have become few and far between. However, even the most demanding bits of the costume were not about to keep me from delving anew into the realm of turn-based strategy games via the latest release from Firaxis: Civilization V: Gods and Kings. The first of two high profile offerings from the studio this calendar year (the other being XCOM: Enemy Unknown which is due to hit the market in early October and looked phenomenal in demo form at PAX East 2012) Gods and Kings is the first expansion pack offered for the fifth incarnation of Sid Meier's Civilization series. As a long time fan of the Civ games and Firaxis as a whole I doffed my more typical cynicism and harbored extremely high hopes for this title; hopes that were further heightened after a very promising demonstration at PAX. 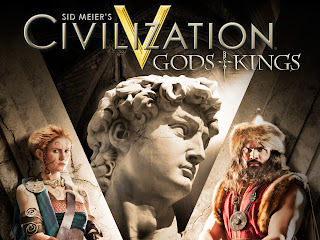 Short version: Firaxis made a game worthy of your loftiest expectations.

As alluded to earlier, the heavy skepticism that we gamers tend to bear concerning in impending release, particularly an offering for a long-standing and beloved franchise, is just another illustration of where the gaming industry stands with one of its most vocal target demographics. After what we've seen in the past six months alone it's hardly incomprehensible that some gamers would hesitate when presented with a title that claimed to profoundly enhance their playing experience. In this instance, however, we can rest easy. Indeed, playing Gods and Kings will underscore Firaxis' intentions to continually improve the listings that bear their name.

Akin to the downloadable country/region specific 'bundles' that are still being offered on Steam, Gods and Kings provides players with a given quantity of new items (27 new units, 13 new structures, and 9 new world wonders) in addition to 9 new civilizations and 3 new playable scenarios, including an alternate-reality scenario that features all-steampunk units. Beyond these add-ons, the pack alters gameplay in several different ways that will satisfy both newcomers and seasoned veterans of the series.

The first and most readily palpable of these changes is how the game handles combat. Civ 5 took pains to improve over the often contentious and confusing manner in which previous incarnations of the franchise treated inter-unit aggression. Those who have played even a single game of these earlier renditions can relate to the absurdity of having a highly advanced unit defeated by an experienced counterpart from eons past (i.e. a tank rolls up on a spearman and the former somehow manages to lose). Civ 5 attempted to address this by introducing an interface that would appear if the player hovered over an enemy unit. The interface presented some of the major facets of the potential confrontation that would factor into the outcome of the skirmish as well as the AI's estimate of the most likely result of said skirmish. Sounds great right? No more spearmen with demigod-like fighting skills? Eh. Not quite the case. The problem inherent to this is that the AI only presented some, not all, of the facets of potential combat but the interface listed the "most likely" outcome based on only what facets were displayed to the player, not all factors that influenced the actual combat. As a result, understandably frustrated users often found themselves losing battles that had been described as "Decisive Victories". Furthermore, AI difficulty operated on an extremely, almost laughably, steep curve. This was at least partially an intentional ploy on the part of the developers (the achievements for winning at Emperor and Deity difficulties claim that only the best players in the world can beat the game on these settings), but the quantity of "mislabels" for combat predictions correlated markedly with increased difficulty. Gods and Kings amends the vast majority of these issues; battle AI presents all applying facets of a potential skirmish and it functions more logically in general. No longer do you need to have a melee unit to capture a city and experience levels and their attendant bonuses have increased importance. Naval combat has also become richer and far more transparent. All this adds up to a more challenging but rewarding experience when waging war, which nearly every player can appreciate. Finally, battle animations are noticeably smoother and quicker so even large scale conflicts can be conducted in short order.

Other alterations include the reintroduction of religion to the franchise. The inclusion of religion in Civ 4 raised quite a few proverbial hackles when it was first announced, but the exclusion of this feature in Civ 5 drew arguably more criticism. Gods and Kings brings this back into the game in the form of "faith" which accumulates and acts as a resource much like the existing aggregators science and culture which can be spent on special units, buildings, and upgrades to the state-sponsored belief system. Players can first create a 'pantheon', which later morphs into an organized religion. The theistic terminology is literally the only similarity that the feature bears to actual religion, as taking these steps merely provides the player's civilization with tactical benefits (again, just like science/culture). While you can choose from eleven actual religions, the real-life tenets of these extend only to the most superficial, literally just the symbol used to identify your chosen belief system. Every other aspect of the player's religion is wholly customizable, from the benefits that followers receive to the actual name of the faith itself. The feature adds a vehicle through which a player can exert their civilization's dominance over their competitors and help smooth diplomatic and logistical matters through mid-game (cities of your rivals that adopt your religion can influence their respective leaders, for good or ill, and such cities come more readily to the fold, with fewer turns spent in resistance if relations go south and you end up conquering them).
The last major addition to the base game is another reintroduction of a feature from Civ 4: espionage. As with religion, Firaxis met with a not insignificant amount of gamer ire when espionage was omitted from Civ 5 and the studio responded to that angst with gusto. Beginning in the Renaissance era, players receive a spy. Unlike earlier editions of Civ, spies cannot be trained or purchased, but are awarded at various intervals as players progress through historical epochs. Spies have a variety of potential functions including rigging elections in city-states, stealing technology from opposing civilizations, conducting counterintelligence or just...spying. Spies, like their military counterparts, can gain experience and level up, which, in turn, broadens their potential functionality. What's especially nice about the espionage feature is that a player can be as involved or as hands-off as they care to be and still reap various benefits. Like the religion feature, espionage is easily tailored to an individual's playing style while still adding definitive content to the game itself.

Other interesting and enjoyable changes wrought by Gods and Kings include the reworking of the role city-states play in the game. Instead of ensuring yourself of a diplomatic victory by hurling gifts of gold at various city states (termed an 'economic victory' by the developers), the expansion pack now requires players to engage their single-city brethren via a series of quests. A player may choose to undertake or disregard the quests as they see fit, but, with the exponentially reduced importance gifts of gold plays in the pack, quests are often the easiest, most expedient way to curry favor with city states. Additionally, interactions with city states generally flows more logically and the states themselves have heightened strategic importance that is difficult for most players to ignore. Finally, historical eras (and the tech tree) have been reconfigured somewhat to include more, albeit shorter, epochs. Policies have also undergone some tweaking while construction/research times have been reduced a tad, ostensibly to improve the progression of the game itself.

Gods and Kings is a welcome addition to both the Civ 5 base game and the Civilization franchise as a whole. It is a viable example that some game developers, even larger studios, do take the experience and opinions of their player communities very seriously and this is reflected in the depth, breadth, and quality of play that their games deliver (lead designer Ed Beach was motivated to take on the expansion pack to fix the frustrations he and his friends felt upon playing the base game). I highly recommend Gods and Kings and eagerly await the Firaxis treatment of XCOM later this year.