Even with a 3-Day badge to PAX East it’s impossible to see everything and sometimes games will slip past your radar. This week I’m here to talk about one such game, Lost Orbit, an interesting indie title developed and published by PixelNAUTS. It's difficult to pin a genre label on Lost Orbit, as it's a neat little blend of rich atmospheric storytelling, speed runner, lite-rpg, and has been referred to elsewhere as a "dodge ‘em up". Players take on the role of Harrison, a lowly satellite repair man who finds himself stranded in deep space and desperate to return home after his ship is destroyed. 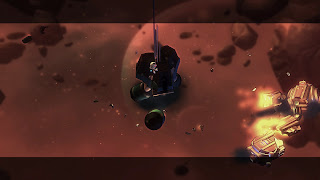 Thematically, Lost Orbit is a gorgeous game with an amazing soundtrack that captures the beauty of both open space and alien worlds (the game boasts 40 levels set across 4 unique solar systems), as well as the tragedy of being lost and alone in such surroundings. Well, not quite alone, as Harrison befriends a satellite who serves as a narrator to the player’s journey. I was immediately charmed by this and was reminded strongly of both Bastion and Transistor. Unlike those games, Lost Orbit’s narration may not be procedural or dynamic, but that doesn’t stop it from being just as witty, tense, or melancholy.


It’s almost a shame because, mechanically speaking, the main gameplay loop discourages you from enjoying most of the previously mentioned elements I enjoy so much. For starters let’s look at the rpg-lite system. Players can improve Harrison with various upgrades to existing abilities or get whole new ones such as a barrel roll, bombs, or a hyper boost. Upgrades are bought using a material called Obtainium the player collects along the path of each level and bonus amounts are awarded based on the speed they finish as well as the number of lives it took them to do so. 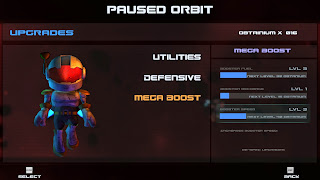 There is a Timed Trial mode as well as global leaderboards for bragging rights. I understand that Lost Orbit is marketing itself as a fast-paced dash through a deadly obstacle course where players will strive to get the best time while still collecting every scrap of Obtainum en route to the end, but personally I felt a strange disconnect for being given a minimal award and bronze rank for trying to take time to enjoy and appreciate what PixelNAUTS had crafted. I had gotten invested in Harrison’s story but felt as if the game was telling me if I wanted to be able to improve my skills and advance, I was going to have to start ignoring it in favor boosting through the level to get a better time and better rewards to ensure my survival. 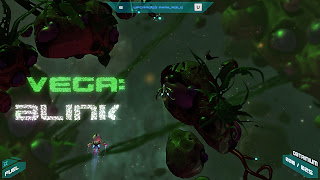 That last bit, the whole surviving thing, is trickier than it sounds. Harrison is fragile with no way to improve his actual durability. At the speeds the game expects you to travel, more often than not I got to experience what a bug must before slamming into a car’s windshield on the freeway. Thankfully there is a checkpoint system which seemed pretty well laid out and, while I died frequently, I was never set so far back that the resulting feelings of frustration overwhelmed me. While I DO have a pretty high tolerance for that sort of thing (Hotline Miami trained me well) I’m terrible at twitch based reflex games and started to struggle once Lost Orbit started throwing more complex elements like wormholes, intelligent enemies, and the ability to wrap around the edge of the screen at me. That said, it meant that clearing levels or having a particularly good run was always immensely satisfying. 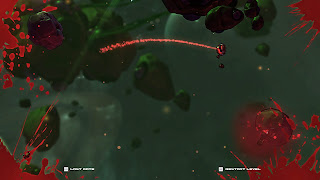 While eventually I had to put the controller down and walk away because I could no longer stand the sound of poor Harrison hitting another obstacle like so much jam on a radar dish, I want to stress I don’t blame the game here but, rather my own incompetence at avoiding the hazards of space.  PixelNAUTS have developed an addictive and compelling gameplay loop for Lost Orbit, combined with a forgiving checkpoint system to allow even the clumsiest of players enjoy the experience. I hope that one day I’ll master the intricacies of piloting Harrison and his suit well enough I can get him all the way home. Lost Orbit will be out for PC on Steam and PS4 on May 12th.

Full Disclosure: This review was written based off a review copy for the Steam version of the game provided by VIM Global Consulting.