Posted by Kel
It’s almost like the interwebs knew we were on a quest to feature more content outside of the realms of gaming. In the past few weeks we’ve gotten quite a few new original texts that we’ll be sharing with you. We got to glimpse into the dragons’ temple and now we transition to a very different, perhaps more familiar realm of life in a high school.

For high school is where the bulk of the action takes place in CONfidence: the Diary of an Invisible Girl, the debut novel of Paige Lavoie of Pumpkin Spiced. This coming-of-age story has a distinctly nerdy bent, with the awkward, comics-loving protagonist Barbara (yes, named after Barbara Gordon) going on a journey of self-discovery as she’s introduced to the world of conventions by way of the machinations of her school’s AV club. 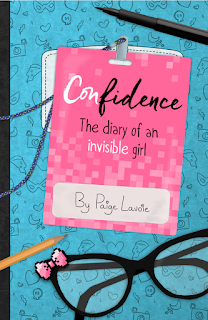 The club is populated with a handful of personable geeks led by Cassie, a recent transfer to the school after a long period of homeschooling. Cassie is the self-styled Queen of the Nerds and essentially the embodiment of all Barbara wishes she could be: confident, sociable, and resplendent with pastel hair that would make any denizen of Equestria go green with envy. Cassie’s force of personality and the creative talents of the other club members make up the backbone of a YouTube channel that they run under the guise of school approved club activities (while using school AV/drama club resources). Barbara is brought into their fold after her comic-inspired sketches catch Cassie’s attention and our heroine’s life is forever changed.

That which follows plays out like a teen movie. We get Barbara’s account of the proceedings via her entries into her diary, some of which morph into detailed first-person segments before eventually returning to journal entry format. She chronicles her bonding experiences with the group, particularly her deepening friendship with Cassie, as the group creates and produces episodes for their YouTube channel. It readily conjures feelings that many of us have experienced at least once before, realizing that you’re not alone in either the types of nerdy fandoms or the intensity with which you love these things. The exploration of those shared fandoms and, in Barbara’s case, new arenas in which to meet fellow fans is presented in a similarly nostalgia-inducing way. You’ll likely find yourself recalling your own first convention experience or the first time you donned cosplay. The text is also peppered with plenty of references that will make seasoned aficionados of various geeky properties break out into knowing grins.

All seems well for the members of the AV club at first, but it soon becomes apparent that initial appearances weren’t all of what they seemed. CONfidence breaks away from similar coming-of-age stories in its development of some of the characters and the layers of subject matter that are touched upon as a result. The majority of the individuals we’re introduced to are vibrant and complex, which is no small feat given that all we ‘see’ is filtered through Barbara’s gaze. In addition to the ‘a person may have crafted a careful façade to operate under, so be careful how you judge’ sentiments, there are quite a few nerd-specific social phenomena that are examined with impressive thoroughness and care. We explore the importance of having a fulfilling creative outlet, the unique and ever-changing role that social media plays in our lives, the revered but sometimes precarious atmosphere that a convention creates, how the definition of fandom is truly amorphous, and just how damaging it can be to condemn a fellow geek for not engaging with a nerdy property in a manner that we deem ‘correct’.

As mentioned earlier, at several points I felt like I was reading a film. This can be good; the narrative feels familiar while the prose is simple, super digestable, and allows you to plow on through it at speed if you so choose. However, the story arc does follow the movie-style trajectory and makes use of many classic tropes, so it can feel formulaic and potentially irk people who aren’t into that sort of thing.

CONfidence makes for a solid companion as you wait in line at a convention. It’s a fun, breezy bit of fiction that may conjure all sort of nostalgic feels and, as a potential added bonus, may inspire you to participate in NaNoWriMo (as CONfidence is the product of exactly that). If you’re planning on an excursion or two to the beach this upcoming summer, CONfidence may be an ideal book to bring along.


CONfidence will be available on Amazon beginning June 9th, but you can enter to win your own copy on Goodreads right now or follow other pre-release news via Paige's twitter.