Posted by Kel
Sorry for the delay in posting guys. Remember how I mentioned a while back that work gets rather…combative once every three months? Yeah, I'm up to my elbows in figurative Elder Hydra and that, plus impending deadlines for my graduate thesis, has effectively sucked away most of my blog writing time. But fear not! There shall still be posts. A handful of projects are on the docket, including two new costumes. But first, the matter at hand:

I've hinted at this subject for a while now but, like many of the other posts in the Nerd Life series, this content of this entry requires a certain care and attention to make the issues approachable without skimping on the substance. This will be the first in what will hopefully become a subseries of posts examining gender dynamics as they relate to our little cultural subset because, even though I'd love to say that such a thing is a non-factor, this is decidedly not the case. Also, while I'd be remiss to claim that this matter can be approached objectively, I'm going to do my best to maintain equilibrium via inclusion of male, female, inter, and transgendered viewpoints over the course of this series.

The past two years has seen an enormous outpouring of literal and digital ink concerning the treatment of women in geekdom following several high profile acts of blatant misogyny across a handful of arenas we'd consider to be in the purview of general nerdery. When we get word of these acts, responses tend to vary from the dismissive to the disgusted, but it's a rare day when you find a nerd surprised by any of this. Why? 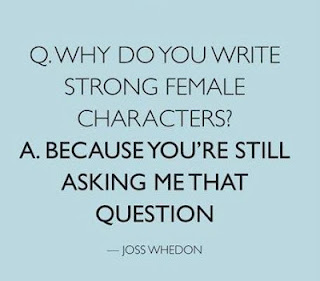 There's a strange sort of paradox shaping the attitudes and treatment of females within geekdom. We have members of multifaceted subculture that derives a significant portion of its collective identity from its intense adoration of subjects that fall outside the scope of what is considered "normal". Furthermore, the collective experience of geeks tends to be heavily influenced by distinctly negative or even persecutory interactions with non-nerds. This sort of thing is commonplace during our formative years and we've discussed the acts of self-preservation that often accompany nerds as they navigate the potential turbulence of the working world. You'd think that, given such a history, nerds would rank near the peak of most tolerant and accepting subcultures.

Here's the thing: we tend to believe that we are, in fact, a highly amenable and accepting group of people. While this may be genuinely be true of some geeks, our preferred method of socializing, forming tight-knit cohorts, lends itself to instances of groupthink that allow us to persist in this belief even when presented with first-hand evidence to the contrary. The most succinct and thorough breakdown of this phenomenon is this recounting of the five social fallacies we nerds tend to be guilty of. (I highly recommend you head over to that article and give it a read before coming back here and continuing with the post. It'll still be here, I promise.)

Add to this the fact that we nerds have a distinct proclivity to display certain awkward tendencies in social situations AND our tendency to leverage the anonymity afforded by the interwebs and you've got the potential for some seriously questionable behavior.

Even amidst the Nerdaissance, the vast majority of games, comics, movies, shows, and other nerdy paraphernalia are marketed towards a primarily male audience. That's nothing new, but the gender-targeting of that campaign played and continues to play a significant role in how we geeks form those precious cohorts of friends. The core of basket of interests many nerds share (gaming, fantasy/sci fi, science, technology, comics) is the gravitational fodder that draws geeks towards one another and then cements them into a conglomerate as members of the cohort are mocked or bullied for these selfsame avocations. Thus you have a rich set of interests held in common AND potentially hostile "outside" forces bringing a nerdy cohort to bear. Is it any surprise then that members of a cohort typically seek to preserve and defend their brothers in geeky arms?

For girls, developing their basket of nerdy interests may take longer and assume a more serpentine path than that of their male counterparts, as they are not (yet) the target demographic for the aforementioned core interests. It may take a concerted effort for a girl to obtain the same toys or reading materials given to boys. This is particularly true if they do not have geeky parents or relatives willing to leave the hot pink halo of the Barbie aisle and traverse other sections of a toy or book store. Of course, there are always exceptions to this. Fortunately, this trend is changing, as evidenced by the sheer quantity of nerdy accoutrements for infants, but social trends have an attending inertia to them and it may take a generation before we see equivalent nerdery in both genders by kindergarten.

At present we have a populace studded with tight-knit cohorts of geeks. The gender-specific marketing we absorbed in our youth resulted in said groupings being comprised mainly of males. The "preserve and defend" mentality is pervasive and, though it may peak in high school, persists well beyond the tenure of formal education. As such, we have the general practice that girls become regarded as outsiders by the cohorts and an air of sometimes heavy skepticism often characterizes the former's attempts to join the ranks of the latter, even if (and sometimes especially if) that cohort already has multigender representation.

The notion of having to prove one's credentials in order to gain acceptance by a group is hardly novel, but it's the rigorousness of said certification process that distinguishes us from other subcultures. As we've discussed before, we're characterized not only by our love of certain hobbies/properties, but the degree to which we practice and proclaim our adoration. When we encounter individuals who claim to cherish these same properties, but then falter in recalling what we'd consider basic information, the tendency is to discount these people as being less devout in their nerdy fanaticism and the associations for the resulting judgment are as follows: 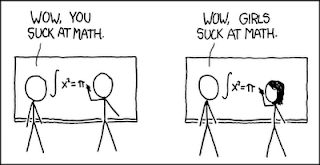 This "logic" stream is the basis for the Fake Geek/Gamer Girl and Idiot Nerd Girl memes. Granted, there are a certain subset of girls who pretend to adore nerdy properties in order to garner attention but I'd argue that there are similar factions of females out there who feign interest/knowledge about professional sports for the same reason. They're trying to look cool, ironically enough, and/or establish themselves amidst a social circle by faking their way in. These individuals trend towards conspicuousness, as attention is their ultimate goal, but they're frequently unaware of how foolish they look or how much damage their behavior wrecks on the rest of nerdery. (Note: if you're guilty of this, maybe some introspection is in order)While occasionally frustrating or obnoxious, it's a self-promotion tactic that's probably as old as humanity itself. I'd also posit that these actual posers are a tiny minority of females that self-identify as nerds/geeks and that these girls have been allowed a disproportionate amount of influence on nerdery as a whole.

We have to discount booth babes when considering what comprises the female portion of geekdom because, for the most part, they aren't claiming to be geeks. They're paid models doing what's stipulated in their contract, which is usually enticing guys into hearing a sales pitch or playing a demo. These girls are the equivalent of their besequined brethren draped across the chasses of various cars at an auto show. Those models probably won't be able to speak to the horsepower of the truck they're perched atop (kudos to them if they can). That’s not their job; their sole function is to entice you to spend time and money. Booth babes are no different.

Other so-called "fake" nerd girls are really just behind on the learning curve. Maybe they weren't exposed to geeky properties at a young age or perhaps they were recently introduced to a property/hobby by their significant other and wish to cultivate a shared interest. Or it could be that the lady geek in question may have a lot going on in her life and such prevents her from keeping up with various nerdy developments. She may also just have a nerd/life ratio that differs from yours. These are hardly reasons for condemnation, but they're arguably the most common. 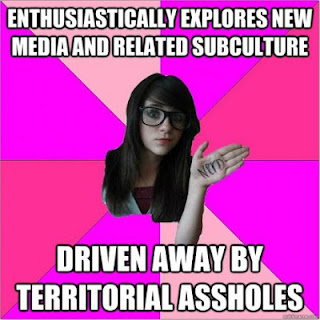 It's unfortunate that the zealousness and judgmental tendencies of some of our nerdy peers has created and maintains a cloud of misogyny over the majority of geekdom. Not only does this blatant hypocrisy drive away potential friends and contributors to our subculture, but it casts a pall on male nerds. Though I'd argue that a considerable percentage of gentleman geeks live up to that title, the actions of a few are often more than sufficient to damn the entire sex. Furthermore, some of the most insidious, less overt instances of gender discrimination take place outside of conventions and online gaming and are perpetrated by other women (and we'll talk more about each of these in future posts).

It's far from ideal, but things are changing for the better. Though this progress may be slow, even glacial at times, it's something. The past five years have given us female-focused nerdy websites such as the Mary Sue and even conventions expressly for women like GeekGirlCon. We've seen concerted rebuttals to acerbic, chick-bashing commonalities, namely the campaign to "reclaim" the Idiot Nerd Girl meme. Even just perusing the halls of a convention you'll notice the ratio of women to men, particularly if you compare your venturing year over year. Female nerds may be a small facet of the topography of geekdom at the moment, but that landscape is changing and our actions can help ensure that said alterations are for the better.