Posted by Kel
Sometimes the world of gaming seems to be one of feast or famine. Either you're eagerly anticipating one or more upcoming releases, and seething to various degrees if and when said offerings are delayed, or you glance back at your homescreen/watch/phone and wonder how it's possible that you've been engrossed in a game for that many hours. This phenomenon tends to reign supreme in the realm of video games, as the development costs alone often make leveraging certain shopping seasons a tacit necessity, and we're presently on the cusp of the last onslaught of releases in the year 2012. If all continues to go well, we'll have more games than we know what to do with by mid-October. Challenge accepted.

The past few weeks have delivered a pair of long-awaited sequels into our hot little hands in the form of Borderlands 2 and Torchlight 2. While I wish I had reviews for each ready to go, graduate school and my <ahem> limited experience with first-person shooters truncated those ambitions. Fear not though, for Torchlight 2 will get plenty of much-deserved attention.

While I'll readily admit that I came into the fold of aRPGs relatively late in my geeky tenure, the genre had near-immediate appeal and my first ventures into said realm (via Titan Quest and Torchlight) quickly succeeded in sucking away a not-insignificant quantity of time. That being said, I can confidently assert that the guys and gals over at Runic Games did a wonderful job with the follow up to their beloved original title. Of course, you'd expect nothing less from the some of the same guys who brought you Mythos and Diablo II. While it's common, and probably only natural, to see parallels drawn between this latest release and this year's much better known new kid on the aRPG block, the majority of my breakdown will compare Torchlight 2 to its predecessor.

Initially, Runic Games intended for this title to be a MMORPG but quickly shelved those plans when they 1) saw that people loved Torchlight in its original aRPG form 2) realized their own organizational shortcomings with regard to MMORPG development as Torchlight could not even accommodate LAN co-op nonetheless a gaming tier based entirely on multiplayer use. The company partnered with the Chinese publisher Perfect World and put their MMORPG plans aside in favor of developing Torchlight 2.

The sequel does almost everything that you hope a succeeding volume will do: preserves the stuff you loved about the original while adding elements that you wished were present during your earlier playthroughs. Runic, contributing to the trend we've seen a bit of this year, made it very clear that they heard the concerns and complaints of their constituents and took that feedback to heart in order to create a game worthy of the Torchlight moniker. A new rendition of the often moving and deep soundtrack beloved in Torchlight features prominently and, while the graphics have been fine-tuned, players will likely find the overall look to be simultaneously striking and familiar.
Set an indeterminate number of years after the events in Torchlight, players return to the much-maligned town to find that the previously playable Alchemist has been corrupted by Ordrak's lingering influence. When this former champion lays waste to Torchlight, players find themselves fleeing the destruction and fighting for their lives amidst cadres of unwholesome beasties.

As in the original, players begin by selecting a class then run rampant over a series of successive levels in order to complete quests and gather wondrous loot. The format and base mechanics are essentially identical to Torchlight and most other aRPGs. Also akin to its predecessor, the actual adventuring is the active driver of the game rather than any storyline. Though the latter is present, it isn't exactly the deepest narrative you've encountered, but this probably won't even register since you'll likely be consumed in various dungeon crawls and perusing your skill trees.

Speaking of which, the skill trees are one of many considerable features Torchlight 2 brings to the table. Players can still configure their accumulated experience points into one or more of three distinct trees but the depth of the potential synergies and utility of stacking effects brings not only a new dimension to your current run, but sets the stage for experimentation that encourages multiple playthroughs within even a single class. The number of "oh I've got to try that" moments add up with remarkable speed. The available options feel weighty enough to be exciting, but don't cross over into so-complex-it-needs-a-wiki territory.  Other great improvements/additions in Torchlight 2 include the following:

Replayability: As mentioned above, the diversity of the skill trees alone will probably foment the desire to play certain classes several times. Add to that the new class options (more on this in a moment), new difficulty levels, a host of tantalizing achievements, and a randomizing feature that reconfigures the maps/spawn points each time you play and you've got an effective rebuttal to one of the biggest complaints for Diablo 3. A single playthrough also walks that fine line between being long enough to get a sense of accomplishment and value when you finish, but not so long that multiple runs would seem onerous.

Customizable Avatars: Though the customization features aren't the most comprehensive in the genre, they are leaps and bounds above the stark three gender/class pairings available in the original. Players can now select between genders and choose from a sampling of face shapes, hairstyles and colors. As in Torchlight, can also give your avatar a unique name or let the game come up with one for you.

Pets!: The classic wolf companion is joined by seven new options: a standard housecat, a bulldog, a papillion, a panther, a hawk, a chakawary, and a ferret. The actual in-game effects of each species don't seem to vary, but there are a wide array of fish (yes, the fishing mini-game still features prominently) to transform your pet into a number of new elementals and fantastical creatures.

New Classes: Though it may seem at first glance as though there's only one addition to the stable of playable classes, it quickly becomes apparent that the classes themselves are more substantive. Yes, you do have your traditional party roles: mage/cleric, ranged, and melee, but there are a few nuances built into Torchlight 2 that, in conjunction with the reworked skill trees, make for a robust playing experience. Players can select from Embermage (mage/cleric), Outlander (ranged DPS), Berserker (pure melee), and Engineer (heavy/tank). All of the classes are highly versatile and, with enough tweaking of your skill tree, you can finagle ways to get skills that meld elements of other classes if you so wished. 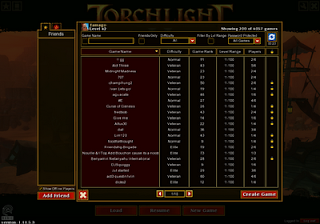 Multiplayer**: As mentioned above, the lack of even a two-person co-op option caused gamers to rail against Torchlight. So prevalent was this gripe, that Runic actually made it the focal point of their marketing materials leading up to Pax East 2012. Given the original overarching goal of Runic Games, it was clear that they were going to have to demonstrate their capability to host multiplayer games and foster a good community of regular participants. Torchlight 2 does provide players with both a LAN and a general internet multiplayer option but, in all honesty, this is the portion of the game that has consistently caused the most frustration. When the multiplayer does work, it works smoothly and makes for a highly enjoyable playing experience. However, getting an internet game to work is often wrought with disconnects and error messages. Additionally, gamers have to create a separate login for Runic Games that is supposed to have the ability to link with their Steam account and manually add friends (even if the friends are on Steam AND even if you bought the game on Steam). So why not just allow players to login with their Steam account? This is also assuming that a successful link can, in fact, be made, something that several gamers found to frustratingly not be the case. Torchlight 2 patrons have also noted that if they experience a disconnect during the course of an internet multiplayer game they are barred from re-entering the online multiplayer lobby, as the game does not recognize them as having logged out. These unlucky players frequently have to wait up to an hour to be permitted to rejoin the lobby. As it's only been a week since the game's release, I'm willing to cut the developers some slack as they work out a few bugs. However, if these issues aren't addressed in the near future it will likely have some unfavorable repercussions for Runic.

Other intriguing but less obvious additions include the high degree of modabbility allowed by Runic Games. The creators are passionate about allowing their customers to express themselves via the game and actively support player developed content. The layout of the game itself is also far more open. Without the confines of a downwardly spiralling mine shaft, players will find that the maps they are presented with contain considerable open space, something fans of Titan Quest may find especially enjoyable.

Torchlight 2 is a very enjoyable and highly addictive adventure well worth the potential, and hopefully temporary, frustrations occasionally associated with the online multiplayer. At only $14.95-$19.99 (USD) you'll definitely feel as though you got your money's worth while simultaneously lending your support to a small studio passionate about creating quality games.

**UPDATE: After several patches, the multiplayer (both LAN and internet based) has improved by leaps and bounds. Aside from the occasional, very infrequent disconnect the multiplayer is now highly stable and very enjoyable.