Posted by Kel
Gah, where's the pause button on this crazy thing? Seriously, the weeks are just blazing by and we're somehow already registering for events for Gen Con (good luck to everyone registering today!). Shameless plug: our panel is event ID SEM1571537! We'd love to see you if you're going to be attending Gen Con too!

Aside from Gen Con-ery, we have a bunch of fun goings-on that we'll be telling you all about in the not-so-distant future. We'll get to that soon though. For now, let's get down to the week in Geekdom. 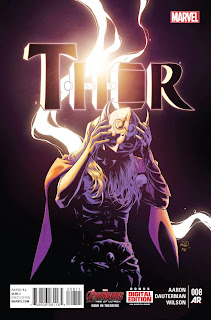 Arguably the single biggest bit of comics news this week was the long-awaited reveal of the true identity of the new reigning Thor.

Ever wish you could take a class about the history of superheros and comics taught by Stan Lee? Well, thanks to the Smithsonian, now you can (for free!).

If you were one of those intrepid nerds who ran out to see Mad Max: Fury Road and now can't get enough of it, there's good news for you. Vertigo will be collaborating with director George Miller on two projects inspired by the film (one of which is a four-issue comic series giving us the backstories of the protagonists).

This is perhaps the most immersive, impressive example of virtual reality gaming that we've seen to date.

On Friday, Blizzard enacted one of the largest player bans in the history of World of Warcraft in an effort to curb cheating.

The collapse of Japanese gamemaker Konami took another ugly turn this week when one of its most illustrious producers launched a Kickstarter to independently make what is essentially Castlevania.

Remember that time when Black Widow was excluded from all Age of Ultron merchandise? Well toymakers Hasbro and Mattel have taken the Widow-snubbing to a new level by erasing her what was arguably her biggest scene in the film.

Things have been a bit less erase-y for Supergirl, as we got this first look/teaser trailer for her upcoming series.


DC is more than doubling down on its small screen successes with this announcement that there will be an Arrow/Flash spinoff series titled Legends of Tomorrow.

After more than 20 years lending his voice to various citizens of Springfield, Harry Shearer left the cast of the Simpsons.

The reboot of Twin Peaks, which was on, and then off, is now on again.

The New Horizons probe has now spotted every one of Pluto's known moons and sent us back these images of the distant satellites.

Apple fans who'd been eagerly awaiting the release of HomeKit, Apple's home automation software, were disappointed this week when the company announced that the Kit will not be available until this fall at the earliest.

Scientists at the University of California at Santa Cruz have discovered what may be the first observed instance of a quadruple quasar (which provided the inspiration for a very appropriate name for the course nebula).

The moonfish, also called an opah, has been found to exhibit a surprising trait: warm blood.

MIT thinks it has a way to make undersea exploration more efficient: let the robots doing the exploring plot their own courses.

Is dark matter actually the key to the formation of life?

Professor Henk Jonkers has created what may revolutionize the construction industry: self-healing concrete.

The Large Hadron Collider has been a busy bee since it was turned back on earlier this year. It's latest bit of work? Just finding a type of particle decay that's even more rare than the Higgs boson.

There are going to be seven, count 'em, seven version of Windows 10 when it's released later this year. Which version is right for you? Forbes has provided us with this handy guide to answer that question.

Check out this astoundingly beautiful photo essay of a Guatamalan volcano eruption.

Oh look, it's a katana that was forged from a four billion year old meteorite.