Posted by Kel
It’s been little while since we last featured a book on here and, as we mentioned last week, we’re gung ho to bring more topical diversity your way. Woot! As an added bonus, this review builds upon the couplet of posts we featured last winter that introduced us to the lush fantasy world of Theranis. Author Amelia Smith brings us the next chapter of her Anamat quintilogy, Priestess of the Dragon’s Temple. 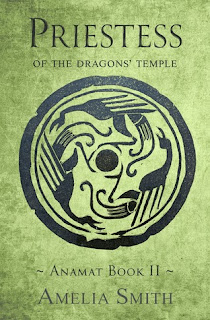 Before we go any further, if you haven’t read Scrapplings, the first book in the aforementioned series, then you’ll need to do so if you want to make sense of Priestess of the Dragon’s Temple. The Anamat books are designed to be one continuous narrative, so it’s not a series you can jump into en media res.

And en media res is exactly how Priestess begins, picking up the action from the very minute that Scrapplings left off. Three of the titular scrapplings: the cantankerous Darna, the hypersensitive Myril, and the otherworldly Iola, have left the behind their streetbound begging and become novices in the Temple at Ara’s Landing, the foremost of the houses of worship dedicated to the dragons of Theranis. While the Temple offers stability in the form of reliable food and shelter, only Iola actively sought to serve in it, so it takes on more of an imprisoning role for Myril and especially Darna.

The narrative then jumps forward four years and we learn of what goes into the making of a priestess largely via inference (though we do get some critical insights into what comprises the cult of dragon worship). Instead, we’re thrust into the heart of what it means to be a human messenger to the dragons and, of equal importance, the political implications that the role entails in mortal human realm. The relationship that humanity has with the dragons is revealed to be even more tenunous than what was implied in Scrapplings, with the dragons displaying outright hostility towards their constituents at various intervals. The majority of humanity, however, has only a bare comprehension of the precariousness of their existence. There’s more than a bit of the “out with the old gods and in with the new, foreign ones” dynamic in play and the tension resulting from this is overlaid with additional complications rising from what had been considered traditional gender relations in the land of Theranis. It’s a feeling that fans of the Mists of Avalon will find familiar: a matriarchal clergy class losing power due to patriarchal outside influence. It’s a tension that’s underscored by the manner in which worship of the dragons occurs: via ritual sex.

The trio of new priestesses take to their vocation in manners as disparate as their personalities. Iola revels in the role that she feels she was born to play, Darna gripes that she is no true holy woman, and Myril struggles with the aftereffects of an ecstatic trance that leaves her catatonic in the days immediately following her initiation. The days that follow leave all three girls questioning whether the clergical life is actually the right place for them.

The girls have little time to acclimate themselves to their duties before they become privy to new layers of intrigue. The ambassadress, a priestess of rare talent selected to act as the literal messenger of humanity and live among the dragons for six months at a time, returns from her latest sojourn in a desperate state. Not only is it clear that the dragons are displeased, but it’s doubtful that the ambassadress will be physically and psychically able to make the trip the following year. The situation is complicated further by the fact that the Governor, the head of secular power in Theranis and the individual who would appoint a new ambassadress, lies close to death. Selecting successors to both of these roles is a highly political process where raw ambitions appear to outweigh actual ability. The majority of the book deals with the selection process, the corruption that runs rampant through both secular and spiritual life in Theranis, and, as mentioned, the respective tales of self-discovery for Darna, Iola, and Myril.

Priestess deals with these elements in a manner similar to what we saw in Scrapplings, that is to say a piece that can appeal to adults but also function as a work of young adult fiction. While it’s an interesting text, seasoned fantasy readers may find some plot points and the development of some, though certainly not all, characters to be a bit too neat and tidy. Another item that readers may want to keep in mind is that Priestess, like Scrapplings, is one chapter in what is meant to be a series of five books, so it helps to temper expectations knowing that this is part of a much larger story. As such, we get a lot of exposition, but more than a few mysteries will persist by the time the last page is turned.

And Priestess does an excellent job of both expanding the world of Theranis (in itself something of a feat given that the vast majority of the tale centers around life in the Temple) and building the central narrative. The book builds to a mighty crescendo that, even if some of the events therein were largely known quantities, the resulting cliffhanger will likely urge you on to the next chapter if you've found yourself won over by the series.

Priestess of the Dragon's Temple is available via Amazon as well as through a handful of other channels listed here on Amelia's website.